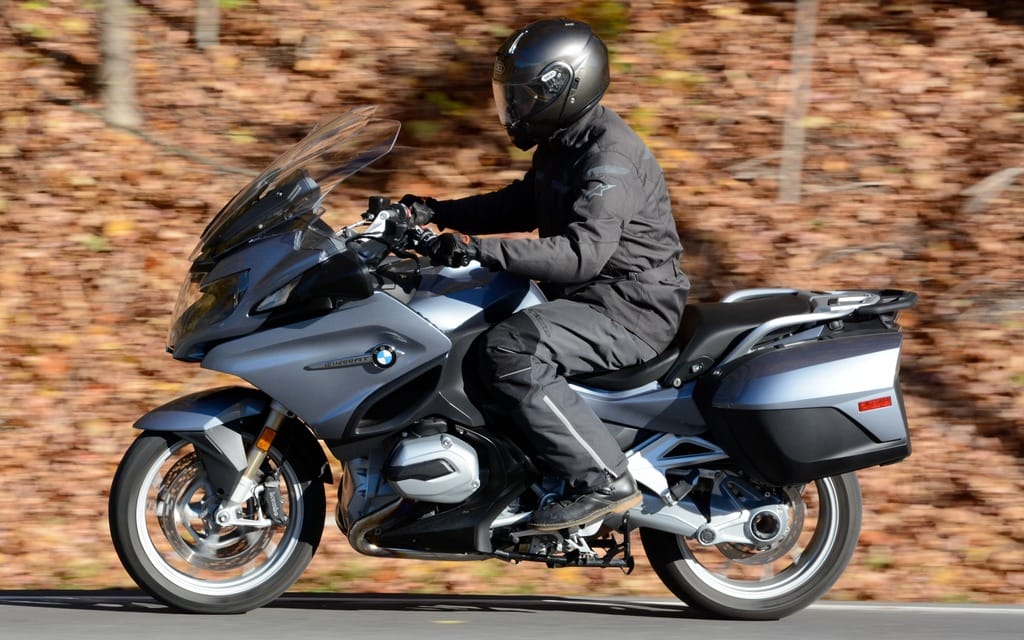 When it comes to luxurious touring mounts, BMW has a full stable. There’s the top-of-the-line all-inclusive K1600GTL Exclusive and the (slightly) down-spec K1600GTL. And don’t forget about the base K1600GT, which gives you the snappy inline six and a little less luxury for a little less money.

But then there’s the odd-man-out R1200RT – with its transverse flat twin the traditionalist’s choice and the least expensive of the bunch. They’re all quality bikes, but they certainly don’t come cheap, with prices ranging from just under $21,000 to just over $33,000. But does shelling out more money necessarily mean you’re getting a more capable motorcycle? After a 2014 Fall Tour to Delaware and back on the R1200RT, we’re inclined to say no.

First off, let’s consider the touring aspect of luxury touring – for which the main ingredient is luggage capacity. The RT comes standard with sensibly sized hard saddlebags. They’re the same as those on the GT and GTL, right down to the concave indentations on their bottoms to make room for dual mufflers (unlike the six-cylinder models, the RT has a single raspy can on the right side). Within the RT saddlebags there’s room for enough gear for one man to spend a week on the road, or longer, even, if you’re unconcerned with respectable hygiene. If you’re considering an RT but feel the need for more space – to bring your own hair dryer, perhaps – and are drawn to the packing possibilities of the GTL’s cavernous top case, fear not; a similarly sized unit is available as an RT accessory, and is said to swallow two full-face helmets or one petite hair stylist. We suggest the latter.

Luggage capacity is meaningless without the muscle to haul it down the road. To accomplish this the R1200RT is powered by the latest generation boxer engine. It’s the same 1,170 cc air- and liquid- cooled unit (air-cooled cylinders, liquid-cooled heads) as the R1200GS, though in the RT it receives a heavier flywheel and more powerful alternator. While it may lack the outright surge of BMW’s inline six, the mill’s claimed 125 hp and 92 lb-ft of torque provide plenty of oomph for some serious speed and sporting potential.

Our RT’s optional Shift Assistant Pro increases that potential. It allows up- and downshifts through the six-speed transmission without the use of the clutch, and it’s great fun on Pennsylvania’s twisties – if you’re absolutely ripping, that is. While shifting at partial throttle, however, it’s prone to lurching, and given that the RT is a touring mount and that few owners will be gunning for pole position, we think it’s an unnecessary addition. It’s not as if the clutch pull on the RT is tiring, and there’s no need to flog the engine to make hay.

The R1200RT’s central screen displays everything you might want to know and some things you wish you didn’t – like an ambient temperature of -3ºC one morning – and is navigated using the same switches and thumb roller setup as the GTL models. The system is as intuitive as they come, and once mastered allows easy manipulation of riding modes (Rain, Road, and the optional Dynamic). Progress is important, but so is style; handsome analogue speedo and tach gauges reside on either side of the screen.

Long-range capability is pointless if you’re not comfortable – but don’t worry, the R1200RT’s got you covered. Seating position is relaxed and upright, and the RT’s handlebar feels slightly wider and flatter than that of its six-cylinder cousins, resulting in less of a sit-up-and-beg posture. Our testers are all fairly tall, and each finds his legs a bit cramped, but for riders of smaller stature the fit should be fine. And while we may complain about seat-to-pegs space, no one is grumbling about the seat’s relationship with the rider’s posterior. It’s broad, well padded, and – thank the gods – heated (just like the rider’s posterior). Every time we emerge from a warm restaurant into the chilly October air we each covetously eye the RT’s bun warmer. The standard seat is adjustable between two settings (805 and 825 mm).

Part of what makes a motorcycle luxurious is its smoothness. The RT’s Telelever front end and Paralever rear combine for a sweetly supple ride, the base settings of which Dynamic ESA allows us to alter (soft, normal, and hard spring rates). And though not long after the RT was released last spring a recall was issued for bikes fitted with Dynamic ESA (a potential problem with the rear spring strut), BMW staffers assure us the defect is rectified. During the Fall Tour we experience no issues, the system functioning flawlessly.

Likewise, ABS functions as it should – which James Nixon finds out when a bear runs across the road. He’s following Neil Graham, and Graham almost becomes a hood ornament, as the Nixon-piloted BMW is slow to react. But brake pads squeezed by powerful calipers and modulated by German electronics slow the beast (the bike, not the bear) down from speed. Though the RT is heavy, it’s actually 58 kg lighter than the K1600GT and a whopping 86 kg lighter than the GTL Exclusive. It’s also better balanced and not nearly as top heavy, making it more agile, too.

The R1200RT can match or exceed the six-bangers in touring capability and ride quality, and it has two factors that make it more alluring than the sixes. For one, there’s the fairing, which Graham referred to as the “quietest, most wind-cheating fairing in motorcycling history” (CC June 2014). It provides a pocket of calm in a turbulent world, with just a taste of wind teasing the rider’s verges while the cusp of a cleverly cupped windshield (which is electronically adjustable) allows a clear view of the road ahead. Truly, its effectiveness is uncanny, and it’s a better shield than the K1600’s.

Secondly, there’s the price. The base R1200RT is $20,900. But BMW offers options packages to mitigate the expense of outfitting the bike. As well, individual options are available in addition to the packages, which allow further fine-tuning of the RT. A fully loaded K1600GTL Exclusive is $33,400; you could add lots of bells and whistles to an RT with the $12,500 difference. Price concerns aside, the RT’s fairing will always tip the scales in its favour. Unless you’re absolutely smitten with the inline six, the R1200RT is the better bet.