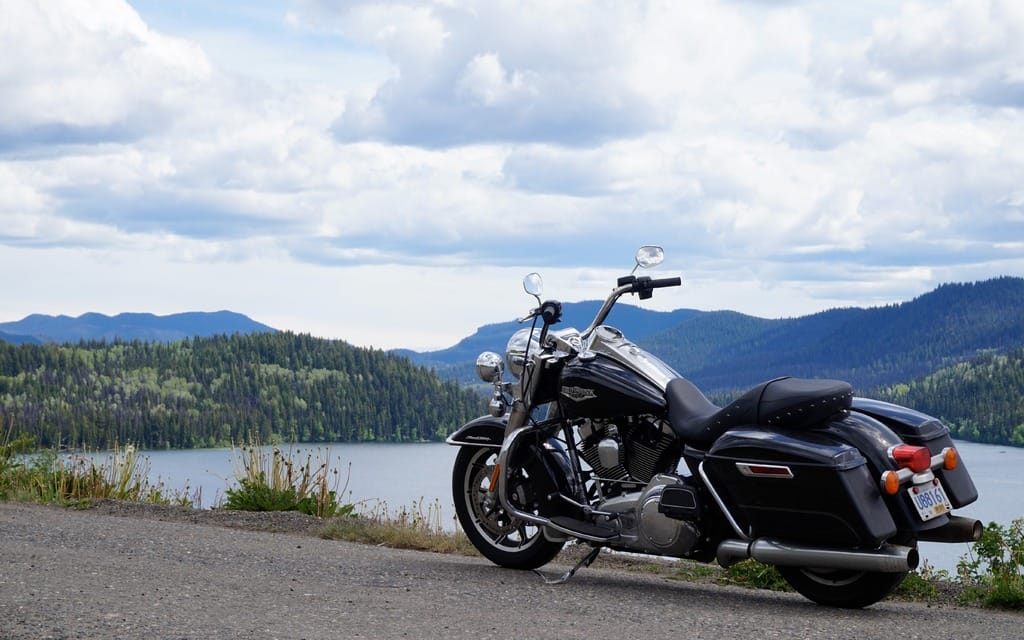 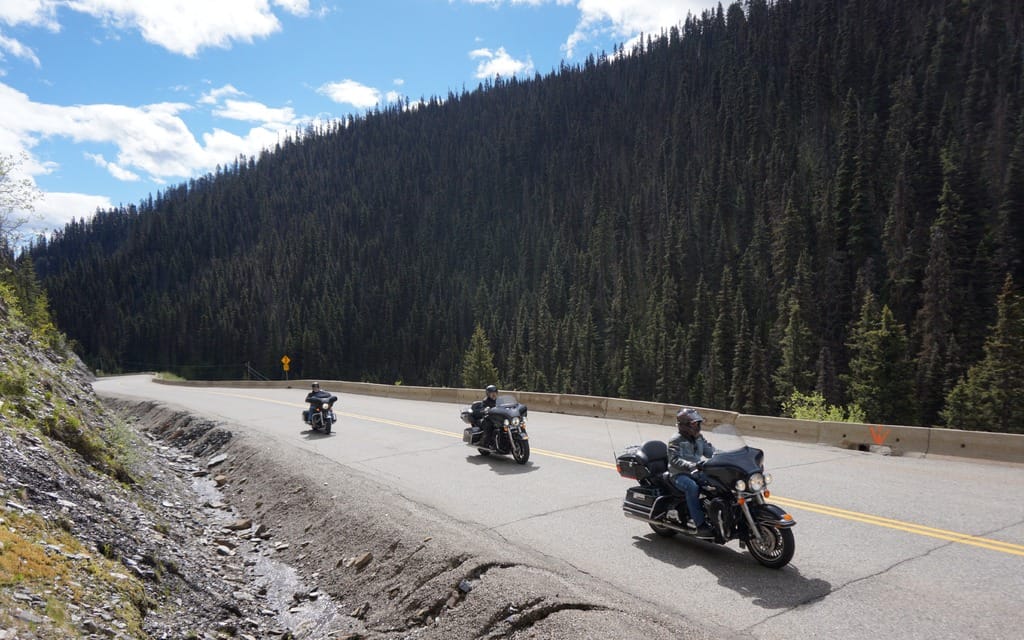 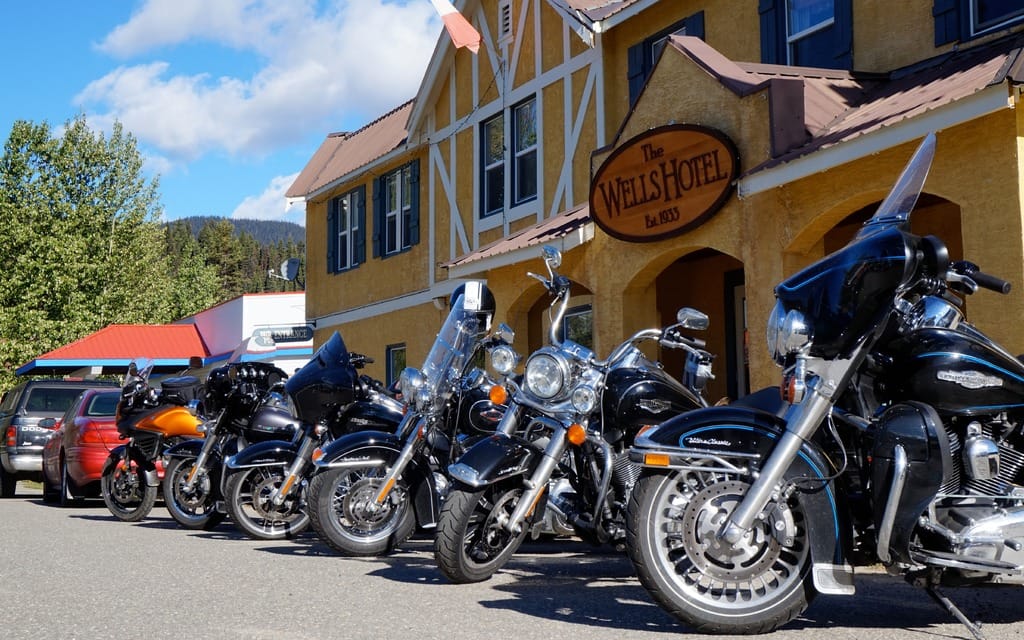 Six days in B.C. and Alberta has the virginal James Nixon – still in his 20s – planning his retirement. Roads through the mountains will do that to a young man

Up ahead, rising to greet our five Harley-Davidsons as we grumble into Prince George, British Columbia, I see an apparition. A massive wooden man with “PG” emblazoned on his barrel chest stands motionless at the junction of highways 97 and 16, one hand propped jauntily on his hip while the other holds aloft a Canadian flag. After pulling into the hotel parking lot and dismounting, I look searchingly from face to face. “You guys saw that giant peg-man too, right?” They (another Canadian, Robert the Texan, and ze Germans Daniel and Martin) say yes, they saw it too. Satisfied I wasn’t hallucinating, I unpack the Road King.

Our mileage isn’t major, but each day of the trip is filled with activity. Especially our time on the tourist trail that is the Icefields Parkway, which sees us make stops at Lake Louise and other major attractions. The Parkway is stunningly beautiful (how could it not be, traversing the rugged Rocky Mountains?) but also abundantly busy. After a night in Jasper, Alberta, I’m happy to leave the crowds behind.

The weather is warm, the highway wending and our pace languorous (I almost nod off at one point) as we cover the 375 km to Prince George — which helps explain my stupor as we arrive. After seeing Peg-man, it’s a day I refer to as “the slog to the log.” I’m tired, irritable, and just want to sleep, but there’s a dinner reservation at Nancy O’s to keep.

It’s amazing how quickly a pretty girl can perk you up. I spot her immediately, a lovely young blonde at a corner table. And — what luck! — our table is adjoining. I slip onto the wall-side bench and start sliding down towards her, but before I get there I bump into someone. Daniel, the sneak, has slipped in at the other side and stolen the seat. I stare at him in silent exasperation, my expression translating into any language as, “What the hell, man?” He smiles sweetly. I feel a tap on my other shoulder. It’s Martin. He shakes his head sadly and says, “Too slow, Benjamin.” (Benjamin, you’ll recall, is a German term of endearment for the youngest, least experienced member of a group.) Looking back to my left I see that Daniel, the epitome of German efficiency, has already contrived a conversation with the young miss. The night’s not a total write-off though, as the outstanding four-piece band High Society entertains with an eclectic fusion of rock, blues, soul and jazz. Martin, meanwhile, entertains with deranged gyrations on the dance floor. “I love jazz,” he blurts breathlessly between sets. This free-spirited side of the normally subdued Stuttgarter is shocking.

I sleep in the next day, and while normally this would result in a frantic rush to get ready I’m calm as I pack my gear. Last night I told the lads to leave without me in the morning, I’d be lagging behind. There’s an entire day to cover the 200 km to our next destination; I savour the lack of urgency. After a coffee at Zoe’s Java House, a leisurely stroll through Cottonwood Island Park and a close inspection of Peg-man, I steer the Road King south on 97.

Though I don’t need to make time, my pace quickens heading towards Quesnel (the operative phrase being my pace, which isn’t so much quickening as returning to normal). Maybe I’m selfish, but I derive more satisfaction from motorcycling solo — or perhaps with another rider of similar speed — than from group riding (no worrying about whether everyone made that light or who has the pluck to pass that pickup). A spirited blast on the big, burly Road King is reinvigorating, and the sound of scraping footboards reverberates through the esses of Highway 26 on the way to Wells.

Later, after reconvening at the Hubs Motel, we head to the Wells Hotel Pub for a nightcap. (It’s a likely destination; the Wells Hotel website claims they stock over 100 varieties of Scotch.) I’m hoping to wind up next to a buxom mountain beauty (some recompense is owed me, surely, for Daniel snaking my seat the night before), but instead find myself beside a willowy, windswept fellow named Jason. He has the look of a man who’s been by himself in the woods for too long. As it happens, he has, having spent the last two weeks camping alone in the area. “I’ve been panning for gold,” he says with such seriousness that I dare not smile. “Don’t trust the banks, man,” he continues without preamble. While I struggle to piece those two statements together he’s already moved on to the conspiracies of 9/11 and Santa Claus. My head is swimming, and it’s not from the Scotch. Time to call it a night.

The final day of the trip is also the farthest, about 500 km from Wells to Kamloops. We head west on 26, then south on 97 through Quesnel, Kersley, Williams Lake and Lac la Hache. We’re weary and weathered while refueling at 100 Mile House — with the exception of Al Perrett, the seemingly tireless 76-year-old owner of Kamloops Harley-Davidson (supplier of the bikes for the trip through the EagleRider rental outlet housed in the same facility). He’s been following in a chase truck, and while we top up the tanks he compares a map with our itinerary. “I think this way will be nicer,” he says, tracing his finger across from Lone Butte to Little Fort, then down to Kamloops.

As is often the case, locals know best; Al’s alternate route heading east on Highway 24 gets an A-plus. The road swings gently past Sheridan Lake, Bridge Lake and Lac des Roches (24 is aptly named the “Interlakes Highway”) before beginning a snaking descent into the North Thompson River valley. I’m whooping with each bend and beaming when we reach the stop sign at the Southern Yellowhead Highway.

We turn south and make our way to the McLure crossing, which uses a reaction ferry to transport people and vehicles across the river. An overhead cable is strung between towers on either bank, to which a “traveller” is attached. The ferry is connected to the traveller by a bridle cable. Rudders are used to angle the pontoons into the current, the force of which then pushes the ferry across the river. It’s ingenious, and there’s beauty in its sophisticated simplicity. The ferry provides a peaceful change of pace from riding as we quietly cut through the water.

Al assures us it’s not much farther as we continue south on Westside Barriere Road. I’m anticipating a comfortable cruise for the home stretch, but the road rapidly begins roughening and a series of bottom-outs leaves my lower back lamenting the Road King’s limited rear suspension travel. Our pace slows considerably while we weave along pavement sprinkled with potholes, but despite our best efforts the bikes still take a beating. Perhaps it’s normal to treat rentals more roughly than you would your own bike — but you probably wouldn’t do so in front of the man who owns them. (I take solace in the fact that Al himself suggested this road.) Eventually the surface becomes smooth enough for a spirited return to Kamloops.

After six days and almost 2,000 km, we’re back where we began, and the final day’s impromptu decision to change course brings home the beauty of riding in B.C. Basically, any road you ride is a good one and close scrutiny of a map uncovers a spiderweb of squiggly lines. It’s a Canadian Mecca for motorcyclists, the roads like manna from heaven for an eastern flatlander. Six days here is not enough; it’s time to start planning my retirement.