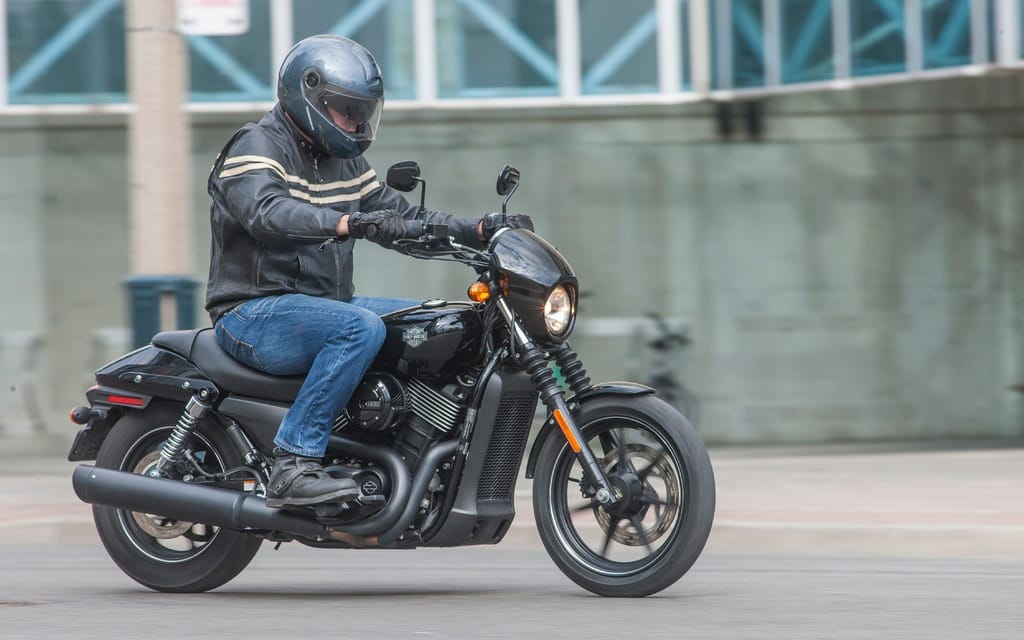 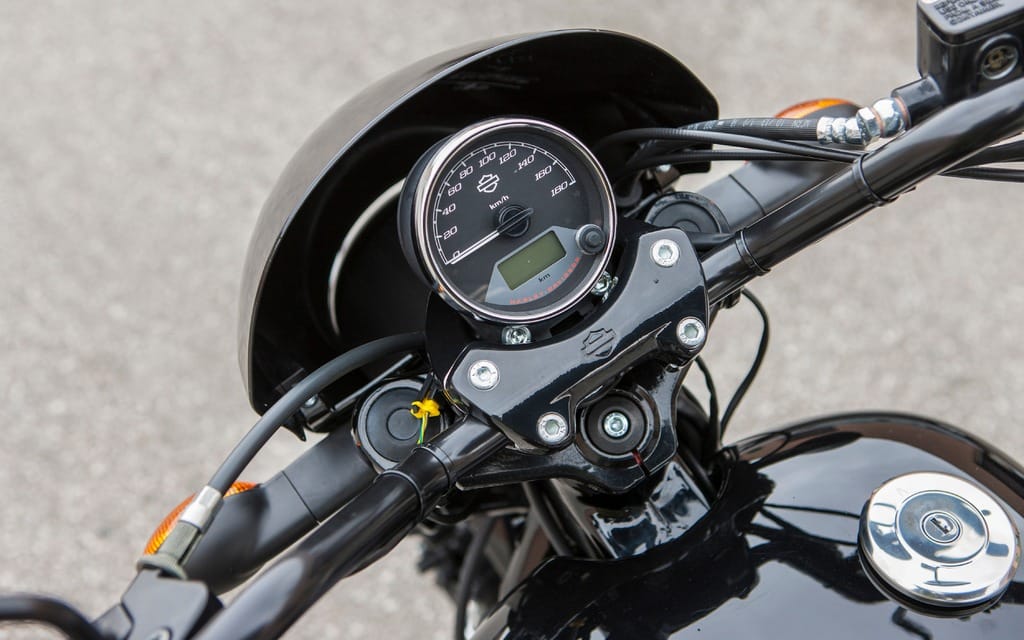 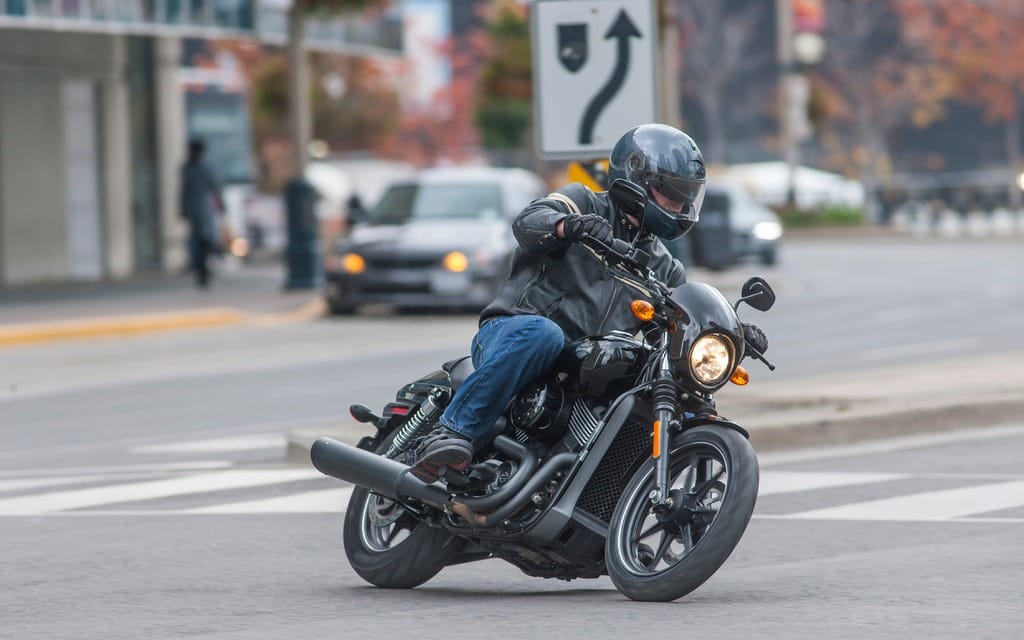 Change, at the Harley-Davidson Motor Company, only occurs when the Harley-Davidson Motor Company is ready for change. It’s been the brand’s most enduring — and endearing — characteristic. The Japanese or the Europeans may run willy-nilly after one or another market segment, but Harley does not. Harley does not come to you. You go to Harley. It’s an approach that has made it one of the most coveted and powerful brands in existence, inside and outside of motorcycling.

When Harley does decide to come out with a new engine platform, the consternation amongst the faithful is hysterical. We’ve overheard heated arguments (while slinking around winter motorcycle shows) where HD-logo-festooned loyalists have argued with booth staffers that camshafts shall not be mounted overtop a cylinder head. To do such a thing with a camshaft would be to denigrate its elders (Grandma Panhead, Uncle Shovelhead). Even now, many years after its release, the Harley-Davidson V-Rod, despite having one of the very best engines in all of motorcycling, isn’t readily accepted by rank-and-file Harley enthusiasts. It’s very odd, and vaguely depressing. An engine like the V-Rod’s, coming from a bound-by-tradition company like Harley-Davidson, should be cause for celebration. There should be V-Rod-Daze in Milwaukee every summer and V-Rod tattoos nestled beside POW/MIA tattoos on the hairy shoulders of men downing Buds in sleazy biker bars. But it isn’t so.

When Harley-Davidson’s Street was unveiled at EICMA in the fall of 2013, we were intrigued. It was the firm’s first all-new platform since the — you guessed it — V-Rod. The specifications were tantalizing: a liquid-cooled V-twin with overhead cams in what was to be an inexpensive motorcycle. More interesting than the spec sheet was the bike’s intended scope — this was to be Harley-Davidson’s first world bike — while the Street would be sold in Western markets, it was not designed for Western markets. The Street’s goal is nothing less than to expose the greater motorcycling world to the Harley-Davidson Motor Company.

As its name suggests, it’s a motorcycle unashamedly aimed at an urban market (designed “for streets and urban environments,” says Mark-Hans Richer, Harley-Davidson’s senior vice-president and chief marketing officer). With the Street set to hit Canadian streets in the spring, we sneak in an end-of-season ride around the metropolis on an early-release 2015 tester.

While the 749 cc twin (which has, as with much of H-D proprietary technology, a catchy name: Revolution X) isn’t in the same realm as the delectable V-Rod mill, it’s further proof that Harley is entirely capable of designing and building a thoroughly modern engine. The Street has plenty of pep for scooting through traffic, and with a linear torque curve that peaks at a respectable (claimed) 44.5 lb-ft, the pull throughout its midrange is impressive. And, of equal importance, the Street has a throaty snarl from its long two-into-one blacked-out muffler. It’s not the sound of a classic 45-degree air-cooled Harley V-twin, but there’s an aural lineage that unites all of Harley’s engines (including the V-Rod, the best-sounding of the bunch). Frank Savage, Harley’s senior manager of styling, says the Street has “the spirit of a Harley-Davidson.” In its sound, at least, we agree.

Clutch pull is light and the low (709 mm) seat broad and sufficiently padded. And while the Street isn’t svelte (steel frame, tank, and fenders contribute to its 222 kg) its weight is low and balanced, making it feel surprisingly small and maneuverable. Shifting is precise through its six-speed gearbox, though it slips from second into neutral several times. The suspension is low-spec but adequate; a non-adjustable 37 mm fork and twin shocks (adjustable for spring preload) do their best to preserve your buttocks from the worst of the city’s infrastructure failings, but with only 89.5 mm of travel, we suggest deft pothole navigation.

The Street has a more-upright-than-most-cruisers riding position, but forward-mounted footpegs still load weight on the rider’s tailbone. The handlebar is within a comfortable reach, especially good news if you’re of average stature or smaller. (If you’re of bigger-than-average build, however, the Street may feel a little cramped.)

The Street is also appealing in its stark simplicity. Controls are as straightforward as they come: starter and kill switch on the right switchblock, and high beam, horn, and turn signal on the left. (Harley has forgone its split right/left turn signal system in favour of a traditional one-button setup for the Street.) Inside the small, café racer-inspired front fairing sits a simple circular instrument nacelle split between an analogue speedo above and small LCD screen below. What more do you need? Since you asked, and because the city is suffused with crazed cab drivers and hung-over e-bikers, we’d like a good set of brakes. Two-piston calipers act upon one-per-end rotors (292 mm front, 260 mm rear) but stopping power is poor. Initial bite from the front brake is feeble, while the rear brake lever is mushy and doesn’t engage until late in its arc. ABS isn’t available, not even as an option.

Disconcertingly, the starter was occasionally reluctant to fire the engine. Resetting the kill switch and turning the ignition off and back on worked some of the time, but not always, and there were times when it took five or six attempts to start the bike. Querying Harley, we received this response: “Based on the symptoms you describe it could be a weakened battery, as there are no known issues with the ignition system. An authorized Harley-Davidson retailer would be capable of assessing and resolving the issue.”

Mechanical issues aside, the Street’s main shortcoming was unexpected — the fit and finish are poorer than expected. A stroll around the Street reveals disappointing attention to detail; there are long strands of exposed wiring on the handlebar and horn, for example, and the rubber fork gaiters, while imparting a retro flare, were beginning to colour-fade. It’s doubly disappointing because an incredibly high level of fit and finish — impeccable paint and powder coating and chrome so shiny it can double as a shaving mirror — is a Harley-Davidson hallmark.

While it’s true that some Street production is assembled at Harley’s facility in Bawal, India (Indian factories sometimes take time to achieve the production standards that we’ve become accustomed to in the West), the North American market is supplied by a factory in Kansas City, Missouri. It’s important to remember that the $8,999 Street is a budget bike (the 494 cc Street 500, at $8,199, even more so). But “budget” in the marketplace isn’t synonymous with substandard; a Yamaha Bolt costs the same as the Street 750 and is finished to a higher standard. The most significant difference between the Bolt and the Street is there on the tank for all to see: one is a Harley-Davidson and one is not.

The Japanese, the Europeans, and even other American brands have, forever, been attempting to bottle a Harley’s essence. Some brands (you know who you are) have stared for so long at pictures of Panheads and Shovelheads that their bikes are so eerily similar in proportion and line and finish that they’re nearly copyright infringements. But the Street appears awkward, like a Japanese translation of a deep-South dialect. Whereas the V-Rod got it exactly right — no power cruiser from any brand will ever exude the V-Rod’s aesthetic and mechanical rightness — the Street doesn’t communicate the brand’s historically faultless knack for releasing motorcycles that are exquisitely eye-able.

No brand (with the possible exception of Triumph in its 1950s and ’60s prime) has ever positioned a fuel tank as exquisitely on top of an engine as Harley-Davidson. Even the prototype electric Harley is nothing less than the best-looking electric motorcycle to date. This is a company with an excess of capable, gifted designers. How then do you explain the Street’s awkward fuel tank, which doesn’t appear seated at the rear? Or the thick tail section that only serves to exacerbate the front end’s thinness? Or the bulbous headlight fairing that concentrates visual mass too high? Or the “fins” machined into the flanks of the engine’s cylinders that serve no purpose other than to apologize for the inclusion of liquid cooling?

It will be interesting to watch the Street’s progress across the world’s markets. It can be argued that any motorcycle at a reasonable price with the hallowed bar-and-shield on the tank will succeed. And this may well be the case. We believe that the Street is a valiant but flawed first step out of Harley’s comfort zone. We also believe that Harley’s next effort at a world bike will be much closer to the mark — the company is simply too savvy to let a misstep trip them up them for long.