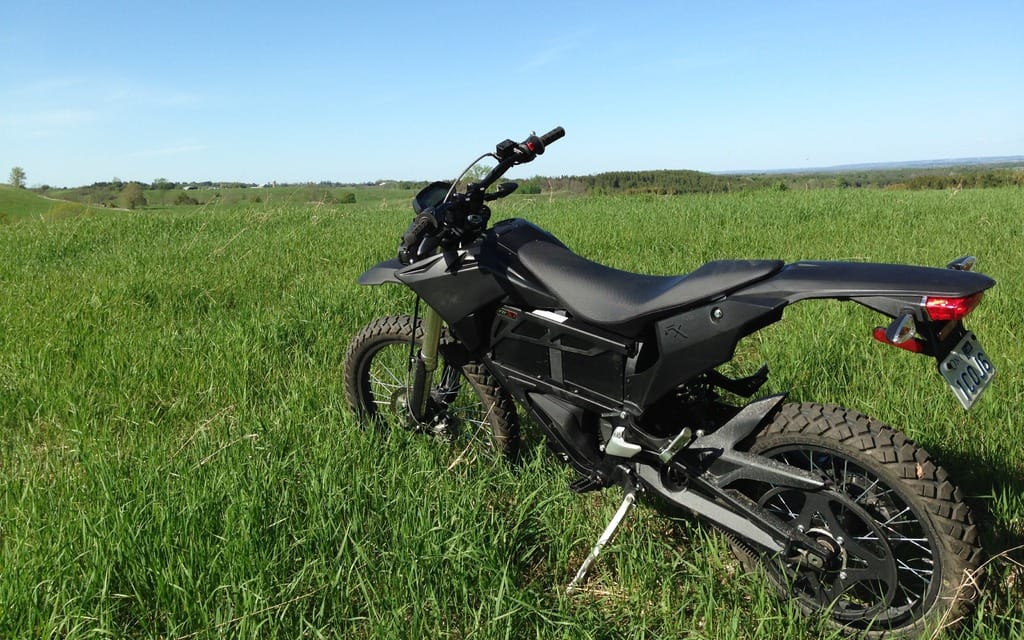 For an off-road enthusiast, living close to trails usually provokes the ire of neighbours and pursuit by police when you don’t feel like loading up the bike trailer. It’s not that I like startling animals or shattering the silence with a high-strung motocross bike, it’s just that only a real dirt bike offers the performance you need to hop over rocks, dodge trees and occasionally launch into the blue from a well-placed jump. After years of avoiding cops and apologizing for my noisy escapades, I found the answer in the Zero electric motorcycle.

The Zero FX is built on a motocross frame but is totally street legal. Unlike a traditional bike, there is no spark plug, air filter, cooling or exhaust system, no clutch, oil, gearbox, chain and sprockets or fuel system to clean or repair. The bike is heavier than my CR250, but the torque is 70 lb-ft from a dead stop so the FX loves to wheelie and roost. (Whenever another rider tries it I get a new strip of dirt where my lawn used to be.) The motor sends 44 hp to the rear wheel via a timing-belt for low friction and virtually no noise. Blasting through the forest, all you hear is the wind, a subtle whine, and the chirping of birds.

With a top speed of 135 km/h, and with a 0–100 km/h time of four seconds, it will leap ahead of many bikes when the lights go green. As it only covers 40 or 50 km at highway speeds, I didn’t buy it as a long-haul commuter. Range improves to between 70 and 100 km in the city or on the trails. It comes with a power cord inside the swing-arm that allows recharging at any standard 110V outlet in about seven hours, and it has a fully adjustable shock and inverted 43 mm fork with appropriately off-road-sized rims (21-inch front, 18-inch rear).

Climbing a steep hill in the woods, I got boxed in with downed trees on all sides, a situation that would typically require well-coordinated throttle and clutch control to get out of without digging a hole or turning around. Even at a stall, the FX could easily be pitched from side to side and made to deliver the kind of maneuverability usually found on trials bikes. Despite the mud and abuse, it didn’t overheat and took a post-ride power washing without a shower of sparks. My previous 600 cc enduro was slow as a street bike and heavy as a dirt bike, but the Zero FX does a fantastic job at both. A button beside the throttle lets you choose between sport, eco, and custom power modes. Custom allows you to adjust torque, speed, and regeneration parameters, or see more detailed drive stats on your smartphone. With regeneration set to maximum, the bike slows considerably when you back off the throttle and/or touch the brakes, as this turns the motor into a generator recharging the batteries.

My throttle and shifting cues have traditionally been triggered by the sound of the engine plateauing in the rev range, the back tire only catching up to the ground just when it’s time to shift again. Before, the gear I was in as much as by how fast I was flying past trees gave the sensation of speed. Without gears to shift, throttle position is everything on this bike. The FX is way too fun to simply pin and hold onto while it digs furrows across the yard. But exactly how fast is that rear tire spinning? In just a few seconds it’s close to highway speeds and the wheel is of little help holding it upright as the rear swings around. Road racers have an excellent sense of throttle control, but it hasn’t been an important skill of mine until now. The rear will easily spin-up when accelerating out of a turn on pavement, so you can’t be heavy handed there either.

I’m still getting used to its lack of noise, but so far the FX has been an absolute riot. Anyone getting off it has a grin from ear to ear — and a lot more respect for its capabilities. Maybe I’ll stick some playing cards in the spokes for more acoustic feedback. Maybe I’ll get a nice sharp pair of knobbies to really let it hook up on the trails. Whatever I do though, I’ve got to pick up more grass seed.