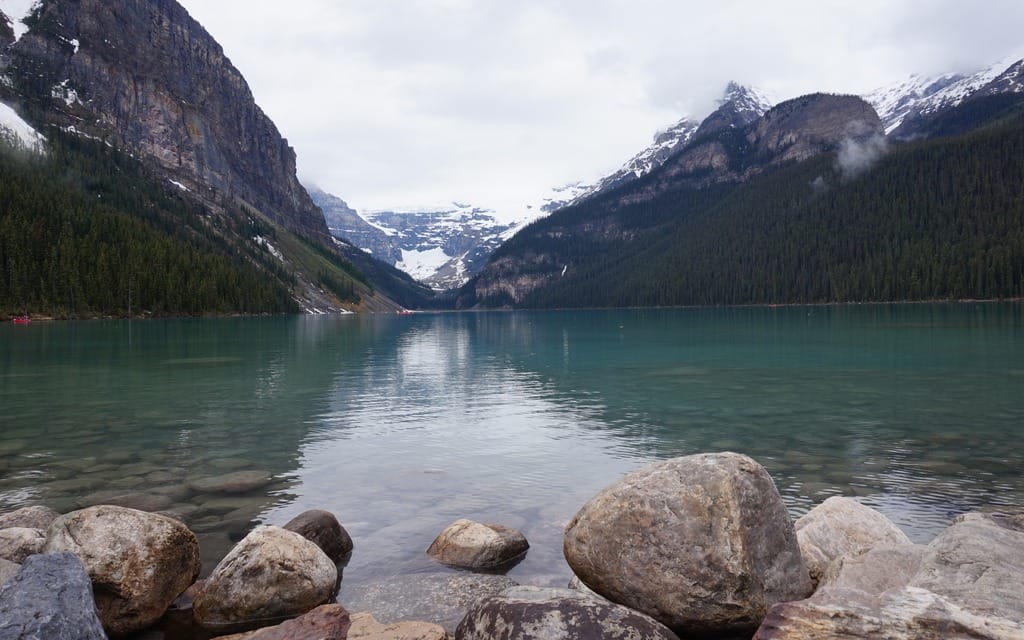 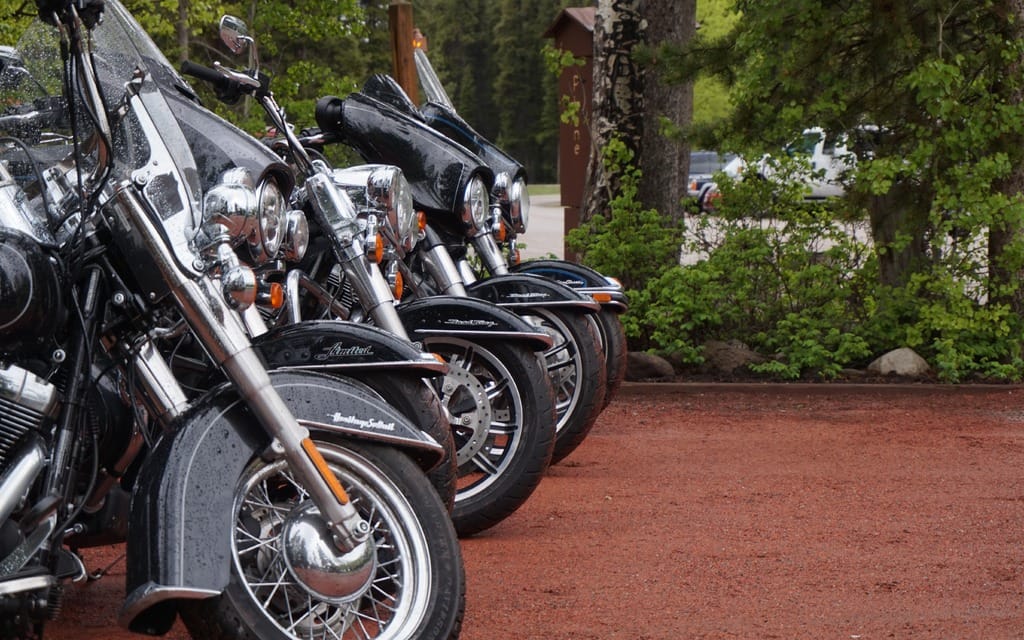 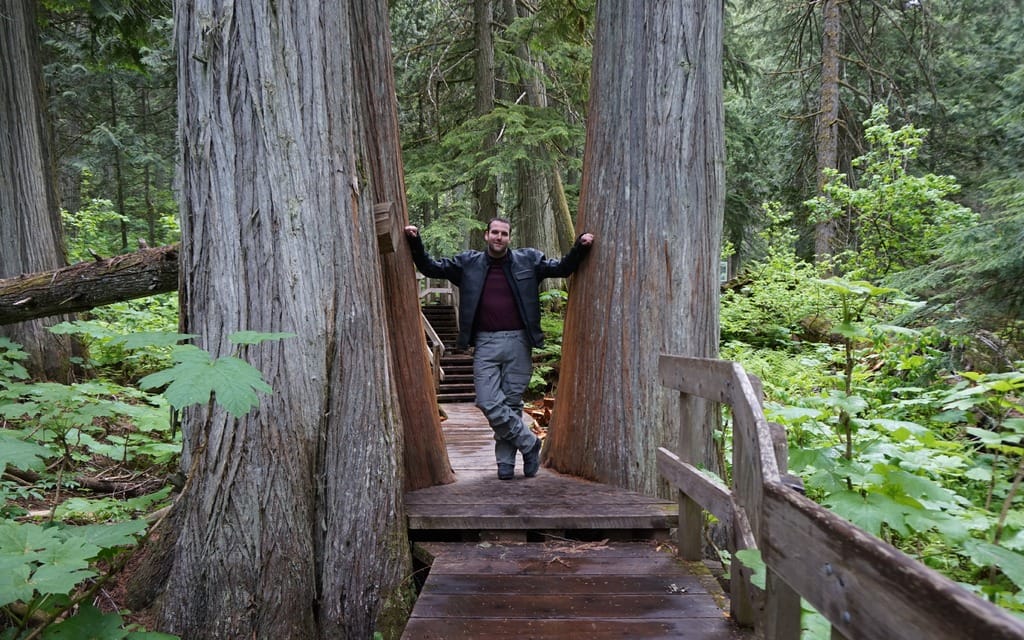 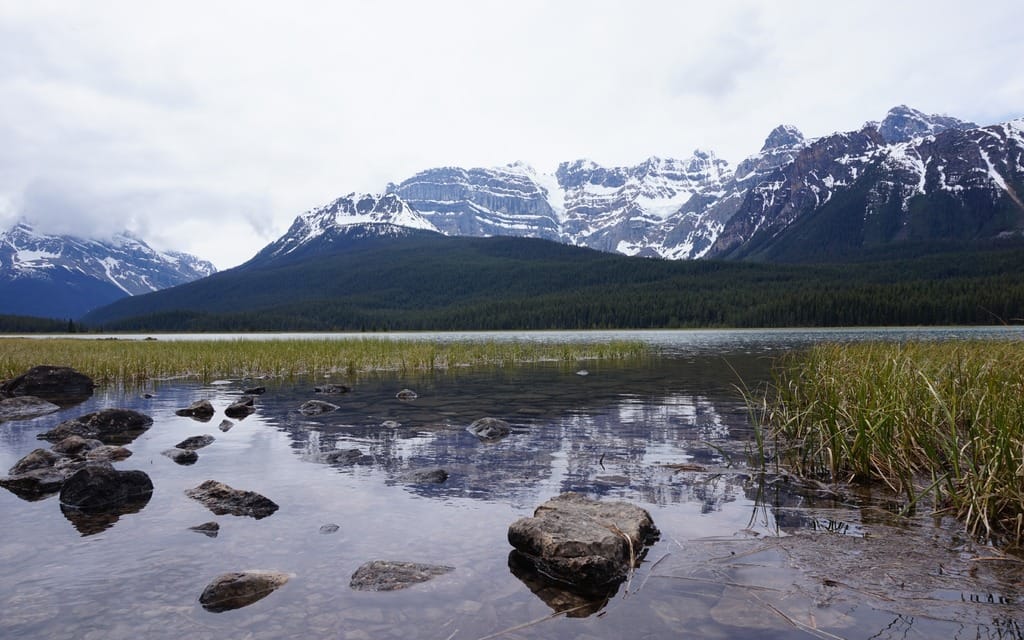 Of Mountains and Men

A trip through the Rockies cools down

We (me, another Canadian, and Robert from Texas) pull into a parking lot in Lake Louise, Alberta — at least, I think that’s where we are. My visor keeps fogging, and even with it open it’s difficult to read signs shrouded in mist. As I come to a stop and put my foot down my body buckles and I almost drop the bike. It’s not due to the Harley-Davidson Road King’s heft, it’s because I can hardly feel my legs. They’re cramped and uncooperative after being clamped on the tank for the last hour in a vain attempt to conserve heat. I extend the sidestand after three fumbling attempts, peel myself slowly from the bike, flex my fingers and toes, and grimly savour the pins and needles flooding my extremities. It’s cold, wet, and getting dark — and we still have to find the hotel. Why did we leave so late? Oh yeah, that damn dam.

Despite our hopes, delaying departure earlier in the day until after a tour of the Revelstoke Dam does not result in clear skies. Weather in the mountains is changeable, and forecasts usually wrong. Continuing east on Highway 1, it’s not long before slow, heavy raindrops start falling and I’m cursing myself for forgetting waterproof gloves. (Lesson learned: always bring waterproof gloves.) Wet gloves alone are an uncomfortable inconvenience, but dropping temperatures and the Road King’s lack of heated grips worry me. As we wend our way up through the Columbia Mountains the mercury drops, the sign for Canyon Hot Springs passing like a cruel joke. We pause at Rogers Pass. Thankfully, so does the precipitation. We dismount and look around but there’s not much to see; the peaks are hidden in clouds and all that’s visible are ranks of conifers marching up into oblivion. I remove moist gloves and try to blow some warmth back into quickly chilling palms. It’s five degrees Celsius.

We continue east and the rain resumes but isn’t relentless — though when it does fall it’s punishing. And, being the purist (or masochist) that I am, I had the Road King’s windshield removed at the start of the trip. No protected pocket of air for me. Still, there are moments of sublimity amid the torment; there’s the descent into Donald along that sweeping S-bend by the Columbia River, and the break in the weather as we roll into Golden. We stop at the Fire Pit BBQ Smokehouse to warm up, and, realizing we’ve lost an hour passing back into Mountain Time, phone ahead to say we’ll be late.

“Bet you wish you had that windshield now,” Robert says as we prepare to leave. “No, it’s not so bad.” The Rockies don’t take kindly to hubris.

The ride from Golden to Lake Louise is by no means far (roughly 80 km), but today it’s some of the most miserable mileage I’ve endured. Icy rain now falls in earnest. The world becomes a slow-rolling blur and I hunker down, but it’s pointless. My hands are soaked and slowly turning to stone, my boots are leaking (lesson learned: don’t skimp on weatherproofing spray), and each battering of wind steals more precious body heat. The scenery stands in sharp contrast; the mountains impervious and permanent, as though a great flood could sweep through, wash everything away, and still they would stand.

The rain relents after Kicking Horse Pass and we arrive in a Lake Louise parking lot grim-faced and sodden. My companions make a call to find out where to go while I trudge off in search of warmth. Ten minutes later, having exhausted the patience of a souvenir store clerk with my squelching footsteps, I’m back at the bikes anticipating a brief ride to the hotel. “We’ve got farther to go,” says Robert. “What, like around the corner?” “No, we’ve got to go back on the highway, make a right, then go on down a ways.” Is this a joke? He assures me it’s not, and he won’t elaborate on how far “a ways” is.

They say everything’s bigger in Texas, but it turns out “a ways” isn’t far. After a foggy 15-minute ride in the gathering dusk we arrive at Baker Creek Mountain Resort and, judging by the pair of Harleys in the parking lot, Daniel and Martin (the Germans) are already here. We’re late, but after spending a half-day in a near-frozen state I will not skip a scalding shower. Afterwards, I walk into the restaurant pink-faced and glowing, spotting the Germans at a large table in the corner. “So, why are you late?” Daniel says, straight to the point. I briefly recap the day, the dam tour and our miserable ride. “Isn’t that interesting,” he says dryly. “Yesterday, a beautiful day, we Germans take our time and arrive late. You North Americans do the opposite.” I ask how long they’ve been here and he says a few hours. “We saw the weather would be bad, so we rode straight here.”