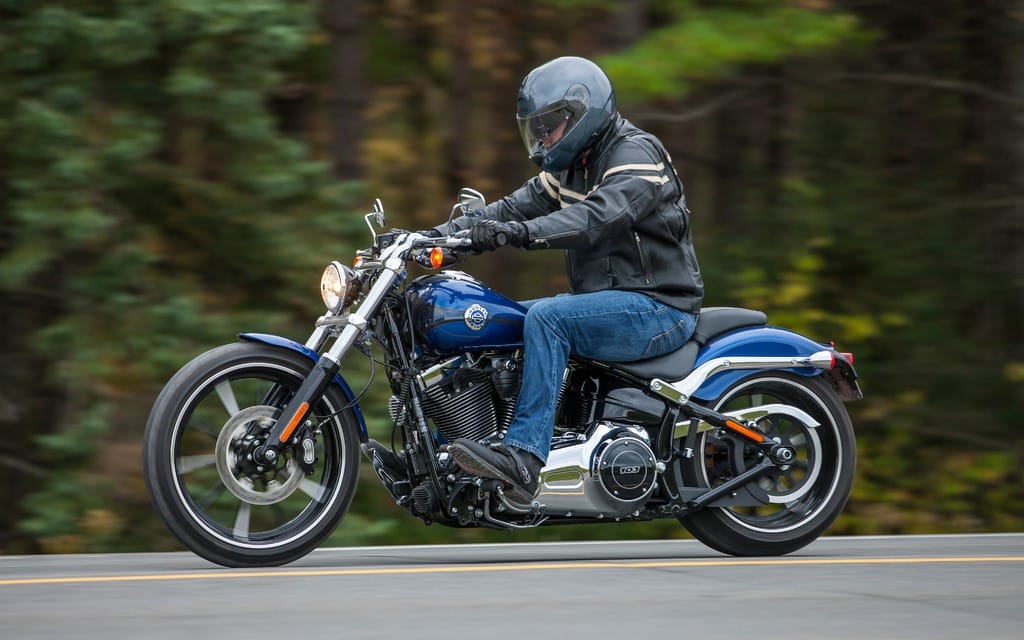 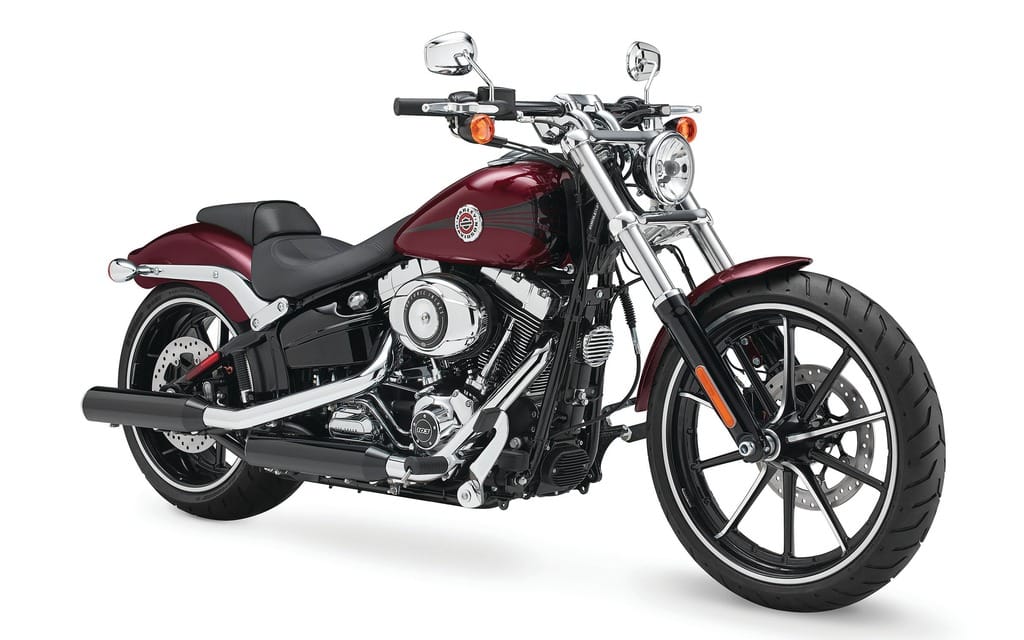 Not Breaking the Mould

Harley’s 2015 Breakout does exactly what it should

Affection is not blind, but it turns a blind eye on imperfections. After riding the 2015 Harley-Davidson Breakout ($22,779), I fill a page in a notebook with its shortcomings. Despite this, my opinion of the bike remains favourable. How is that possible? Let’s dispense with the negatives first.

Topping the list is the Breakout’s seating position. The arms-extended, feet-forward stance has become the norm in the cruiser category. While some consider it the epitome of cool, it does have drawbacks. Firstly, there’s the issue of reach. The Breakout’s wide handlebar is a healthy stretch from the saddle — the same goes for its footpegs. The seat is scooped low (627 mm laden) and narrows at the front, so those of smaller stature will almost certainly be able to flatfoot at a stop. But once underway the reach to the grips and pegs produces a pronounced hunch, like hugging a barrel while floating down a river. The seat’s shape allows little room for movement. Couple that with a posture that loads weight on the tailbone and numb-bum is inevitable.

Sensation is, however, periodically injected due to the limited travel (79 mm) of twin shocks hidden horizontally within the frame rails. A stout 49 mm fork provides a hint of what’s coming and a lengthy 1,710 mm wheelbase gives a moment to prepare, but because of the seating position there’s not much you can do (barring a lateral row-like heave on the handlebar to hoist yourself from the seat). Either grimace and bear it, or avoid potholes in the first place.

Perhaps easier said than done; the Breakout is not a nimble beast. There’s that long wheelbase, for one thing, plus a chopper-like rake and trail of 35 degrees/146 mm. Limited ground clearance (120 mm) and a lean angle of only 23.4 degrees will run you out of room in a hurry. Large rims (21-inch front, 18-inch rear) and? a massive 240-section rear tire make turn-in decidedly deliberate. Manoeuvring this bike around a bustling parking lot requires some forethought and should not be undertaken whimsically.

The Breakout weighs in at a burly 322 kg ready-to-ride. That’s a lot of bike to bring down from speed, so the fitting of a single front brake is surprising. However, it is a sizable 300 mm rotor with four-piston caliper, and is backed by a 292 mm, two-piston unit at the rear. The setup provides smooth, steady slowing power, though ample space is needed for hard stops. ABS is standard.

Other, more minor annoyances: small mirrors are all but useless and at times get in the way of my fingers as I reach for brake and clutch levers. Also, the miniscule front fender is great for showing off a 10-spoke cast aluminum rim, but it’s awful at containing water in wet conditions (the spray shoots up and back onto the rider).

What does the Breakout have going for it? Mostly it’s that 1,690 cc V-twin thumping proudly under the 18.9-litre fuel tank. The engine is rigid-mounted, but instead of shaking you to pieces it merely transmits a pleasing amount of vibration. It’s a powerful, brawny motor with tons of low-end torque (95.2 lb-ft @ 3,000 rpm) and a smooth-shifting six-speed transmission. It sounds great, too, with dual staggered mufflers emitting a low, hearty growl. Controls and instruments are appropriately simple, with a smart analogue speedometer that also houses a small LCD gauge. Paint is deep and lustrous — as you’d expect from Harley — and chrome is well balanced with blacked-out components to keep the overall look from becoming garish.

Harley says the Breakout “creates a solid connection between the rider and the power that moves the motorcycle, enhancing the emotional experience of riding.” It sounds clichéd, but it’s true; the Breakout personifies the muscular cruiser character that eludes many other manufacturers. Yes, it has shortcomings, but those same shortcomings have become the gold standard by which we define the cruiser — long, low, powerful and uncompromising.