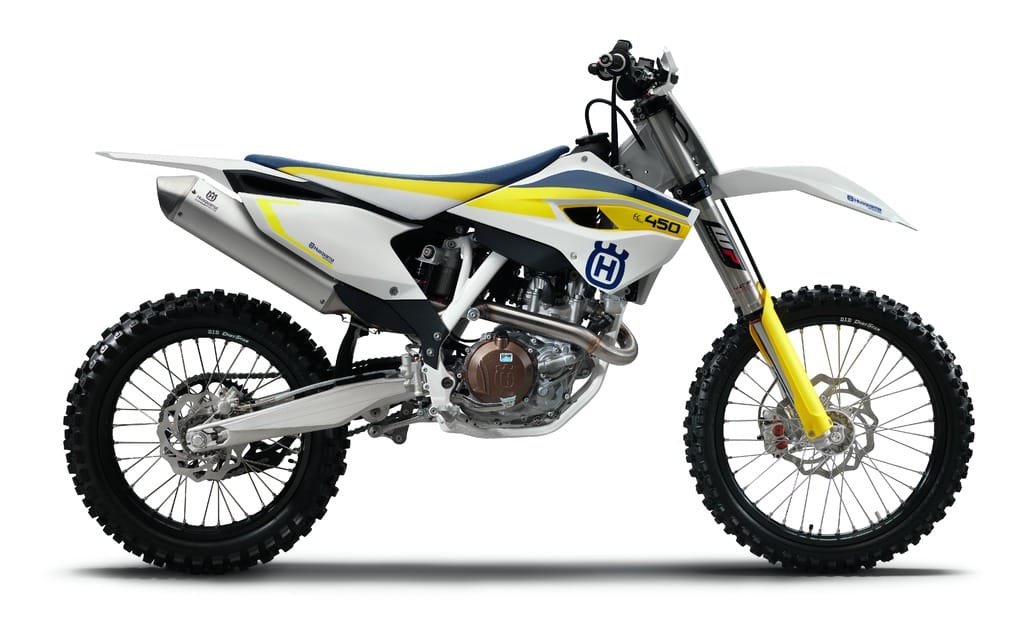 Laying the groundwork for an old brand to regain its glory

Once, over dinner with a girlfriend’s family, I received a lesson in tact. Her sister was describing a coworker speaking tactlessly. She provided a topical example, saying, “We all know James is chubby, but you don’t say that.” The only sounds breaking the ensuing silence were the creaks of my overburdened chair.

Imagine my horror, then, upon receiving an invitation to a “husky party.” Fear of being scouted by a plus-size modeling agency turned to relief when I realized the invitation was for a press event of Husqvarna, now co-owned by Cross Industries and Bajaj Auto (an Indian manufacturer of two- and three-wheelers). Even if those corporate monikers aren’t familiar, the brands falling under their umbrella will be: Wethje Carbon Composites, Pankl Racing Systems, WP Performance Systems, and, most notably, KTM.

KTM is a dominant force in today’s off-road motorcycle segments. When its parent company purchased Husqvarna from BMW in early 2013, hacks were left scratching their heads. When you have one off-road brand, why buy another? Was the move made simply to absorb a competitor? “At the group level, the company was looking for diversification opportunities,” says Florian Burguet, managing director of Husqvarna Canada (he holds the same title with KTM Canada). KTM engineers were brought in after Husqvarna’s acquisition and challenged to produce quintessential off-road motorcycles. They pointed at their KTMs and said, “We already did.”

As such, it’s no surprise that current KTM and Husky models are very similar (though Husqvarna now has its own designer and engineering group). How do you achieve diversification when the products are almost the same? What does Husky have that KTM does not? “One day it’s going to be the product — this model is only available from Husky, this model only from KTM,” says Burguet. “What currently differentiates the brands are core values. KTM is all about performance — if you’re not on top of the podium then you missed the point. Husky is more about the journey. For sure we want to win, but if we got third, had a good race and played fair with the competitors, then we’re happy. The Husky brand will be more lifestyle oriented, more about freedom, about grassroots, more about the journey and less about the result.”

In the past, the results were good. Husqvarna has a storied history of off-road racing success, having accrued regional, national and world titles — especially in the glory days of the 1970s. Young lads swooned over Steve McQueen’s red-and-chrome Husky in On Any Sunday. Its history will surely attract some buyers, but is history alone enough to sell motorcycles? “The people who know and have experienced the brand are getting older,” says Burguet. “If we’re talking about these people, I would say yes; the equity and power of the brand are that strong.” But how do you attract newer, younger buyers? “You do that with the product. For most people history is not enough, but the product will make the difference. That’s going to be the point of entry, a mix of extremely strong product and strong brand. Husky has some of the biggest equity in the [off-road] market right now. There’s opportunity not just for today, but for tomorrow.”

If Husqvarna has so much potential, why did BMW let it go? According to Heiner Faust, head of sales and marketing for BMW Motorrad, it was all about timing. “This was not a decision made overnight,” he says. “When we bought Husqvarna in 2008 the idea was right because in the motocross and sport-enduro segment there were many young customers. The moment we signed the contract the crisis came — the ink was not even dry. The segment went down by 50, 60, 70 percent, and did not recover for years. There was no light at the end of the tunnel. At some point you need to decide how long can you afford to lose money. For us, that point was the end of 2012.” In Germany they say Heiner-sight is zwanzig/zwanzig; considering the continued recovery of the segment, was selling the right decision? “Yes, because we decided to go with a different strategy. We concentrated more on-road.”

Husqvarna’s focus has always been off-road, a fact evidenced by its current offerings. Its motocross models come in both two- and four-stroke variations (differentiated by the T or F in their designations): the TC 85, 125 and 250; and the FC 250, 350 and 450. The same holds true with its enduros: the TE 125, 250 and 300; and the FE 250, 350 and 501. For 2015 two four-stroke dual-sport models have been added to the lineup, the FE 350 S and FE 501 S. Is expansion in the street-legal segment likely to continue? “In the short term, off-road competition will be the main focus area,” says Burguet. “However, we’re confident that our dual-sport models are going to sell well in Canada. I wouldn’t be surprised to see more models in the future.”

Despite the encouraging signs, obstacles remain. The main problem for Husqvarna Canada is its unevenly spread dealer network. British Columbia and Alberta are well served with 16 dealers between them, but the rest of the country is woefully underserved: Quebec has three dealers and the Maritimes and Ontario only two each. Clearly, expansion is necessary for Husqvarna’s continued growth and success. We’re told it’s in the works, and for the Husky-hungry public, it can’t come soon enough.