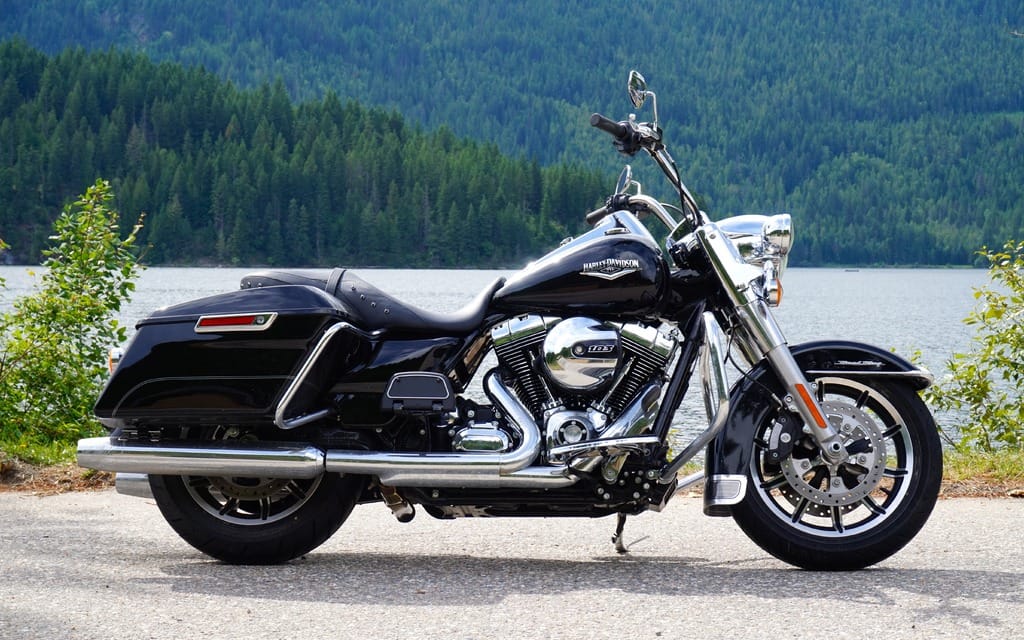 Front of the Line

It may not be Harley-Davidson’s top-of-the-line tourer, but there’s a reason it’s called the Road King. Harley claims timeless cruiser style with long-touring capability. After six days and over 2,000 km in B.C and Alberta, I say they’re not far off the mark.

The 2014 Road King (from $22,349) has a host of new features — most notably its “high output” (their words) twin-cam 103 engine. The fuel-injected V-twin displaces 1,690 cc and has an integrated oil cooler (which is incorporated with enough subtlety that casual observers may not notice it). Harley says the engine delivers more low-end torque (of the “stump pulling” variety according to Milwaukee, with a claimed peak of 104.7 lb-ft at 3,250 rpm) for improved passing power, while at the same time being smoother and emitting a more refined exhaust note.

When I press the starter button, the Road King rumbles to life in characteristic Harley fashion (it’s like receiving a shake at the shoulders) and ticks over in a way that attracts notice without arousing ire. Clutch pull is moderate, and pressing the heel-and-toe shifter (which gets in the way of my size-12 boot) into first results in a solid clunk. Fueling is good, even while trolling through town in third or fourth gear. At low speeds and revs the Road King has a sensation of reserved but substantial power, while on the open road a generous twist of the wrist delivers smooth acceleration. Sixth gear is very tall, and urgent passing requires that the transmission be dropped to fifth. Cruise control, easily operated using a toggle on the left switchblock, is standard.

The engine is housed in a stout twin-downtube steel frame. Handling is secure, with massive 49 mm fork tubes, stiffer-than-before triple clamps and larger steering head bearings for improved front-end feel. Dual shocks are air-adjustable (and standard). The fork has 117 mm of wheel travel and is effective, but out back there is only 76 mm of travel, which, coupled with a seating position that loads weight on the tailbone, transmits road imperfections directly to the rider’s spine.

With a wet weight of 371 kg, there’s no denying the Road King is a big motorcycle. This can make it a bit ponderous, and in certain situations it’s necessary to plan ahead (downhill parking spots are best avoided). Corner turn in, too, requires deliberate action, though wide bars provide ample leverage. But once a turn is initiated the bike displays surprising poise — especially in long sweepers — and holds its line well. But in tighter corners the Road King’s shortcomings come forth, namely its lack of ground clearance (135 mm) and limited lean angle capability (32 degrees). Dunlop Multi-Tread tires (130/80-17 front, 180/65-16 rear) combine harder centre compounds with softer edges — providing a good compromise between wear and grip — though you’ll be scraping floorboards long before you’re close to rolling off the edge of the tire.

To bring such a beefy bike to a stop requires solid braking power. For the Road King a single rotor at the rear supplements dual 300 mm rotors with Brembo four-piston calipers up front. Linked ABS is a $960 option. It can’t stop on a dime, but the Road King brakes smoothly and predictably.

With plenty of chrome, deep, lustrous paint and lack of fairing, the Road King nails the traditional cruiser look. The windshield, too, can be quickly detached for an even simpler stripped-down style. This gives the bike some versatility, as do hard saddlebags that can hold a surprising amount. The bags are lockable, and have a newly designed “One Touch” latching mechanism that’s more convenient than the old two-handed system. The low seat (715 mm) is deeply dished (though this may be a hindrance for the short of inseam) and well padded, and is comfortable for longer tours. And, since it’s a Harley, accessorization is a given.

Me? I’d leave it stock, as its simplicity is its greatest asset. The view from the saddle is clean and uncluttered, especially with the windshield removed. The tank-mounted gauge is as basic as it comes, a large analogue speedometer (with “three percent wider” numbers!) and small LCD that displays the odometer, trip meters, clock, range-to-empty, tachometer, or gear indicator (toggled through a trigger button on the left switchblock). There’s no “infotainment” system, no Bluetooth connectivity, no computer-generated voice telling you where to turn. In short, there are no distractions.?

Riding a Road King distills motorcycling to a rider, the bike, and the road, and, despite its shortcomings in the twisties, it’s the best-handling Harley I’ve ridden.