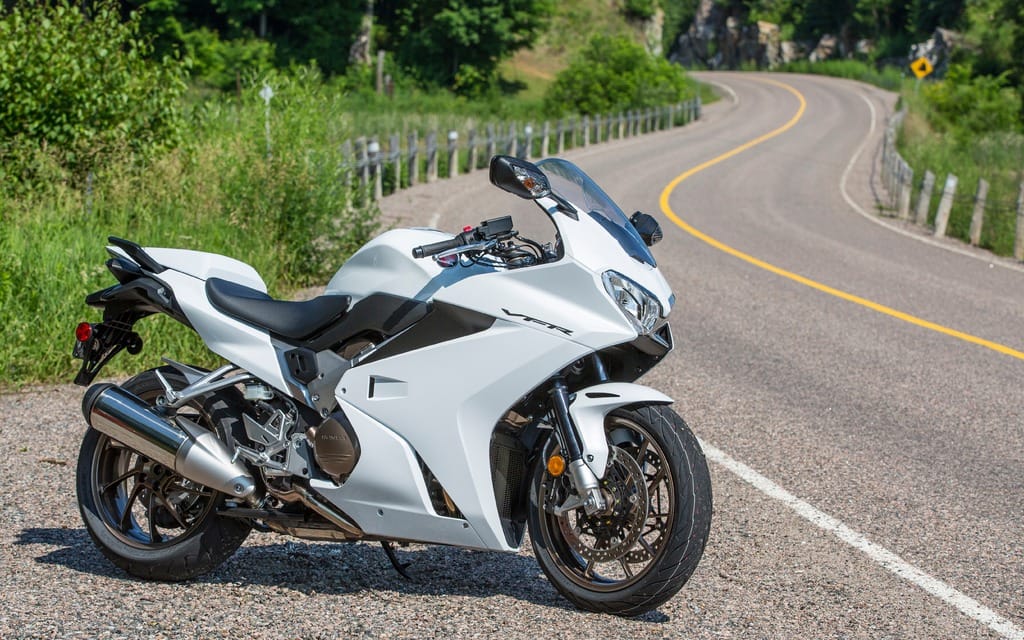 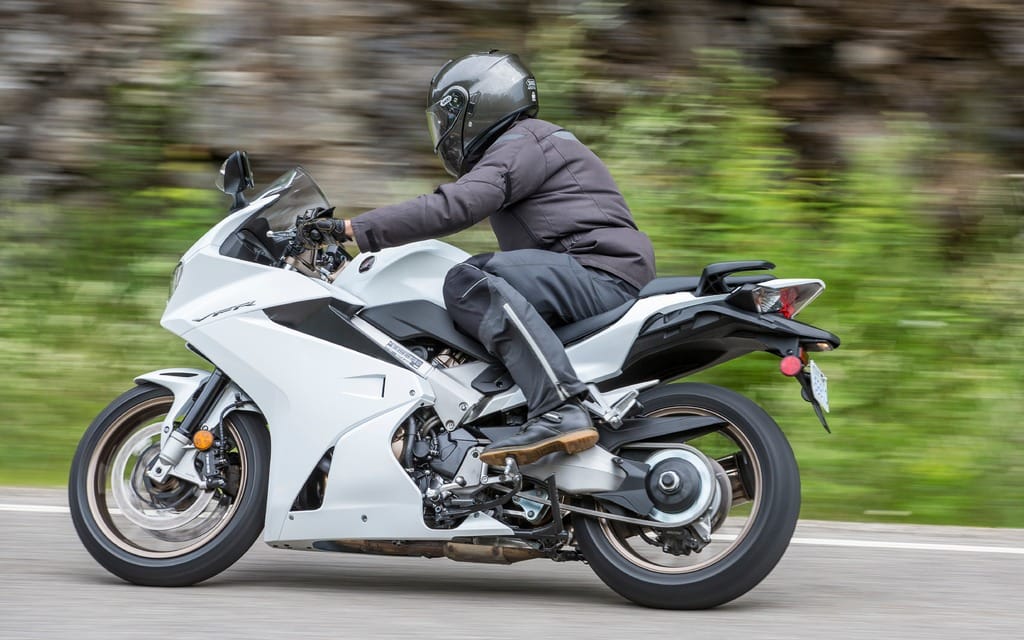 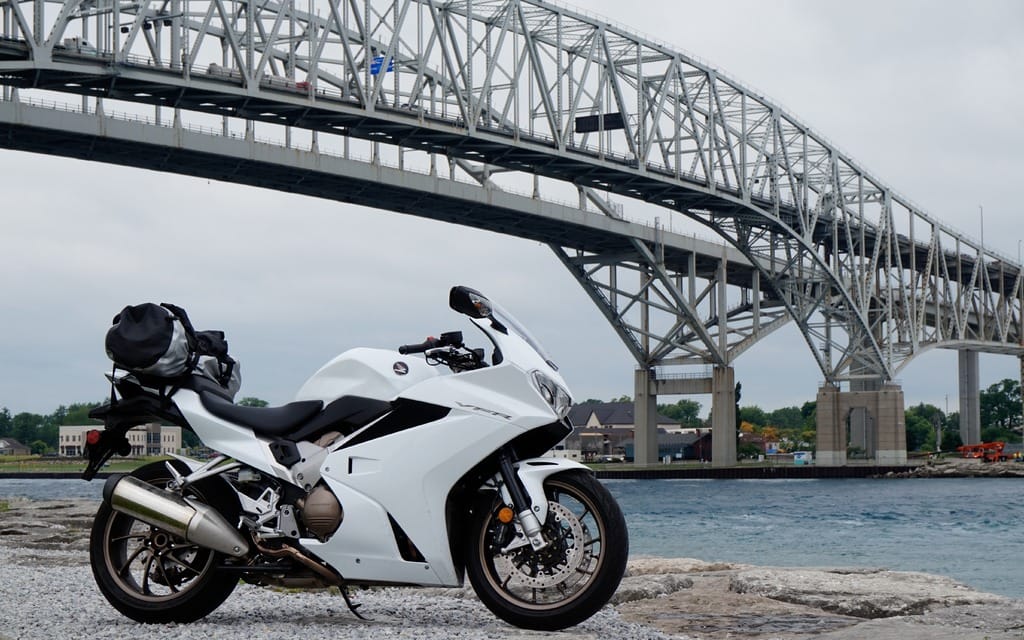 Realizing a dream can turn into a nightmare

As a boy growing up in Kincardine, Ontario, on the shore of Lake Huron, I’d gaze at the horizon and wonder what was across the water. I imagined what the people were like, what they did and where they lived. Maybe, I thought, there’s someone sitting on that far shore wondering the same thing. I looked at a map and dreamed of rounding Saginaw Bay on my way to East Tawas, which, by my reckoning, lay due west of my hometown. When you’re 10 everywhere is exotic — even Michigan.

Honda’s new VFR800 ($14,499) seems like the perfect mount for finding out what’s across the lake. With 1,000 km of pavement to cover in two days, a sport-touring motorcycle is ideal. The VFR800 is the quintessential sport-tourer — at least it will be, once touring accessories become available. When I pick up the bike the first thing I notice is its stunning pearl white finish (it’s also available in red). Then I notice its complete lack of luggage. Luckily the tail section has four sturdy tie-down points, so my duffle bag straps securely to the pillion seat.

Riding south from Kincardine on Highway 21 is like moving through memories, the road’s long, straight sections making it easy to become lost in thought. The smooth, subdued qualities of a VFR800 ridden with restraint also help, its 782 cc liquid-cooled V-four humming along quietly beneath me. Seating position is quite comfortable and typical of a more aggressive sport-tourer: slightly more upright than a sportbike, though not as up-and-down as a standard. I find the clip-ons fall naturally within my reach, and the pegs fold my legs into an acceptably sporty position. The VFR800 has a racy feel, though for now I’m content to cruise under overcast skies.

The route is familiar — I used to date a girl from Sarnia and would make the trip on weekends — but I haven’t been this way in a long time. The VFR800’s 17-inch rims roll on Dunlop Sportmax rubber (120/70 front, 180/55 rear) through Goderich, Bayfield and Grand Bend (really more gradual than grand). After Ravenswood I make a right onto County Road 7 without even thinking (it being the shortcut she told me about years ago) and bittersweet memories begin surfacing. We were young and naïve, used to take turns describing how our lives would play out together. Those fairy tales invariably ended with marriage, children, a house with a picket fence. On a sullen day I ride past the ice cream stand where we shared a cone, the park where we walked, and the parking lot by the St. Clair River where we came late at night to … talk. I imagine what her life is like now; wonder if, with another man, she’s found all the things we once dreamed of. It’s making me morose — a mood that doesn’t bode well for a border crossing.

My mood lightens as I work through the VFR800’s slick-shifting six-speed transmission on my way over the Blue Water Bridge. Clutch pull is moderate, and each elevation of my left boot results in a satisfying snick. The sky, too, is lightening, a few rays of sun struggling through clouds that are starting to shred. The VFR’s white-on-black digital dash, which is split in the middle by a large analogue tach, shows the ambient temperature has risen to 27°C (the dash also displays speed, fuel level, current gear, time, and choice of odometer, trip meters, fuel consumption figures or engine temperature). I breeze over the bridge and find there aren’t many vehicles ahead of me. So far, so good.

Then, as I reach the front of the queue, things stall. Border agents emerge from booths and mill around with radios at the ready, repeatedly casting nervous glances back at the main building. We’re held for a half-hour. The sky clears. In full rain gear I’m being baked by the sun, can feel sweat trickling down my back. Finally there’s movement and I’m waved forward. “How are you today?” the guard barks. “I’m well, and yourself?” He rolls his eyes, frowns, and shakes his head. “I’ve been better.” A surly border guard having a bad day, I think — better tread lightly. He stares at his computer while asking his questions. “Is the trip for business or pleasure?” Business. “Where are you headed?” East Tawas. “When are you returning?” Tomorrow. “Where do you live?” Toronto. His head snaps around. “You’re going to Tawas today, then back to Toronto tomorrow?” Yes. He takes half a step out of the booth, eyes narrowing. “That seems like an awfully long way to go in a short time, especially for business. What do you do?” I explain what I do and why I’m going to East Tawas. His expression grows increasingly incredulous, causing my mouth to become more and more cottony. Then the question I’ve been dreading: “Do you own this motorcycle?” “Well, no, it belongs to Honda, it’s the new VFR800, part of the press fleet, gets loaned to journalists …” — the words keep tumbling out. He raises his hand and I shut my mouth. I’m not sure whether he believes me or has just had enough aggravation for one day, but he hands back my passport and points down the road. “Go.” He doesn’t have to say it twice.

If the VFR800 is smooth and subdued when ridden with restraint, it’s entirely different — and undeniably appealing — when ridden with enthusiasm. Its fueling is flawless and I head north on State Route 25, and once out of Port Huron I unleash a fistful of throttle. The bike surges forward through its meaty midrange, really coming alive from 7,000 rpm — which is where the VTEC system kicks in (VTEC operates only half of the engine’s 16 valves below that mark, all of them above). Honda says the transition is seamless, though if that were the case you would only hear the difference — a resonant purr becoming an angry, open- mouthed snarl — and not feel it. You can feel it. But the transition is a smooth step, and power delivery on either side is linear. If anything, the injection of character provided by the VTEC system makes riding the VFR800 all the more enjoyable.

The condition of Michigan’s roads soon makes me regret every evil word I’ve ever uttered about Ontario’s poor pavement. (Instead of “Pure Michigan,” as the marketers have branded the state, the welcome sign should read, “Michigan: a state of disrepair.”) A 43 mm fork (preload adjustable) does its best to smooth the bumps, as does a single Pro-link shock (adjustable for preload and rebound damping), and a solid-yet-light diamond triple-box-section aluminum frame helps to keep the bike firmly planted. Considering the roads, the VFR800’s suspension does a good job, though it is on the stiffer side — a desirable trait in a true sport-tourer.

I stop at Harbor Beach to top up the VFR’s 21.5-litre fuel tank, and to see “the world’s greatest man-made harbor.” (It’s big, but I’ve seen bigger.) State Route 25 doesn’t stray far from Lake Huron’s shore, and hardly any of that shore is undeveloped. I have lunch in Caseville on the patio of the Riverside Roadhouse where I’m surrounded by cottagers discussing how many birdies they got yesterday, or what cocktail they’ll have today. I’ve heard the same conversations in Sauble Beach, Ontario, and Collingwood — the only differences are the accents. The sky is now clear and the temperature keeps rising (the dash reads 30°C). By Bay City the day starts to drag, but I perk up when State Road 13 turns into 23. This is it, I say to myself, I’m rounding Saginaw Bay.

Then I’m there, exotic East Tawas. It looks like … everywhere else I’ve passed through, on both the American and Canadian shores, and somehow I find that both disappointing and comforting. After checking in at the Bambi Motel, and feeling surprisingly good after a full day on a slim sport tourer (the VFR800’s seat is firm, but not unkind, and is adjustable to either 789 mm or 809 mm using a tool provided), I walk down to the shore. Sitting in the sand with the sun setting prematurely at my back behind thick, dark clouds, I wonder if there’s a curious 10-year-old boy on the beach in Kincardine dreaming of what’s beyond the horizon. It’s pretty similar, I’d tell him, but you should still go see it for yourself.

The next morning I awake to the sound of rain tapping pavement outside my window. The cashier at the gas station says, “It’s gonna be a wet one.” Never in my life have I heard such an understatement. The forecast calls for heavy, incessant rain from East Tawas all the way to Toronto. I select the most direct route — south on I-75, east on I-69, then continuing east on the 402 and 401 back in Canada — and steel myself for a day to be endured rather than enjoyed. By Saginaw the rain is steady; by Flint, it’s unforgiving. My hands are wet, but with the VFR800’s standard heated grips set to level five (the highest), they’re at least warm. Traction control also comes standard (and can be disabled), as does ABS; welcome assurances in these tricky conditions.

Thick spray kicked up by 18-wheelers makes it difficult for me to see, and, I imagine, for truck drivers to see me (although bright LED headlights shine out like beacons). One trucker, I’m sure, does not, and cuts abruptly into my path. Honda says the VFR800’s two-channel ABS “provides consistent and safe all- weather stopping control.” Judging by the bike’s response to my steadily increasing brake pressure, I’d say Big Red is right. Dual front 310 mm discs with four-piston calipers and a 265 mm disc with two- piston caliper haul the VFR’s 239 kg down from speed solidly, and when ABS activates it’s powerful and pliable. Even in such hellish conditions, the VFR800 displays remarkable poise.

I, on the other hand, do not — especially as I fumble to remove sopping gloves and unzip rain gear to fish out my passport for the Canadian border guard. She smiles at my struggles, delicately plucking the document from my dripping fingers. She looks at me with pity, and after a few quick questions I’m cleared to leave. It’s almost disappointing; at least at the booth I’m out of the rain. Honda has slimmed down the new VFR800 to make the bike feel more compact, but the narrow fairing now provides less protection from the elements. Of course, if you ride anything for eight hours in relentless rain you will get wet — no matter how good your rain gear is. My only gripe with the VFR is its windshield. It directs turbulent air into an awkward area right around my chin, which becomes an annoyance at higher speeds and causes me to either crouch lower than I would naturally, or sit bolt upright like a meerkat scanning the savannah. But windshields are highly subjective, and shorter or taller riders may have no such issues.

After a blurry ride on the 401, I’m back in my mudroom peeling off soaked clothing and tossing it into a corner, each item landing with a smack. Every step I take deposits a boot-shaped puddle on the floor (I would’ve been less wet had I swum across Lake Huron). I’m miserable, but I made it, and the VFR800 impressed in the process. And it is, after all, a process, the good balancing the bad along the way. Sometimes a nightmare is necessary to make subsequent dreams even sweeter.