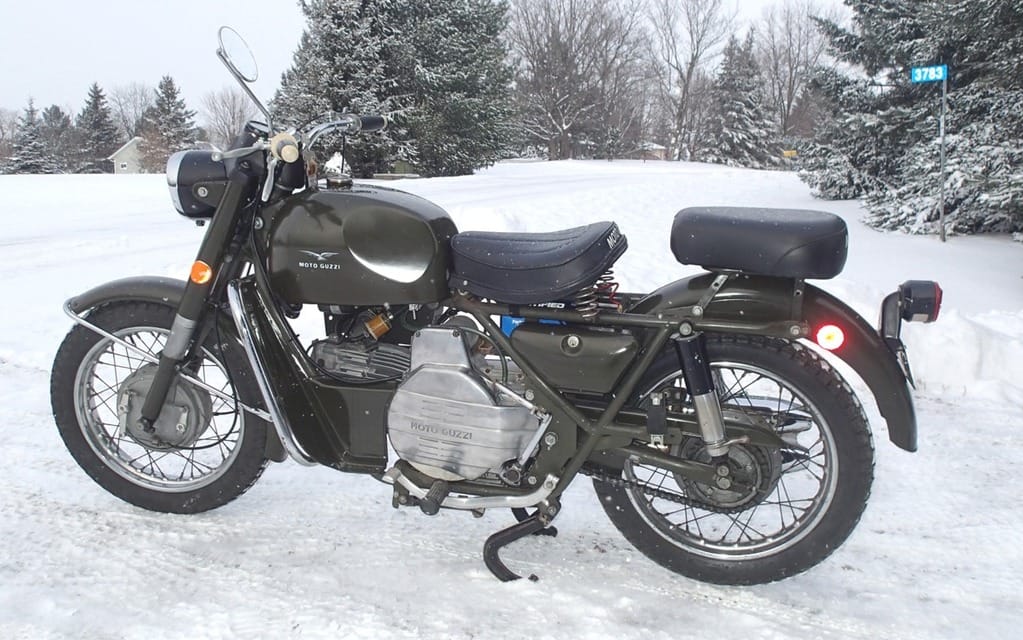 There’s no accounting for the single-mindedness that seizes me once I get an idea. I wanted a Moto Guzzi Nuovo Falcone — a 500 cc single that was never imported to North America. I saw one advertised on Kijiji in Montreal and decided I had to have it.

It was mid-December, but the roads were clear and dry. I set out for Montreal in my van, stopping only for coffee and to pick up a friend along the way. For some time I’d been aware of a slight chirping from the front driver’s side wheel, but in my excitement I ignored it.

We both rode the Guzzi long enough to see that it was in reasonably good repair, and to make sure my desire for it was undiminished. Papers were signed, money changed hands, and we secured the bike in the back of the van.

As we left Montreal, the chirping from the van’s wheel grew more insistent. By the time we approached Cornwall I was starting to feel disturbing changes in the steering. We pulled over just in time. The wheel was almost off; the bearing had completely failed. We completed the journey home on the back of a flatbed truck.

Fast-forward three weeks. Christmas was over, winter was in full swing, and I was suffering from full-blown motorcycle withdrawal. The Nuovo Falcone sat safely in the garage, taunting and tempting me. The roads in my subdivision were an icy mess, but the main roads were ice free, bare and dry. I loaded the bike into my recently repaired van and drove to a nearby parking area with access to dry roads.

Even in cold weather, that Guzzi is a one-kick bike — get its hefty flywheel moving and it doesn’t really have much choice. It was chuffing away through its monstrous stacked silencer while I donned my riding gear. When it replaced the old Falcone in 1969, the Nuovo Falcone was just about the slowest, most old-fashioned machine available. It was a slug, but an immensely charismatic one.

With a characteristic clunk, I found first gear and headed north towards Westport. The Nuovo Falcone’s acceleration is leisurely, accumulating speed in an unhurried manner; unintended wheelies are unlikely. Nevertheless, I was pleasantly surprised to see the speedometer nudging 80 km/h (although, in truth, it may have been a touch higher — fast enough to reassure that riding with normal traffic was in the cards). I wouldn’t be getting speeding tickets, but I wouldn’t be holding up traffic either.

Unfortunately my reverie was short-lived. The bike began to stutter and lose power, and before long I was at the side of the road berating myself for not bringing any tools. I kicked it over a few times, but with no luck. (Later, I found the problem was a fuel blockage — an easy fix, but just then I was stuck.)

I had hardly worked up a sweat before a car stopped and the fellow inside asked if I needed help. Instead of fussing with the bike I threw my keys in my helmet, jumped in the car and we headed back to where my van was parked. My saviour was also a motorcyclist, so on the brief trip we exchanged stories about rides we had in common. Back at the van I gathered my gear, found my van keys and we said our goodbyes. That was when I noticed I didn’t have the bike keys.

I searched my pockets. I searched the van and the ground all around. I must have looked inside my helmet a dozen times. I didn’t have them. Had I dropped them by the bike? The Guzzi was where I’d left it, but no keys were in the ignition and there was nothing on the ground. The only other place I might have dropped them was in the car. But I had no way to contact him, and he had no way to contact me. The loss of the keys was more of an irritation than a real problem. While it would be nice to use the original ignition, I have already replaced it with another, so the bike is fully functional again.

Perhaps this litany of annoyances will convince me that it’s necessary to be patient, to keep vehicles in good repair, to wait until the roads are really ready to be ridden, and to take that extra moment to check that I have everything. Perhaps, but I doubt it. The Nuovo Falcone is back in the garage, taunting and tempting, while I watch the weather, waiting for a window to take my first real ride.