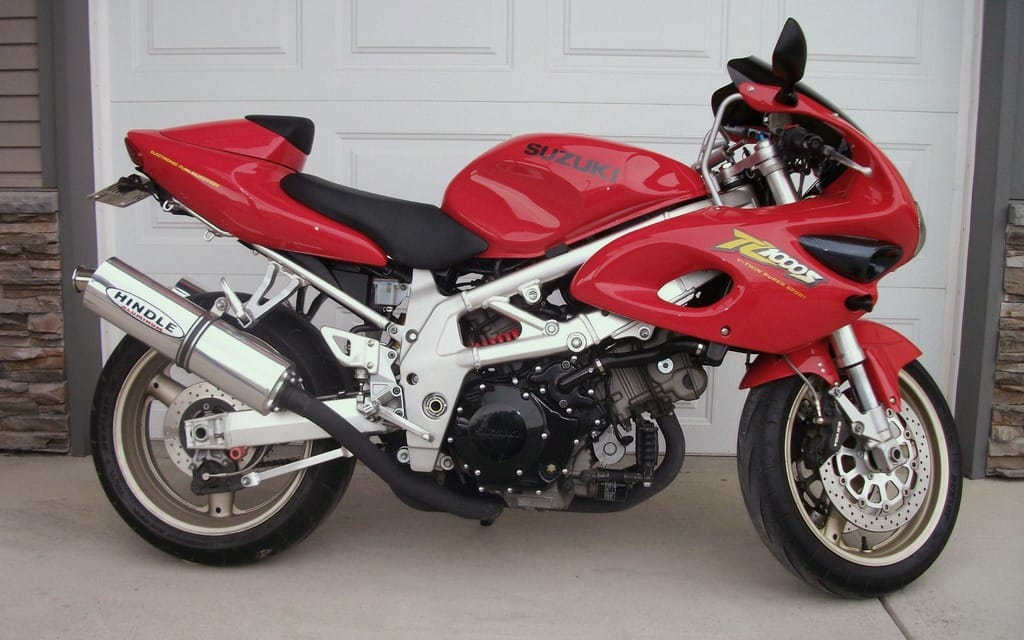 Suzuki’s TL1000S was both a welcome surprise and a letdown back in the late ’90s, when V-twin-powered sportbikes were anomalies. Most sportbikes were powered by inline fours, and Ducati’s brilliant 916, a rare exception, set a high standard for sporting twins. Enter the 1997 TL, flexing a 1,000 cc, 123-claimed-hp V-twin housed in an aluminum frame and accessorized with a rotary rear damper, a slipper clutch, and fuel injection. Take that, Ducati.

And it worked almost as advertised — but there were problems. It was fast and good-looking, but a shaky front end and crude fuel injection spoiled what could have been a rocket. A year later, the TL was revised and some problems were fixed, but fuelling was still a bit sticky, and Suzuki confounded buyers with a higher spec R version. And then, just as the market for the TL was feeling queasy, along came Yamaha with a little something called the YZF-R1. Today, you can find R1s everywhere; if you want to find a TL, you might need to be lucky, like Dave Downs, who stepped in behind a motorcycle thief.

How did you get this bike?

I saw it at New Life Cycle in Williams Lake, B.C., and coveted it. Dave Graf owned the shop, and I told him I wanted to steal it from him. He said, “You mean you want me to go downstairs and when I come back the bike is gone, or do you want it for a good price?” So I got it for a good price, about $4,500. That was in August 2010.

But the bike had a rebuild status on it. It had one owner before me, but it was stolen, ICBC wrote it off, and then it was recovered. By then it had already been written off, so New Life Cycle ended up with it, and it sat there for years. I guess nobody around there knew or appreciated what it was. Dave said it had rebuild status. He said, “This bike’s never been dropped,” so whoever stole it must not have ridden it like they stole it.

I’ve got it all set up for back-road bombing. I’ve geared it down so it accelerates hard out of corners and I redid the suspension. I had a suspension shop here in Kamloops go through it. We put Race Tech springs and cartridges in the fork, and I changed out the rotary damper for an Öhlins damper. So it’s a whole different bike; however, that rear spring is weak, so I’ve got one coming from Japan right now. I also put a ride-height adjuster on it, because the bike tended to be a little bit squat, and it affected handling. I think they were notorious for headshake, because there was a recall on them after the ’97 model and they put steering dampers on them. So I jacked up the rear a little bit so there’s a little bit more weight on the front end and it turns into corners that much better.

What else did you do?

Because I swapped the sprockets to a 16-tooth front and a 39-tooth rear, I put a Speedohealer on it to correct the speedometer error. I put Ferodo brake rotors on with Dunlop DP Sport HH pads and Galfer steel-braided brake lines. And Hindle stainless steel slip-on mufflers. I think that’s about it.

Have you toured on it?

I think the farthest I’ve gone is to Victoria and back to Kamloops. Some days I’ll ride to Whistler, have lunch and ride home. Most of that road has a posted limit of 60, so that tells you something about it, and part of it’s been repaved. I think from Duffy Lake down to Mt. Currie has been repaved. The Lillooet side’s still rough, but it’s a blast.

For me it is, and I’ve owned full-on sportbikes like ZX-10s and such, and it’s way more comfortable than a current sportbike. The seat is stock, but it’s very comfortable.

How fast have you gone on it?

How does it sound?

I love it. The Hindle slip-ons gave it an awesome sound.

The looks. It’s a butch-looking bike. And then there were things that were ahead of its time, like the slipper clutch, and the early fuel injection that works fairly well for a 1999 motorcycle. It doesn’t always carburet perfectly, but when you’re on the throttle it works very well. It’s only at slight throttle openings that it wants to hunt a little bit.

Was it everything you hoped it would be?

It needed a lot of work when I got it, but once I got it squared away, it was good. Lots of torque, and just enough horsepower. It’s been a daily rider for me. I’ve also got a Busa, but I like riding the TL.

I read an article on it by some expert and they said the damper was probably a good idea, but it would need to be twice as big to work properly. I’ve got it hanging on my shop wall.