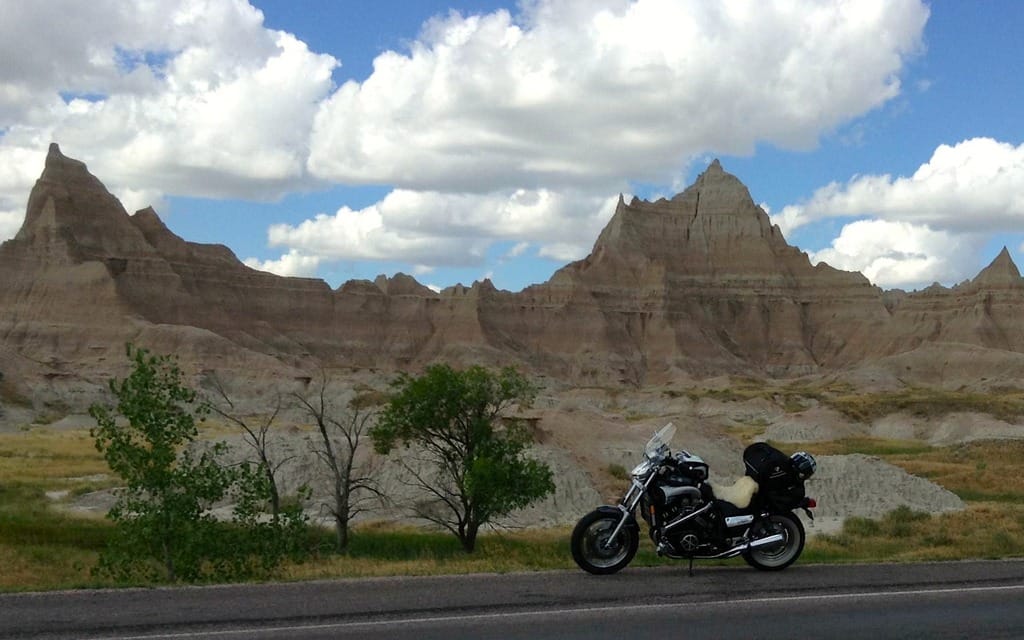 Eight days wasn’t a lot of time, but it was all I had. My goal was the Black Hills of South Dakota. From my home in Elliot Lake, Ontario, it was almost 2,000 km one-way, and it was just me and my 2002 Yamaha VMax. I packed light and left on a bright, sunny morning, cruising the two hours to the Sault Ste Marie border crossing in a state of excitement.

It was there that my trip almost ended. The American border agent informed me that my passport had expired. After a thorough round of questioning, and some pleading, she kindly let me through. Once on the Interstate (man those highways are smooth and fast) I quickly made my way to Wautoma, Wisconsin, and ended the day 780 km from home. The next day was a blur of gas and food stops, and driving across an increasingly flat prairie landscape, until I arrived at Mitchell, South Dakota, almost 800 km closer to my destination. I had a few hours to kill before dark, so I cruised around helmetless (something I don’t think I could ever get used to) and saw the sites. I checked into a nondescript motel, but sleep was slow in coming due to the loud, siren-like hum of cicadas.

On the third day I broke up the monotony of the flat, straight highway with a stop at “1880 Town,” a roadside attraction of buildings and artifacts from a bygone era. Another stop was made at Wall Drug, touted as the largest drug store in the world, where they sold everything from saddles and whips to souvenirs — though I don’t think there was a pharmacy in the whole place. Later in the day I detoured through the eerie peaks and valleys of Badlands National Park. I took over a hundred photos of the ancient, weather-carved formations, as well as prairie dogs and pronghorn sheep. The air was hot, and it was dry and quiet. Every curve in the road exposed breathtaking new vistas — this alone was worth the trip. That evening in Rapid City I found a reasonably cheap motel to use as a base for my exploration of the Black Hills. It was only a few days before the Sturgis Motorcycle Rally, and loud-piped Harleys were already rolling in by the hundreds.

The next few days were nonstop activity. There is so much to see in the area that two weeks isn’t enough time, let alone just three days. Still, I made the most of my time by cruising beautiful roads — like the Spearfish Canyon Byway, with its towering cliffs and clear mountain springs and waterfalls. I toured the Iron Mountain Road, with its lookouts, pigtail bridges, and tunnels through the mountainside, riding right past majestic Mount Rushmore. I drove through Custer State Park, weaving around bison standing in the road, passing deep blue Sylvan Lake and the spire rock formations of the Needles Highway. I drove past the unfinished Crazy Horse Memorial, which will dwarf Mount Rushmore if it’s ever completed. I strolled through the city of Deadwood with its casinos, and went to the Boot Hill cemetery to pay my respects to Wild Bill Hickok and Calamity Jane. In Sturgis, I shopped at the local Harley-Davidson dealership and wet my lips in the Knuckle Saloon. I toured reptile houses, car museums, and gold mines in towns called Lead, Silver City and Keystone. I even rode to Wyoming to see the Devil’s Tower rising 850 feet out of the prairies like an alien artifact.

Although I travelled alone, I was never lonely. I met many good people, fellow enthusiasts who were generous and kind, each with tales to tell at the end of the day. I shared cherry moonshine with an old timer who’d been going to the Sturgis rally since the 1950s. His bike was armed with a nine-foot-long whip, coiled up on the handlebar in case of “trouble.” Everyone carried a knife, or gun, and wasn’t afraid to show it off either — a little unsettling for this northern boy.

I had to leave before I’d seen many of the sights in that region, and the ride home was fast and uneventful. In those eight days of travelling I did a total of 5,300 km. I was tired and beat when I got home, but I’d loved every minute of it. If someone called me up and wanted to go there tomorrow, I’d pack my bags today.