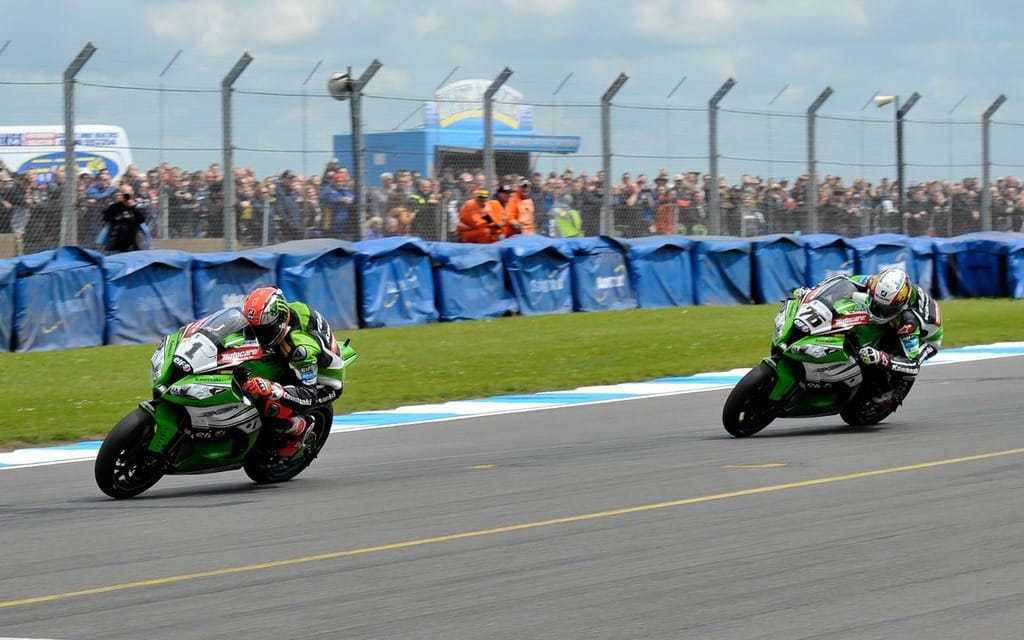 Sykes doubles down at Donington

Defending World Superbike champ Tom Sykes (Kawasaki Racing) had a stellar Sunday at Britain’s Donington Park Circuit, taking both victories in the fifth round of this year’s championship. He had his work cut out for him, however, with a subpar qualifying session only good enough to start from seventh on the grid.

Aprilia Racing teammates Marco Melandri and Sylvain Guintoli led the way early on in Race One, with Alex Lowes (Voltcom Crescent Suzuki) and Loris Baz (Kawasaki Racing) also in the mix. Sykes dropped as low as 11th on the opening lap but steadily reeled in the leaders, passing Baz for the lead with three laps remaining. A fantastic scrap between the Kawasaki teammates followed, with Baz and Sykes exchanging the lead several times. Sykes got the win, Baz finished second 1.538 seconds behind, and Alex Lowes rounded out the podium 6.394 seconds adrift.

In Race Two the Aprilias of Sylvain Guintoli and Marco Melandri again got out front early. Tom Sykes had a far better start than in Race One, sitting fifth after two laps. A collision between Melandri and Alex Lowes took both riders out of contention, and by lap six Guintoli, Loris Baz and Sykes were leading the way. Midway through the race Sykes made a daring double pass to move from third to first. Sykes was simply too strong on the day, again pulling out the victory. Great riding from Baz gave him another second-place finish, 3.678 seconds back, while Guintoli crossed the line a forlorn third, 7.376 seconds behind. For full race results from Donington Park, click here.

The pair of victories has given Tom Sykes the lead in the overall championship with 185 points. Jonathan Rea (Pata Honda) and Loris Baz are tied for second with 159 points.

The next round of WSBK is June 8 at the Sepang International Circuit in Malaysia.