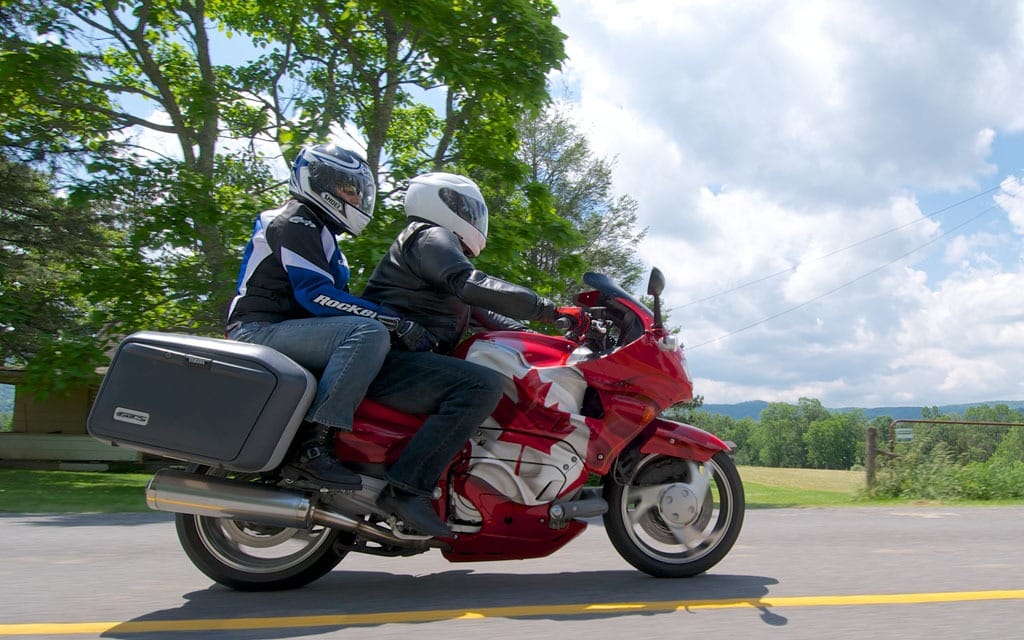 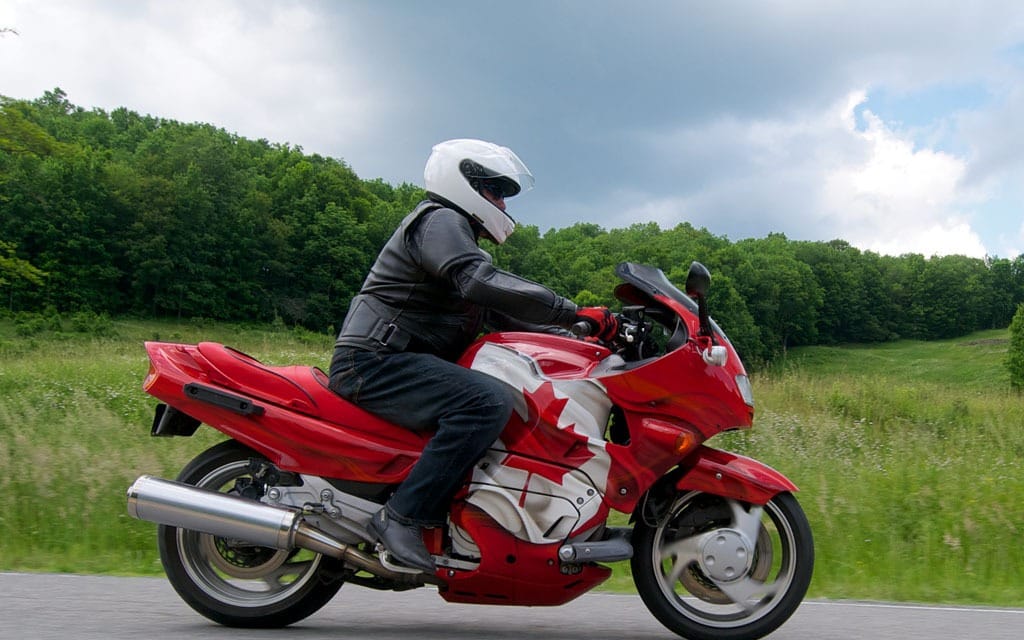 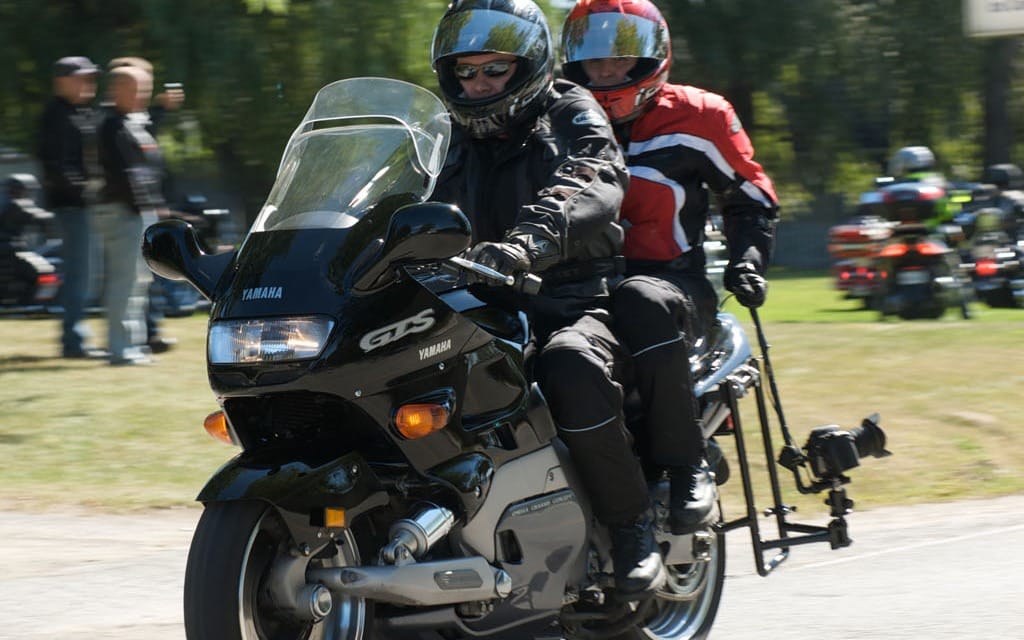 Worst feature:
The seat, of course

With a single-sided front swingarm instead of the traditional fork, the 1993 Yamaha GTS1000 was “a stunning leap forward,” but Cycle Canada testers were confused by the motorcycle’s heavy steering. James Parker, who invented the system, blamed the tires, which like all motorcycle tires had been developed on test bikes with front forks, and might not have been a good match for that front swingarm.

Overall, CC’s testers liked the GTS. “The motorcycle Yamaha has designed around the new front-end technology is a good one, with excellent brakes and suspension, a smooth sophisticated engine, good comfort and a stunning appearance,” they said in the February 1993 issue.

WHO PAINTED THE GTS?
Ottawa Valley Custom Paint, the best paint shop in Ottawa. I had stored the bike for a while, and in the summer of 2012 I took it to a mechanic in Kingston, a guy who’s an ex-Yamaha factory mechanic. He did it up for me mechanically, and then I dropped it off at the best paint shop in Ottawa. I told him what I wanted, and he made some suggestions. He wanted to paint the windshield and I wouldn’t let him, but his second major suggestion—there were many, many talks we had—he said, “Brian, can I paint the frame?” I was leery of that, but after we talked I said what the hell, go for it. And he spent a shitload of time, I’m sure, grinding, sanding, finishing the frame to a smooth surface so he could paint it, and it looks really good. I’m glad I made that choice. Then I sent the Corbin seat out for colour-matching.

HAVE YOU MODIFIED IT?
I put the Corbin on it. It’s a lot harder, but it lets you ride so much longer. I like the fact that the Corbin is a saddle, there’s a big cup to hold your ass, and the same for the passenger. It works well for touring, although I put the stock saddle on for around town because the Corbin has a fairly sharp edge and cuts into my leg when I come to a stop and put my leg down.

I’ve done some things on the bike that were suggested on the GTS forum. I’ve taken the tank off and had the inside painted so it wouldn’t rust, and I used a Dremel tool to cut out the stupid unleaded gas restrictor, just because I hated having to thread the friggin nozzle down through that little hole. I added an MRA tinted windscreen from Germany; it looks cooler and works better that the stock item. I put on some PIAA lights to compensate for the low-output headlamp. The brackets were custom built by a fellow GTS owner in the States. The stubby stock mirrors I replaced with longer BMW 1100RS stalks so I could finally see past my elbows. And I threw away the original horn and put on some automotive Fiamm units.

WHERE HAVE YOU GONE ON IT?
I’ve had it down to Colorado twice for GTS rallies, and I’m sure I’ve had it down to the Maritimes. This past summer, I rode to West Virginia for another GTS rally, and I discovered that every road in West Virginia is a good motorcycle road. That front swingarm suspension is still a treat to ride.  Even riding two-up I was getting it over to maximum lean angles in the corners.

SO IT’S GOOD FOR TOURING?
I love it. It handles so well, the brakes are superb, and it’s got a very tractable, high-torque motor. That’s the good news. The bad news is it’s heavy and the fuel injection is glitchy. Back in 1993 the programming wasn’t fine-tuned, so it’s really glitchy and you have to have a really steady throttle hand.

BUT IT’S COMFORTABLE.
Yeah, it is. I would say that one and the Yamaha XJ650 that I had, the ’82, I had one of those and it had the most spot-on seating position I’ve ever ridden, and the GTS is right behind it. It’s my second-most favourite bike in terms of riding position.

YOU HAVE JAMES PARKER’S AUTOGRAPH ON IT.
On the front swingarm. He came to the rally in Colorado in 2008 and someone got him autographing bikes with a Magic Marker, so he did mine. I’ve had it lacquered over, so it’s permanent.

SHOOTING FROM THE HIP
Brock and Lisa Crawford love motorcycles, particularly Brock’s black GTS (his red GTS is in the living room). They also love photography. When Brock fashioned a frame out of copper pipe that would hold the camera where a saddlebag normally goes, he made it possible to harmonize their interests in an unusual way. While he steers the bike, she steers the camera, using a long handle attached to a tripod mount. She can fire it remotely and even check her shots with a remote viewfinder.

They use a Nikon D300 with a short zoom lens for on-bike photography. “It’s got a magnesium body so it’s rugged,” said Lisa, “and we thought we’d test the system with that before we put the good camera on it.” On the same West Virginia GTS rally where they met Brian Pitman, Brock got the bike leaned over far enough to scratch the mounting bracket. “I’m like, ‘It’s hitting the ground!’” said Lisa. “‘You’re over too far!’ and he’s like, ‘What?’”

Brock says the handling of the GTS takes a little getting used to. “Initially, it feels heavy, and at slow speed you’ve got to be careful. A lot of guys have dropped theirs in parking lots because the steering isn’t as easy as you’d think. Once it’s moving, it takes a little more counter-steering to put it into a corner, more pressure than a normal bike, but it’s almost linear, and wherever you put it, it just stays there. When you hit a bump or something, it doesn’t shake the head. It was almost a bit unnerving when you first rode it, because you weren’t getting the feedback from the road, but when you got used to it and trusted it, it works beautifully.”