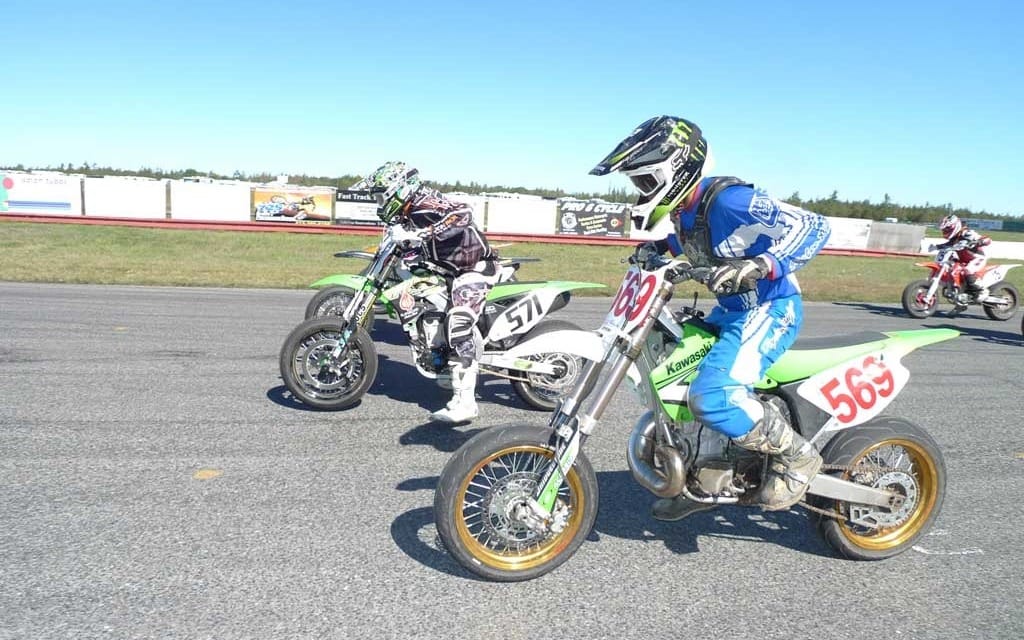 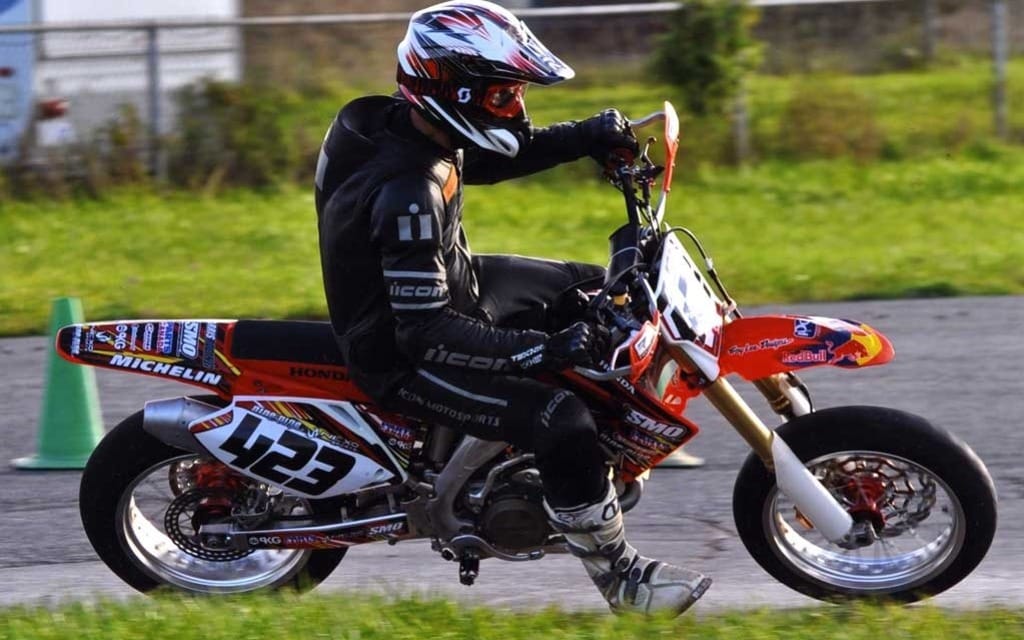 Neil Graham thought supermoto racing was dead. He couldn’t have been more wrong
“You’re doing it wrong,” says Dave Arnold after watching me ride supermoto for the first time. Arnold knows what he’s talking about. He’s won six Canadian titles, and so as I queue up for my second practice session, I run over his advice in my head. “If you don’t get forward on the seat [for the corners] you’re going to highside and hurt yourself,” he tells me. And then Arnold, who isn’t racing at the Supermoto Ontario event but who has borrowed a bike for a few practice laps, suits up, hits the track, and promptly highsides and snaps his wrist.

I’m not discouraged after Arnold’s accident—the Honda CRF450 that Arnold crashed is the backup bike for Sam Harris, and not Arnold’s regular mount. It’s also the bike I’m racing this weekend. What’s confusing to a pavement rider like me is supermoto’s peculiar mix of equipment and technique. The tires are fat slicks with a grooved centre section mounted on 17-inch rims—so my default cornering technique is to do what I do on a sportbike: hang off to keep the bike upright and on the meaty section of the tire. But when those tires are mounted on a motocross bike, classic supermoto technique is to do what you’d do on a motocrosser: slide forward on the seat and push the bike down into the corner.

I’m not necessarily going any faster, but I’m looking less like a road racer than I did at the beginning. Which is good. What’s not good is my complete lack of comprehension at what to do when I hit the jumps. In its supermoto configuration, Shannonville’s roadrace track adds a hard right at the end of the front straight that leads to a mound of dirt. From up high in the grandstand, where I first see the infield dirt section, the jump looks about knee high, but from the vantage point of the saddle of a motorcycle, it looks like you’re riding into the side of your garage. I’m tentative in my first few attempts, but during practice I pass a rider on the paved section, start to feel good about my improving pace, round the kink and then yell in my helmet—in my haste to keep the passed rider at bay I’d completely forgotten about the jump. But I’m on it so quickly that there is no time to react other than to scream. Up and over I go, and while the height of my jump is laughable by motocross standards, to me, a non-motocrosser, it feels like I’m in the air for an eternity. I land inelegantly, swing through a left-hander awkwardly, flip-flop over a few smaller jumps and then surf around a long right-hander that marks where the course leaves the dirt and rejoins the paved roadrace circuit. I sigh in relief. But then hold my breath as I fly up and over a steel ramp that sits in the middle of a short straightaway.

In short, I learned that supermoto is amazingly fun.

For a time it looked like supermoto was going to be the next big thing. It was big in the U.S., and here in Canada it attracted the best dirt trackers and road racers. In its heyday, a race on Toronto’s waterfront attracted a slew of competitors and spectators, and then the recession hit and supermoto died. But not quite. Supermoto simply returned to its grass roots. And that’s a good thing. Supermoto Ontario’s Shannonville event is low key, and, to my eyes at least, devoid of the kind of petty infighting that characterizes so much of the motorcycle racing community.

Practice sessions aside, I prepare for my first race. My problem is that I’m quick enough on the tarmac but suck over the jumps, especially that first big one—I’m concerned that if I get ahead of someone just before the jump they’ll either ram into me as I slow for it or land on my head at the end of it. My heat race plays out pretty much as expected. I’m in the hunt but back out of passing late on the tarmac section, yet manage a fourth-place finish two seconds back of the winner.

A supermoto bike, in the hands of brilliant riders like Dave Arnold, is a beautiful thing to watch. Arnold’s long, sweeping slides down to the apex of a corner are awe inspiring. My talent pool, sadly, does not come anywhere near to that of Arnold’s, so where he slides, I slither. My (lack of) technique isn’t much to look at, but I doubt that anyone is having more fun than I am. Even the fact that I stall the bike on the line in my final isn’t enough to taint my experience. (I was thinking of that big jump when the flag flew and not of the reality of releasing the clutch smoothly—just like the outfielder who drops the pop fly because he’s thinking about the throw to home to catch the runner on third who’s tagging up.) Supermoto Ontario has a class for all skill levels and if you’ve already got a motocross bike in your garage you’re a set of rims and tires away from having the time of your life.