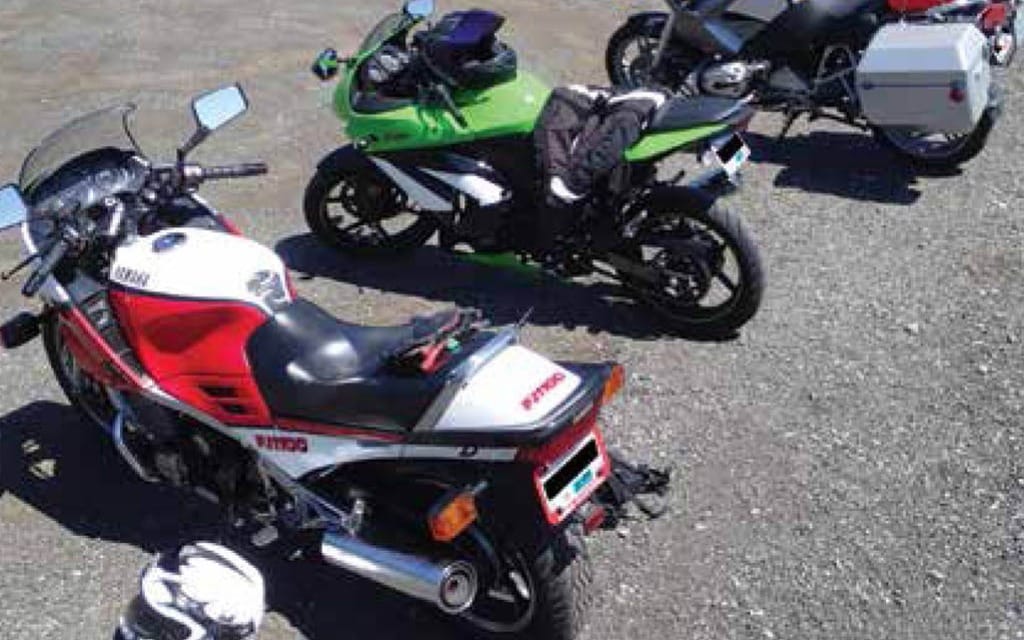 After riding dirt bikes for most of my life, I used a summer day on Vancouver Island to write (and pass) my learner’s motorcycle test. Though it was my father who introduced me to motorcycles 19 years earlier, he seemed unsure of whether to be happy or horrified that I’d decided to use such a dangerous mode of transportation.

Happiness won out in the end; he lent me his BMW R1200GS to practice on. Being used to a featherweight Sherco trials bike, to me that BMW felt like a foreign beast. I’m five foot ten and couldn’t flat-foot the Beemer, but I passed the road test and the bike survived with only a dent in the side panel and a scratch on the engine guard (sorry, Dad).

Later that summer a friend with a Honda CBR125R approached me about a road ride and I agreed to go along—after getting permission to borrow the GS, of course. With the help of Google Maps we plotted the most interesting route we could. The plan was to follow the highway out of Port Alberni to Nanaimo, where we would take Nanaimo River Road to Lake Cowichan. From there we would follow Pacific Marine Road to Port Renfrew, continue on the West Coast Road to Victoria and then take the highway home. Departing at 8 a.m. should’ve left plenty of time for the trip.

The ride began uneventfully, with the little CBR out front to set the pace, my friend tucked in with the throttle wide open, slowly inching past cars that were barely doing 100 km/h. For my part, I put the GS in sixth gear and enjoyed the scenery. After a break in Nanaimo, we headed down Nanaimo River Road. It was old and twisty—just what we’d hoped for. Then it turned to dirt. We stopped and I asked my friend if he was comfortable leaving the pavement. We decided he would lead and we would turn back if things got too ugly.

If the 125 looked out of place on a highway, it was absurd on an unpaved road. Compacted dirt gave way to gravel and rock, while my eyes kept wandering to the skinny tires on the CBR. My friend was doing his best to navigate what was quickly becoming an old logging road. Those bicycle-like tires were not meant for such conditions. Then, like a mirage, pavement appeared before us. We took a break and joked about how this was not the route that Google had led us to believe.

We were happy to be back on a solid road, but that happiness was short-lived; a few minutes later the pavement crumbled back into gravel. We soldiered on until we reached an obstacle that neither bike could overcome. From one side of the road to the other stood a gate. Hope of passing it died when we saw the lock and the rocks piled at either side. My Sherco would’ve had no trouble climbing the rocks, but there was no way I would risk dropping the BMW. We turned around and retraced our route.

Stopping in Nanaimo, we confirmed that we had followed our route properly and that Google Maps had deceived us. Well behind schedule, we resolved to take the highway to Lake Cowichan and my friend got his CBR back up to teeth-rattling speeds. Upon reaching Cowichan, we grabbed a bite and remounted, making our way through a sea of cruisers, tourists, and pedestrians. I didn’t mind the traffic; our goal was in sight. We were about to find out if the West Coast Road was worth the journey.

We found the unassuming little turnoff that was the beginning of the “highway” to Port Renfrew. Calling it a highway is generous—it’s really just a paved logging road—but it was my first chance to really lean a bike through corner after corner. That bumpy, cracked pavement gave me a taste of the pure enjoyment that you can feel on a street bike. When we finally made it home 12 hours after departing, I didn’t care that it had taken longer than planned.

Today I own a Yamaha FJ1100 and my friend has a Ninja 250. We’ve ridden the West Coast Road again, but our second trip was less eventful. Sometimes a misadventure is more fun—and certainly more memorable.

First Person is dedicated to readers of Cycle Canada magazine. Tell us about a motorcycle trip or experience you won’t soon forget. Contributors will be paid $100 upon publication. Send 1,000 words and a photograph to cyclecanada@editionsjeanrobert.com.