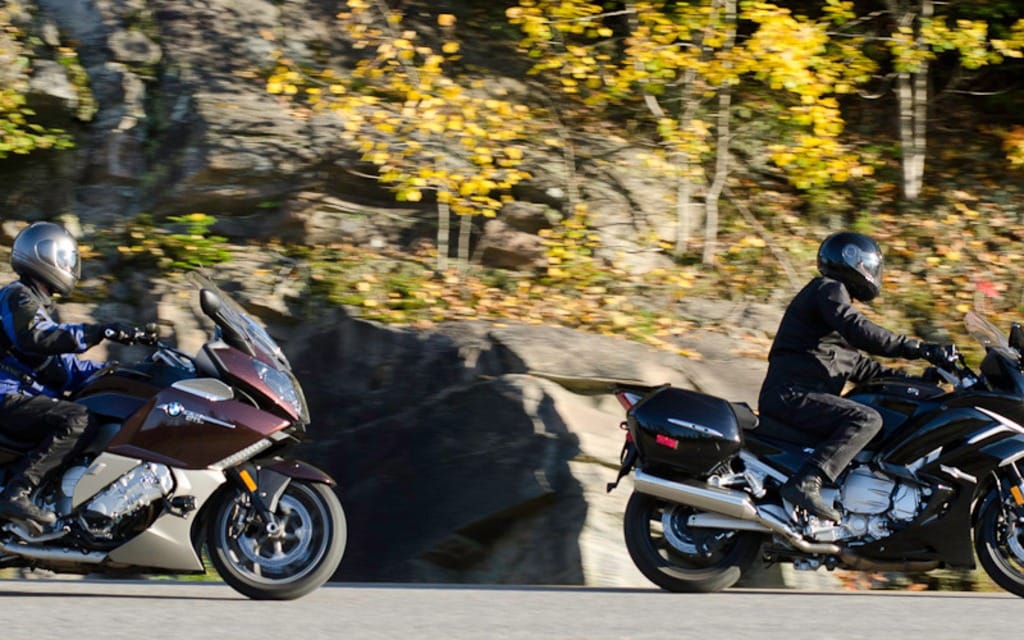 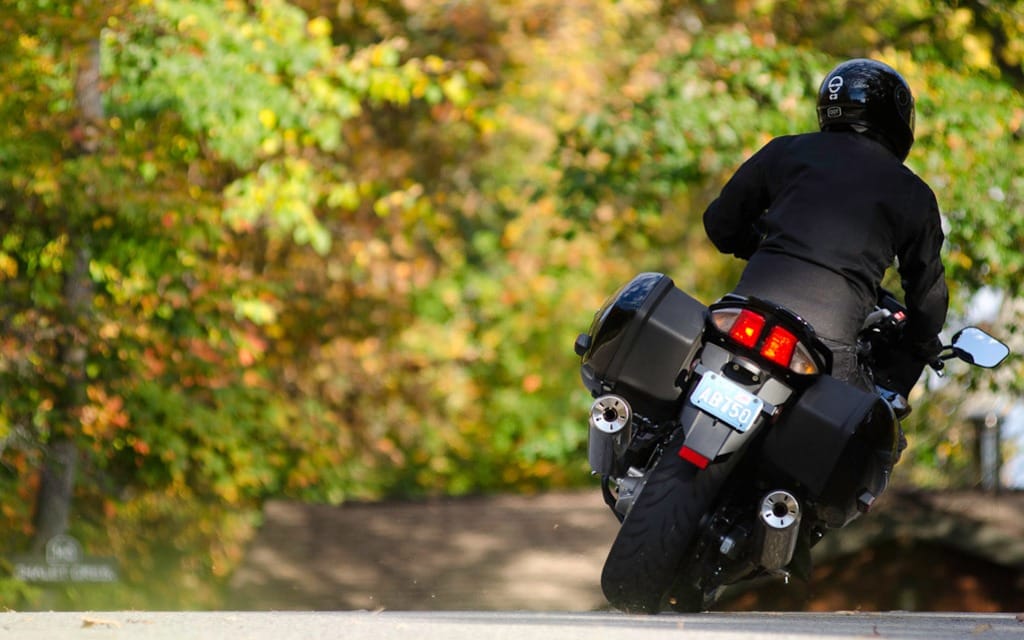 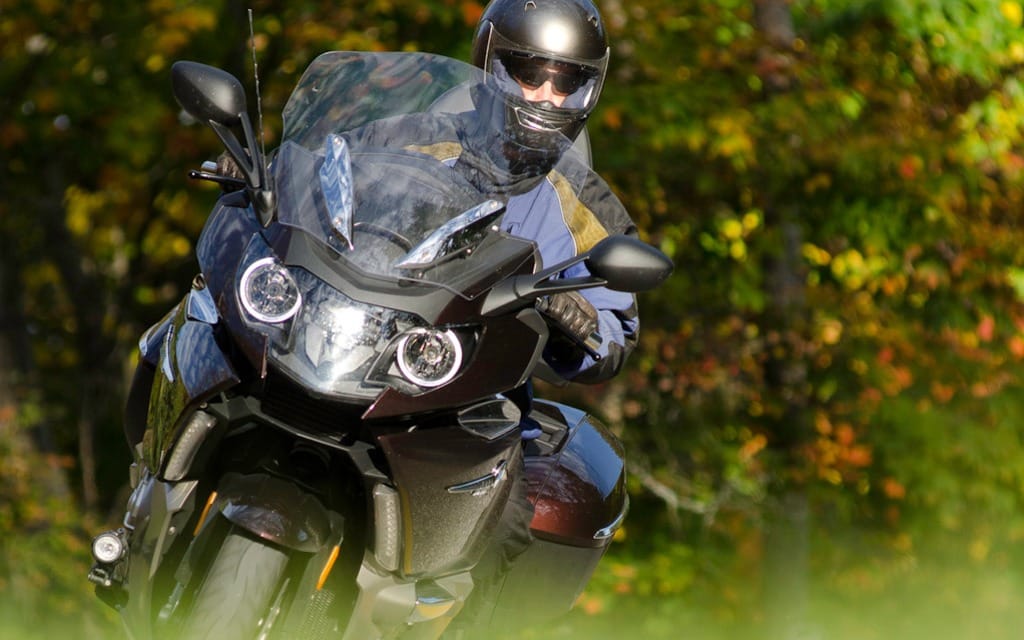 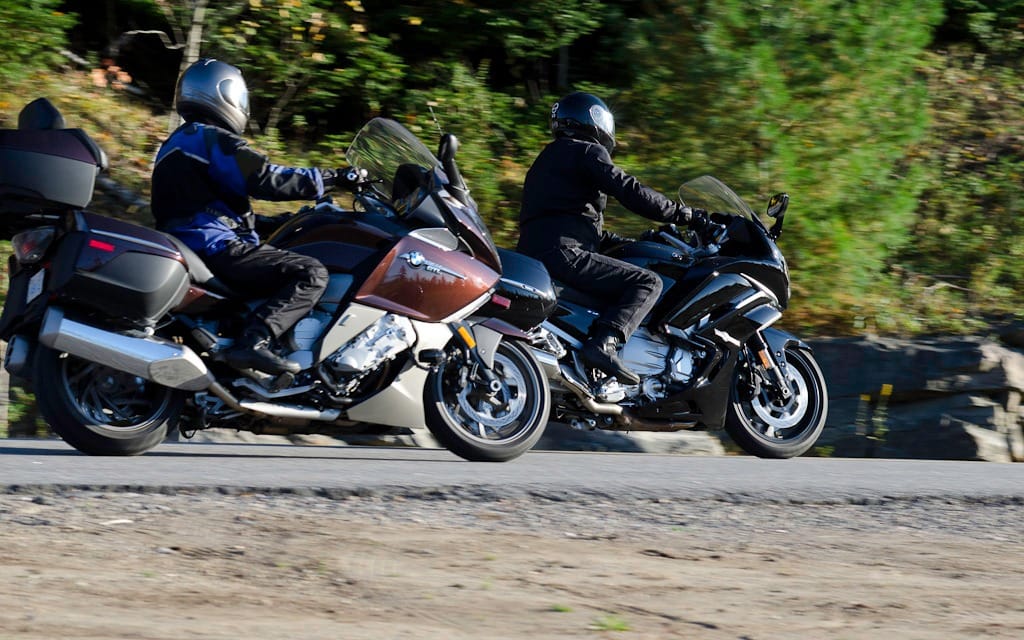 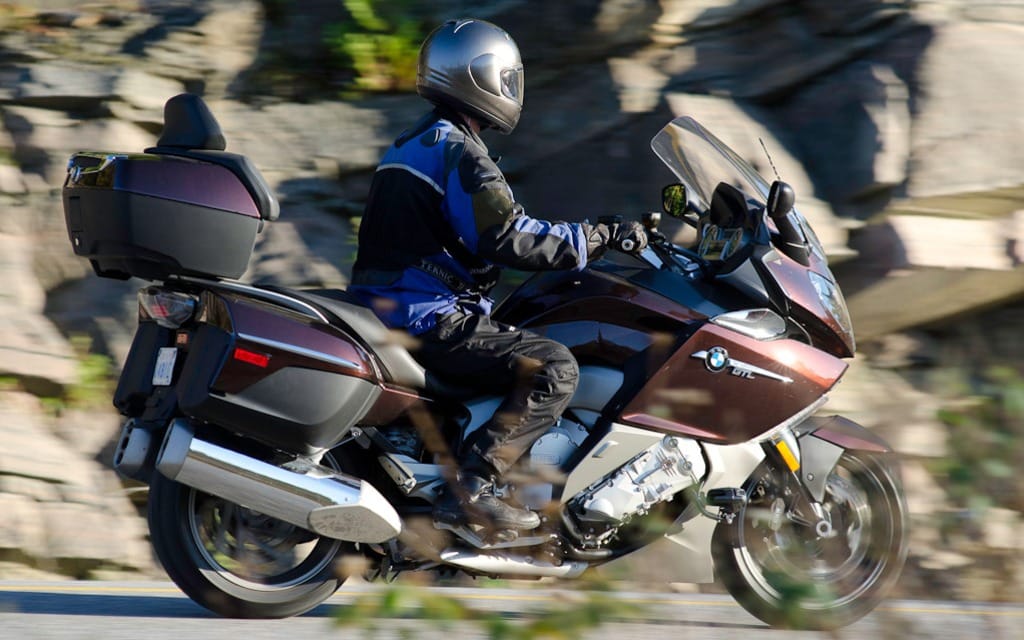 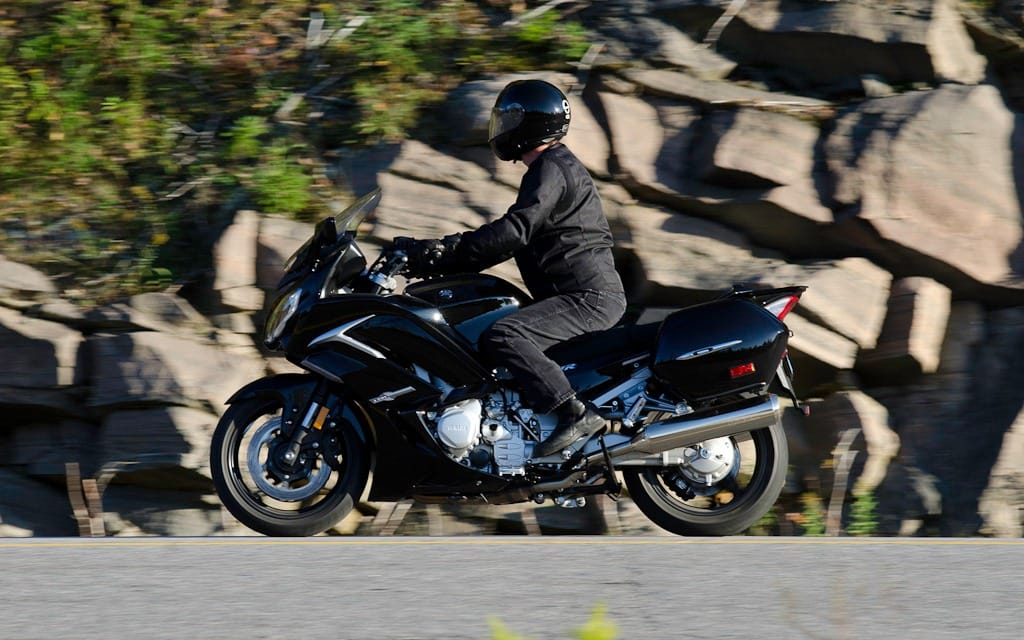 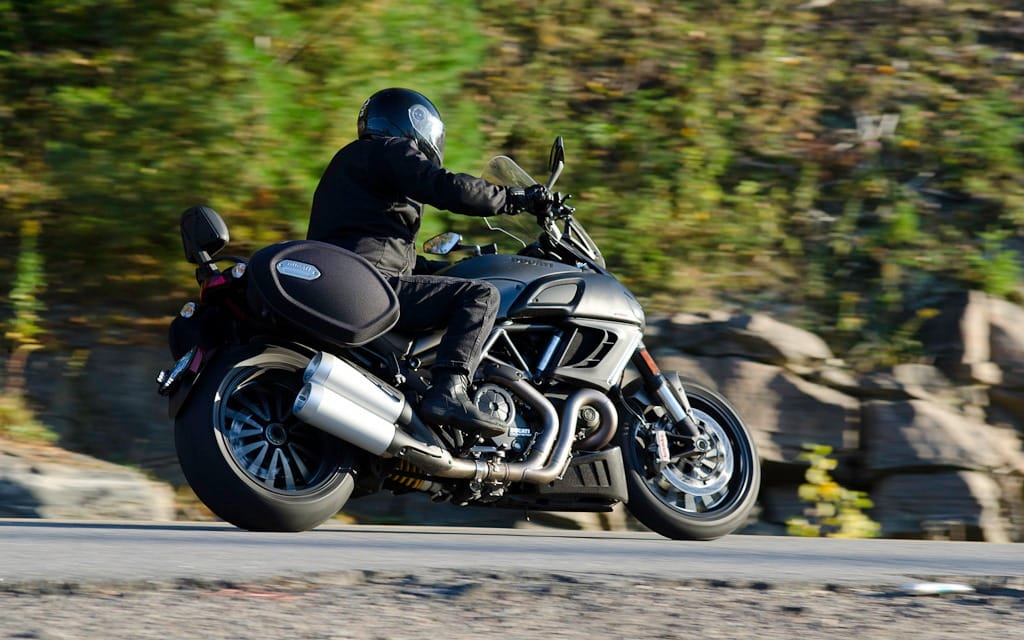 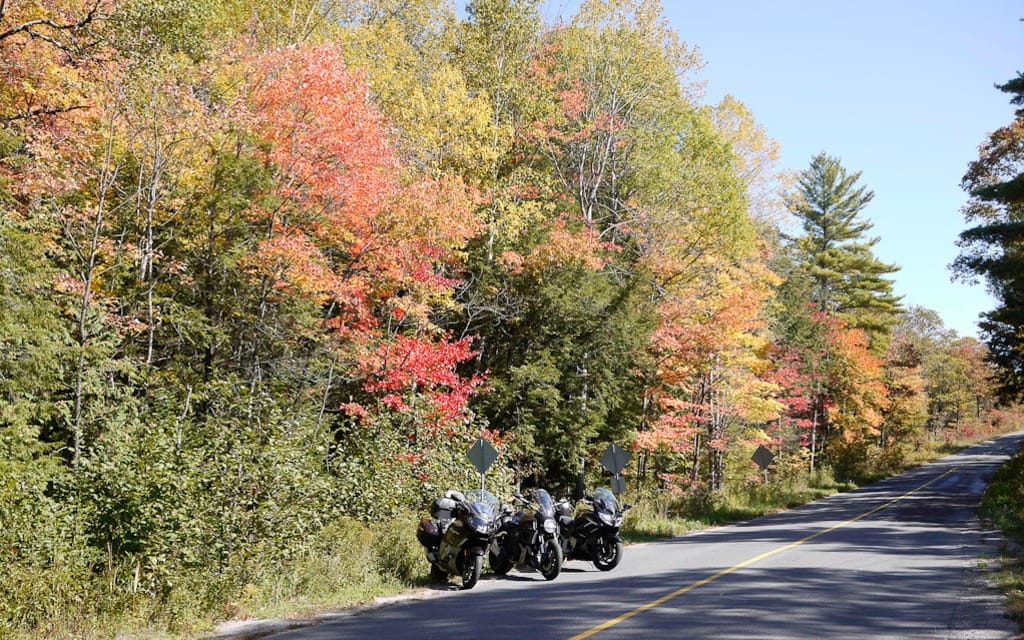 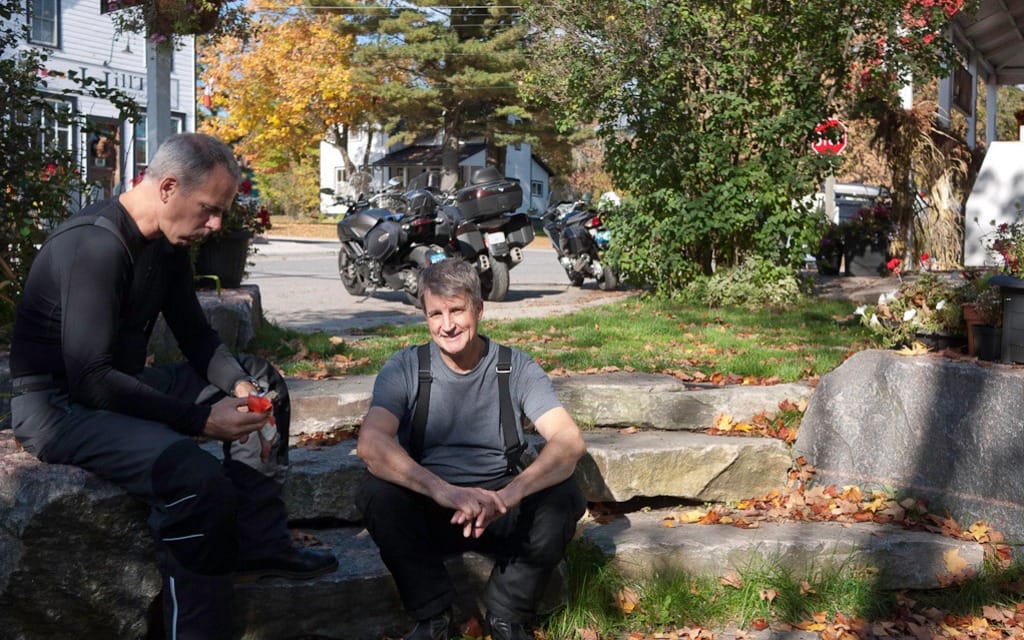 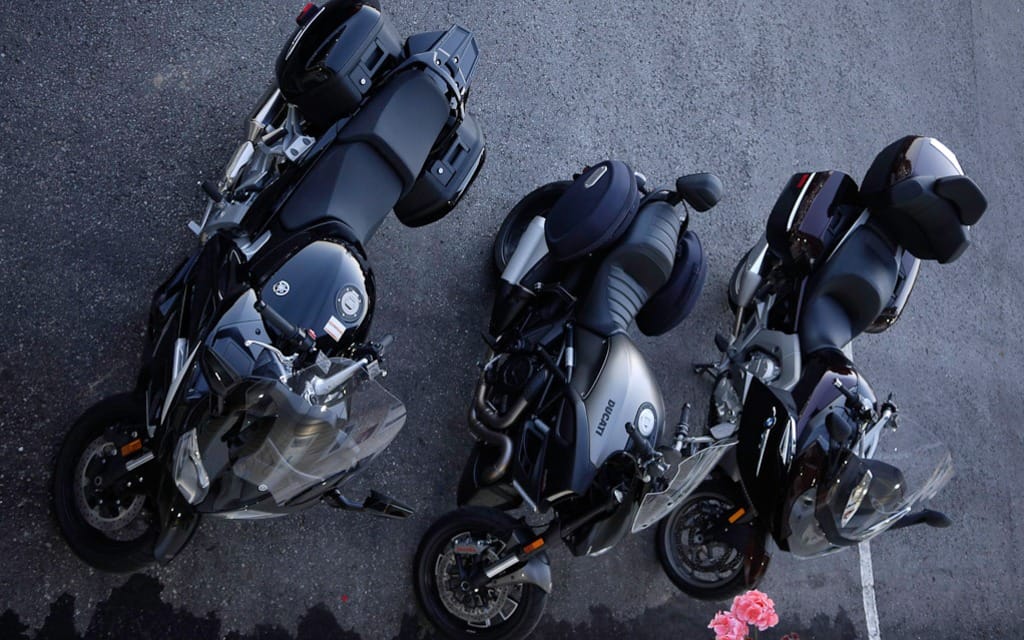 The Cycle Canada crew gets its fill of twisty pavement on an annual adventure, and someone finally did something about the weather
By Steve Thornton
They say if you ride the 401 long enough, you will crash on it. That’s a good reason to get off the damn thing as fast as you can, and so with CC contributor Tim Poupore riding pillion, I drew a line from Port Hope to Toronto and didn’t let anything short of a solid wall of traffic slow me down. The 401, for those who are lucky enough to live somewhere else, is an over-crowded bitch of a highway, a rolling thunder cascade of semis, tailgating autos, and drivers so bored with the task of driving at high speed in a straight line that texting actually helps them pay attention.

Okay, maybe I crossed a line there, but you get my point. It’s the last place you want to take a sport-touring motorcycle. But with Poupore behind me and all that traffic around us, I enjoyed the ride. It was the final day of our annual Fall Tour; we had awakened at the Waddell Inn (a CC crew favourite) in Port Hope and departed after consuming good coffee and an unfortunately sensible breakfast. I wasn’t looking forward to ferrying Poupore around on the Yamaha, in part because its seat is so wide that my legs have trouble finding the ground. But to his credit, Tim knows how to sit still and lean with the rider, so his presence was hardly noticeable behind me. The FJR1300 poured out distance-gobbling power and made threading the 401 traffic-needle easy.

Sooner than I had expected, we hit the Big Smoke. Fall Tour 2013 was over, and the last ride, unexpectedly, had been a pleasure.

A hundred twenty-five kilometres north of Toronto, at 12-noon three days earlier, we had turned onto Hwy 13, Neil, Tim, and me, with three good motorcycles, good weather (a Fall Tour rarity), and high expectations. For those unlucky enough not to live near 13, it is 33 kilometres of curves — the sign actually says that — with almost no traffic, generally good sight-lines, frequent minor elevation changes, and few driveways. We knew that going in, but we started slowly, Tim on the FJR, Neil aboard BMW’s K1600GTL touring bike, and me on Ducati’s wonder-cruiser, the Diavel Strada. Feeling our way.

Neil led, as is usual on a Fall Tour, and soon the road demanded higher speeds. There are few places on 13 where the pavement straightens long enough for you to sit back and relax, but on that early October day with the sun shining, the air just warm enough, and the surrounding forests a swirl of red, orange, yellow, and holdout green, the rare straights allowed us brief chances to appreciate the views.

After a break for lunch in Bala, we headed down 188 East through Port Carling and toward Milford Bay. The roadmap promises scenery here, but the road was dull. Neil turned around, and we followed him back out through Port Carling and onto a smaller two-lane highway, 7/632, and turned north toward Rosseau. Now the road looped into a countryside turned fiery with fall colours and we streamed through extended twisty sections along the shores of sparkling lakes, unfettered by traffic or pavement, simply enjoying the motorcycles, the road, and the season.

A display of pumpkins and fall vegetation in front of the Rosseau General Store would have proved that autumn was on us even if the nighttime temperatures didn’t, but we had come to the Muskokas and, later, the Haliburton region, during the last best days of fall, with daytime temperatures just warm enough for shedding jacket liners and sunshine that lasted all day. In early October there’s not much traffic in cottage country, and our romps down twisting two-lane roads were disturbed only a few times by locals who didn’t have the sense to speed up in the curves.

It was warm enough, in fact, that we procured some ice cream at the General Store and sat in the sunshine to eat it. Then, with white mustaches and cooled bellies, we mounted up and set off for 141 East, another two-laner that provided some nice views and long, fast curves. We had swapped bikes, and I rode the BMW, while Tim had the Diavel and Neil the FJR, and once or twice he disappeared in front of us, pushing it, or maybe just hoping for a few moments alone. He got that. Even in equally skilled hands, the Yamaha would leave the other two bikes behind on a twisting country road — though neither the BMW nor the Ducati would embarrass its rider.

From 141 we turned onto Hwy 10 at Port Sydney and journeyed north a short distance to Huntsville, where we would spend the night.
We got a late start the following morning, but in glowing sunshine and warming temperatures we set out, heading east for the Haliburton region, another area of twisting roads and cottage-rimmed lakes.

Hwy 60 heads out of Huntsville on smooth, wide pavement that soon narrows and turns north into the wilds of Algonquin Park, but we didn’t want wild, we wanted curves, and we were a trio of men well past our forties, so places where those two qualities might merge would only give us headaches, or heartbreaks. Not taking any chances, we steered south on 35, sliding under the park and after a photo stop at Boshkung Lake, we caught 118 and veered eastward toward Bancroft and a leisurely meal at a decent sandwich shop.

From Bancroft we headed back west into the afternoon sun, but traffic was light and there were still places where curves and pavement combined to produce a smooth, sensuous ride with lilting horizons. Our purpose now was to get south, back into the corridor of traffic flowing east-west from Toronto to Montreal, and we barrelled along 118 to 503 and turned southward, then at Gooderham caught 507 and its even more southerly course. Past Catchacoma and Mississagua lakes, then 36 towards Bobcaygeon, 7 south to Omemee, and then finally over to 10 and south to Port Hope and the Waddell.

There were times on these roads when Neil would crest a hill in front of me, the road shaded and lined with forests and the far distance out of focus and lit up by the sun, and that one man on a motorcycle, framed by dark tress and silhouetted against the bright beyond, had me wishing for a way to stop time, get off the bike, grab an SLR with a 300 mm lens, and shoot the hell out of that scene. But those moments were rare. Much of the end of the tour was ridden into the sun, sometimes painfully. There were curves and lonely sections of road, even some nice views of valleys spread out beside and below us before we hit Port Hope, but despite some fine stretches, day two was a less sporting adventure than day one, with its twisties and fast curves around the towns of Bala and Rosseau. We traded bikes frequently, so each of us spent time on the Diavel (explosively loud, comfortable, and wickedly powerful), the FJR (smooth, fast, also comfortable, and most resembling a sportbike), and the GTL (also smooth and fast, but more removed from the road and environment with its touring-bike size and heft), and we found that all three bikes made good mounts in these varied environments and none was uncomfortably harsh or restricting by the end of the day.

We had started well, and if we were forced to quit after one day, we would still have managed to ride the best roads, though there are delights to be found in the Haliburton region east of the Muskokas. And of course the Waddell is a fitting end to a traditional Cycle Canada ride.

But while some of the roads were thrilling and others were simply pleasurable, it was the weather that really crowned this Fall Tour. It’s so hard to predict fall weather, and we’re so often left to ride under dripping skies that rain and grey days seem to be necessary elements of these tours. For 2013, however, we caught a break, and as we left Toronto on that Tuesday morning the blue sky and sunshine and gently warming temperatures predicted what we would experience throughout the tour. But the weather that had occurred before the tour was just as important, with cold nights and shortened days depleting the green chlorophyll in leaves, and when we arrived in Muskoka and, a day later, Haliburton, the abundant forests of deciduous trees were alive with colour. We’d ride through a forest of red and orange leaves, and then we’d come upon one or two maples so vividly and deeply red that they almost looked purple, red enough to stand out in a forest of fall-brightened foliage.

None of the bikes was like that, none stood out so vividly that each of us yearned for our chance to ride it, but Hwy 13 in Muskoka was certainly a standout, and there were some sections of road beyond 13 where pavement dipped close to a lake and writhed around the shoreline as if it had been laid down too hot and had contracted as if cooled, and those bits of road also stand out in the memory. And that’s what a Fall Tour is meant to do, leave you with bits of riding-memory, flashing colours and leaned-over motorcycles and the sheer joy of an empty and undulating highway in front of you and a warm fall sun behind you.