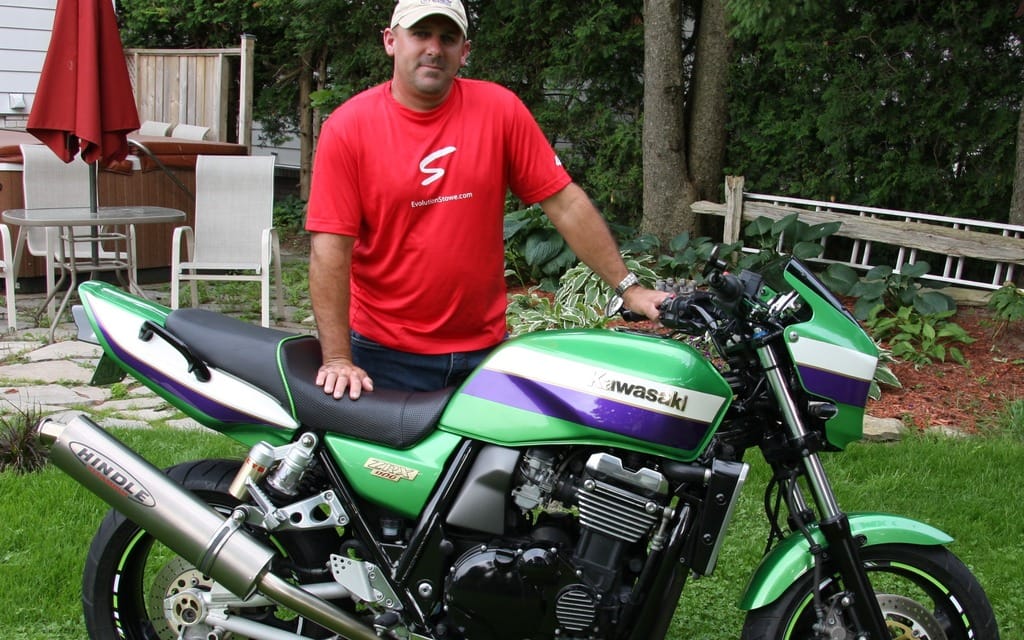 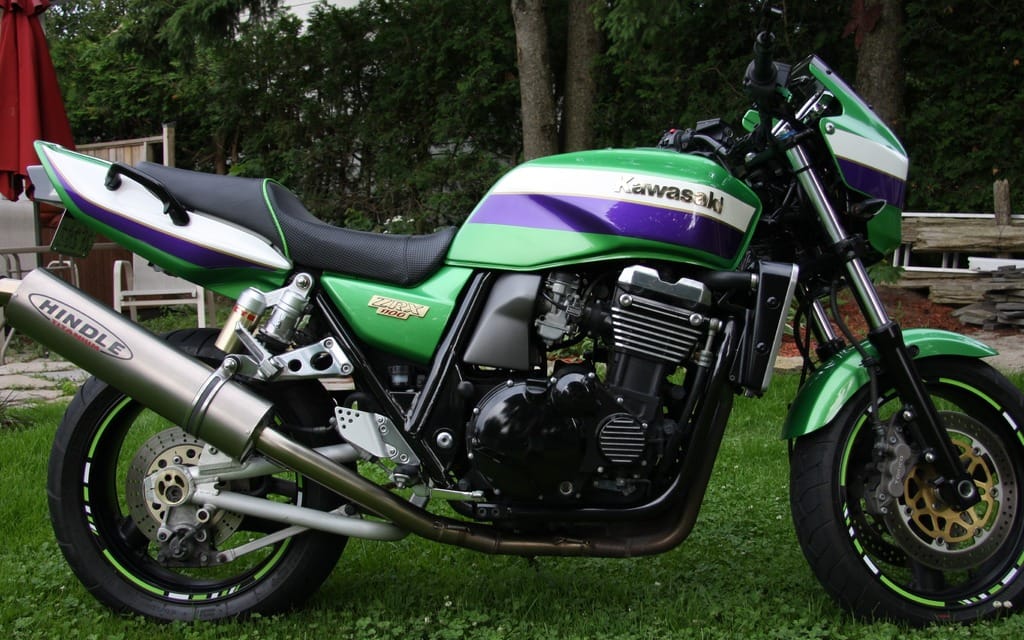 YEAR:
1999 (bought in 2010)
PURCHASE PRICE:
$4,500 (new price: $11,000)
ODOMETER:
36,000 km when bought, 47,000 km now
BEST FEATURE:
Nostalgic muscle-bike looks
WORST FEATURE:
Weak suspension and weight
As you can see in the Back Pages sidebar, Kawasaki’s ’80s–superbike look-alike was quickly identified by the Cycle Canada staff of 1999 as a kind of punk rocker, something with a sense of the nasty and the bare-muscled wife-beater looks to go with it, even if when push came to wheelie, it was a bit porky and could back up its tough-guy appearance only in limited circumstances. The ZRX might make you feel like Eddy Lawson or, better yet, the Canadian champion Lang Hindle (note the pipe on Mr. Ellery’s example), but to push it quickly around a race track you’d need Lang’s talent, for it’s a heavy motorcycle with an old-style tube frame and weakly sprung suspension. Still, if you don’t have Lang’s abilities, you can have Eddy’s good looks just by putting your ass on
the big green Kawasaki. It’s a real charmer. It’s also a big-bore four with loads of torque and a bucketful of horsepower, the kind that takes readily to wheelies and stoplight blitzes. And if  you don’t mind the crude behaviour, says our Man + Machine subject, the Kawasaki can be ridden hard down a twisty back road. As we said, it’s a punk rocker.

HOW DID YOU COME TO OWN THE ZRX?
About 13 years ago, I bought my father’s vintage 1979 Kawasaki KZ1000 MK2, which he bought brand new. I bought it off him for a very small price, but it sat in storage for about eight years, while the kids were growing. About four years ago I pulled it out of the shed, and did some upgrades on it, but every time I drove it there was something else going bad on it. It was like, this bike’s old, it’s not a bike to go out for a long ride on. But there was that one bike that I’d always seen, the ZRX, and so I started flipping through the ads on Kijiji, and I found one close by, but they wanted a decent price for it and I didn’t have that kind of money. So I thought I’d just sit on what I had, but then I learned by surfing the Internet that the bike I was sitting on was worth
a fair chunk of change. So I put it on Kijiji and within two or three days I got a call from a collector. He offered what I was asking, and I was able to buy the ZRX and pay for my first year’s insurance. So it was fantastic. What a score. Of course, that upset my father and my step-mother. They were mad at me for about, oh, probably about that summer anyway. They were like, “Oh, we loved that bike,” and I’m like, “Yeah, but you weren’t driving it anymore.” So they finally got over it.

HOW WELL DOES IT HANDLE?
Great. I’m not a race–track kind of guy but I can lead the pack on a spirited ride through some twisties, and have a pretty good lead on the guy behind me. For a heavy bike, it’s surprising how well it handles. As soon as you get it up to speed it just lightens right up. It’s flickable in the corners. As long as there are no bumps in the corners, the suspension might get upset.

YOU DON’T LIKE THE SUSPENSION?
No, it’s old-school technology. That’s the one thing that most guys focus on changing. It just gets a little unsettled if you push it into a corner too fast. If you upgrade the suspension to Öhlins it takes care of it, but that’s expensive.

HAVE YOU TOURED ON IT?
No, my biggest trip so far was 735 km in a day. That was a big loop around eastern Ontario, around the Haliburton region.

HOW WAS IT FOR COMFORT ON THAT RIDE?
Butt-numbing. That was my only complaint, so I had the seat modified. I sent it down to a gentleman in New Hampshire, and he modified the seat to a more modern, flat kind of shape, because the original seat had a slight crown, and that just numbed your crotch area, and after a while you felt your legs kind of disappearing. But now it’s great. Much more comfortable.

HAVE YOU MODIFIED IT?
I’ve done some light modifications. I swapped out all the turn signals for LED’s. I removed the rear turn signals and put in an integrated tail light that has the turn signals built into it. It just cleans up the tail section, and I took out the mud-guard section that rolls out past the back wheel there, I cut it back and put a pan in underneath to clean it up. You can buy kits that do that, but being a machinist, I’m like, I can make that. The Hindle pipe was on the bike when I bought it. It’s a nice add-on, it probably shaved about 30 pounds off the bike. It also has a four-degree advance on the timing, which makes it much more lively at around 3,500 rpm. It has K&N filters. It’s just lightly modified.

WHAT KIND OF TIRES ARE YOU USING?
It has Pirelli Diablos. I got a great deal on them, but I don’t like them. I had the Michelin Pilot 2CT’s on there before, and they seemed to be a much nicer tire, a little more confidence in the corners. These are just the base-line Diablos and I find them a little greasy in the corners.

HOW ARE THE BRAKES?
Awesome. There’s so much stopping power, when I first bought it I had to be careful. The six-piston calipers up front are just nasty.

HAS YOUR WIFE RIDDEN ON IT?
Ronda, yeah, I got her to do about three kilometres on it one day.

DO YOU STILL LIKE THE LOOKS?
Oh yeah, it still makes me smile. It’s not as comfortable as I’d like, with the forward leaning position, and some hard bags would be nice, so I’d like to get a sport-touring bike, but I don’t know if I could part with it.

BACK PAGES
Kawasaki’s new ZRX1100 is a convincing if not exact replica of its championship-winning big-bore superbikes of the early ’80s, which Eddie Lawson rode to a pair of AMA championships before the class displacement limit was reduced to 750 cc. In Canada the mean-green Kawasaki racers were the choice of riders such as Lang Hindle, Rueben McMurter and Rhys Howard. Those early superbikes were brutally powerful considering the state of tire and chassis technology of the time, which helped produce the mythic aura that Kawasaki is able to exploit to this day. Perhaps that’s why we continued to steal admiring second glances at our ZRX test bike: we’ve been strongly imprinted by the original design and can’t help being impressed, even if we know that the green really is
counterfeit. For the most part, the only connection between the new ZRX1100 and those early superbikes is cosmetic.