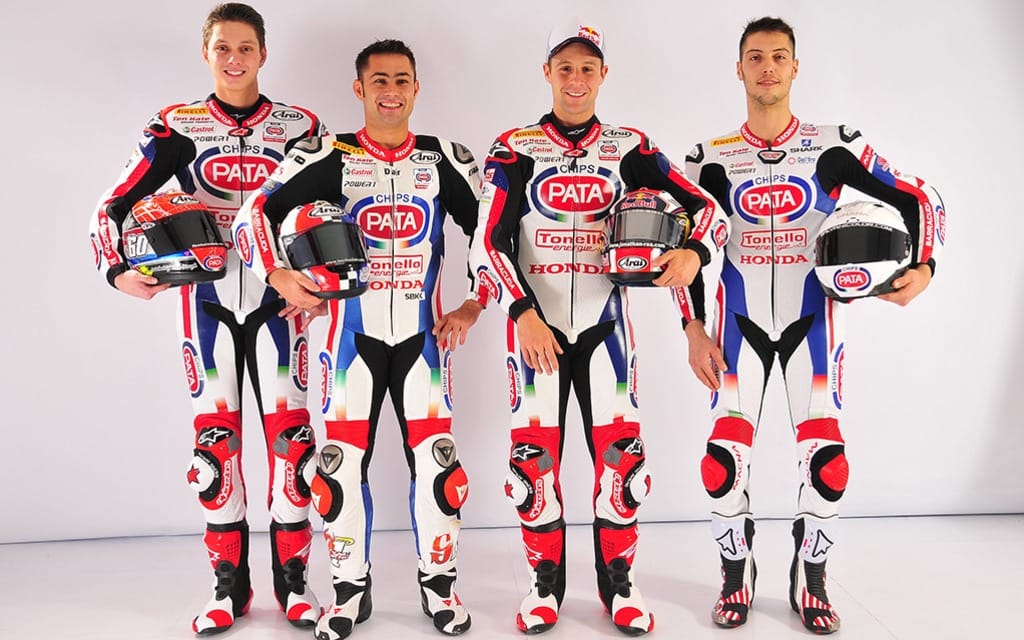 World Superbike team Pata Honda was showing off its 2014 hardware and riders at the recent Motor Bike Expo in Verona, Italy. The look hasn’t changed much, though with a new Honda CBR1000RR Fireblade SP under the decals the team is hoping for better results in 2014.

Riders are the same as last year, with Brits Jonathan Rea and Leon Haslam representing the team in World Superbike, while Dutch rider Michael van der Mark and Italy’s Lorenzo Zanetti compete in the World Supersport series aboard Honda’s CBR600RR.

Team manager Ronald ten Kate commented on a disappointing 2013 season and prospects for 2014, saying, “It’s clear that 2013 wasn’t a great year for us – the riders got injured quite heavily but, in a way, that allowed us to step back and review the whole situation, looking at the bike and what we would be needing for the coming season. We’ve had a big development plan and brought in a lot of parts for the bike. The electronics have been upgraded massively over the winter and we’ve got a good testing program, so I think we can say we’re better prepared than ever before.

“The new Honda Fireblade SP is a good step forward, especially for road riders and those taking it on to the track. We’re already using a lot of that upgraded technology like suspension and brakes, and the engine improvements will be useful too. We’re pulling out all the stops and with four talented and determined riders I firmly believe that we can compete for race wins this season and even two championships.”

We won’t have to wait long to see if those improvements produce results; the 2014 WSBK season gets underway February 23 at Phillip Island, Australia.