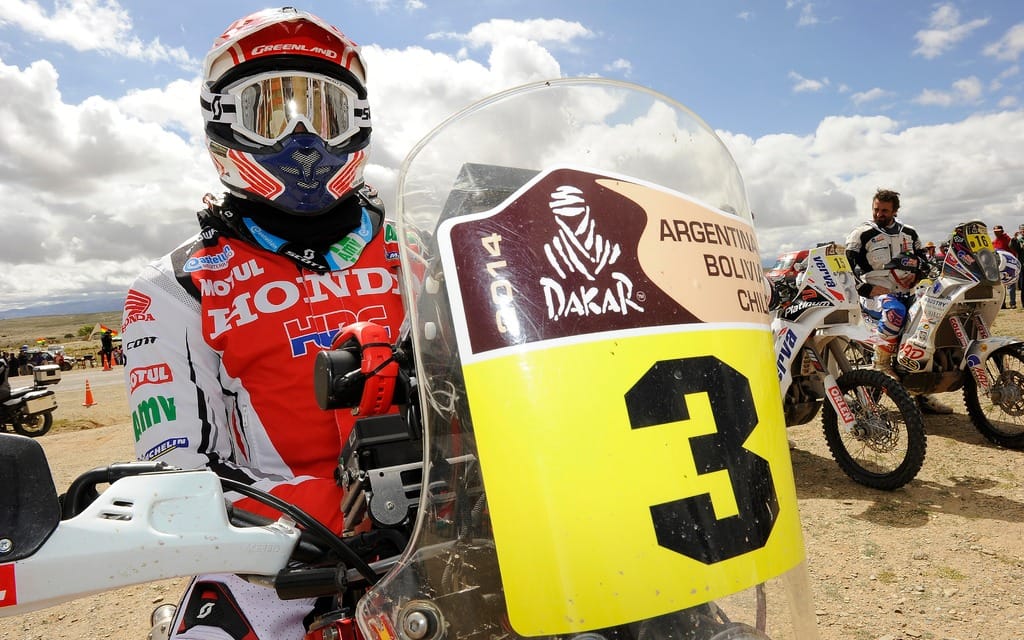 There was sad news from the Dakar Rally last week. Fifty-year-old Belgian rider Eric Palante has died, his body found by the sweeper truck at 8:30 a.m. on Friday along the stage five route between Chilecito and Tucumán, Argentina. Details are scarce, with a release from race organizers saying that the cause of Palante’s death remains under investigation.

After the day’s somber start it was Sherco rider Alain Duclos who was fastest on Friday’s stage six route between Tucumán and Salta. KTM’s Marc Coma had another solid showing, finishing in second place. Frenchman Michael Metge crossed the line third aboard his Yamaha, but incurred a five-minute penalty during the stage, dropping him back to sixth. Honda’s Joan Barreda Bort was then bumped to third.

Saturday was a rest day for the rally, but it was back to business on Sunday for stage seven. Sunday saw bikers leaving Argentina and entering Bolivia for the first time in the Dakar’s history, though the special on the challenging route from Salta to Uyuni was shortened to 309 km due to adverse weather conditions that grounded rescue helicopters. Mountain fog didn’t seem to slow down Joan Barreda Bort, whose stage seven victory was his third stage win of the rally. Marc Coma finished second, while Cyril Despres wasn’t far behind in third.

The story for KTM’s Marc Coma thus far in the rally has been consistent finishes, a fact that sees him sitting atop the general rankings through seven stages. His stage seven win brings Honda rider Joan Barreda Bort closer to Coma overall, but only just, as he’s still 38:14 back of first place. KTM’s Jordi Viladoms is currently third in the overall standings, more than an hour behind Coma.