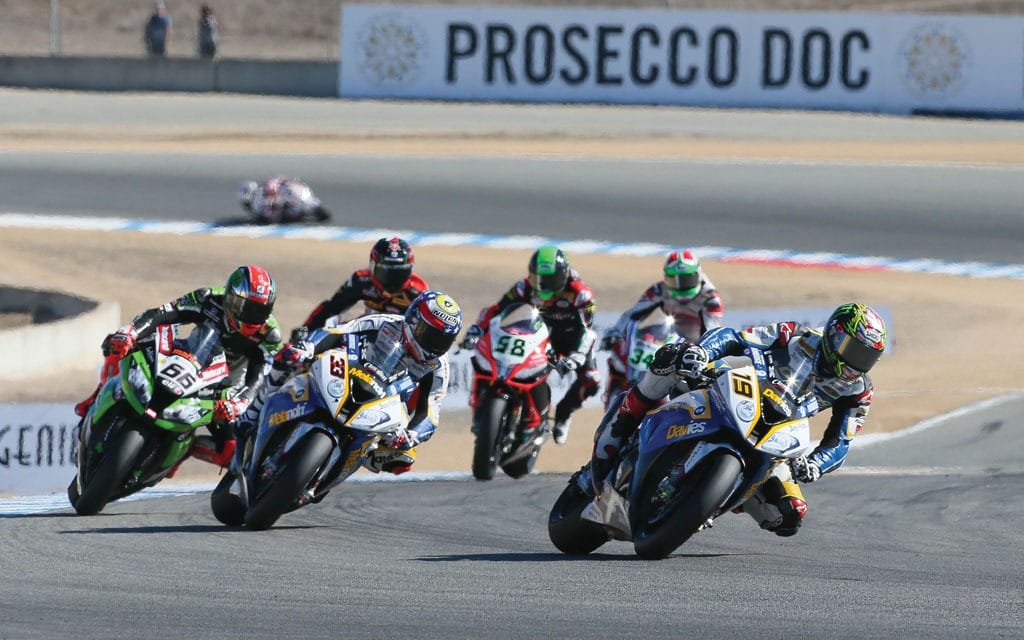 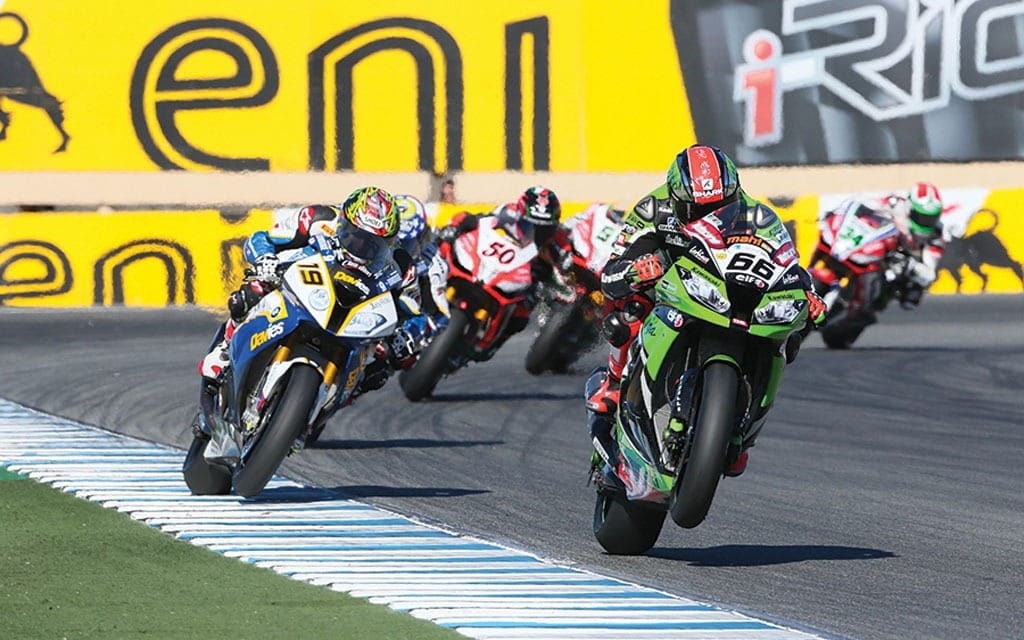 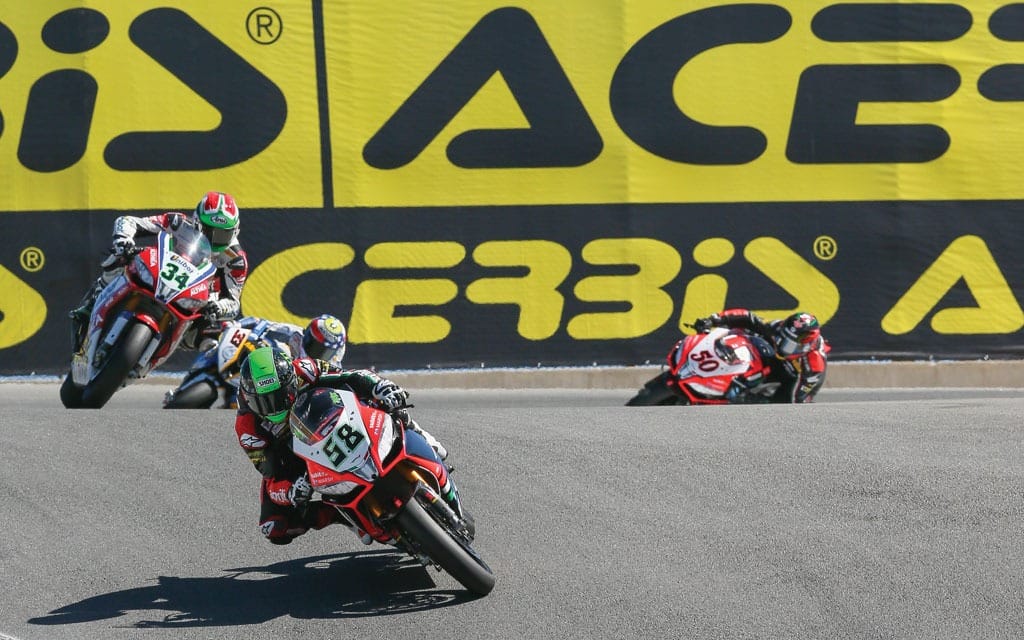 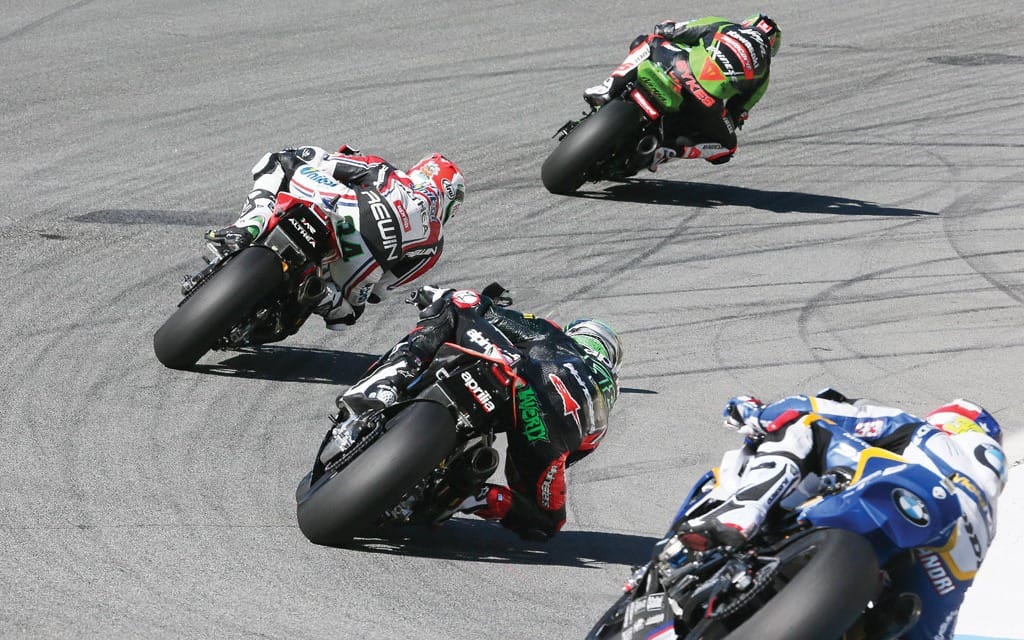 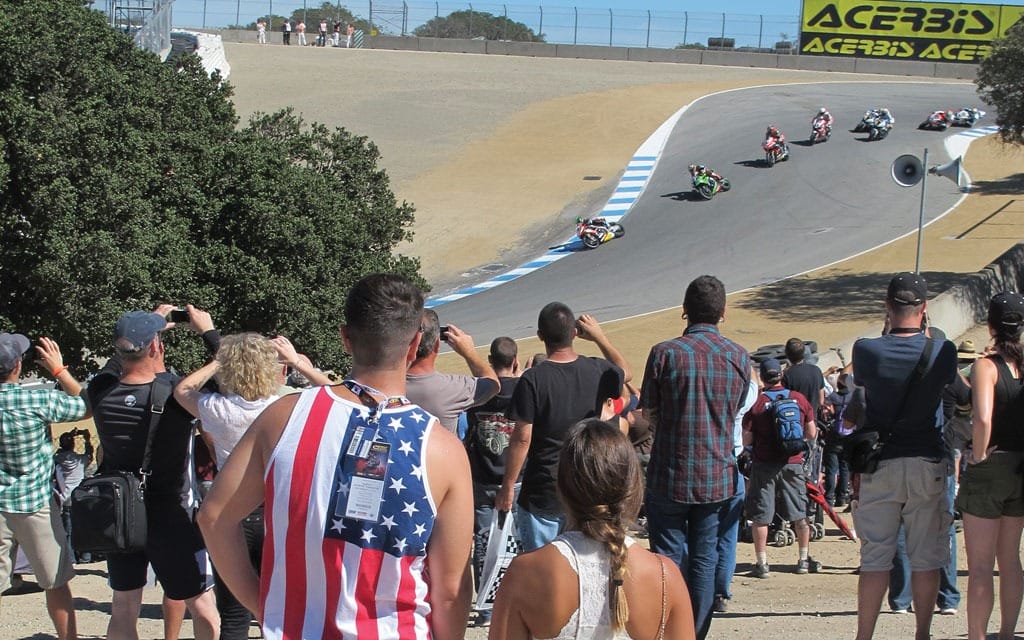 The turn of the screw at Laguna Seca
by James Nixon

I know the name and I’ve heard the numbers; the Corkscrew at Laguna Seca: a tight, hard-left, hard-right downhill chicane that drops 59 feet between its entrance and exit. For me, this corner has always been associated with Valentino Rossi’s off-track excursion to pass Casey Stoner in 2008 – I remember watching on TV and jumping up off the couch. Marc Marquez must have been watching too, because this past July, in a moment of poetic justice almost beyond belief, he put the same move on Rossi.

But to stand in the shade at the Corkscrew’s base is an experience verging on the surreal, the top of the steel fence digging into my palms a reminder that I’m actually here. The Superbike World Championship hasn’t made a stop at Laguna for 10 years, but now it’s back and I can hear the pack approaching down Rahal Straight. I watch as they crest the hill one after the other, bikes transitioning from left to right as they drop the equivalent of five stories and file through the chicane in a long, sinuous line. Type “poetry in motion” into an Internet search engine and you’ll likely be prompted with “Did you mean the Corkscrew?”

Each round of the WSBK series features two races, with qualifying on Saturday and both races on Sunday. Laguna’s round is different, however, and the two races are split between Saturday and Sunday. It may seem like a minor detail, but this scheduling difference poses a real challenge for racers, mechanics, and engineers. There’s less time to learn the track for riders who are unfamiliar with it – which, since it’s been 10 years since WSBK has been here, is virtually all of them. There’s also significantly less time to get bikes race prepped after Saturday’s qualifying sessions; teams must accomplish in roughly two hours what they’d normally have overnight to do. On Friday evening Kawasaki hosts a press dinner with its star rider Tom Sykes. When asked what he thinks of the unusual race split he simply states, “It’s stupid.” And how does Sykes fuel himself up for a race weekend? In this case, it’s with buffalo mozzarella and tomatoes to start, followed by ribs and polenta with a side of pasta. Did you have any dessert, Tom? “No,” he says, and is greeted by raised eyebrows from Kawasaki team members. “All right,” he says, laughing. “I may have sampled some gelato.”

I watch Saturday’s Superpole qualifying sessions from the Corkscrew. Dedicated fans have made an early trek up the hill for a coveted spot at the chicane. They needn’t have gone to such effort; attendance is less than stellar and spots with a Corkscrew view – even shady ones – are easy to come by. Aside from the loudspeaker spouting provisional qualifying times, there’s an odd, expectant hush and a heightened sense of attention, the modest crowd buzzing mildly in response to passing riders and changes in pole position – and there are many changes in pole position. Ultimately, Aprilia rider Sylvain Guintoli takes the pole with a time of 1:22.683, setting a new Laguna WSBK lap record in the process.

With a two-hour break between qualifying and race one, I check out the other activities. There’s a parade lap and VIP rides of the track, but I’m not very important and don’t partake. I do participate in the pit walk, which turns out to be more like a pit herding as officials steadily shepherd us along pit lane using a line of caution tape. The pit walk provides an opportunity to see the bikes up close. Teams have their garages open with bikes on display, mechanics busy making adjustments or talking about making adjustments. A few riders are signing autographs, though the umbrella girls seem to be more popular with much of the crowd than are the riders themselves.

Although fans seem to have missed the memo about Saturday’s race, the vendors are out in full force. What I would refer to as a row of tents is known in corporate speak as “Yamaha Marketplace,” and it’s here that you’ll find wide varieties of merchandise of wildly divergent quality – from top of the line leathers, helmets, and boots to bins of t-shirts at clearance prices. One tent is full of autographed photos and memorabilia, prices ranging from a couple of hundred upwards to a thousand dollars. They have a set of Nicky Hayden’s used leathers and I imagine what it would be like to put them on. The first thing I think of is Chris Farley wearing David Spade’s jacket in the movie Tommy Boy – simply put, a fat guy in a little coat.

The OEMs have spared no expense on their tent displays. Well, all but Triumph, who have neglected to bring any motorcycles. There are the usual suspects: Yamaha, Suzuki, Kawasaki and BMW, as well as Moto Guzzi and Aprilia. Only Yamaha offers demo rides (mostly on Bolts and the new FZ-09), but, to be fair, late September isn’t exactly peak demo season and most manufacturers have already disbanded their demo fleets. Behind the BMW tent, stunt rider Chris “Teach” McNeil wows a small crowd on a pair of BMWs – an S1000RR and an F800GS. He performs wheelies, stoppies, burnouts, stands on the seat, sits on the tank and rides with no hands. I’m most impressed by what he can do with a GS that’s fully kitted out with hard luggage. He ends the show with the classic stoppie-and-kiss from a girl pulled from the crowd; it takes two attempts, as she loses her nerve on his first approach (can you blame her?).

Of all the food and drink stalls, one stands out as a prime example of politically incorrect Americana – the Frog Dog stand. As this is “the official hot dog of Mazda Raceway Laguna Seca,” I feel duty bound to have one. Instead of a bun, this jumbo hot dog is served in a hollowed out French baguette – I wonder if at Magny-Cours they offer Yank Franks? And how do you hollow out a baguette? With a baguette boring machine? The reality isn’t so elegant. They remove one end of the baguette and then repeatedly ram the bread down on an eight-inch metal post; it’s like a proctology exam gone horribly wrong. If baguettes could talk, the screams from the Frog Dog stand would be deafening.

But I’m not here for Frog Dogs and cheap t-shirts; I’m here to see the spectacle of speed that is WSBK. Though I don’t follow WSBK religiously, I do keep an eye on the standings and watch race highlights online. I recognize names and even a few faces – Davies, Sykes, Melandri, Laverty – but the chance to see these racers in person is thrilling. Not tween-meeting-Beiber thrilling, but thrilling nonetheless. I make my way back up towards the Corkscrew to watch race one, easily picking my way through the sparse crowd on the hill. Some fans are obviously race spectating veterans, with supplies more suited to a week in the wilderness than a weekend in the infield. Umbrellas, chairs, blankets and coolers dot the hillside. I walk past a group of young men sprawled on the grass, beers in hand and the green, white and orange flag of the Republic of Ireland billowing in the breeze. I ask if they’re here to see Laverty. “Sure, what gave us away?” one of them responds in a lilting Irish brogue.

Race one looks to be Guintoli’s for the taking – he jumps out to an early lead and is gapping the field with every lap – but crashes and red flags cause lengthy delays and necessitate two restarts. Though you never want to see anyone get hurt, red flags do provide a little added excitement by bunching up the field. The most thrilling part of a race is the start – there are so many variables, so many possible outcomes going into that first corner – and the fans who show up for Saturday’s race get their money’s worth with three of them. After the final 12-lap sprint, Tom Sykes wins on his Kawasaki ZX-10R, followed by Chaz Davies on a BMW S1000RR. Eugene Laverty and his Aprilia RSV4 round out the top three.

Sunday’s attendance is much better, though there are still far fewer people than I would have expected. There’s more foot traffic around OEM tents and through vendor village, but those hoping for event-branded merchandise have left it too late; the official merchandise ran out midday Saturday. There are three ways to approach this fact: the Good, the Bad, and the Sad. The Good is that, despite Saturday’s dismal attendance, there were plenty of passionate fans. The Bad, at least for the track, is that selling out so quickly means a lot of money left on the table. And the Sad thing is that, although attendance is low, organizers were expecting it to be even lower.

I’m told that when MotoGP was here in July people camped out at the Corkscrew for hours to ensure they got a good spot. I show up a few minutes before race start and I’m still able to get right to the fence. No red flags this time, just 26 laps of uninterrupted action. Though Sykes leads for most of the race, he fades over the final two laps and drops from first to fourth. Eugene Laverty wins on his Aprilia. Davide Giugiliano, also riding an Aprilia, is second, while Marco Melandri finishes third on his BMW S1000RR.

Though attendance at North American motorcycle road racing events has been trending steadily downwards since the economic bubble burst, shouldn’t the return of WSBK to Laguna Seca after a 10-year hiatus draw a bigger crowd? “I honestly think people just don’t know about it,” says Colin Fraser, Canadian road racing guru and Canadian Superbike series race director. Walking around nearby Monterey it’s easy to get that impression; there are no signs or posters advertising the event. Lackluster promotion, coupled with bad timing (it’s late in the year and MotoGP has already come and gone) could explain the sparse turnout of an estimated 25,000. But no matter how many fans are watching, be it 50 or 50,000, seeing talented racers tackle the Corkscrew will always be the same – hard-left, hard-right in one falling, flowing line.