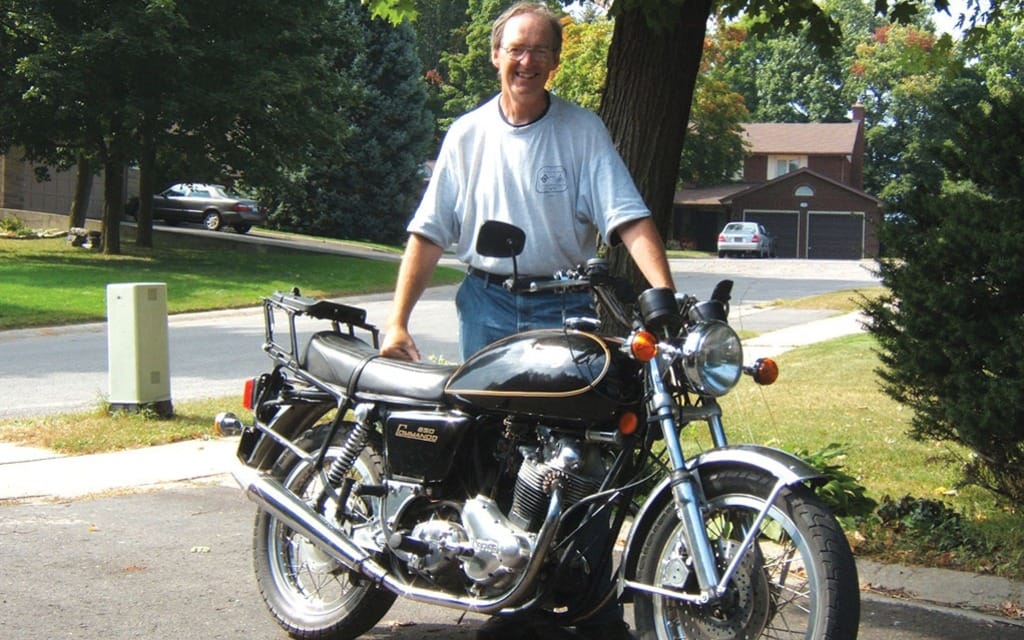 In early 1960s Toronto, when I was leaving my childhood, I developed a fascination with motorcycles. My fixation was not shared by any of my high school classmates, and certainly not by my parents. At 16, I got a driver’s licence and with savings from part-time jobs, bought a 1962 Vespa 150 cc scooter. I joined the Nortown Motorcycle Club and helped run events the club organized in and around Toronto; trials, motocross, road races at the old Harewood Acres, and a club display at the annual Toronto “Speedsport” show. But when I was accepted at university, I suppressed my motorcycle urges and focused on graduating.
Six years later, I was working as an electrical engineer in a pulp mill in the small northwestern Ontario town of Terrace Bay, and had married my girlfriend of several years. We had no children, but we had a few dollars, and I convinced her that we should buy a motorcycle. Firth Motorcycles in Toronto sold me a 1973 Norton Commando 850 Interstate — my first new motor vehicle. I flew to Toronto, picked it up on a Tuesday, rode it around the city for several days, then on Saturday bravely headed up Highway 400 to return the 800 miles to home.

In the spring of 1975, our son was born and we moved to Kingston, Ontario. My new job required much more travel than I anticipated, and three didn’t fit on the bike when I was home, so I sold the Commando. I had planned to keep it many years, and it broke my heart. I lost all track of it, and my second motorcycle drought lasted a little longer than my first one. Our daughter arrived the next spring, which took me farther from a lifestyle involving motorcycles.
Fast forward to 2008. I was back working at the same Kingston location where I started in 1975. In a hallway one day, another employee passed me wearing a Norton t-shirt, and I mentioned to him that I had owned a Commando. He confirmed that he had one, so I invited him to my office to see a photograph of the one I had owned. He said it looked like his, and I told him that I had memorized the serial number and I was able to repeat it to him (only six digits — before V.I.N. numbers). His eyes went wide, he sat down in my office chair, and said, “That’s my motorcycle!”

Indeed it was. He told me that he had found all the previous six owners of the bike before him except the original owner. After trying to find me for several years, even by writing to the Norton Owners Club in England, he had pretty much given up. A few days later he showed me the wiring diagram I had drawn for it 35 years before, passed from owner to owner. I gave him the cancelled cheque I wrote to buy it in 1973.

Of course, I wanted to see the bike, and he brought it over to my house in the fall of 2008. When I sat on it, a flood of memories returned to me. I told him I had kept my M-class licence all those years. Then he asked if I wanted to ride it again, and handed me the key.When it started on my first kick, he laughed and said, “Yes, you must have owned it.” (Then I stalled it, and flooded it trying to restart it, but give me a break). When he got it going again, I rode it around a few blocks nervously, then thanked him profusely, took a few pictures including the one attached, and watched sadly as “my” Norton disappeared again down the street.

The Norton was not restored. It was simply well-cared-for. The paint was still original, it had never been dropped, and the engine had not been rebuilt. A few things were renewed, like the seat and exhausts. It still is being ridden regularly.

Fast forward again, about 15 months. My first marriage failed in the mid-1990s, and my second wife was only mildly aware of my interest in motorcycles when, on a trip to Toronto, I diverted her into GP Bikes. I rode my new Triumph Bonneville T-100 back to Kingston on a sunny and unusually warm April 1, 2010. The significance of doing so on that particular day of the year was not lost on me. But I plan to keep it for many more years.