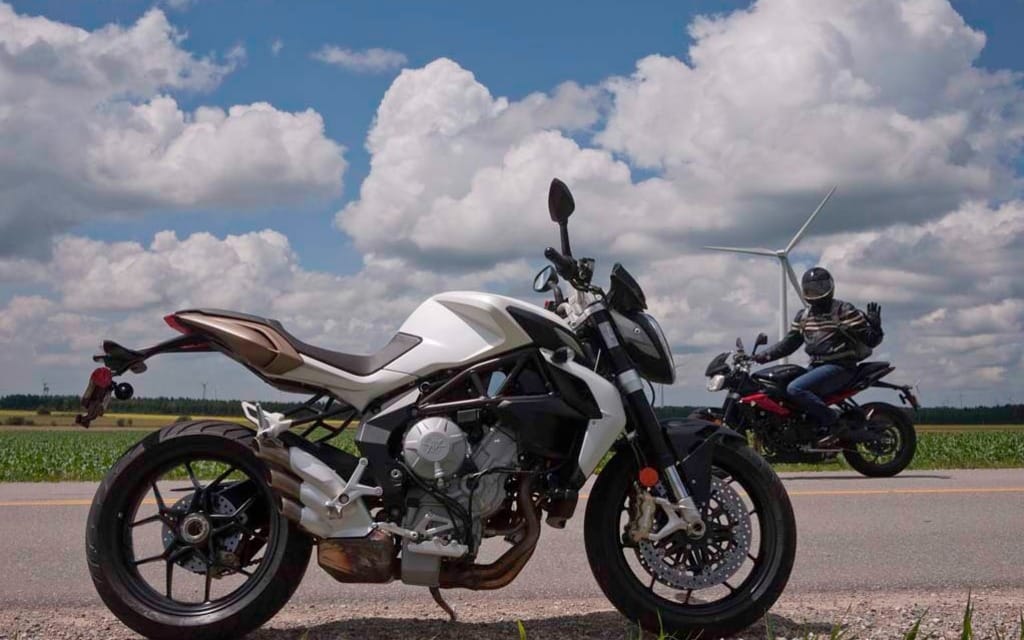 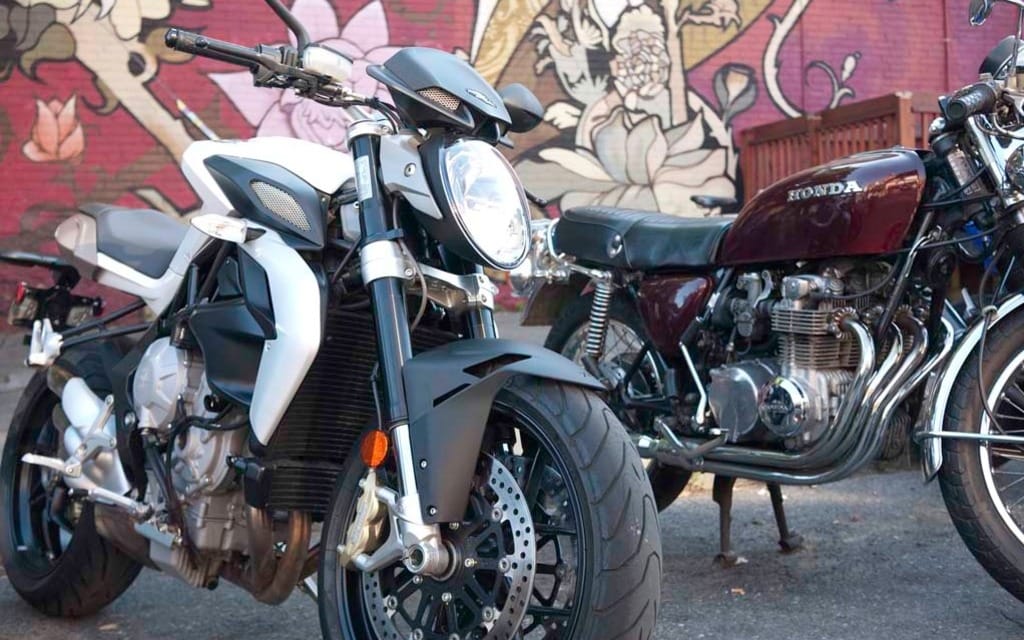 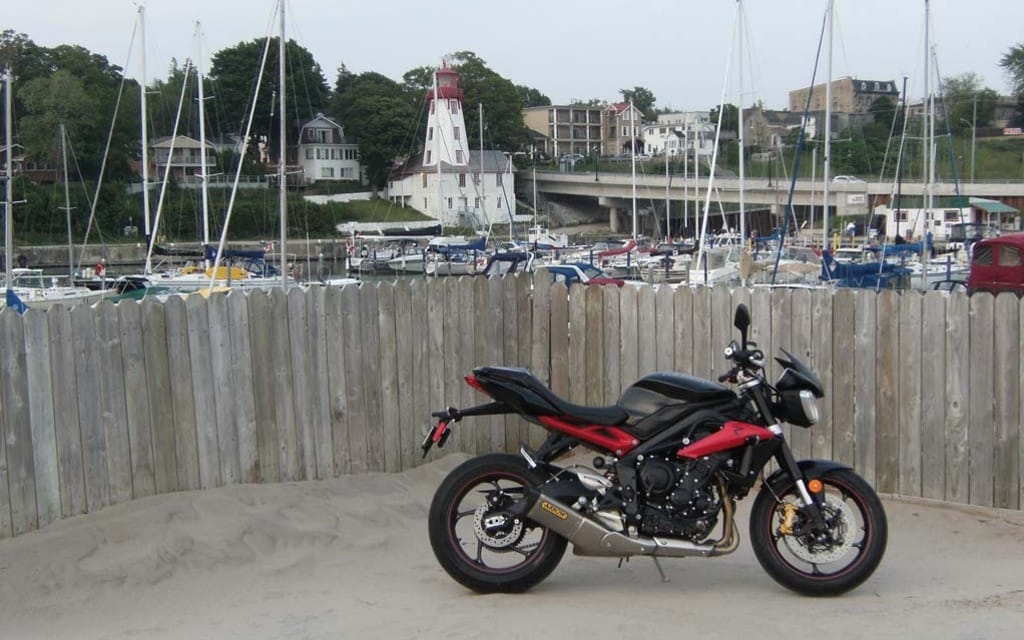 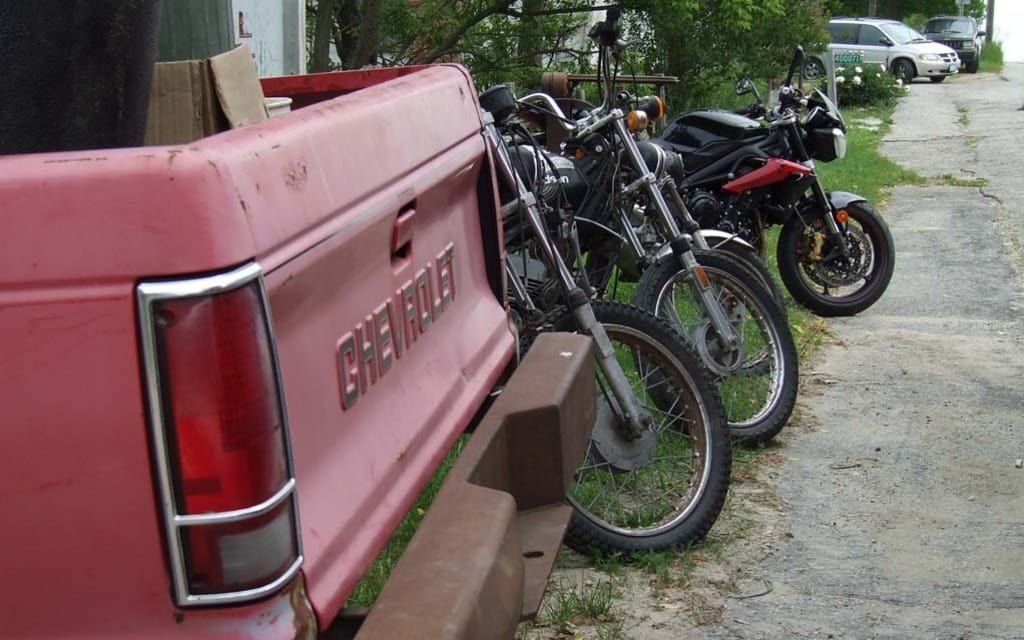 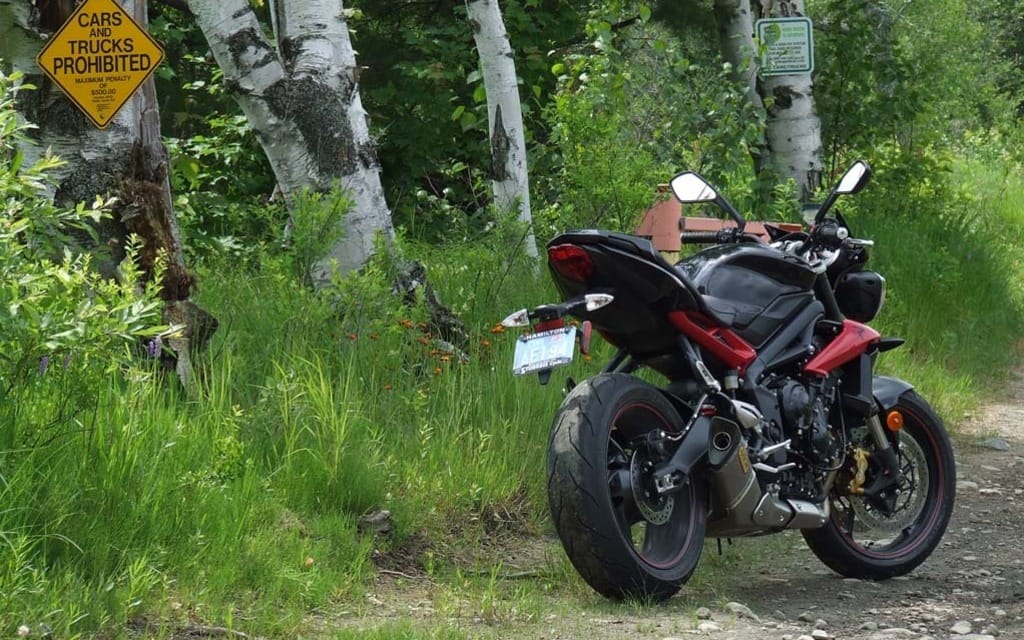 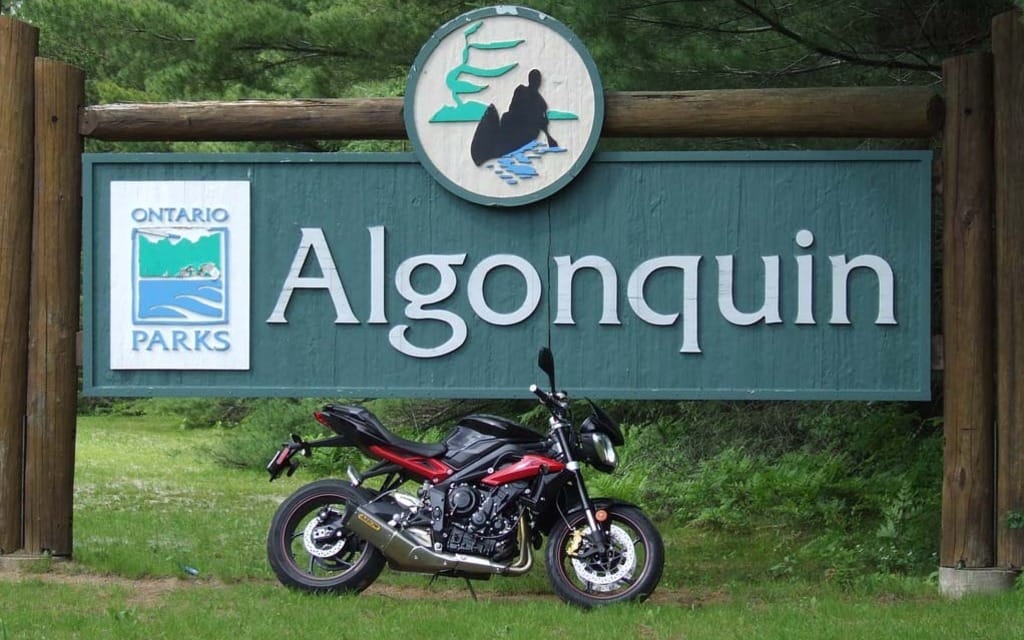 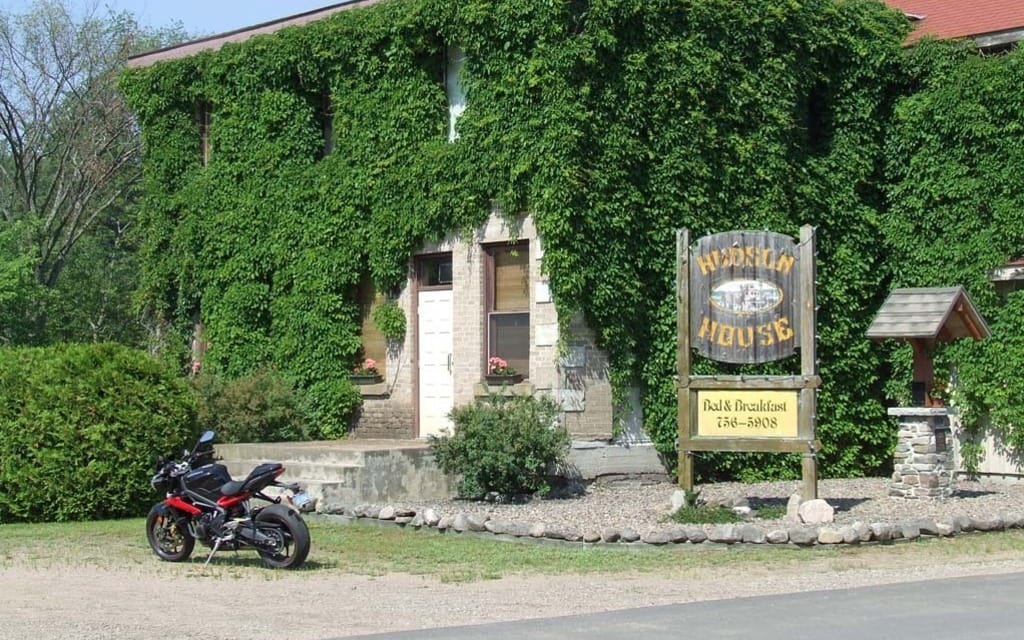 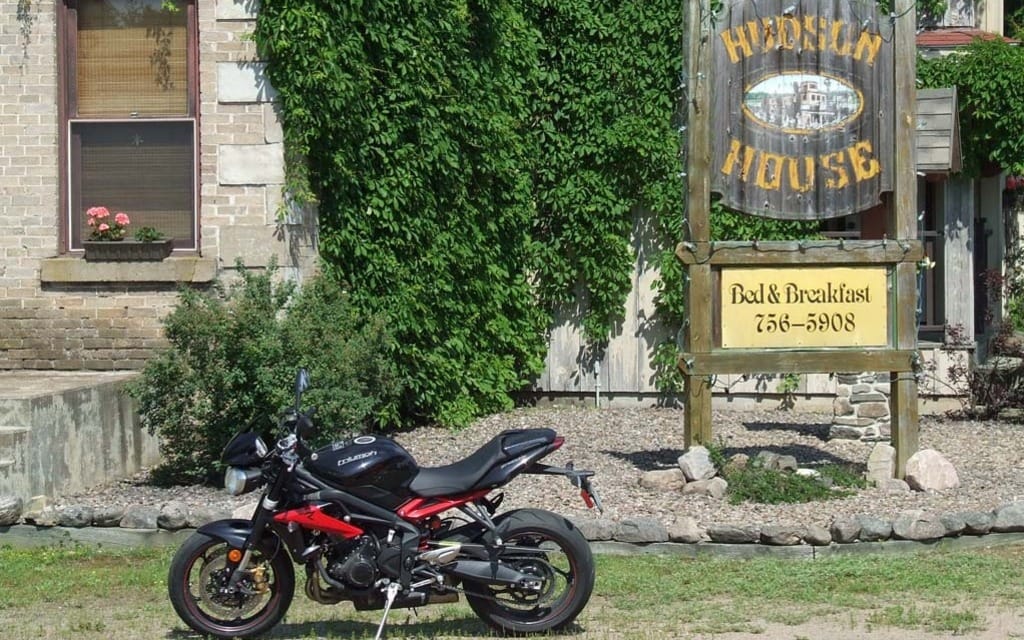 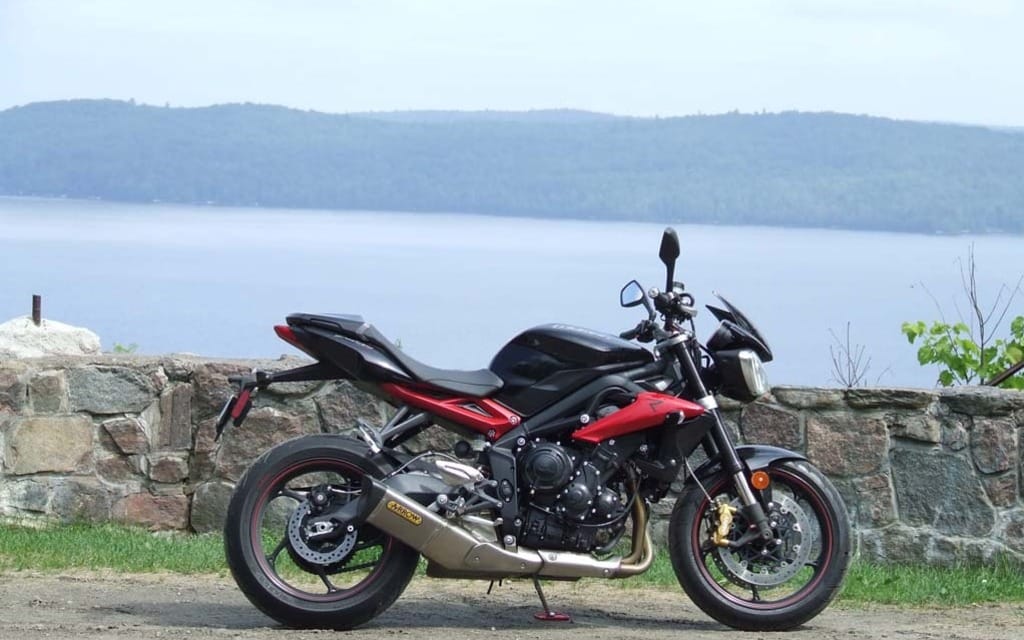 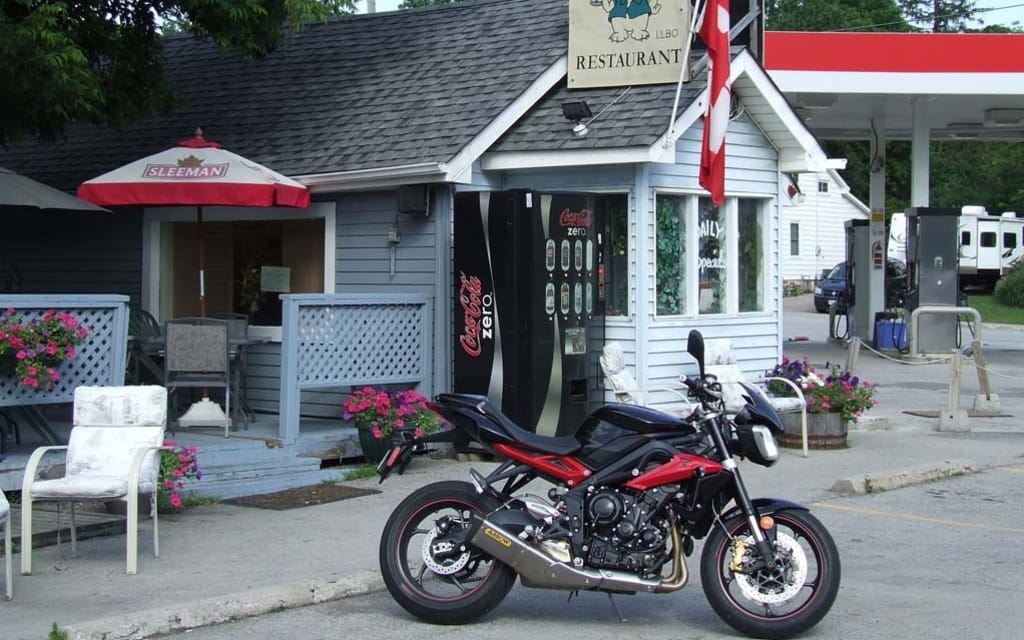 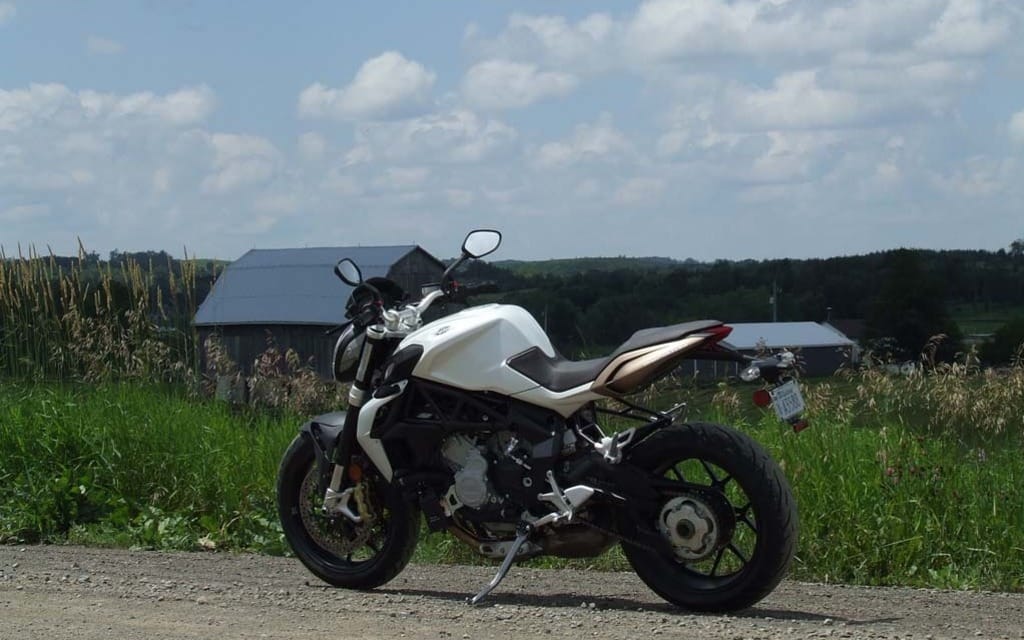 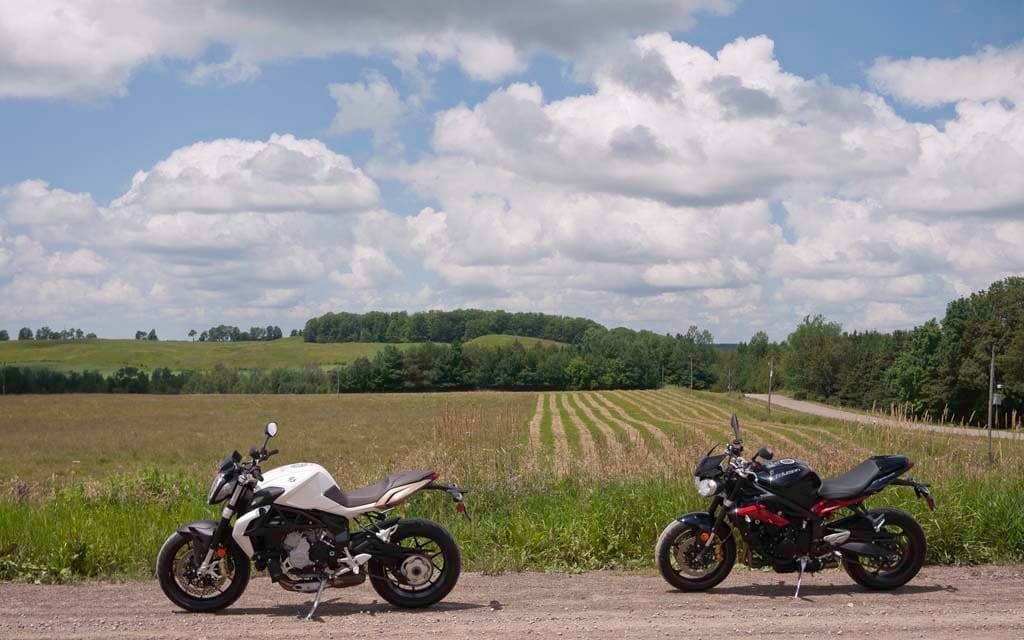 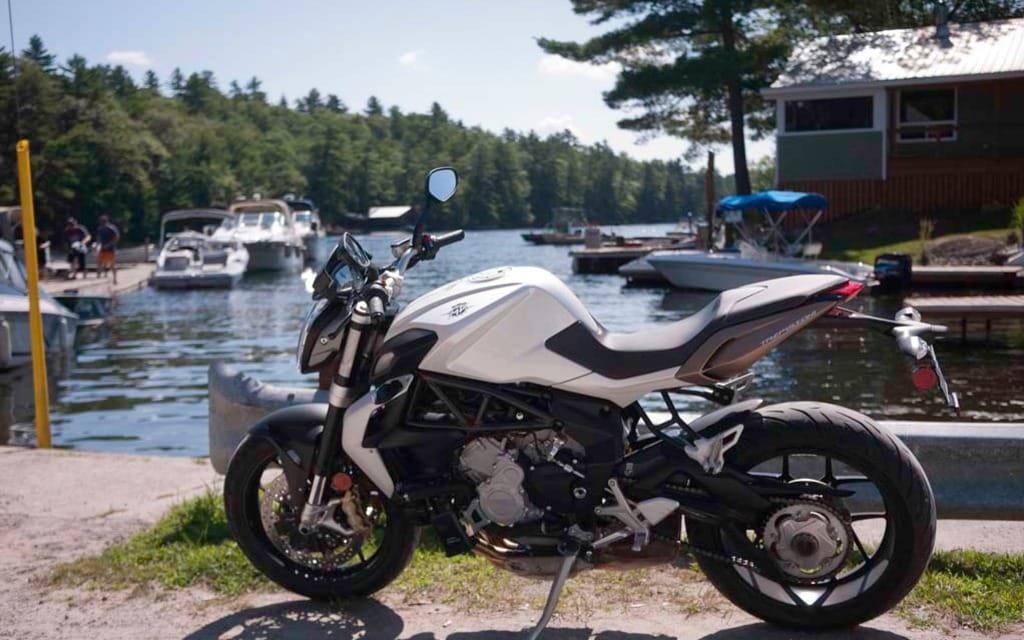 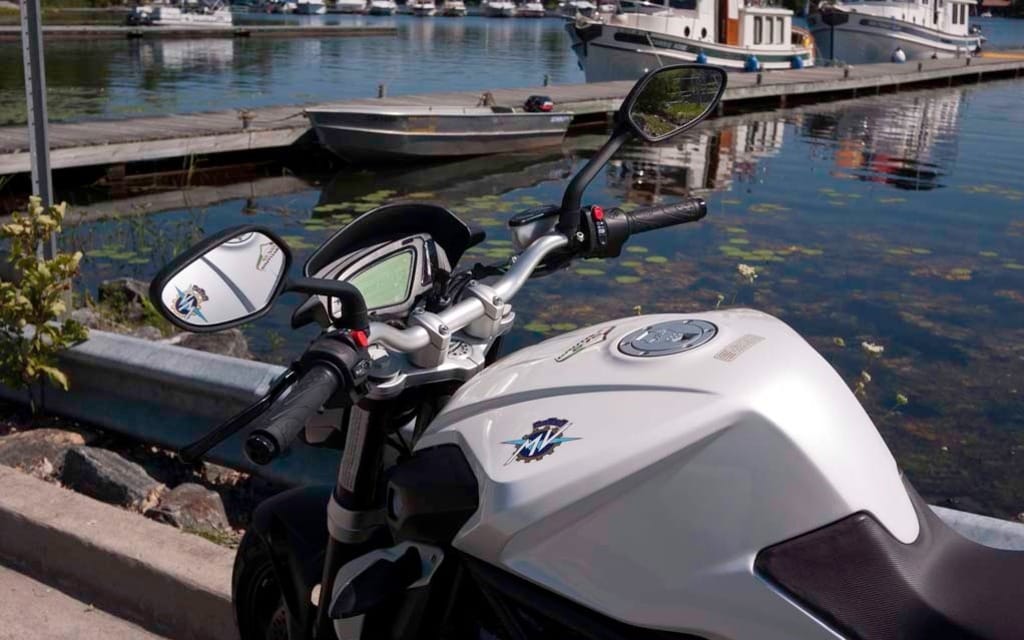 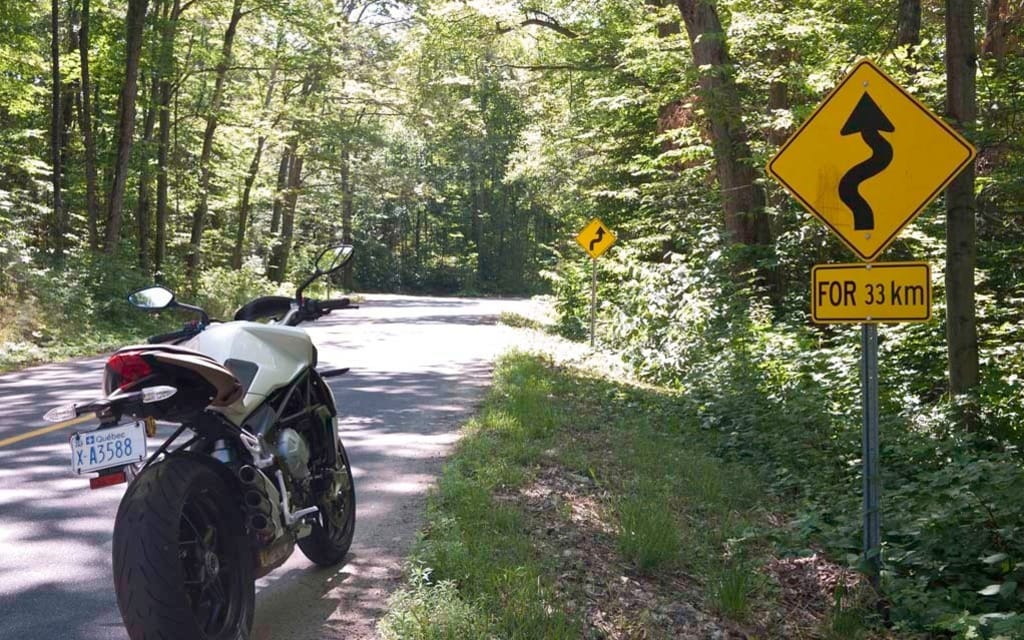 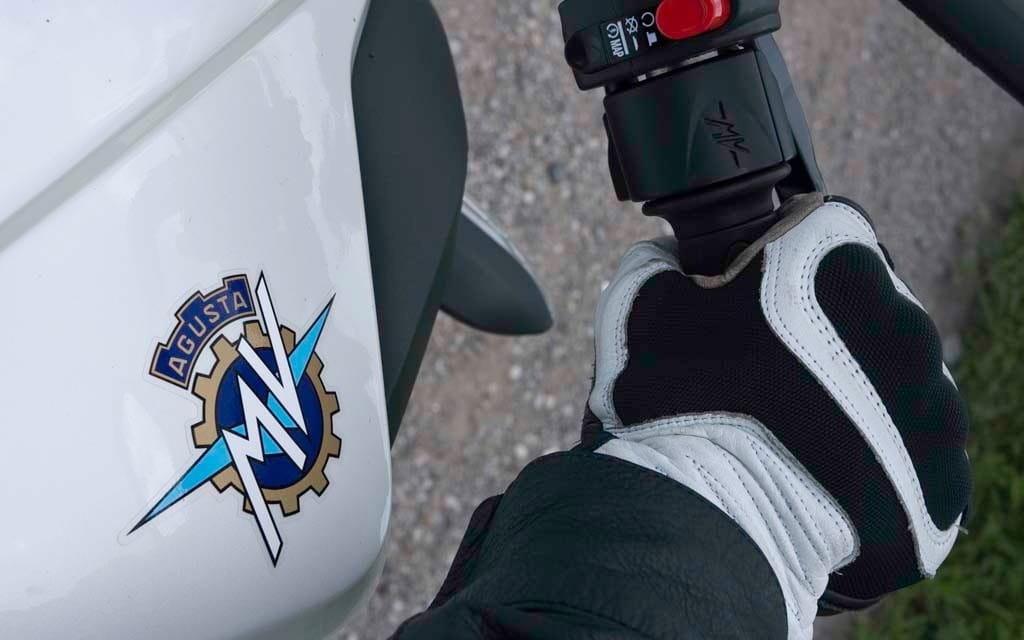 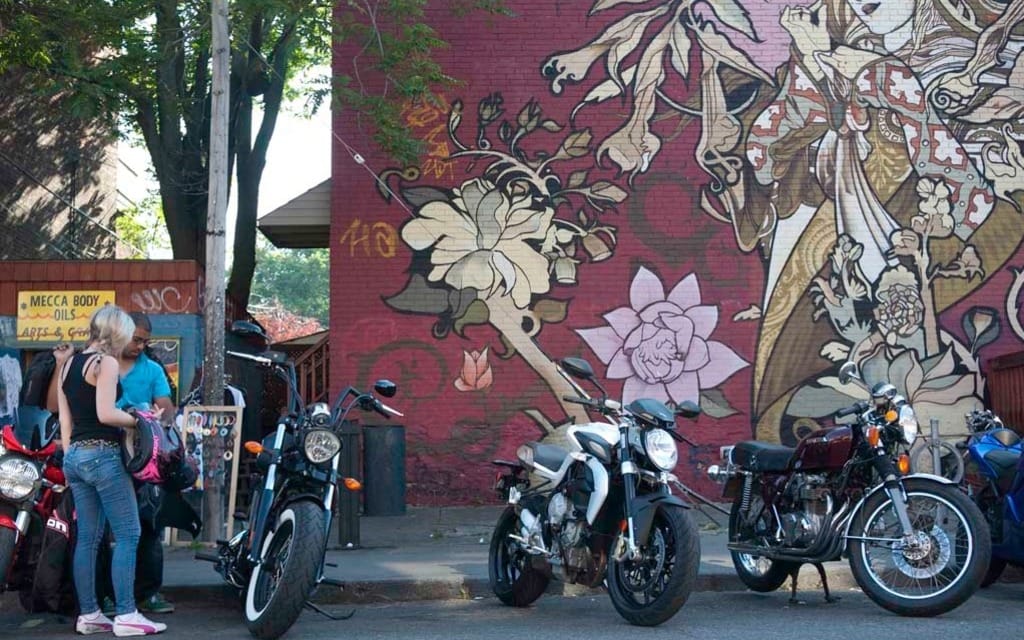 Beauty and the Brit

MV Agusta’s Brutale 675 vs Triumph’s Street Triple R
When Winston Churchill was told the Italians would side with the Germans in WWII he reportedly replied, “Seems only fair – since we had to have them in the last war.” In a battle of dry wit, it’s hard to beat a Brit.

In the spirit of old wartime animosity we pitted British and Italian motorcycles against each other in a middleweight match: in one corner the Triumph Street Triple R, in the other the MV Agusta Brutale 675. The result wasn’t exactly a knockout, but proof that you can’t get by on looks alone.

The first thing we noticed about the Brutale 675 is its beauty — it really is a striking design, somehow managing to be simultaneously angular and sleek. We’re particularly taken with the flared, wing-like protrusions on either side of the tank, giving the bike a wider feel from the saddle. Our test bike sports a gorgeous pearl white and matte metallic gold paint scheme, though the Brutale 675 is also available in two other finishes (matte magno grey and matte anthracite, and classic MV red and silver). The tail section is very wasp-like, and the combination indicator light and licence plate stem is integrated into the design, like an extended stinger — not attached as an afterthought.

If the Brutale 675 is an Italian supermodel, the Street Triple R is a sexy British nanny. The Triumph’s lines are sleek, flowing nicely from tank to tail. Our test bike was equipped with an optional sport cover on the passenger seat, enhancing the bike’s aggressive look. The Street Triple R features a red rear sub frame, side radiator cowls, and pinstriping on its rims. Where the MV succeeds in making the rear indicator/licence plate stem part of the whole, the Triumph comes up short; it seems stuck on, and instead of an aggressive stinger the look is like a benign butterfly’s extended proboscis. Our Street Triple R was the phantom black model, but the bike is also available in matte graphite and crystal white colour schemes.

In issues of the dash, the Triumph trumps the MV. The Street Triple R has an analogue tachometer with programmable LED shift light, alongside a digital display showing speed, gear, time of day, fuel gauge, engine temperature and choice of trip meters — the unit is manipulated using two buttons on the dash. The display is legible and simple to operate. The instrument nacelle on the stock model is out in the open, as though surgery were being performed to reveal the skull’s innards; it’s classic Street Triple styling, but some would say it’s less than attractive. Our test bike was fitted with an optional fly screen, which cleaned it up nicely.

Conversely, the Brutale 675 employs a fully digital display that is anything but easy-to-read, with a stylized — almost italic — look. The usual information is shown: rpm, speed, gear, shift light, odometer, trip meters, engine temperature — but no fuel gauge. The only information that’s easy to read is road speed. We noticed some problems with the gear indicator on our test bike, which didn’t always display the correct gear and would change without the lever being touched. The lack of buttons on the dash contributes to the clean look; the display is navigated using toggle buttons on the left grip. You can choose between four engine maps, or customize your own additional map. The Brutale 675 also features traction control, offering eight levels of intervention. The instrument nacelle of the MV is smaller and more tucked in than the Triumph’s. Thornton remarked that, from a side view, the instrumentation and headlight setup on the Brutale 675 “looks like a guy with no neck.” The effect is slightly brutish, which aptly fits this bike’s persona.

Speaking of headlights, neither the Street Triple R nor the Brutale 675 feature particularly attractive units. The twin lamps on the Triumph give it a bug-eyed, slightly surprised appearance, while staring down the MV is like being face-to-face with an enraged Cyclops.

The seating position is nearly identical for both bikes, placing the rider comfortably upright with a wide grip on the handlebar. The fit is a little tight through the legs, especially for taller riders, though not uncomfortably so. The upright seating position on these naked bikes allows a full blast of wind on the chest. This, coupled with handlebar positions, results in very little wrist strain, maintaining good comfort in this respect after a full day of riding.

Seat heights are fairly modest: 810 mm on the Brutale 675 and 820 mm on the Street Triple R. Our shortest tester could flat-foot while stationary on the MV and very nearly get his heels down on the Triumph. The seats on both bikes slide the rider forward. One tester likened it to having his scrotum pushed under his ass, which, he said, “is fun on a date, but not on a motorcycle.” The Triumph’s seat is slightly softer than the MV’s, but still feels hard after a long day. A day on the seat of the Brutale 675 feels like a day spent perched on a wooden plank, one that transmits a lot of engine heat to the rider. After heading south on highway 400, then sitting in Toronto traffic, both testers were uncomfortably warm on the MV.

The wide bar on both the Brutale 675 and the Street Triple R provide great steering leverage, and their light weights (the MV a claimed 167 kg dry, the Triumph a claimed 183 kg wet) further enhance manoeuvrability. Minute handling differences became apparent on the twisting roads around the forks of the Credit River, near Belfountain, Ontario. The Brutale 675 steers more quickly and lightly than the Street Triple R, and since rake and trail are nearly identical for both, a possible explanation for the difference could be wheelbase. A longer wheelbase typically increases stability and decreases responsiveness. The Street Triple R’s wheelbase is 30 mm longer than the Brutale 675’s (1,410 mm and 1,380 mm, respectively). Though the MV edges the Triumph slightly in steering, both bikes are stable.

In terms of performance, these bikes have an evenly matched starting point. Both the Street Triple R and the Brutale 675 feature in-line three-cylinder 675 cc engines. Power is delivered to rear wheels via chain final drives. The power curve is more gradual on the Street Triple R, with torque available immediately and continuing in a smooth arc, with a slight increase in power felt from 8,000 rpm to redline. The Brutale 675 feels decidedly tame at low rpm, but seems to switch on once revved up, really coming alive at 7,000 rpm, and pulling like hell from 9,000 rpm to redline. Midrange torque is exceptional for both bikes, but the vibration and sound of the MV make it feel stronger.

Of the two bikes, the Brutale 675 sounds better, featuring a wonderfully executed triple exhaust delivering a suitably brutal sound. The pipes exiting the cylinders are collected into a single, massive can under the bike, and then re-separated into three pipes that mimic the arc of the rear wheel. Although slightly tamer-sounding than the MV, the Triumph still has a nice growl — though how much of that growl could be attributed to our test bike’s optional Arrow exhaust is unknown as we didn’t hear it with the stock pipe.

Shifting on the Street Triple R is consistently smooth and reliable. We did notice one quirk: tapping down from neutral lacks a distinct snick into first; but it’s always a positive shift into gear — no getting stuck in neutral. With the Brutale 675 shifting is at times a bit dodgy; you can tap down from neutral but not get into first. This bike also comes with MV’s Electronically Assisted Shift system. EAS allows the rider to change gears extremely quickly, without engaging the clutch or even cutting the throttle, which adds to the Brutale 675’s ultra aggressive feel.

While making a loop through Dufferin and Simcoe counties we drew a lot of attention at small-town stoplights — not necessarily good. Clutch engagement on the Brutale 675 occurs later in the lever travel and comes on suddenly. Several times Nixon turned heads while revving up the MV before taking off — he says he was feathering the clutch; we say he craves attention. Actuation on the Street Triple R is smooth and predictable, with no feathering necessary.

Fuelling on both the Brutale 675 and Street Triple R is crisp and well sorted. While making photo passes northeast of Georgetown, it was easy to dial in and maintain precise speeds on both bikes. We did notice some lurching when going from open to closed throttle at speed, though nothing untoward — fuelling for both machines is above average.

Riding the not-so-smooth roads of southwestern Ontario provides ample opportunities to evaluate suspension, which on both bikes feels like what you’d find on a true sportbike. The Triumph comes with a 41 mm KYB fork adjustable for preload, compression and damping; it’s a little more compliant than the nonadjustable 43 mm Marzocchi fork on the MV. But both setups are very good, providing solid front-end feedback. The rear KYB shock on the Street Triple R is also three-way adjustable, while the Sachs unit on the Brutale 675 is stiffer and only adjustable for spring preload, giving it a slightly harsher ride quality. Suspension on the Triumph is noticeably plusher and not as jarring as the MV’s on frost-heaved pavement.

Reining in these bikes while maintaining control requires serious stopping power, and the brakes on both the Street Triple R and Brutale 675 are entirely adequate. Both bikes use four-piston, radially mounted calipers up front – Nissin on the Triumph, Brembo on the MV. The Brutale 675’s front brakes are stronger and more immediate than the Street Triple R’s, providing a more direct connection between braking fingers and wheel speed. In a professor-like moment Thornton made a good point: Brembo is to brakes what Öhlins is to shocks — nearly always better. Rear brakes for both bikes are Brembo, a single piston caliper on the Triumph and a double piston caliper on the MV. The Street Triple R features switchable ABS that’s solid and predictable under heavy braking. No ABS is fitted to the Brutale 675, which Nixon remembered the hard way by locking up the rear wheel for a skid on a gravel shoulder.

The MV’s single-sided swingarm and short, arcing exhaust provide a beautifully unobstructed view of the rear wheel. The Triumph’s exhaust is low-slung, but the split swingarm partially obstructs the view. Both bikes have 17-inch rims, and tire dimensions are identical: 120/70 front and 180/55 rear.

For bikes with such similar specifications the main difference is attitude. The Brutale 675 is unapologetically aggressive. The Street Triple R makes some concessions to smoothness and comfort, though in terms of handling and speed these concessions are negligible. The MV has an in-your-face attitude, like Rossi flipping off Biaggi in a corner, while the Triumph is raw yet refined, like Prince Harry getting caught playing strip poker then calmly discussing the incident over a cup of Earl Grey. The MV feels faster; the Triumph is plusher. The Brutale 675’s seat and its finicky clutch are its main shortcomings. Both bikes are available, now, and at $11,199 the Street Triple R is the bargain compared to the $11,995 Brutale 675. That means that if you buy the Triumph you save $800 and get a smoother, more comfortable ride, while really only sacrificing some attitude and looks. Sure, you could spend a week with an Italian supermodel, but would it really work in the long run? Go with the sexy Brit — no, we don’t mean Churchill — and you’ll be happy for the rest of your life.