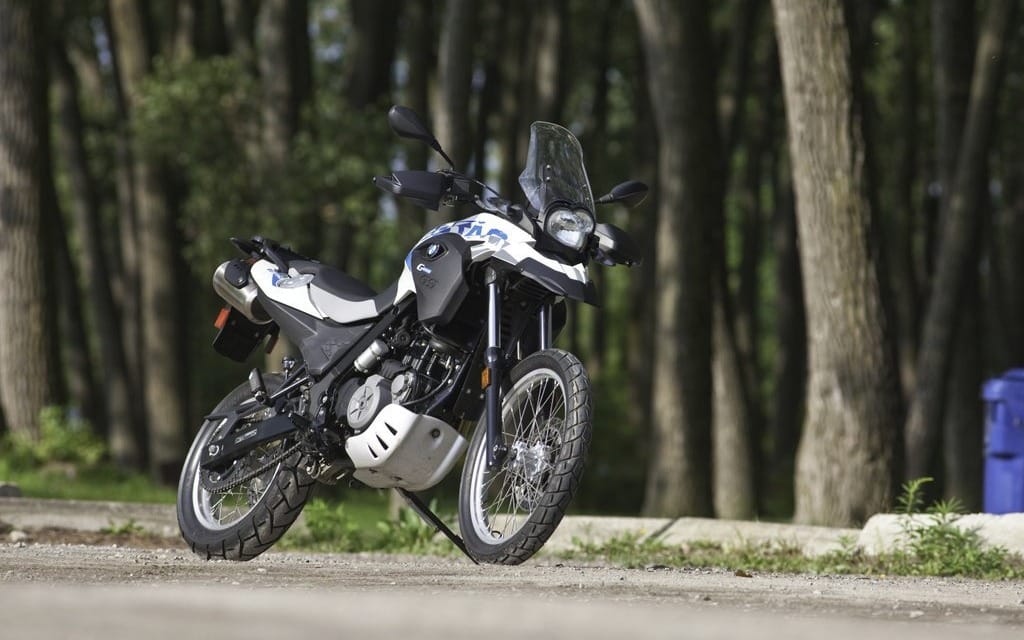 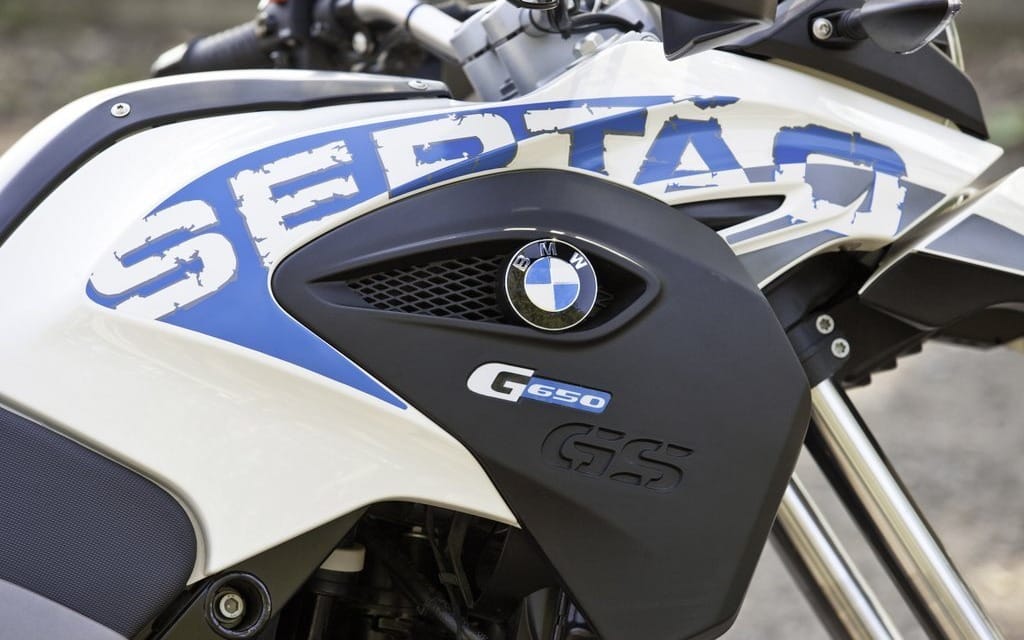 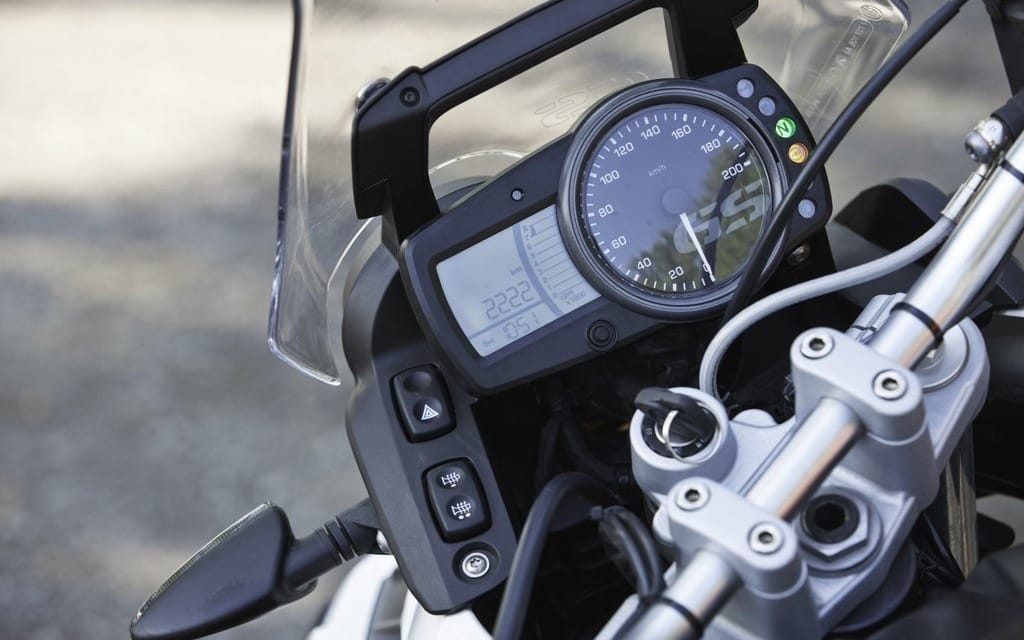 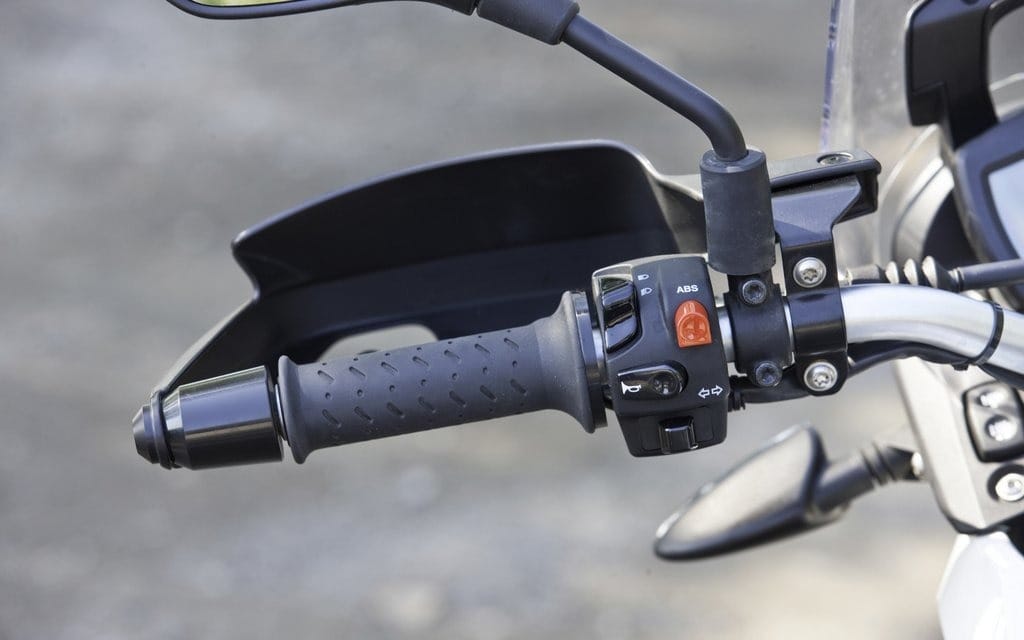 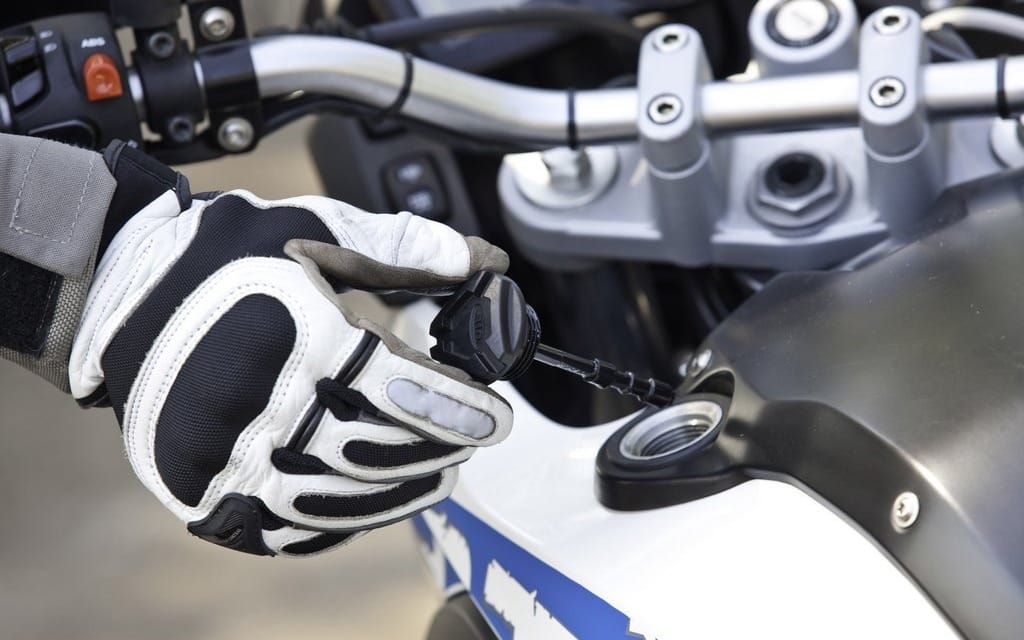 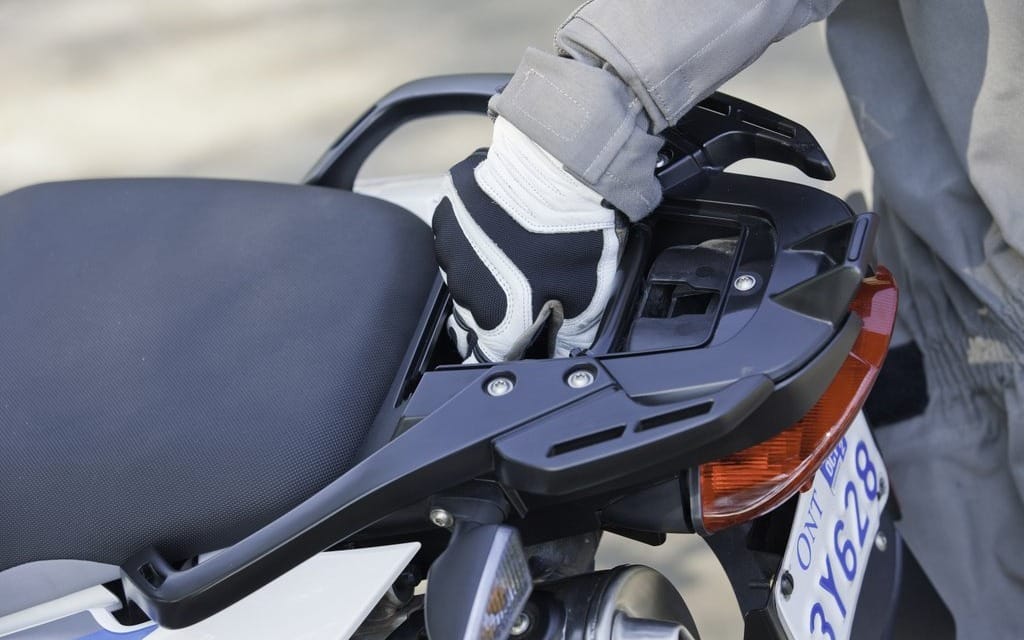 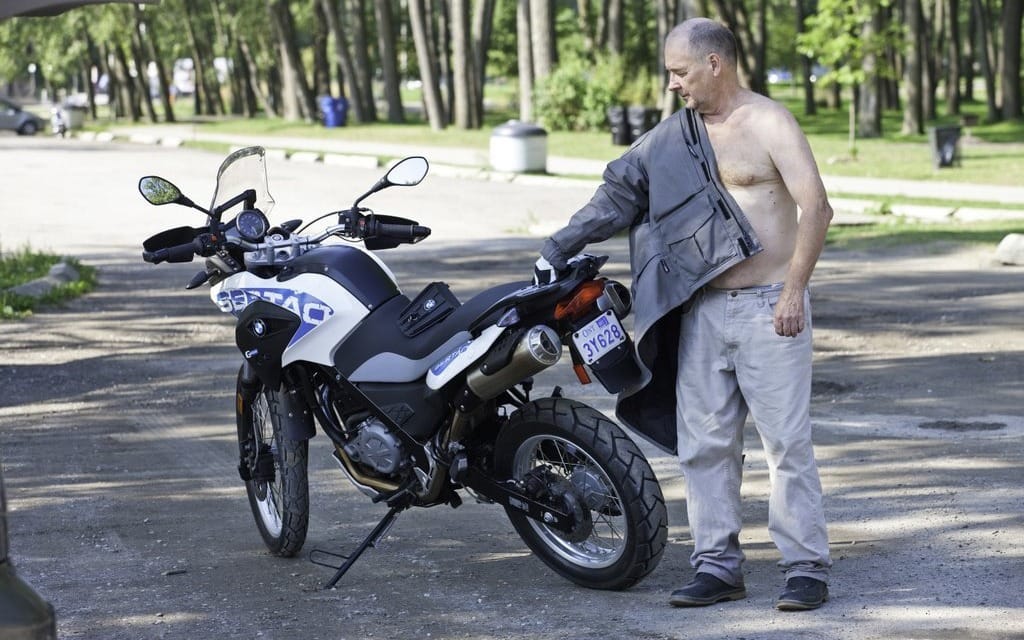 BMW single: ready to make friends with the dirt, comfy on the road
The weather forecast on local TV was “whole lotta rain,” and as I saddled up at the BMW Motorrad HQ north of Toronto, the skies were as gloomy as a murder scene. The Sertão sat between pillars on the side of the new BMW complex, and manoeuvring it out of place and onto the road was only a slightly tricky affair, but the chore was made less comfortable by the GS650’s saddle height of 860 mm, which is almost 34 inches, and my lack of familiarity with the bike.

The standard 650GS, upon which the Sertão is based, wears its seat considerably lower, and in fact the high setting for that one is 40 mm, or about 1.5 inches, below the Sertão’s low setting. The Sertão’s high setting is 900 mm, about 35.5 inches, which is very high, though not the highest in BMW’s stable (the R1200GS Adventure soars to 910 mm in its alpine setting). The additional seat height is a result of an increase in wheel size over the standard 650GS from 19 inches to 21 and a rise in suspension travel from 170 mm to 210. The wheels are wire-spoked and narrower than on the standard 650GS, an indication that the Sertão is intended for more serious off-road conditions than the standard 650.

But my problem of the moment was simply getting the Sertão out of the BMW compound, and I felt a little haphazardly positioned as I worked it away from its parking place, aware that a foot dab might end up with me sprawling face first onto the pavement, as if thankful to be back down on solid ground. But the 652 cc single cylinder powerplant burbled confidently and the 193 kg (claimed wet weight) Sertão reacted with the kind of steady poise you’d expect from a tai chi practitioner as it travelled down the length of sidewalk leading to the roadway beside the Motorrad HQ.

From there it was a short ride to the Don Valley Parkway. There are other good reasons for living somewhere else than the city of Toronto, but the Don Valley’s frequently clogged and dangerously fast north-south highway is a good enough reason by itself. Everyone’s in a hurry, and it’s always your fault that they’re late. The sky opened up as I turned onto the DVP, showering me and those around me in a heavy rainfall. Traffic slowed, speeded up, slowed, stopped, and speeded up. Normally, that wouldn’t be a problem, but reaching the ground with a toe required my sliding sideways in the seat and extending my leg an unnatural distance, and with a wet-slick highway, shuddering traffic an arm’s length away, and my just-introduced status with the BMW, I worried.

I shouldn’t have. The Sertão was as easy to ride at ultra-low speeds as anything I had encountered, and by slipping the clutch and dragging the rear brake, I could almost keep it at a feet-up standstill. When I had to drop a boot and hold the bike in position, the light weight and slim design assisted me, and when I feathered the clutch to start moving again, it proceeded smoothly, as though the driver behind me wasn’t talking on his cell phone and honking his horn, but standing behind me, pushing. One pleasing effect of the additional seat height is a view that overlooks the interference of most other traffic, which softened the trauma of a DVP excursion. And 20 minutes later, I was off the Parkway and on a city street, which was flooded in low spots. The Sertão roostered through six inches of water without twitching. I was starting to like this bike, even though it was just a single cylinder 650.

That 21-inch front wheel tended to slow the steering somewhat, but increased the bike’s natural stability, and the Sertão was equipped with Brembo brakes that operated flawlessly, and ABS, which increased my confidence on shiny-wet, heavily trafficked roads. The wheels were shod in Metzeler Tourance rubber, which behaved very well in wet and dry conditions. I was unable to test the bike in true dirt conditions, but nothing about its behaviour suggested that it would not operate there capably.

The Sertão’s oil filler is located on the left side of what looks like a fuel tank enclosure. The oil tank is located high on the bike, which adds to a feeling of top-heaviness when you’re muscling the thing around a garage floor, but becomes unnoticeable when underway. The fuel tank filler is beside the seat. There’s a hatch in a luggage carrier behind the passenger seat that can be opened with a key and allows access to tools without removal of the seat—a nice feature.

A quick look at the Sertão might have you thinking that it’s a twin, and indeed it does have two spark plugs, but the dual silencers that reside just below the tail piece exit from a single cylinder whose bore and stroke dimensions are moderately oversquare (100 mm x 83 mm) and allow a useful engine speed of 7,000 rpm. The bike is, despite its bird-like profile, an attractive machine, its blue and white paint scheme easy on the eye, and even on the Don Valley Parkway I noticed drivers giving it second looks.

Some unexpected things I liked: the sidestand goes way out to the side, which leans the bike over considerably when it’s parked and increases stability; it’s also easy to catch the sidestand tang with your toe and retract it (if you’re six feet tall, you may have no idea how comforting this feature is). The engine and muffler system work well together, maintaining a soft exhaust note that is not too delicate, but won’t disturb neighbours or other users of a trail system. The clutch pull is light, easy on the hand. The suspension is plush, giving a comfortable ride in uneven terrain. The seat is decently padded and narrow enough that it does not splay the legs out when the bike’s not moving. And lastly, the design of the handlebar and windscreen provides a perfect receptacle for a helmet: with the front of the helmet facing the rider, a full-face Arai nestled into the hollow between bar and screen so cosily that it seemed unlikely to fall even if the bike were bumped hard.

It took some learning to get going on the Sertão, which was a bit slow to start but never failed to start. As with some other tall bikes, I had to rest my right thigh on the seat while my left foot was planted on the ground; in order to get moving, I would shove the bike into an upright position under me, so the seat slid sideways against my thigh. When it was nicely vertical, I would sort of hop into position, dabbing my right toe down to the ground, leaving my left foot dangling. With the light clutch action, torque-rich response at low revs, and precise throttle action, getting going at that point was easy. Of course, riders over six feet tall could skip this whole paragraph, but despite the Sertão’s saddle height, it should not be considered suitable only for taller riders. I am five-nine and have been known to express horror at the prospect of getting onto a ridiculously tall motorcycle like the Sertão. However, I wasn’t halfway down the rainy Don Valley Parkway before I began to feel very comfortable on the bike, and once I’d figured out the technique of yanking the bike upright under me while I was half-slid off it, my comfort level in parking lots rose similarly. I would guess that a rider even a little shorter than me could become comfortable on the Sertão fairly quickly—partly, because it’s light and narrow, which reduces the feel of height.

Underway, the BMW single is obviously a BMW single. The engine vibrates in a pleasing manner that no one should mistake for anything but a single, and the power response is notably familiar, rich low down, decent at higher revs, but never really crescendoing like it would on a multi-cylinder bike. Despite that, the bike is easily capable of earning speeding tickets, even on fast highways.

Some features aided comfort, including an effective windscreen and grip heaters; and some features aided rideability, including an off-switch for the ABS near the left handgrip. What I liked most about the Sertão was its balance: it is a tall, off-road capable motorcycle that is remarkably easy to ride, and it feels like a motorcycle that would continue to be fun to ride even for dirt-roaders with a great deal more experience than I have. If I had a Sertão, in fact, I might, given a little time away from the office, become one of those experienced dirt riders. I’d certainly be motivated to try.

The Sertão is available only in the Aura white and Arroyo blue paint, at a Canadian price of $10,250.