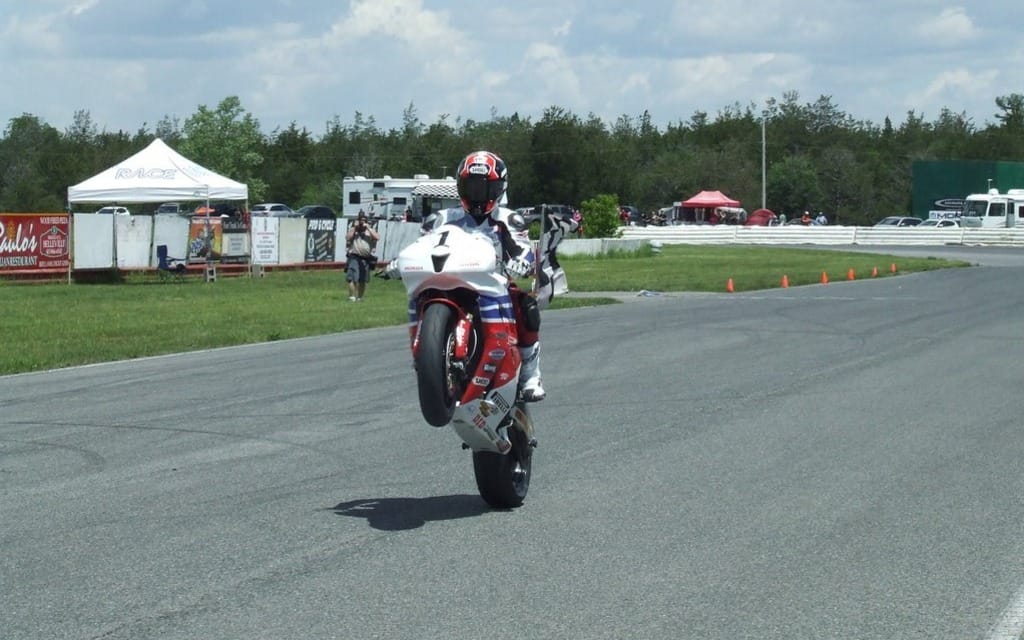 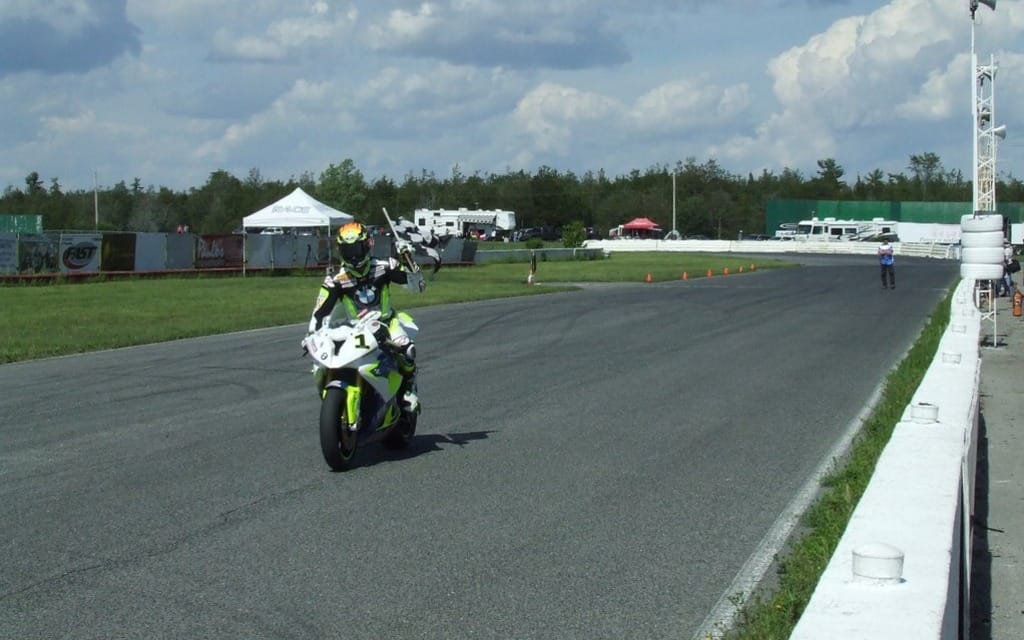 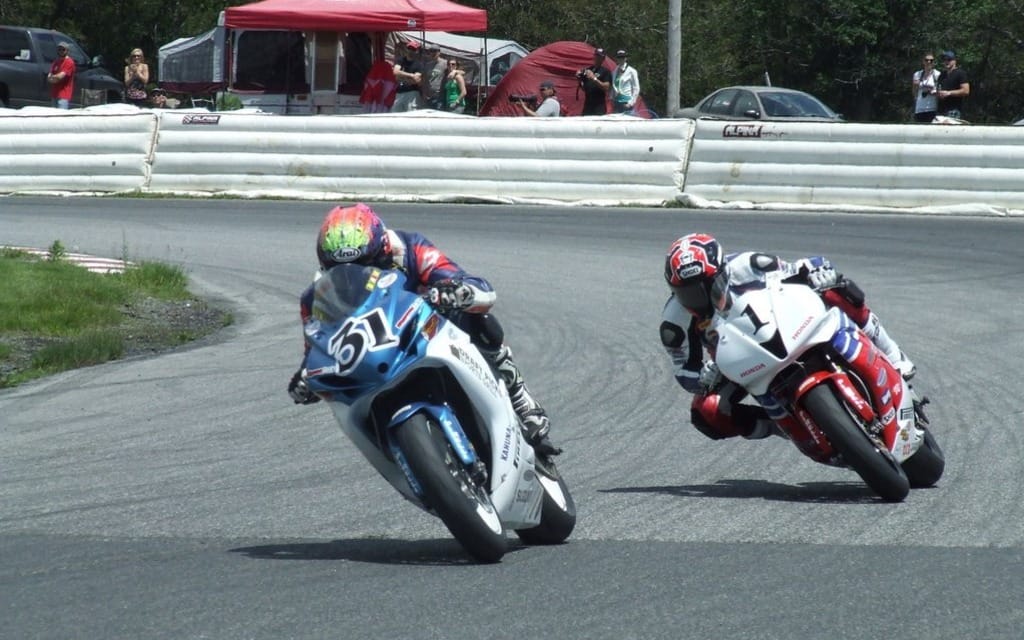 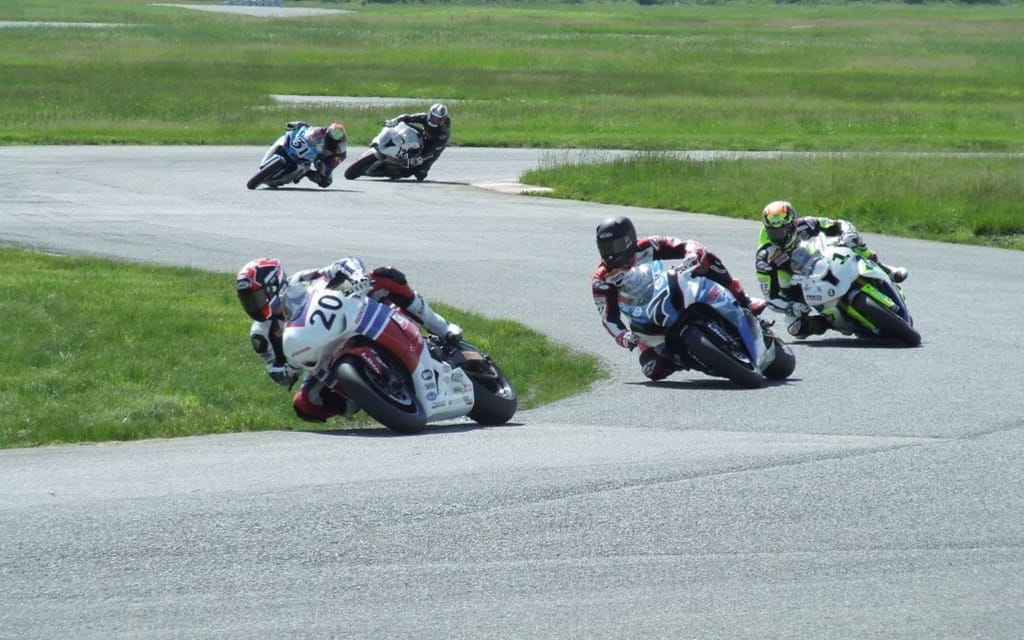 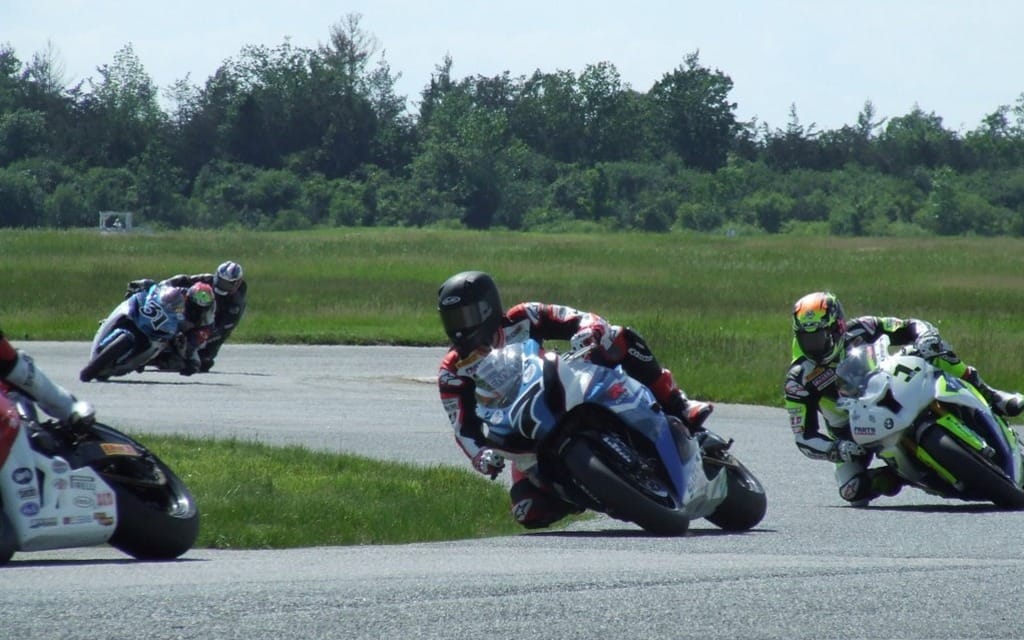 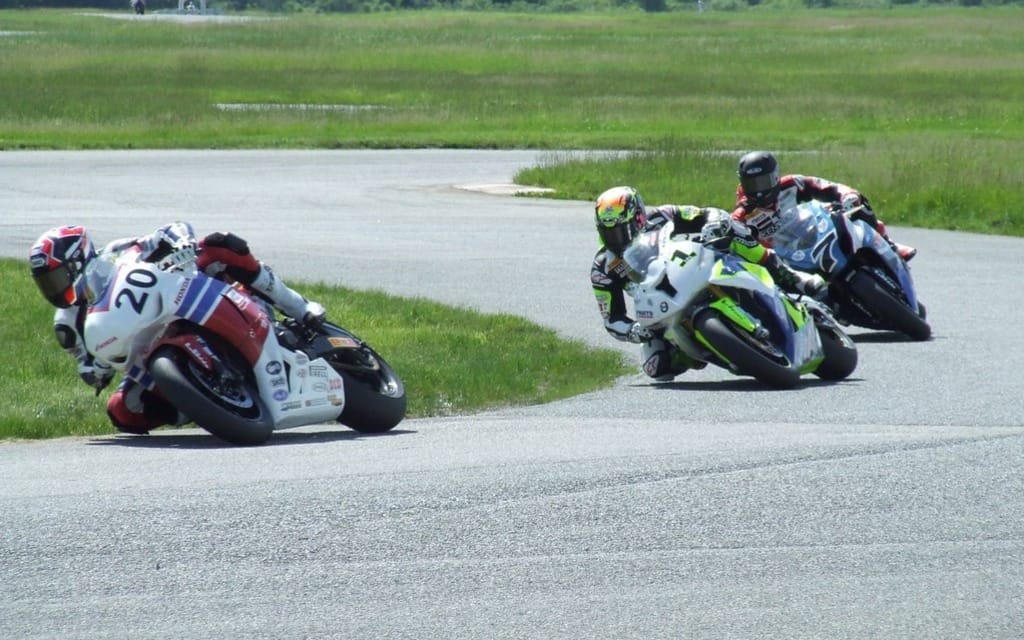 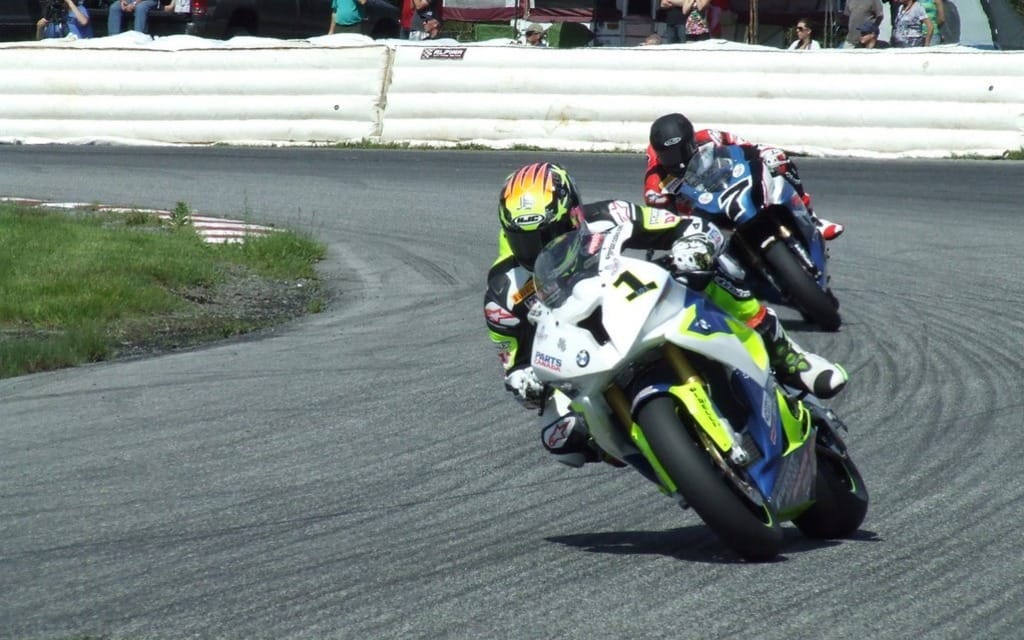 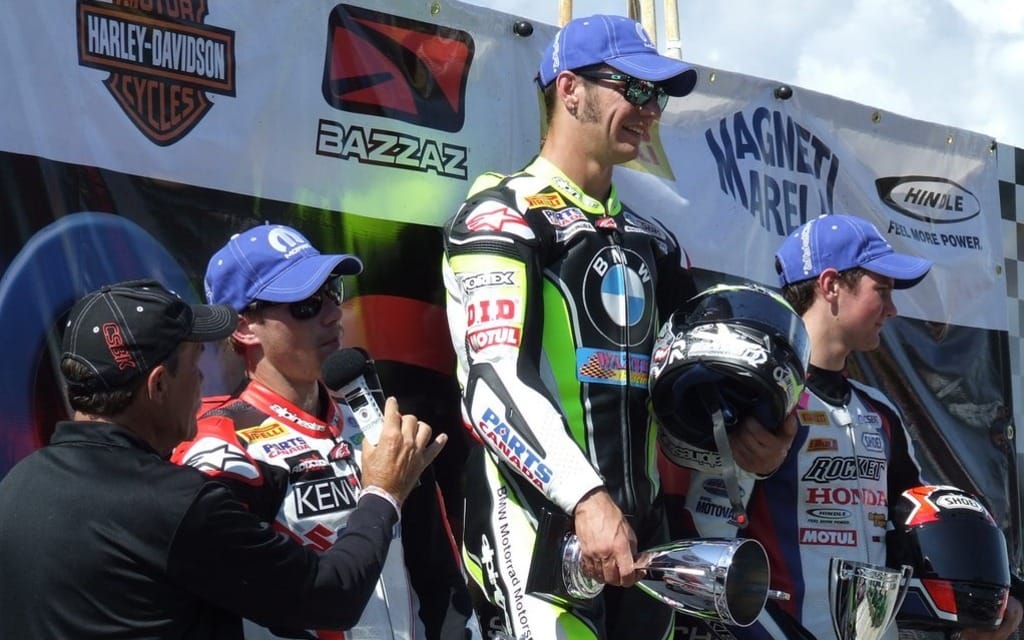 Shannonville Round Dominated By Usual Suspects
By: James Nixon

Perennial Superbike champion Jordan Szoke battled with Jodi Christie and Alex Welsh for top spot in the opening round of the 2013 Canadian Superbike Series at Shannonville Motorsports Park on the weekend.  Szoke, who is the current champion, is going for his ninth title in 2013, and he shows no sign of getting tired of it all. “I’ll take as many (championships) as I can get,” he told Cycle Canada. “Every year I feel better and better, more comfortable on the bike.”

Maybe, but Szoke and his BMW S1000RR face some tough competition. Race director Colin Fraser says Christie, backed by Honda Canada, and Welsh aboard a Suzuki GSX-R1000, could challenge Szoke for the No. 1 plate this year.

Saturday’s qualifying took place under rainy conditions, with Szoke taking the pole position by posting a time of 1.04.472 on the 2.45 km, 11-turn pro track layout. Christie, Welsh, and Matthew McBride weren’t far behind, all qualifying under 1.05. Conditions on Sunday were much different, with blue skies and a hot, dry track, and with limited  set-up time, riders and their teams scrambled to prepare.

The 18-lap Pro Sportbike race saw a terrific battle between Christie on a CBR600RR and old hand Frank Trombino on a Suzuki GSX-R600. The pair opened an early gap on the rest of the field and Trombino led for the first 13 laps. Christie, however, kept close, got a good draft and was able to pass Trombino on the back straight. Once in the lead, Christie opened a gap and negotiated backmarkers without incident, pulling away for his first win of the season. Trombino finished second, 4.798 seconds back, and John Ross MacRae (Triumph Daytona) rounded out the top three, crossing the line a distant 27.031 seconds after the winner. Christie looks to become only the third rider ever to win three straight Hindle Pro Sportbike championships, and is also competing in Pro Superbike this year.

The 22-lap Pro Superbike main event delivered the best action of the day. Though Szoke had the pole, Christie had a fantastic start with his CBR1000RR and jumped to an early lead, with Welsh, Trombino, and Szoke trailing into the first corner. Szoke passed Trombino during the opening lap, then the top three riders hung together and quickly opened a sizeable gap on the rest of the field. Szoke passed Welsh for second on the back straight in lap five and held tight to Christie’s rear wheel, looking for an opportunity to take the lead. Welsh seemed content to let the top two battle it out, staying close and perhaps saving the tires of his GSX-R1000 for later in the race.

On lap 10 Szoke made a daring inside pass on Christie through turn two to take the lead. Welsh made his move not long after, passing Christie for second. Welsh and Christie battled brilliantly for second place, with Christie passing Welsh on lap 19 and looking to make a move on Szoke for the lead. But Christie couldn’t gain enough ground to challenge Szoke and his BMW S1000RR, and in the end it was Szoke crossing the line first with a time of 24:00.649. Christie held off a late charge by Welsh to claim second, finishing 0.474 seconds behind Szoke. Welsh was third, 0.607 seconds off the lead, and later lamented his somewhat conservative strategy: “For a lot of the race I hung back. I should have taken charge of the situation. You can’t afford to lose points to Jordan like we did today.”

After his opening round victory in the CSBK series, the 41st win of his career, Szoke leads the Pro Superbike standings with 56 points. Christie sits in second place with 45 points and Welsh holds third with 39.

Racing these motorcycles is incredibly physically demanding; it comes as no surprise that the most successful racers are in top physical form. Jordan Szoke can’t seem to get enough two-wheeled competition, and incorporates mountain bike racing into his fitness regimen. “I’ve always ridden bikes as part of my training,” says Szoke, “but only recently started racing them.” Szoke competes in a mountain bike racing series at Kelso Conservation Area, where more than 200 riders took part in the last event. He won that race too.