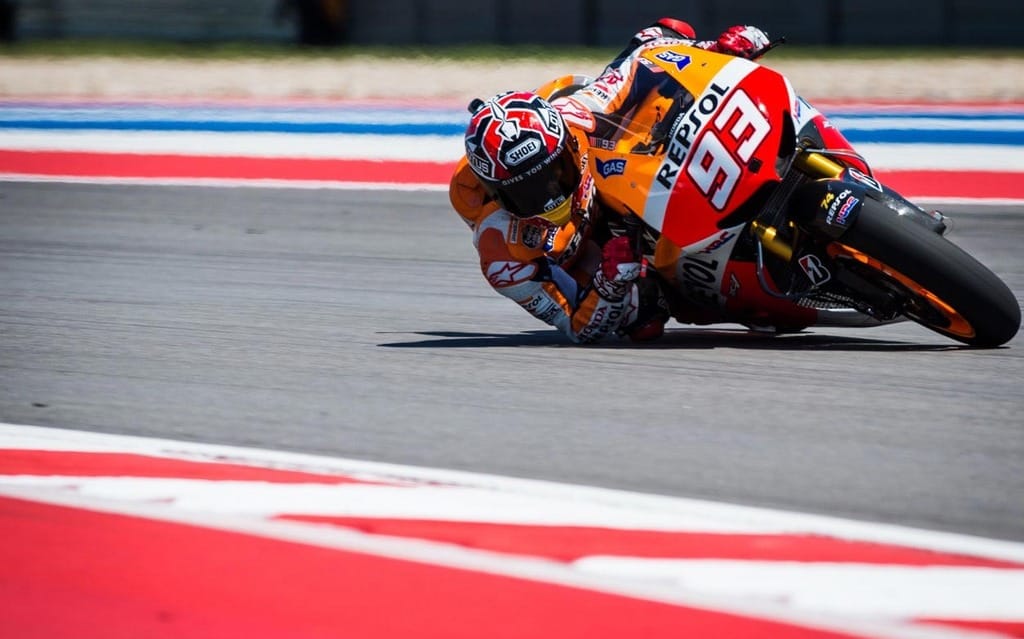 It was a day of firsts at Circuit of the Americas. Marc Marquez scored his first win in the premier class at the first MotoGP event at the Austin, Texas course. Valentino Rossi said “He is very fast and it will be very hard to beat him, for sure,” after Marquez became, at 20, the youngest MotoGP rider on the pole.

Dani Pedrosa took the lead as the red lights went out and held it until the 13th lap, when Marquez overtook him for the lead. Marquez finished a second and a half ahead of his teammate Pedrosa, putting the factory Honda team 1-2 on the podium.

Jorge Lorenzo notched his 100th career podium across the three classes of MotoGP, clinching third on the factory Yamaha.

Rossi qualified eighth and worked his way up to a sixth place finish. He was behind the Tech3 Yamaha of Cal Crutchlow and the LCR Honda of Stefan Bradl. Bradl ran as high as second on the initial lap, eventually slipping to fifth after being overtaken by Crutchlow on the 13th lap.

The Ducatis continued to struggle, notching finishes no better than last year. The factory Ducati riders Dovizioso and Hayden finished seventh and ninth respectively. Hayden referred to his effort as their “limit at the moment.”

Texan Ben Spies completed the race, but struggled with chest pains before and during the race. He came home in 13th place despite have spent the hours before the race in Clinica Mobile.

The MotoGP circus moves to Europe for the first time in the 2013 season for the next race at Jerez, Spain on May 5th.