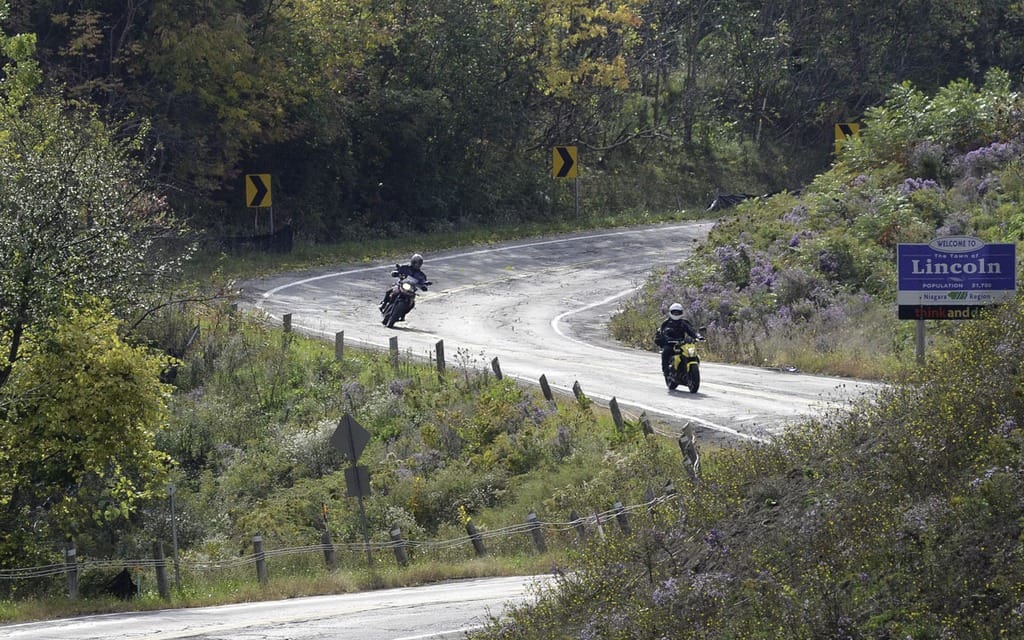 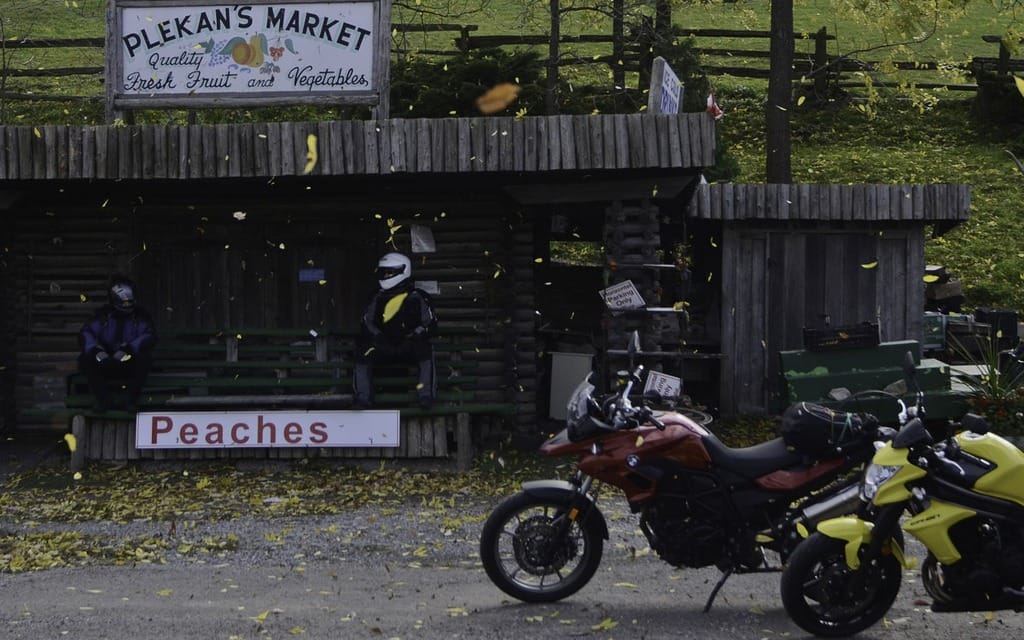 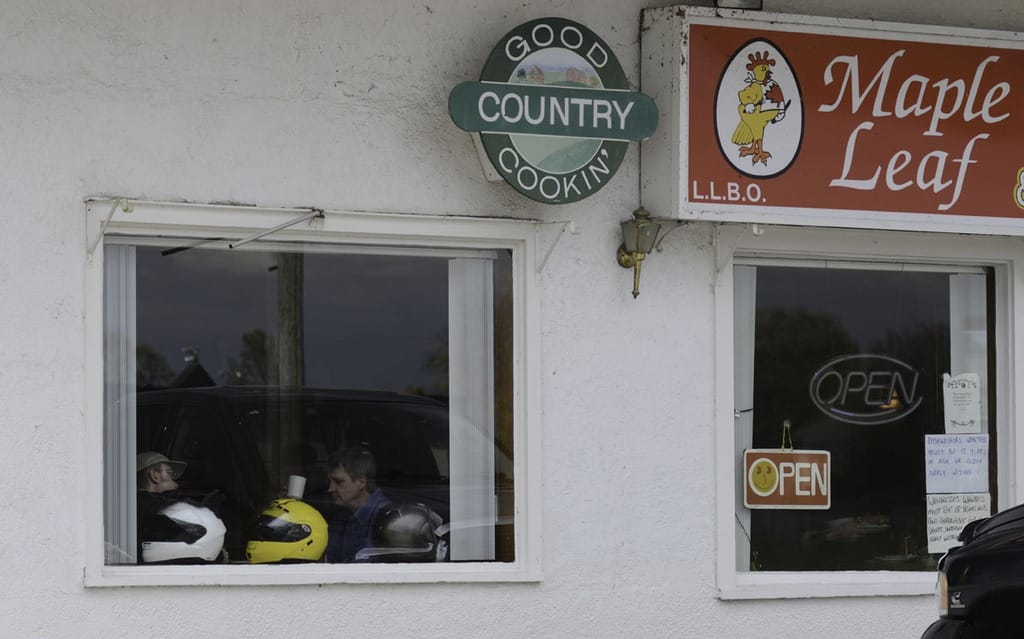 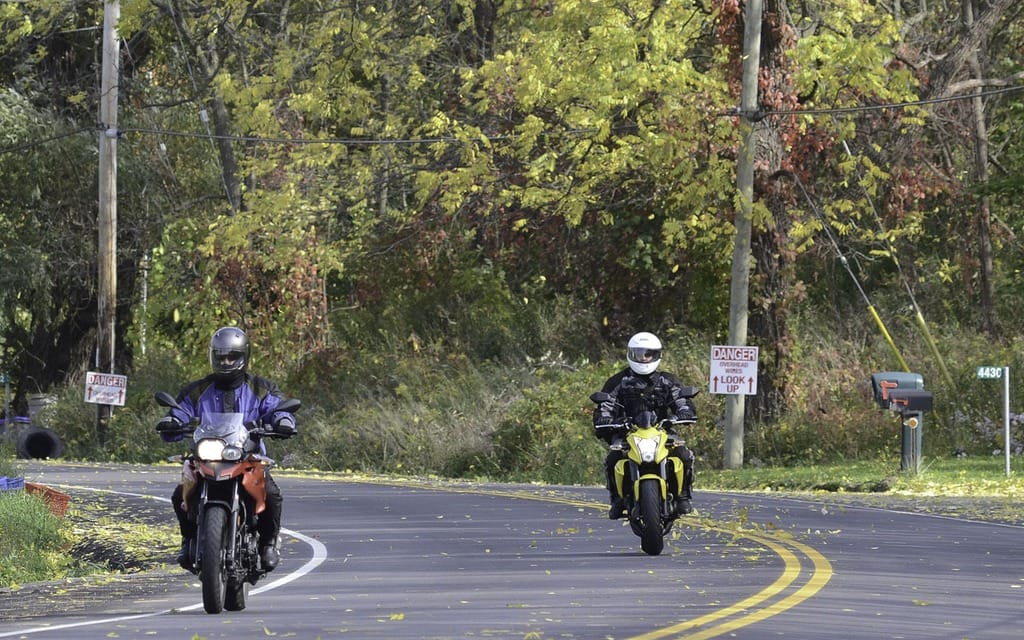 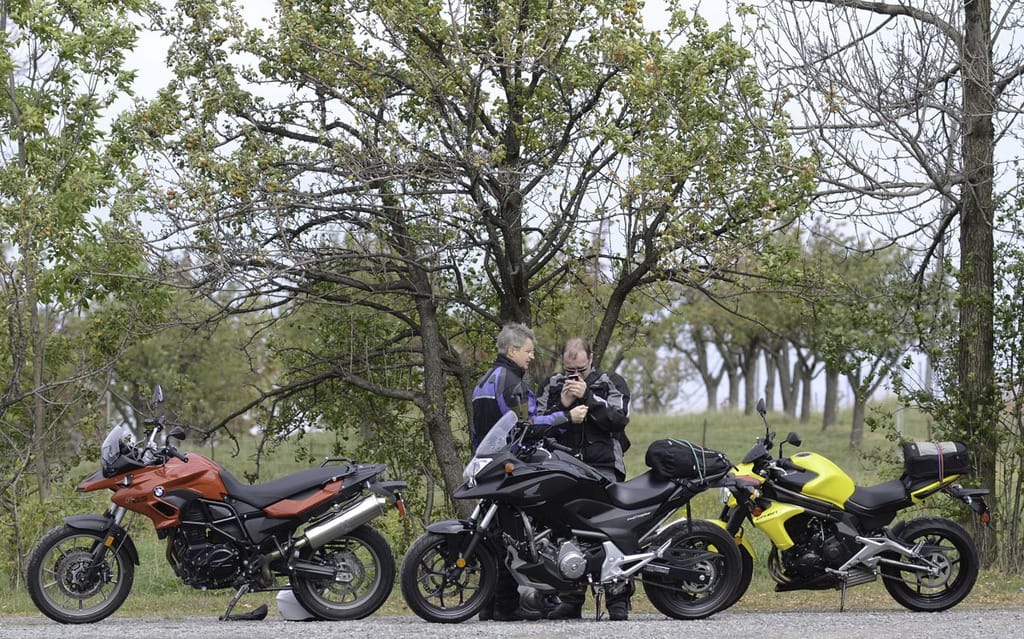 Like Christmas, the anticipation builds as the big day approaches. Here is the payoff; at last, the present to unwrap. So dim the lights, sit back and enjoy as we present: The 2012 Cycle Canada Fall Tour article.

The 155-metre long Finnborg nosed its way into the Welland Canal’s Lock 3 near St. Catherines, Ontario, moving at a speed that almost denied visibility. If it was any slower, it would be going backward. The Dutch cargo hauler was 17.2 metres wide, and it looked to us as if the Welland Canal was about 17.3 meters wide. We stood on a catwalk, freezing with other tourists who couldn’t quite work up a level of noticeable excitement (“No, move left Ulrich! I can’t see the ship for your belly. Okay, that’s better. Oh, for God’s sake, smile!”) as the ship mouldered into place.

Atop the ship’s superstructure was a thicket of radar and radio gear, much of which, I assumed, was assisting the helmsman in steering. As true as a bullet through a rifled barrel, the Finnborg sliced into that narrow waterway and proceeded to ream all of its 500-foot length into that confining channel without ever touching a side. Not a scrape, not a howl of tortured metal, not even a hint of lateral motion. I’ve heard of road racers hitting their corner entry mark at 170 miles an hour for 20 laps without missing by an inch, but at one knot, for 155 metres? Could Brett McCormick or John Hopkins be as precise?

Perhaps, and I thought for a moment as we stood freezing on the catwalk that the old Finn resembled the three of us on this Fall Tour 2012 in its precision, power, and grace, threading a fine, narrow line and making every turn of the wheel as precise as the gods themselves would have made it. The rumble and roar of engines, the sharp-eyed intelligence of the drivers, the careful planning of the routes, the bristling arrays of electronic gadgets — okay, we had a trio of iPhones and an Ontario road map, but still, to see us work with this stuff …

Well, maybe not, I thought. But for a moment, it was an analogy.

The same, perhaps, could be said of this Fall Tour. For it was Bremner, Poupore, and Thornton, without Graham. Thornton, who was nominally in charge of this abbreviated, two-day exploration of fall’s last great riding opportunity, passed map duties over to Bremner and Poupore, and so the 2012 Fall Tour became a democratic exercise, with destinations decided by vote, or sometimes simply the absence of a better idea.

Still, for two days there were three motorcycles: a Honda NC700X long-term test bike, ridden by Thornton because its faux fuel tank compartment was able to hold a camera with a long lens; a BMW F700GS, the 2013 version of the F650 twin, powered by a 798 cc engine that was tuned downward to resemble a 700 cc bike, ridden by Bremner; and a Kawasaki ER-6n, which was gifted with a 649 cc twin that reminded one of a strong-running Norton Commando in its British eagerness to rev and that was ridden by Poupore. There was the Niagara Escarpment and the Falls and a city that is both whacky and decrepit, and best of all there were country roads that drifted in all directions over a flamboyantly hued landscape.

First, of course, there was the escape from Toronto, a westward ho that thrust our three adventurers onto the Burlington Skyway near Hamilton, an hour’s ride from the Cycle Canada palace in downtown Toronto. The arching steel spans of the Skyway tower over the far western tip of Lake Ontario and vehicles plow through storming winds while far below the waters churn in frothing whitecaps; we gritted teeth and hunkered down tight-fisted on the handlebars of our three bikes, steering constantly against sideward wind forces.

We had been late starting, had been forced to turned back a few blocks from the office when I realized that the freezing feeling in my legs was not due to a full tank of cold gas, but to absentmindedness: I had forgotten to put on my Roadcrafter’s pants. It was after noon when we reached Hamilton, and our stomachs were grumbling. Bremner had heard of a place called the Maple Leaf Pancake House and was particularly enthusiastic about dining there. “My wife won’t let carbs into the house,” he told us as the waitress laid before him a plate filled with pancakes, “so I never get this stuff. Don’t tell her I did this.” Tim and I looked at each other as Paul ladelled pancake into his mouth. “Don’t worry,” I said. “Your secret’s safe with us.”

Fed, we hurried away, for there were roads waiting. A few minutes later we were winding along narrow highways in that tongue of land between Lake Ontario’s western edge and Lake Erie’s eastern, blowing through whirlpools of fallen leaves and past shuttered roadside stalls that a month ago might have smelled of apples and raspberries. Down Ridge Road and along Hwy 81, and near Beamsville we pulled over for a short break by a roadside market that advertised peaches but that had been deserted for a winter break. It felt like winter, a bit, with temps hovering around the 10-mark, but we were lucky, because the rain that had been uncertainly predicted failed to arrive, and even the tourists seemed to have found other places to be. The road swooped up and down through a few long S-curves, and the sun warmed us a bit. Everywhere there were leaves turning from green to yellow and red.

Early in the afternoon, we arrived in Niagara-on-the-Lake, where Bremner announced a problem: a screw had fallen loose in his eye-glasses, and needed fixing. The Leatherman utility knife in Poupore’s toolkit would not do the job, and so Paul wandered off to find a jeweller. Tim and I sat on a warm bench in front of a bake shop and watched tourists wander by; they walked past in their various styles of dress, and nearly all of them stopped and stared at the bake shop. Quite a few of them, perhaps regretting the imposition of a diet, took pictures of the bakeshop. I shook my head and considered the idiocy of such a thing, and then remembered that I had taken a picture of the bakeshop just five minutes earlier. After a little while, my iPhone rang. “Steve, it’s Paul.” I faked a panic attack. “Paul, where are you? Where did you go?” He had found a jeweller; they were working on his glasses; the operation was expected to take about 10 minutes. “Good luck,” I said, and then I went into the bake shop for a closer look at things.

With his vision restored, Paul joined us again, and we made our way into Niagara Falls along the gloriously quaint Niagara Parkway, not minding the slow pace and entertained by the views of what might have resembled a Charleston, South Carolina, street in the 19th century. In Niagara Falls we found a hotel that offered deeply discounted rooms to the few tourists who still wanted to be there, and later made our way to a little eatery they call the Keg and wolfed down some steaks and prime rib. Niagara Falls was ringing: there’s a casino and a lighted ferris wheel and haunted houses and palaces of entertainment that seem ready to scratch every kind of itch a tourist might have, and all the lights were on. It didn’t seem to be having trouble attracting people, even in mid-October, but in the middle of summer it’s probably like downtown Ho Chi Minh City. We were all glad to see it in the off season.

The following morning, there was frost in the air and it felt like a fine bright winter day as we motored toward a highlight of our trip. The Flying Saucer Restaurant is not really equipped for space travel, but appears to do a great deal of business serving customers. I thought of a science fiction short story called “To Serve Man” and decided not to enter the place, but was happy to soak up a little Niagara Falls kitsch in the parking lot.

Then it was away from there and off to find the oldest maple tree in Canada.

First, of course, there was the Welland Canal, and Lock number 3, where we observed a Dutch ship for what seemed like hours before Paul and Tim were finally ready to leave. The sun began to warm the air as we headed toward Pelham, a village south of St. Catharines, and there we cruised the main street, looking for this fabled maple tree that Bremner had somehow learned about. Paul and I stopped at a folksy garage, where he spoke to an old man who came out to greet us, and suddenly, behind us, I heard a screech of tires. And there was Poupore, laying on the rear brake of the Kawasaki and shouting at us. I let Paul continue his laconic conversation, turned the Honda around, and followed Tim.

Down a little dirt alleyway through fields that might have sprouted with corn in the summer, and in a moment, there on the left was a sort of yard, not fenced off but adorned with a large wooden information sign and a few small gravestone-like plaques. And in the middle of it, the Comfort Maple, named for the owners of the land who dedicated it to preservation of this, the oldest sugar maple in Canada. Maybe 500 years old, and so large that its trunk had split in two, and in its hollow places there was brickwork to bolster it. Branches shot out from the tree and reached for the distance, and there was a string of lightning-protective cable running from somewhere up in the tree down to the ground. And there we were with it under the bright October sun, and over our heads and all around us were leaves that the cold nights and sharp days had turned into a rapture of colour. Red and yellow fluttered around us as it had for five centuries there in that little yard, and we had nothing to say for a minute or two, and then we got back on the bikes, started the engines, and pointed our front wheels toward home.