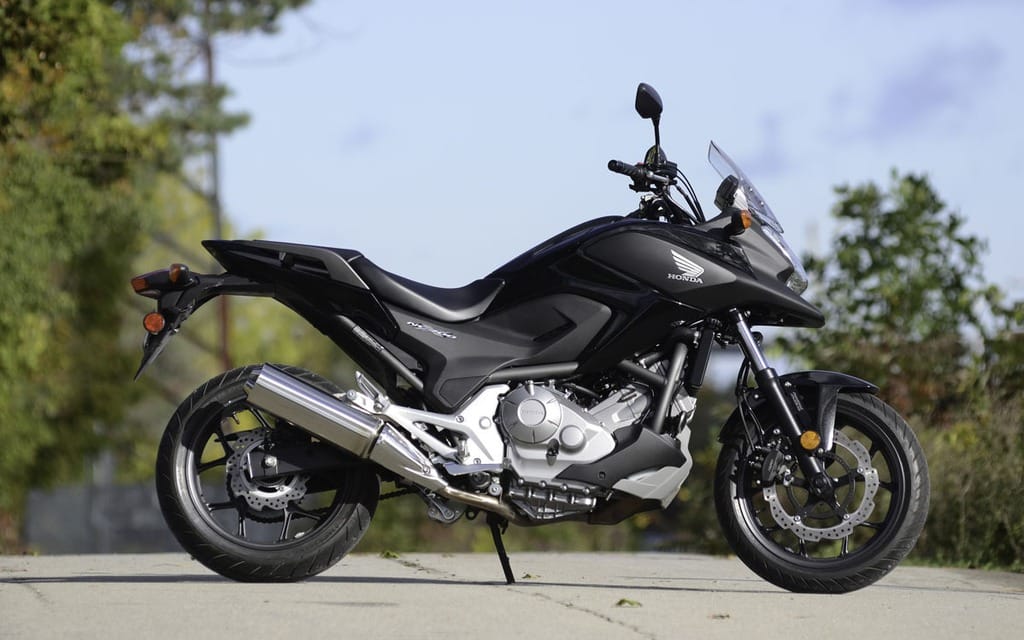 This is the last sidebar before the series wraps up with the main event. So dim the lights, sit back and enjoy as we present: The 2012 Cycle Canada Fall Tour.

Belly Of The Beast

Steve Thornton finds true companionship in a motorcycle with a stomach.

The first sensation a rider notices aboard the ER-6n is one of size: this is a very compact motorcycle. I didn’t find it uncomfortably so, and in fact the little 649 cc Kawasaki fit me quite well. Now, I’m either five-eight or five-nine, depending on who’s asking (I like to be tall for the ladies), and a six-footer might not find the bike quite so accommodating. Size is not the principal effect of this bike, though. I have a memory of a particular afternoon in 1970 or ’71: I was visiting a friend in Toronto, and someone came by with a 650 cc Triumph Bonneville that was in a fresh state of tune. He let me take it out, and for an hour or so I zoomed around the neighbourhood streets, and the feeling I got from that Brit-bike’s engine as I accelerated through first and second gears was exhilarating. There was a particular combination of horsepower and vibration that felt like sunshine on cold skin; it was sensual and tantalizing. I don’t know if the engine characteristics of these two bikes, separated by 40 years, are anywhere near similar, but the feelings I got from the Kawasaki as I accelerated through the gears reminded me of that afternoon on a Triumph Bonneville. It was a good day.

The F700GS, on the other hand, reminded me of Ronald Reagan and the “Harley tariff.” In the early ’80s, Harley-Davidson whined to the U.S. federal government about the impact of Japanese motorcycles on their business (if only Jon Stewart had been around then, I’d have some nice quotes for you), and America’s favourite Dad imposed a tariff on imported motorcycles. The Japanese companies dropped their 750 cc bikes down to 700 cc to slip under the tariff, and for a few years, 700 cc motorcycles were common. That particular engine size has never been normal, however, and it seems odd that BMW would make such an engine. Or it would, if they had, but the F700 is in fact an engine of 798 cc capacity, down-tuned to perform like a 700 (though what 700 they used for a comparison of performance is anybody’s guess). It makes economic sense, I suppose, to build one engine (the F800 series) and then tune it for a variety of uses and call it what you like (F650 last year, F700 this year, and all the F800 models, of course), but most people call it just plain weird. Weird, however, does not describe this bike. It feels a little tall when you sit on it, but is not in fact very challenging for a short rider like me. I found it to be a gentle soul, well-balanced and easy to manoeuvre at a walking pace, yet capable of invigorating speed, and like most dual-sports, its high level of ground clearance invites a sporting pace. Where the 700s of the early ’80s were reined-in high-performance bikes, this is a tuned-up version of a motorcycle intended for new riders, but even a rider who remembers motorcycles of the ’70s and ’80s can enjoy this identity-confused Beemer. There’s nothing, really, not to like.

And that leaves us with our long-term tester, the Honda NC700X. That was my choice for our 2012 Fall Tour, primarily because its fuel-tank cover is really a compartment for stowage of various items (though not, regrettably, a full-face helmet), including the camera that allowed us to illustrate this Fall Tour story. The NC700 did not remind me of Ronald Ray-gun, for some reason, though it’s a true 700 (actually, a 670 cc parallel twin). In fact, it didn’t remind me of anything. It’s about as unprepossessing a motorcycle as one can imagine; you might even call it a wallflower. And yet … it’s as if Honda’s designers said to each other, “Let’s build a motorcycle that makes people feel confident, as if they were expert riders, right off the bat,” and then built it.

The NC700 is not without flaws: it is a bit tall in the saddle (I can reach the ground with both feet, but cannot do it flat-footed), and it’s not hard to stall the engine on take-off; however, it’s a very comfortable motorcycle and with optional hard luggage would make a reasonably effective touring mount, which is what I used it for. Without a real windscreen (what it has is about 15 cm tall and blocks little wind) it will never be a true touring motorcycle, but that’s not the purpose of this model. What it is, is a sort of faux dual-sport, with the general appearance of something that you’d take down a trail, but without the equipment.

Regardless, the NC700X is comfortable, light, nimble, and undemanding. It accelerates briskly, if not thrillingly, when you roll on the throttle, and its combined ABS brakes are effective, its long-travel suspension is plush, and some would say it’s handsome. One hallmark of the NC700 line (there is also an NC700SA model) is its low-range engine. The first time you ride this bike you’ll hit the rev limiter in first gear well before you’re ready to shift, but you’ll get used to that quickly. For a bike with a 6,500 rpm redline, it feels a little bit soft on torque in the low ranges, but it’s only a 670 cc engine, after all. Like the other two bikes on our Fall Tour, the NC700X is a model of simplicity and offers reasonable comfort. Unlike the other two, it offers something that every motorcycle should have and almost none do, and it’s right in front of you every time you sit on the bike. That “fuel tank” storage compartment is about as useful as a backpack, and a whole lot more convenient. It’s just too bad they couldn’t make it large enough for my Shoei.