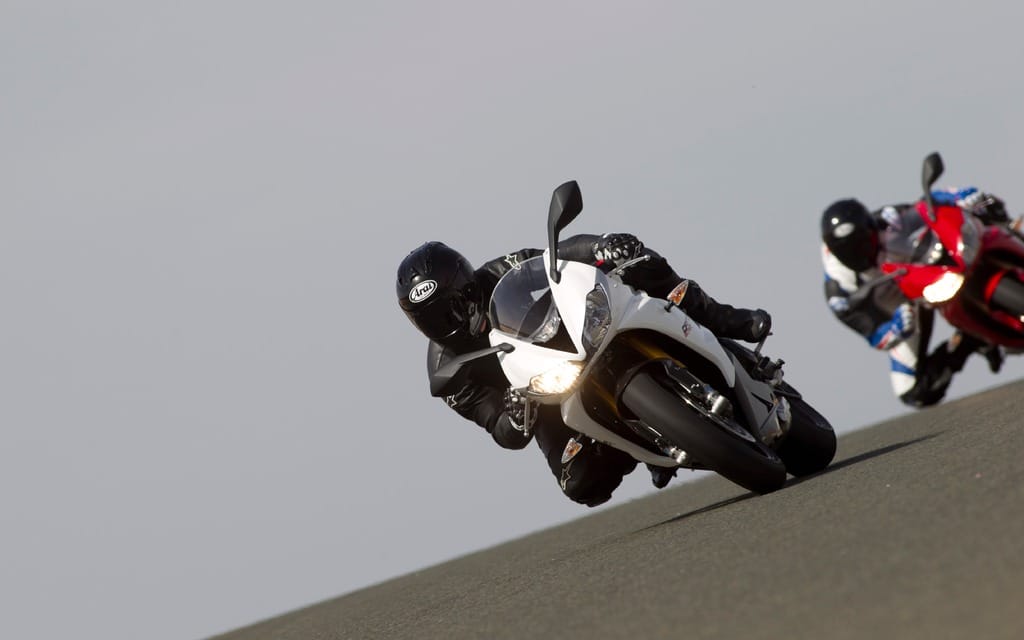 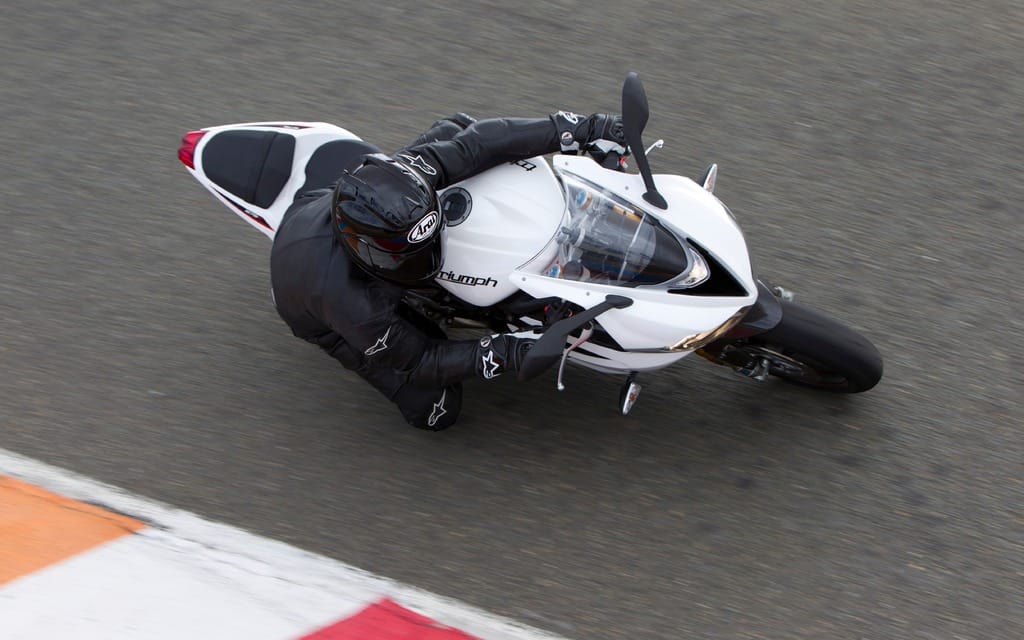 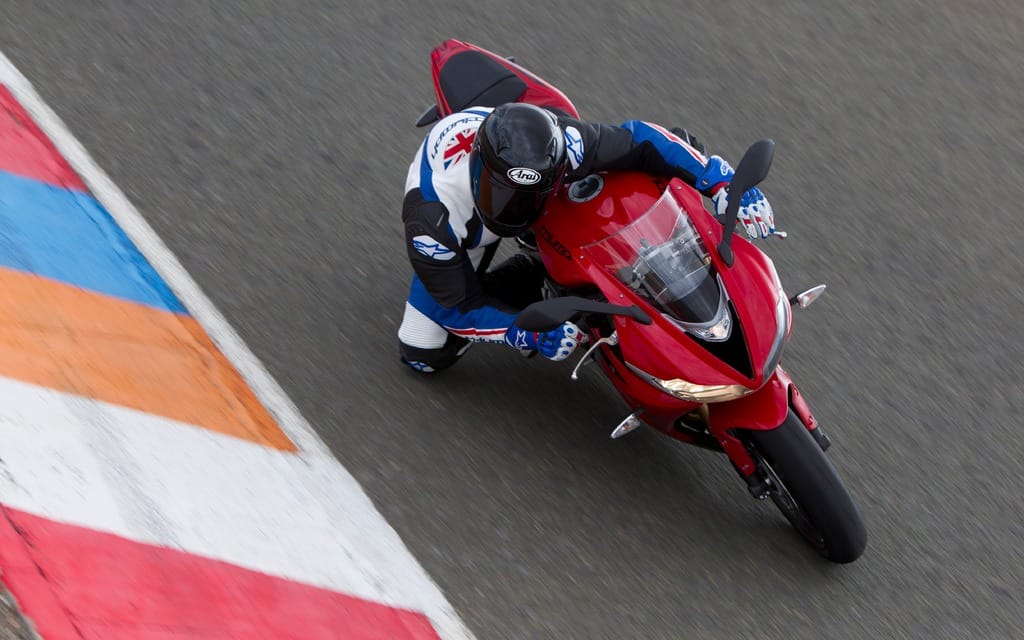 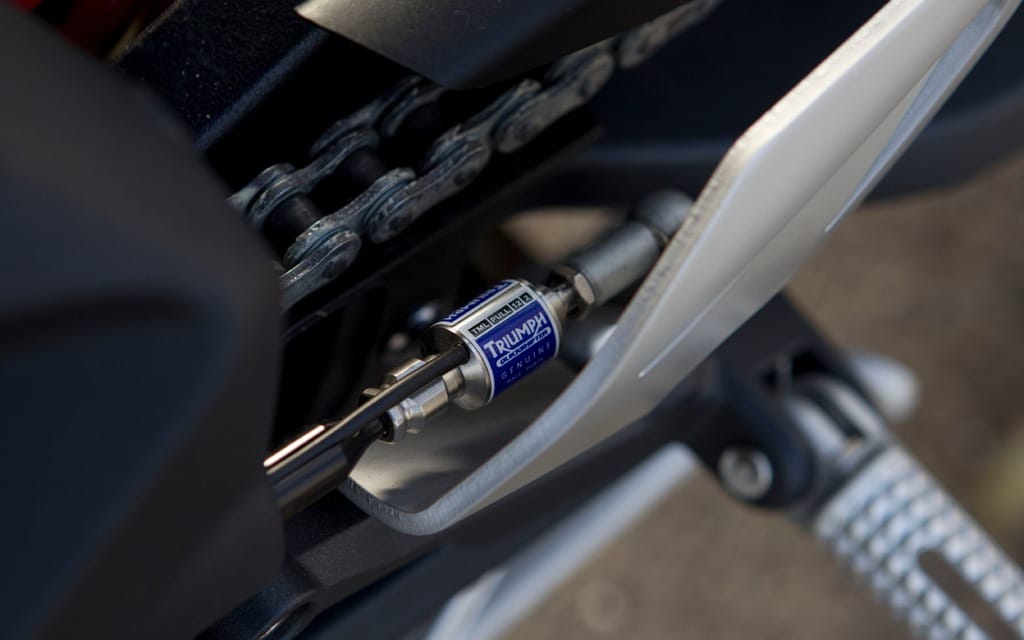 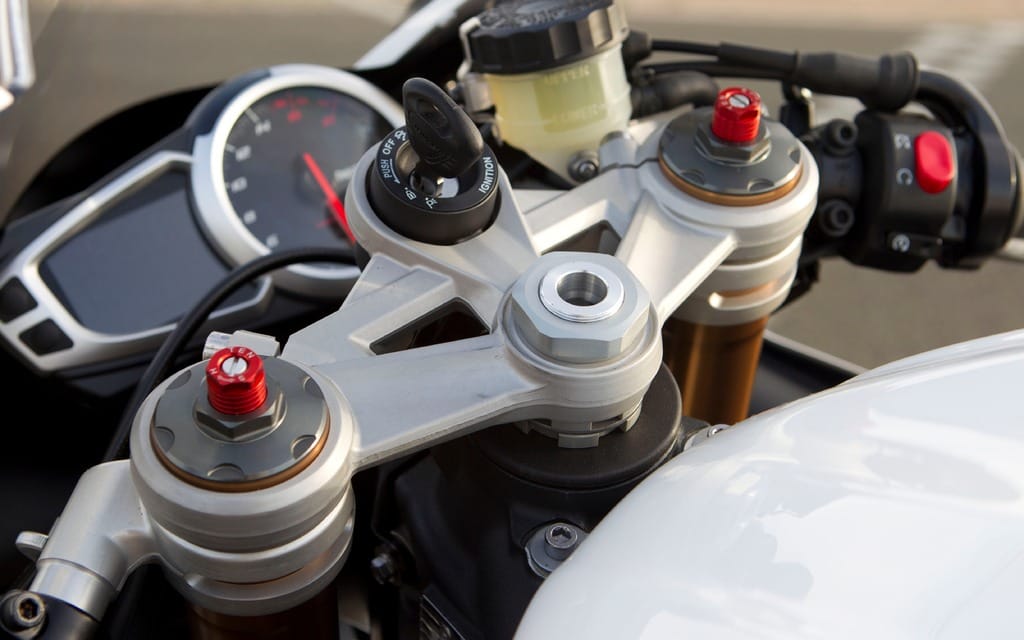 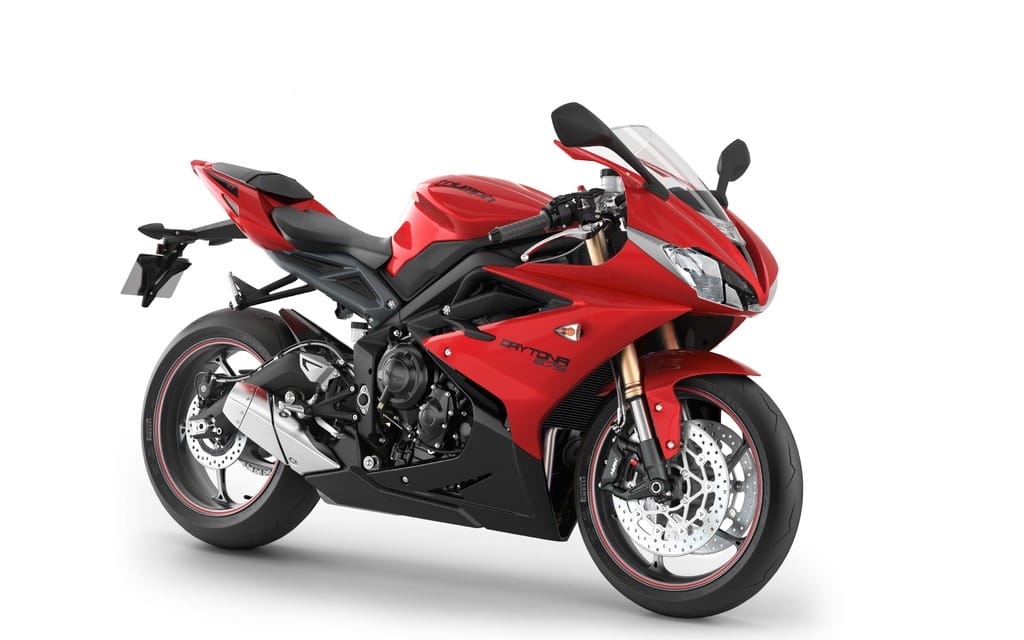 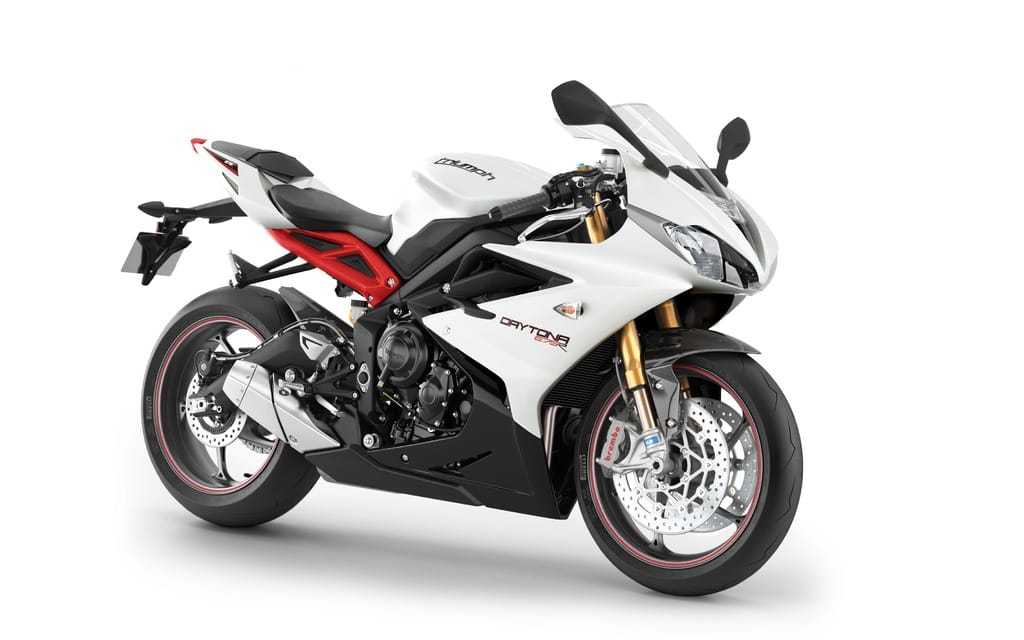 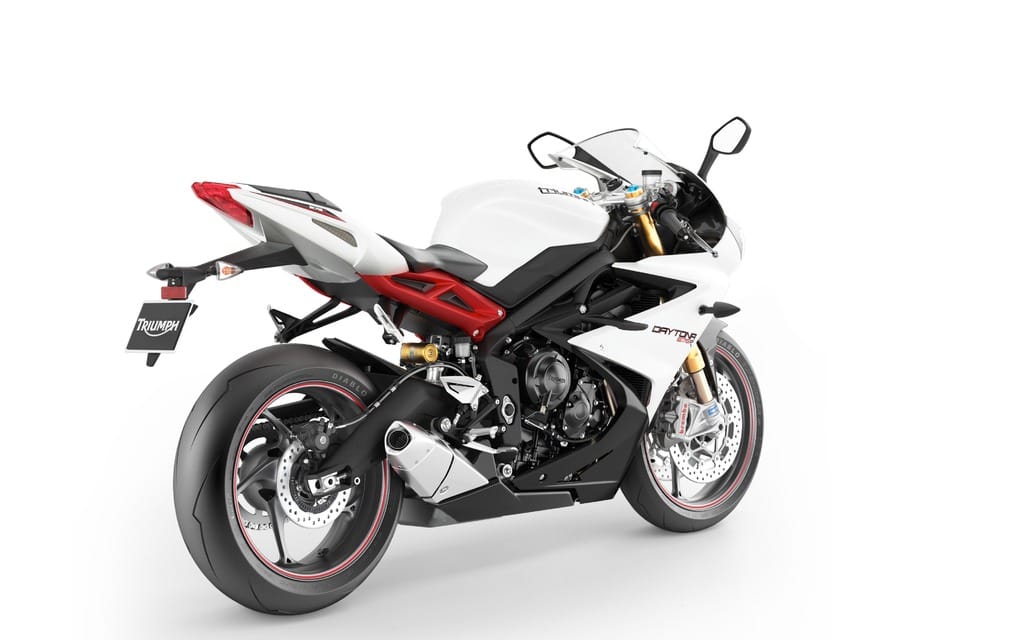 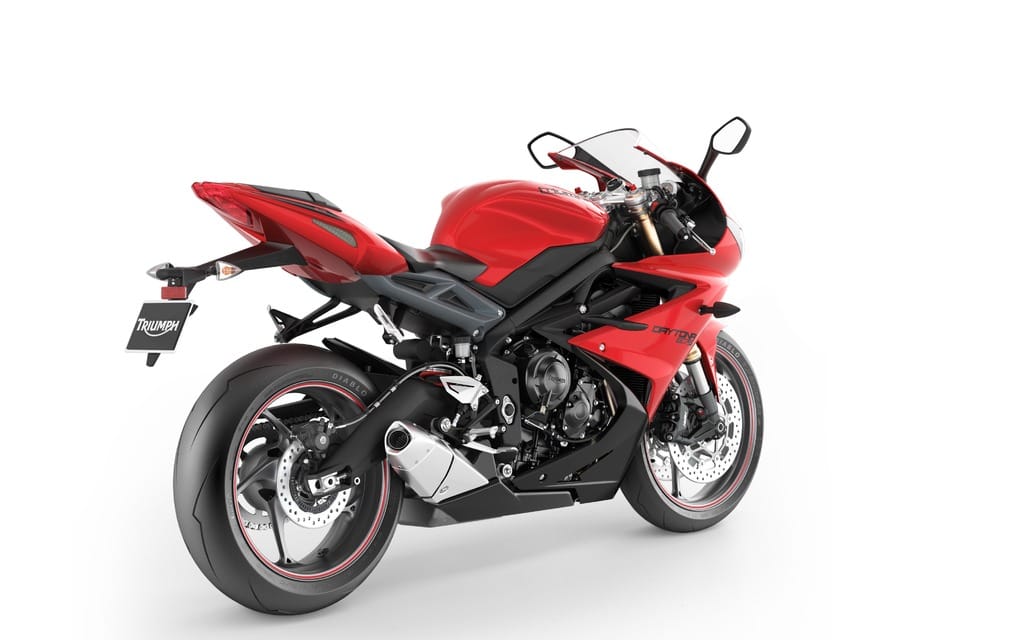 The frame incorporates the intake duct and is constructed from fewer sections for stronger design and a shorter wheelbase. A high-pressure die-cast aluminium rear sub-frame is slimmer than before. Weight has reportedly dropped 1.36 kg (3 lbs.).

Triumph claims horsepower increases by 2, ringing in at 126 hp at 12,600 rpm. Redline for the three-cylinder mill increases to 14,400 rpm, made possible by larger bore and shorter stroke. Valves are titanium, and the cylinders are each fed by a pair of injectors. A slipper clutch controls wheel hop on downshifts and Triumph reports a reduction in level effort over last year’s design. The redesigned exhaust moves the muffler from under the seat to below the engine, centralizing mass.

Wheels are lighter, decreasing unspring weight and lowering inertia. Forks are KYB and the standard rear shock has been revised. Pirelli Supercorsa tires are fitted as standard.

The “R” version of the Daytona 675 returns, boasting Öhlins suspension front and rear, Brembo monobloc calipers and switchable ABS. The 675R is fitted with a quick-shift gear change with upgraded software. Carbon-fibre accents in the cockpit and rear fender along with a red rear sub-frame and red wheel pinstripes make the R version visually distinctive.

Triumph offers a line of accessories including CNC machined components, including brake levers, reservoirs and colour-coded oil filler caps and dipsticks. Light luggage, LED signals and Arrows mufflers will also be available, along with alarms. The quick-shifter can be added to the 675 model as an option.