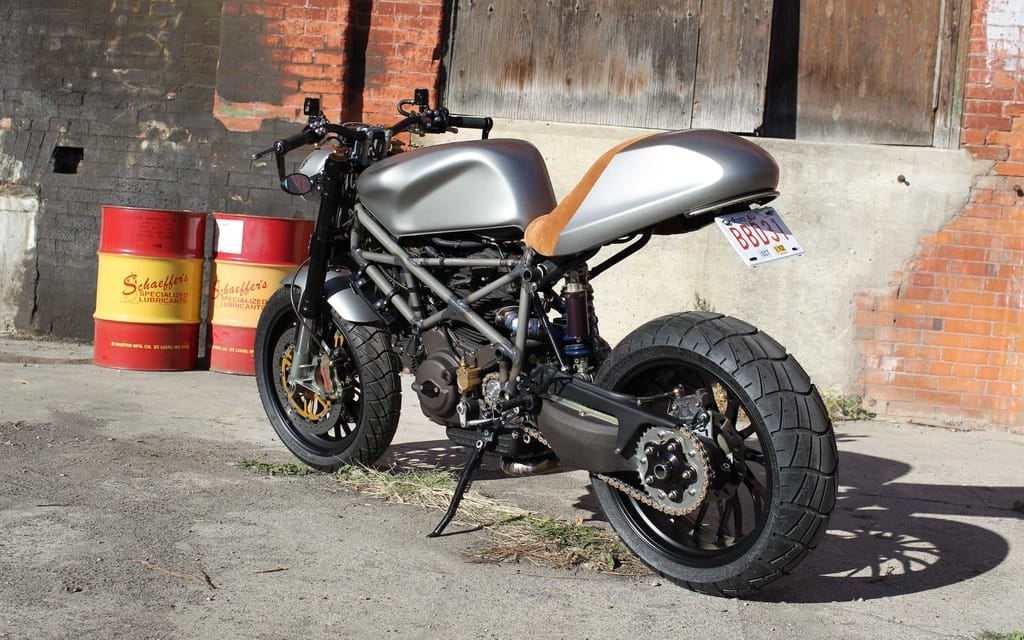 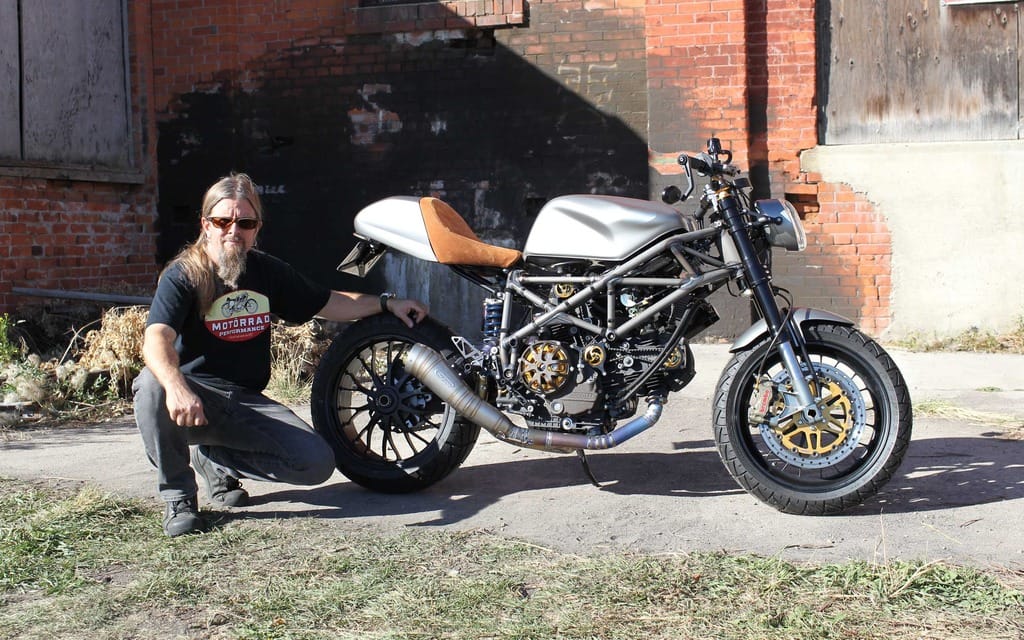 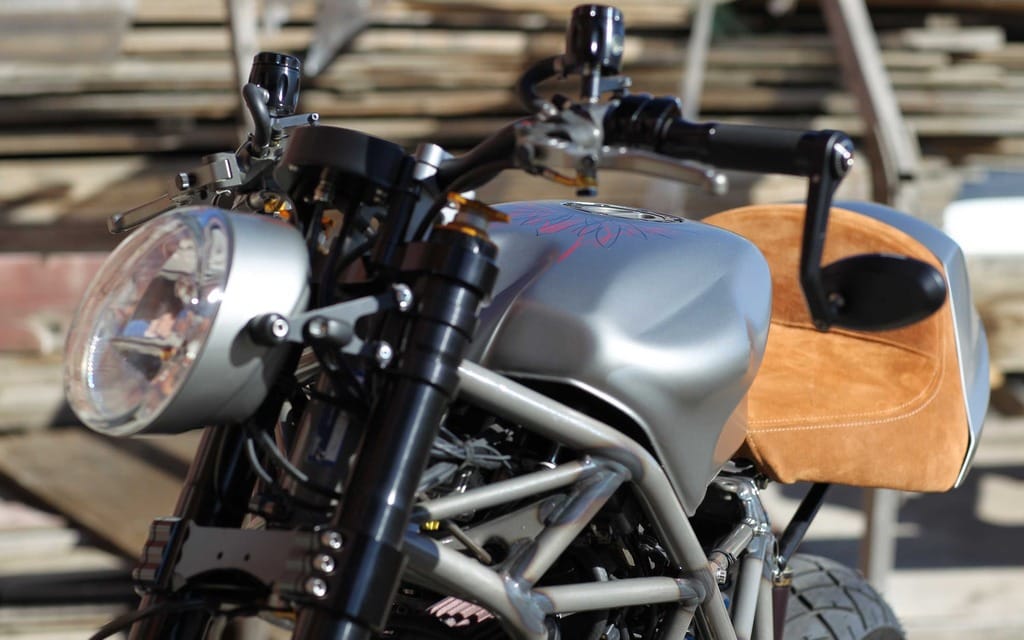 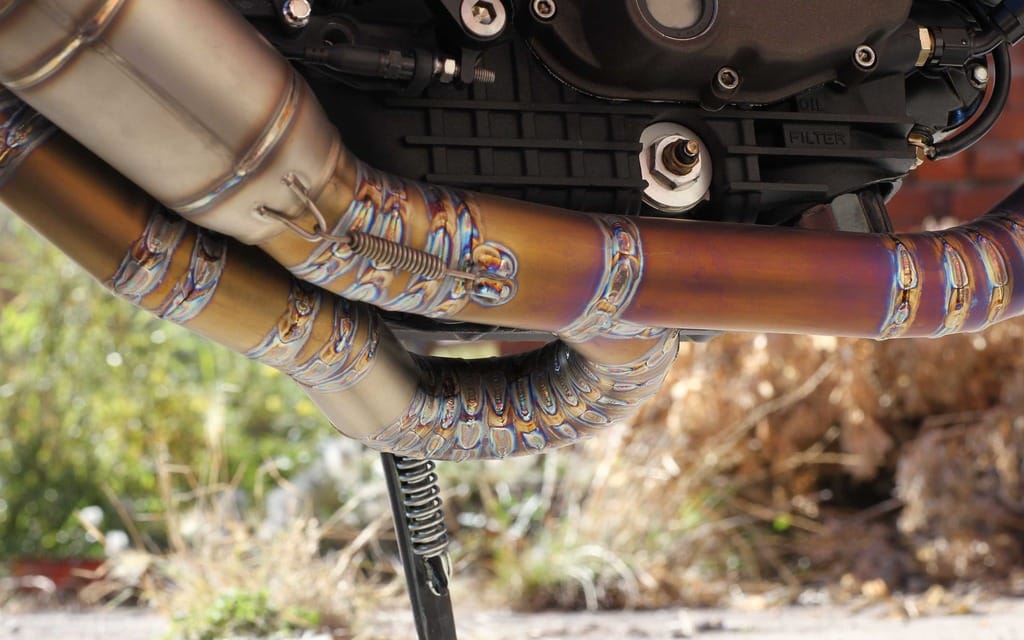 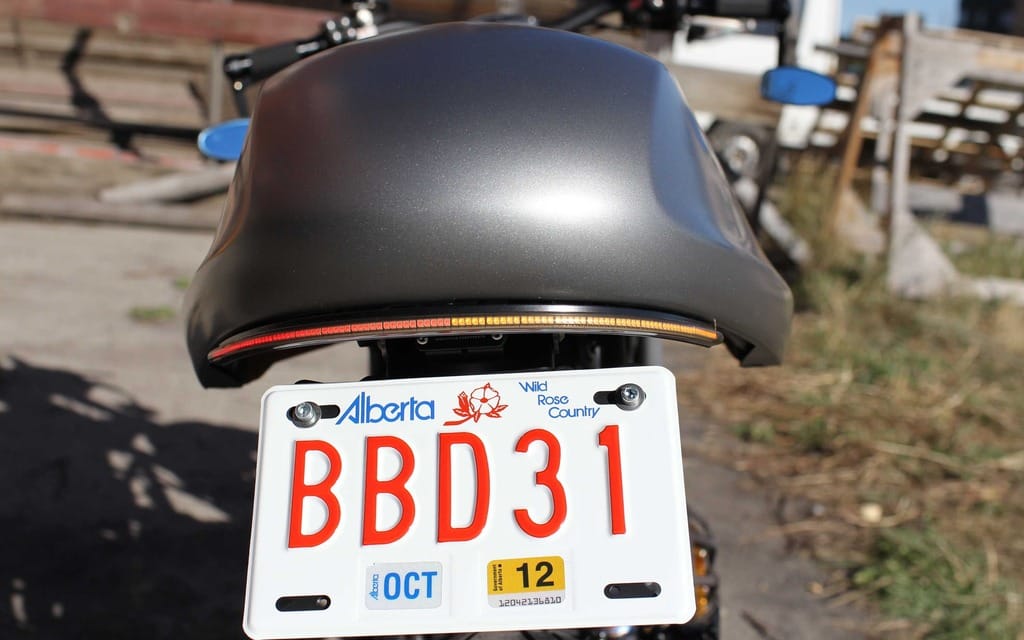 A Ducati A Long Time Coming

Time ran a little slower for this hybrid Ducati, but some things should not be rushed

One of the most intriguing views of this mutant Ducati comes from the rear. Builder Paul Shore, who began the project in his spare time at Motörrad Performance, the Calgary tuning and building shop he opened in 2003, made the LED taillight strip to fit directly under the suede seat, and the flashing yellow and red diodes work through dual electrical circuits to wink for braking, signalling, or simply illuminating.

The seatback taillight isn’t the only unusual feature of this 904 cc air-cooled Ducati, and in fact unusual features are not really its most prominent asset, but the LED strip does suggest the work of a builder who didn’t want to cave in with easy methods and simple fixes. Unfortunately, he did succumb to financial pressures, but we can sympathize with that. “I think I had about 13 (thousand dollars) into it and it was still just sitting as an engine and a rolling chassis in my front window.”

Shore started the project in 2007 with a Ducati 996 frame, and then added a 900SS engine that he bought on eBay with 11,000 miles on it. It took some work to get engine and frame mated: “We had to cut and reweld the frame, and we had to mill the engine cases to get it to fit the swingarm and frame.”

Two years went by, and the project ran out of steam, the bike became little more than an expensive display rack for parts at Motörrad Performance. Then one day a customer felt that it just had to be his. A deal was made, and a project that had been languishing gained new energy. Last summer, it was finished, and the result shows the efforts of several people, including the new owner, who we’ll call Lee, and who supplied money and some ideas for the project.

Shore had the frame sandblasted, and then he took it next door to Trillion Industries, where Derek Pauletto got to work on it. Pauletto is an inventive metal fabricator, and he removed fairing tabs and cleaned up welds with a TiG welder on low heat, which left the attractive scorched appearance on the frame joints and did not warp the tubing. Pauletto also attached a pair of removable crossbar stiffeners (“an old World Superbike trick,” says Shore), and built the exhaust header.

The bike’s owner had specific ideas about that, Pauletto remembers. “He said he wanted something unusual, he wanted titanium, and he wanted that sectioned look that you see on race bikes, the GP bikes.” Pauletto had some titanium stock, and he designed exhaust flanges on his computer and then sent the files and some titanium plates out for water-jetting, which is a means of cutting metal in particular ways by spraying water loaded with fine grit at a pressure of about 40,000 psi. Then, to make the sectioned exhaust header, Pauletto starting cutting his titanium tubing. “I cut a whole bunch of basically pie-shapes, in a whole bunch of different lengths and angles, and deburred them all, and then just tried to start curving things appropriately, and tacked every single one in place, and once I had them all tacked I took it off the bike, welded it, and replaced it in sections.”

The colours on the pipe are the result of allowing oxygen to get into the welding process, says Pauletto. “Normally I’d weld titanium in a vacuum, or in a purged box. But a lot of guys like that rainbow colouring, so for that I weld in open atmosphere and it oxydizes more quickly.” It was not difficult to get the muffler and exhaust header to mate, though it was labour intensive, Pauletto says. He got the muffler hung in place, and he had the header constructed, so he worked with sections from the muffler and from the header until his exhaust pipe met in the middle. He tried to get both pipes to a nearly equal length, but did not tune the exhaust system by building to a specific length, which manufacturers do in order to assure exhaust back pressure that effectively scavenges spent gases out of the engine. That didn’t really matter for this bike’s use. To ensure that the two exhaust pipes were about equal length, he taped one end of each, filled them water, and then measured the liquid volume.

Pauletto says he’s happy with the result. “It’s was a challenge — titanium isn’t the easiest metal to work with, nor is it cheap; I buy titanium by the inch, not by the foot. So you don’t want to screw up with it.”

He says the advantage of using the titanium pipe is that it will never rust, and it may turn somewhat golden near the cylinder heads, but will never really lose its looks. It’s also light and resistant to damage.

Back in the hands of Paul Shore and his shop assistant Keith Smith, the Ducati started to take on a finished-bike appearance. He had the modified frame powder coated, and sent out engine cases for powder coating as well, with a pebbly black coating called Sandtex, and an “Oil-Rubbed Bronze” powder coating on engine covers. The engine itself was refreshed with new bearings and gaskets, but was not internally modified.
To turn the engine and chassis into a motorcycle, he added a number of Ducati parts: fork upper tunes and a tank from a 916, a subframe taken frmo a 748 and modified “quite a bit” to fit, a tail section from Sport Classic, a handlebar from a Monster. The headlight came off a Harley-Davidson V-Rod, and Bob Klassen, whose work was featured in the January Showcase, wired up the light and other bits. Fork lowers and wheels are from PVM, a German company, and the rear shock is a Penske unit. The switches and instruments are also from a German supplier, Motogadget, and levers are from CRG (Constructors Racing Group), a U.S. Company. Master cylinders for brake and clutch are stock Brembo units, and discs are from Spiegler Performance Parts, another American supplier. The mufflers are from Leo Vince.

In a sort of homage to “the old K-bikes that BMW had,” Shore dropped the front brake line through the steering head. “It runs through the steering tube and comes out the bottom of it. I bored a hole in the adjuster nut in the centre of the steering head, and I made a threaded tube that goes up through the centre of it.” The line attaches to the tube with a banjo bolt, and at the bottom of the tube is a 45-degree outlet with two brake lines exiting, for the calipers. “I was trying to figure out how I could dump both the brake and the clutch lines through there,” says Shore, “but that would have been a little bit of a shit-show, I think.”

To finish it off, he sent parts out to Cyclemania Artworks in Okotoks for painting. In the middle of April, this Ducati hybrid was still sitting in the Motörrad shop, waiting for some decent test-riding weather, but it has been run, and Shore says it sounds good. “It’s got such a nice subtle sound, it’s amazing. I thought it might be obnoxious, but it’s not at all, it doesn’t sound any worse than any other Ducati that’s had a really good quality pipe on it. It could have something to do with the titanium header, because different metals resonate differently.”

For the bike’s owner, it’s a one-of-a-kind moveable artifact, and for Paul Shore, Derek Pauletto, Bob Klassen, Cyclemania Artworks, and Keith Smith, the 904 cc Ducati is a project that’s finally been finished, and that demonstrates that if you put together some patience, a high-grade of inventiveness, a lot of work, and some guy who walks into the shop with a pocketful of money, you can wind up with something very satisfying.

And when they see the view of it from the rear, they just might think that’s a personal message coming from those winking LEDs.