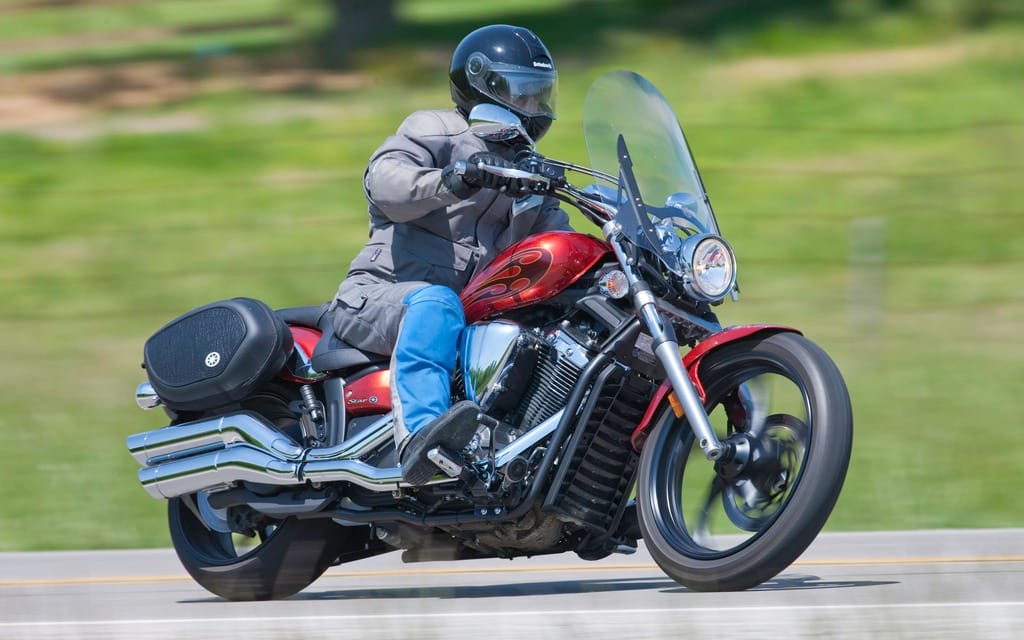 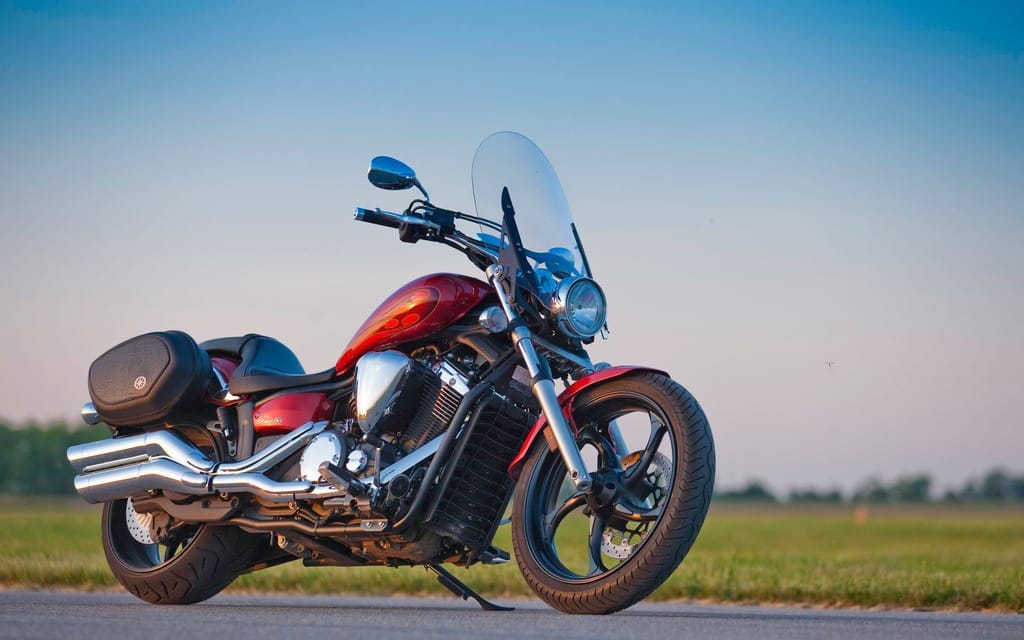 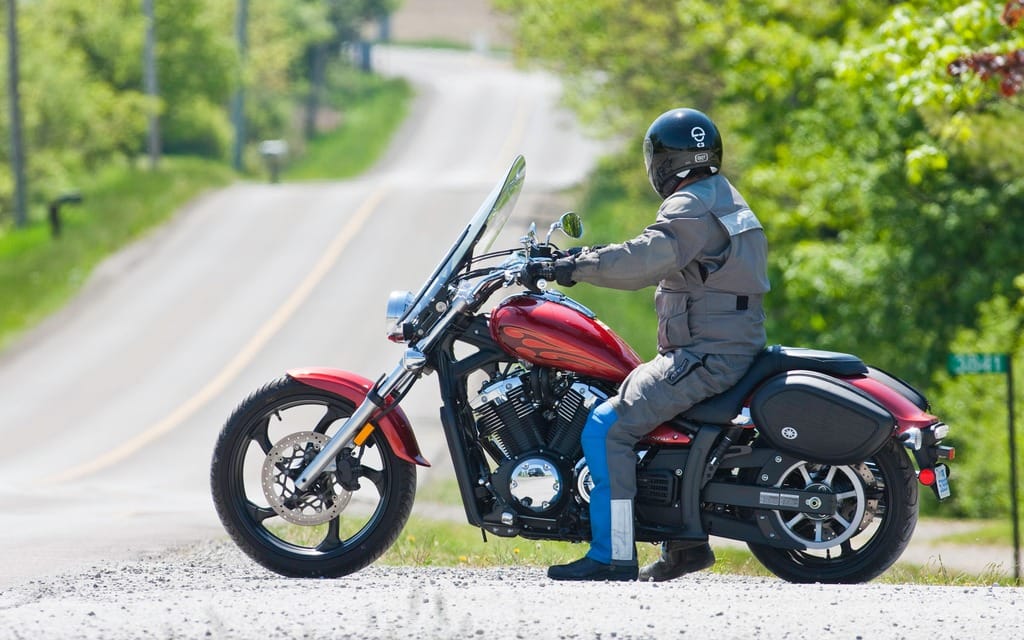 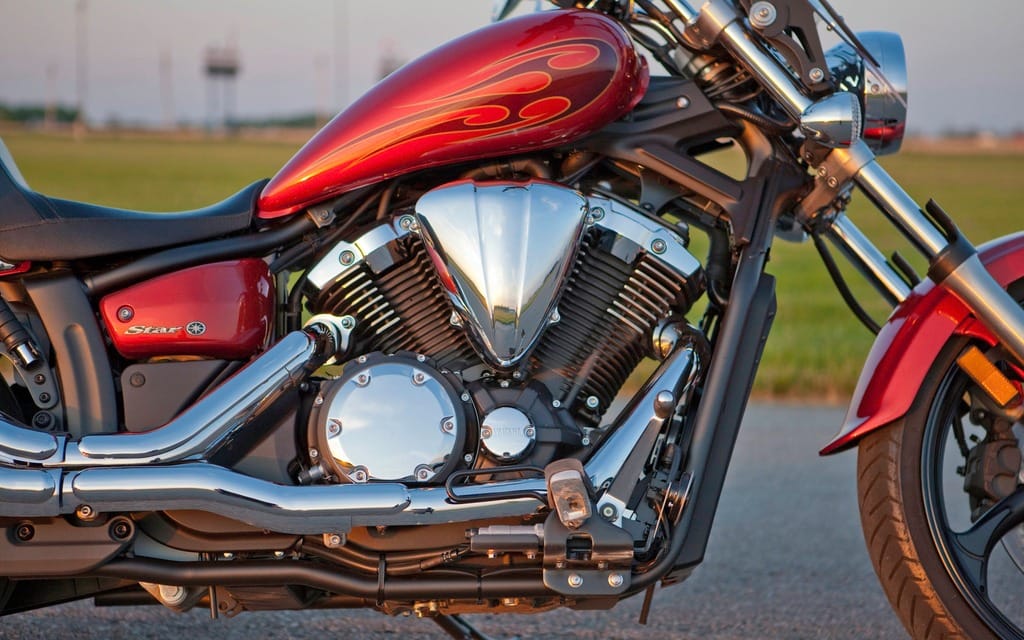 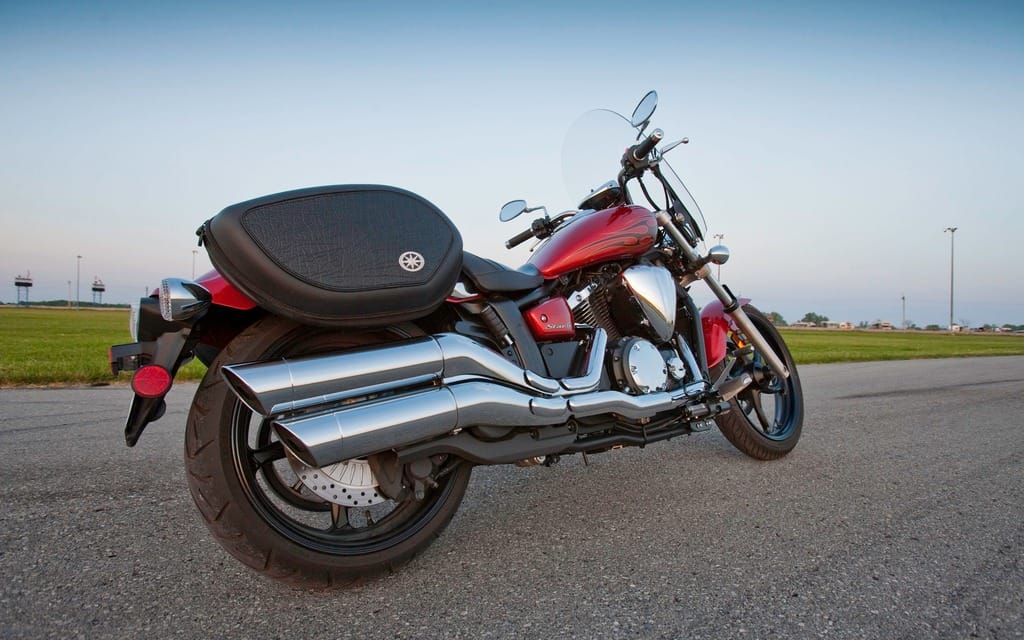 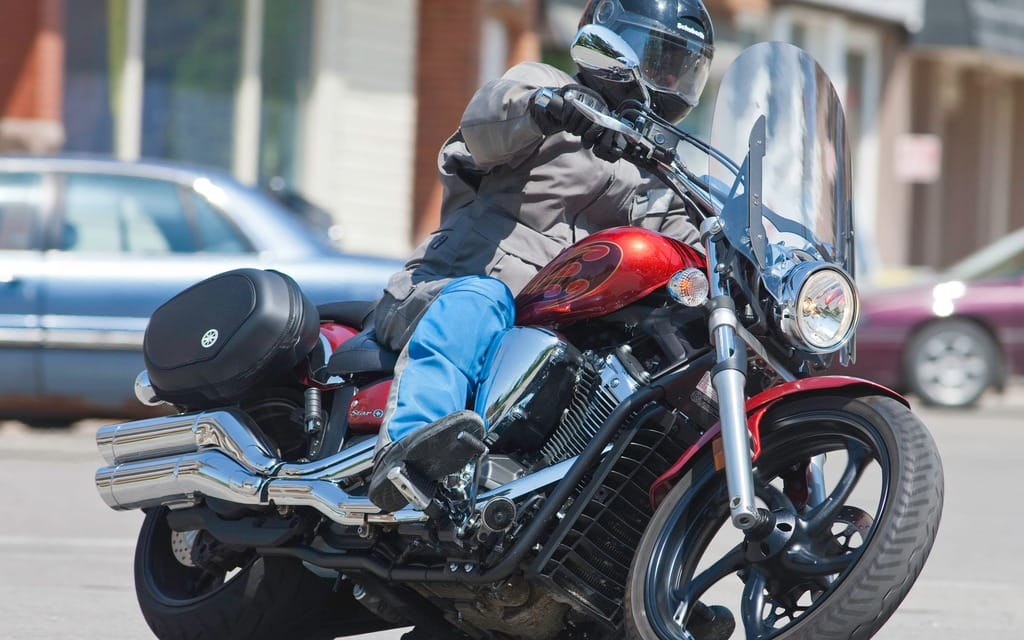 Yamaha strykes it nearly right with a low-buck, big-bike cruiser

It was near Belleville, Ontario, late on a hot afternoon that the Yamaha Stryker demonstrated some of its winning, and not-so-winning, characteristics. Two tractor-trailer trucks had collided head-on in the middle of the extremely busy 401 highway a couple of hours earlier, and a thick, black smoke cloud had erupted onto an otherwise pretty sky as a firestorm melted the highway. Police closed the 401 for a stretch of about 30 km, and so Old Hwy 2, south of it and parallel to the 401, suddenly became the only way to move for thousands of vehicles.

The two-lane road was choked with traffic, which consisted mostly of big trucks rolling along at about 5 km/h, then stopping for a while, then going again. In the middle of that, a rider on a Stryker was a bit like the bald-headed guy in the 1972 film “Jeremiah Johnson” who was buried to the neck and roasting in brilliant sunshine. It was not possible to move fast enough to develop a breeze, or to relax the clutch lever except for moments with the transmission in neutral and the bike coasting. There was no point in pulling over and hardly room to do it, and the line of trucks was so long and so dense that passing any of them would have been folly.

The Stryker’s clutch lever operates via cable, and only moderate force is required to pull it, but the lever itself is big, in keeping with the general theme of the bike, and it’s a little too far away from the grip and is not adjustable. Yamaha says these “extra wide front brake and clutch levers provide a quality feel,” but we’d prefer less quality and more comfort in the feel; in extended stop-and-go riding, it left the operator with a sore left hand.

The seat, however, was comfortable, the reach to the handgrips was natural and comfortable, and the engine performed well at ultra-low speeds, so in other applications — on a farm, say, where stop-and-go traffic is minimal, the Stryker might perform well, a kind of rakish, two-wheeled tractor.

About an hour later, the truck traffic on Old Number 2 turned north again, and the Stryker was set free to explore higher limits with the black smoke of a highway catastrophe rapidly disappearing in the background. On the dull ride back to Toronto, Yamaha’s answer to Honda’s Fury was a generally comfortable conveyance, though the rear Monocross shock thudded the spine, sometimes painfully, on highway bumps.

It’s been said before, but bears repeating, that the sitting position of most cruisers is not as comfortable as it looks: the feet are thrust forward of the rider, so the legs take no weight off the rider’s perch, and the spine then supports the weight of the rider’s upper body. In this position, the body is naturally more sensitive to highway shocks, and even a better rear shock absorber might not prevent uncomfortable jolts when the wheels encounter irregularities. We’ve noticed this characteristic on other cruisers, many of them in fact, so don’t blame Yamaha exclusively. The single rear shock lies horizontally under the bike and is adjustable for spring preload; except for its inability to absorb highway flaws, it worked well.

In fact, the whole package worked well, when it was not subjected to unusual stresses. The 1,304 cc engine is rich in torque and provides a nice, throaty note out of the 2-1-2 exhaust pipes, and the liquid-cooling system works well, even on a slow, hot afternoon ride. Occasionally, in those conditions, a fan began operating, but the engine continued operating normally. The rad, placed between the front frame downtubes, is visible but not intrusive, and so a casual observer might not think the fake cylinder fins look silly.

There is no tachometer among the instruments, but Yamaha claims a torque peak (almost 79 lb-ft) at just 3,500 rpm, and running the engine much higher than about 5,000 rpm provides no boost in acceleration. The thing can lug along in the basement forever, and shifting at 3,500 produces a satisfying lunge. At times when it was necessary to accelerate hard, the Stryker moved up to illegal speeds very quickly, in fact.

It also slowed down very quickly. With just one brake disc in front (320 mm) and a single (310 mm) behind, the 293 kg Stryker is able to slow very quickly and without drama. Long, low bikes like this one do offer favourable braking characteristics if provided with good components, and while the $12,599 retail price suggests that compromises were made, they were not noticeable in the brakes. A wide, 210 mm rear tire helps in that regard, though we found the front brake unusually effective and controllable for a long cruiser with a tall, 21-inch front wheel.

Also effective was the work Yamaha engineers did to provide what looks like a large rake angle and what feels like nimble handling. Long rake and big trail is a curse on handling anywhere but the Prairies, and the Stryker’s 34 degree rake is long. In order to make the bike look more like a chopper, the engineers added some additional visual rake; they built in a six-degree yoke offset, so the bike looks like it’s got a 40 degree rake but responds to steering inputs with the characteristics of a 34-degree rake. It’s very simple, but clever.

And it works. The Stryker almost flicks from one turn to another, and minimal effort is needed to initiate a turn through the handlebar. It’s stable at speed and needs only a slight touch on the bar to remain straight on course, but it feels smaller than it is when the rider initiates a turn.

Until we put it on a race track, we felt that the Yamaha was gifted with unconventional ground clearance. Turning hard on a closed course showed us how wrong we were, but on the street, the Stryker touches down later than many other cruisers and will likely never be grounded by most owners.  It’s fitted with footpegs up front, and while that may seem like a downgrade from the increasingly common footboards, it’s not. Because the legs are stretched forward when riding, air pressure at 100 km/h or more on the knees and shins tends to push a rider’s legs outward and press the feet off the boards, so constant tension is required at speed, which can be tiring. The footpegs on the Stryker so something to prevent this from happening. And it was even possible to wedge the toe of the left boot under the gear shift lever for additional stickiness.

Our Stryker was fitted with a couple of accessories. A quick-detach 22-inch windscreen ($148.95) reduced wind pressure on the rider and eased what have been a severe strain on the arms at highway speeds. Unfortunately, it was just tall enough to cut across the rider’s vision, which necessitated either sitting uncomfortably tall, or slumping. Strangely, this was true for both our six-foot tester and our five-nine tester. The windscreen also provided some distracting reflections. Still, it’s a $150 accessory — whaddaya want for that price? Our Stryker also came with some fake-leather saddlebags $219.95) that clipped to a minimalist railing ($132.95) on the sides and Velcro’d together under the seat. They were unusually small, though we were able to stuff sufficient gear in them for a few days on the road, and they were fitted with zippers. And not just one, but two, so there was an outer zipper (front to back) and an inner one below that. The inner zipper allows width-expansion of the bags, a feature that many riders might take advantage of, and we found no water on our goods after riding in a heavy rainfall with the outer zipper opened.

The sidestand on the Stryker is a feature worth mentioning. It’s long, and set at a high angle, so the bike seems to want to lie down and go to sleep when you set it on the stand. But it’s visible from the seat, and with the footpegs placed well ahead of it, there is nothing to interfere with its operation; short-legged riders will like this feature. And even though the Stryker leans over considerably on the stand, it’s easy to pick up by either a seated or a standing operator. We did not like the effect of the rake on turning radius, and found it a back-and-forth process to get the bike turned in a small space, but with sufficient ground clearance and solid, low-speed grunt, the Stryker will U-turn easily under power.

We were pleasantly surprised by Yamaha’s Stryker, which handles, runs, and looks like something that costs more than its actual price. We haven’t mentioned the pleasing sweep of exhaust or the lustrous quality of chrome and paint, but photographer Bill Petro noticed them, and so should you.