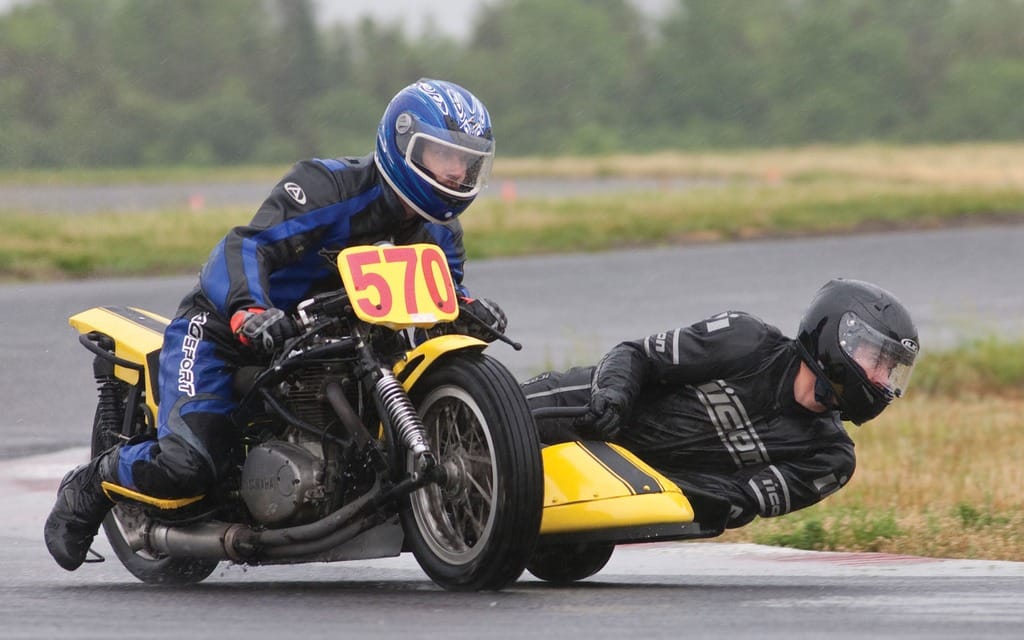 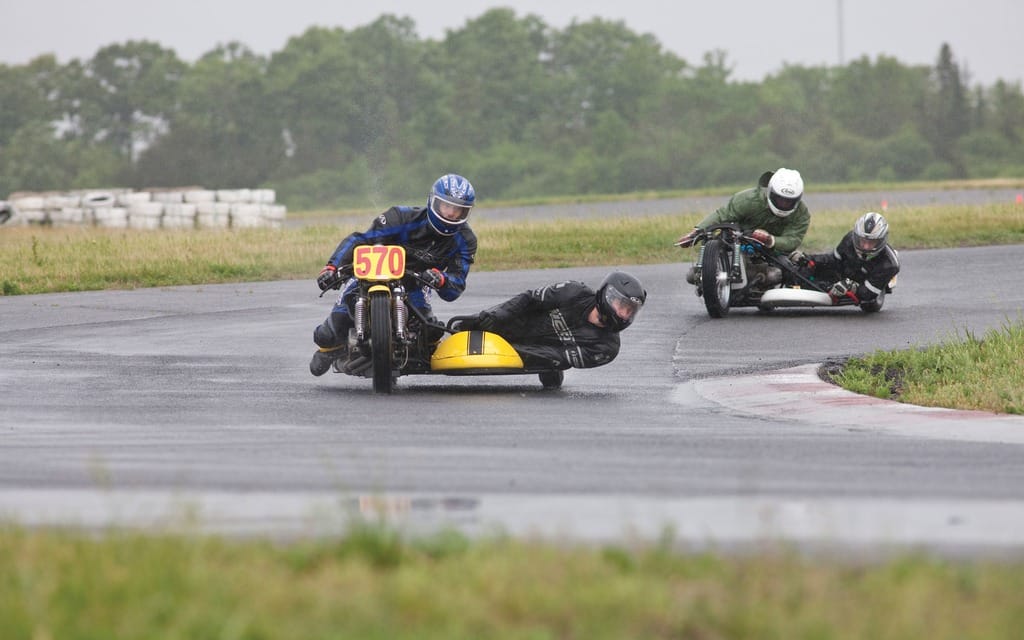 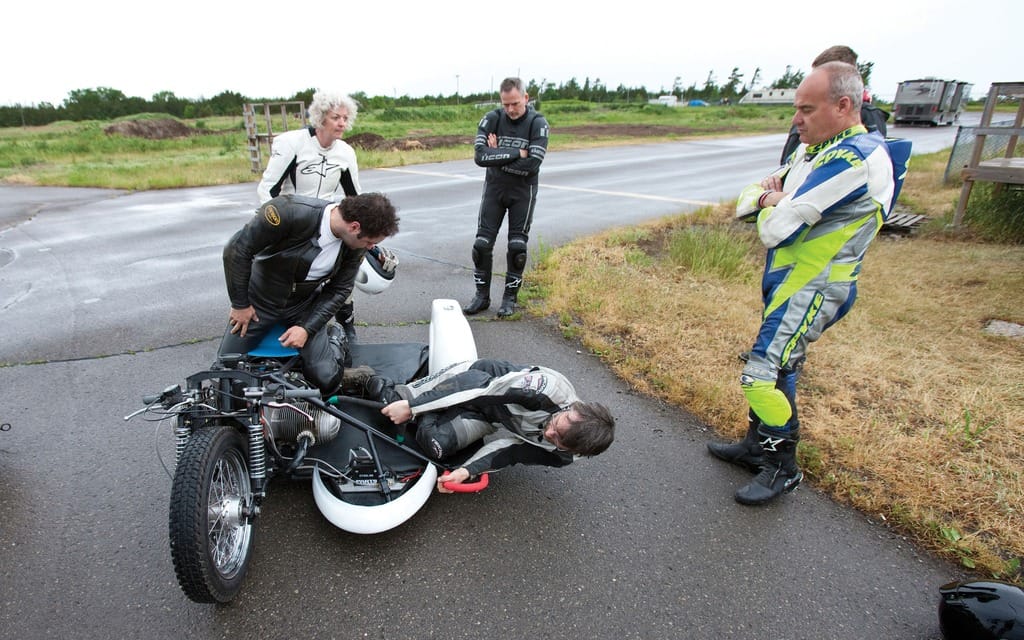 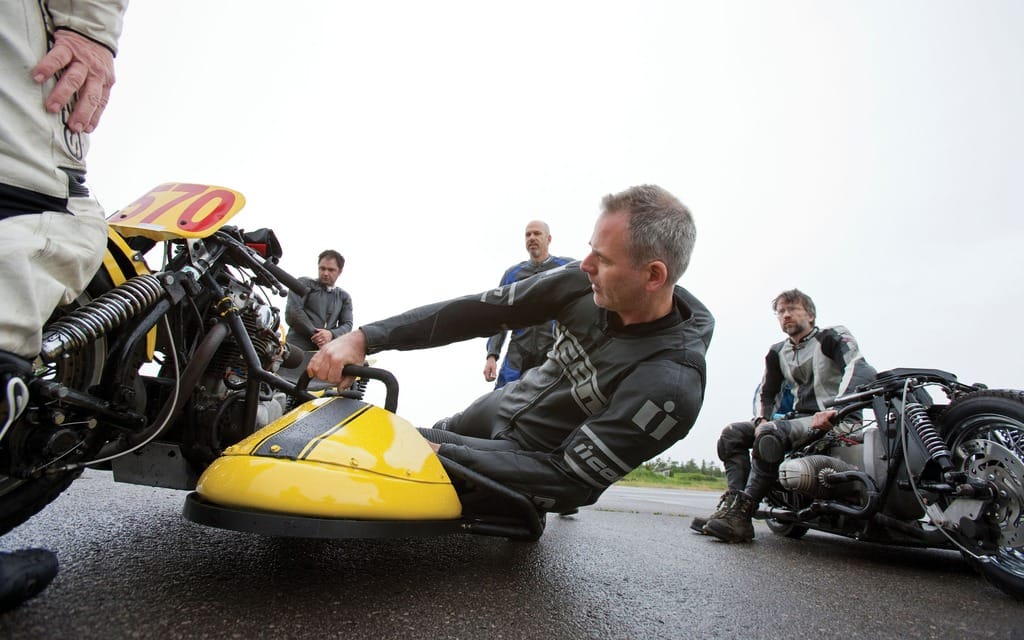 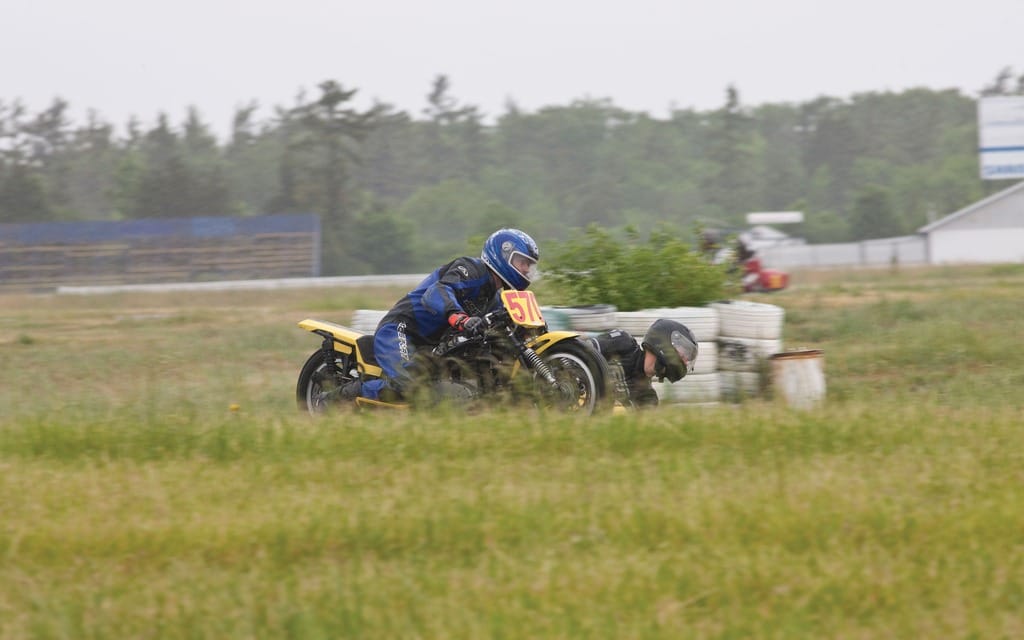 It’s three to get ready now go cat go as Neil Graham learns if he’s got what it takes to be a sidecar monkey.

My arms flail and my legs skitter across the sidecar platform — I’ve lost my grip. As my hands claw for the steel tubing that serves to brace the sidecar monkey against the rig’s forces, I feel as vulnerable as a man who’s discovered that the roller coaster he’s riding is without a seatbelt. I’ve only got a few seconds to brace for the next corner, because if my positioning is wrong and my hold’s weak, I’ll be catapulted into the weeds. And then I think: this is motorcycling?

The act of riding a motorcycle is graceful. Unlike a car, where cornering forces jar the body away from the direction of the turn, a motorcyclist absorbs cornering forces straight down the spine, in the way that a diver meets the water or a pilot banks into a turn. But this grace is absent from the sidecar rig. The driver is denied motorcycling’s black magic: counter-steering. Instead, he wrestles the handlebar of the beast into the direction that the rig is reluctant to turn, in the manner of a man trying to wrestle a cat into a bathtub full of soapy water. The situation is even sketchier for the sidecar monkey.

From a machine dynamics point of view, the monkey is nothing more than moveable ballast. The monkey flings his torso over the right rear of the machine behind the rider (like a person collapsing sideways onto a motorcycle) for right hand turns. For left hand turns, the monkey skitters inelegantly on his knees and elbows and belly to a place in front of the offside wheel. Once he’s arrived and braced himself, he leans out as far as prudence allows.

At the Vintage Road Racing Association’s sidecar school, I learn from instructors Janice and Malcom Lake and Dale Minnett that the tricky part isn’t assuming the position for left or right hand turns (I can hunker down and hold on as well as anyone), it’s getting between the two positions while stationed on a slippery steel platform skimming along the road’s surface.

Mantra for the sidecar monkey is to never let go. To transfer from the over-the-rear-wheel position for right hand turns to the forward-and-left position for left-handers involves a complicated ritual of pawing frame tubes and grabbing handles in a precisely choreographed manner. That is if you do it correctly. On the skidpad next to Shannonville’s road racing track, Dale Minnett drives in a large figure eight while I practise going from front to back. As soon as the rig moves, the handgrips that I had readily found while we were stationary all seem to have shifted positions. Instead of a methodical hand-over-hand transfer from front to back I collapse on the rig’s platform and flap like a fish adrift in the bottom of an aluminum fishing boat.

Minnett, who is driving a sidecar rig for only the second time (he’s a monkey himself who partners with driver Dave Minnett) is tolerant of my stumbling about and very politely points out that if I lean on this left leg he can’t shift gears. We’re horribly out of sync. (No, I’m horribly out of sync.) Because the skidpad is nothing more than a parking lot, I don’t know when he’s going to turn. I’ve also forgotten the shape of a figure eight. Once, he turns left while I’m hanging out to the right, and the sensation is reminiscent of leaning over the back of a sofa and feeling your top half outweigh your bottom half.

Janice Lake has been her husband’s monkey since 2008, though she likely wishes I worded that statement differently. Malcolm, who sells cars in Burlington, Ontario, began racing solo bikes with the VRRA but Janet, who tagged along to the races, was dying of boredom. Finally she convinced Malcolm to try driving a rig, though he previously had “absolutely no interest in trying one” according to Janice. But then the bug took hold. It is their fifth season partnering a rig, and I ask, nervously, if it’s safer than a solo motorcycle. You certainly can’t highside when you’re so close to the ground, can you? “No, you can,” says Malcolm flatly. “The wheel flips up and over you go.”

As we queue up on pit lane, for our first session on the racetrack proper, two men in their 20s look on from pit wall and smirk. Janice, a registered nurse who now works in administration, has told me that “people think you’re nuts, when they learn what you do.” I didn’t say so at the time but I’m one of those people. And now, as we leave pit lane and enter the track, I’m officially one of those people.

Minnett spins the Yamaha XS650-based rig up and the parallel twin digs in and around turn one. Complicating my day of learning has been a rainfall of biblical proportions. It is one of those days that you know will rain hard all day from the moment you wake. Ahead of us on the track are Janice and Malcolm, and when Janice moves into position, I do the same. Only Janice does it gracefully, like a woman who’s collapsed onto her kitchen floor so many times that she knows the precise order of first grabbing the table leg and then the chair seat and finally the countertop to hoist herself to her feet. I, on the other hand, am a drunk who’s collapsed onto the floor and am using tablecloths and the legs of my hosts to get from here to there.

Malcolm said that sidecar racing places incredible stresses on the rigs, and hearing the XS groan underneath nearly 400 pounds of combined rider weight, it is hardly a surprise to learn that clutches fade and tubes snap. In time Minnett and I find a sort of rhythm — a two-tall-white-guys sort of rhythm, but rhythm nonetheless. It had been stressed that we weren’t racing, but when a BMW boxer-powered rig shot past, Minnett wicked up the pace and I began to accurately hit my marks. Malcolm and Janet had said that the pleasure in sidecar racing comes from the feeling of working as a team, and where Minnett had, earlier in the day, looked for me on the rig like one might look for a ferret that had escaped its cage, now he was free to look where he was going.

And I, despite my initial reservations, am now a proponent of sidecar racing. For unlike sidecars for the street, where the passenger is rammed into a giant suppository where they sit in terror, the racing monkey has so much to do and so little time to transition from right to left and from left to right that there isn’t time to be terrified. Well, most of the time, anyway. The straightaway, in racing, is where you breathe, and regroup, but all I can think about is what the hell will happen if the contraption I’m on hydroplanes on the standing water and careens into the concrete barrier that lines the front straight. But despite a wiggle or two, and an occasional slide in a slick left hander, Minnett brings me back to pit lane safely.

Janice and Malcolm confess that this will likely be their last year competing. I ask Janet what she’ll miss. “I can tell you what I won’t miss,” she says. “Days like this, when it’s pouring and you’re stuck in Shannonville.” Then she thinks. “I’ll miss the people,” she says, “and turn two at Mosport. I love that corner.”

The VRRA’s sidecar school happens annually at the organization’s first race meeting of the year. Unlike the other schools that we’re featuring, it isn’t simply a pay-and-show-up arrangement (cost is $245, which includes VRRA membership) as the student is supposed to arrange a suitable rig to practice on. Despite these obstacles, the VRRA’s Dave Minnett (dhminnett@hotmail.com) is willing to help seriously curious fans of sidecar racing take the step into the saddle or onto the chair. I’m glad I did.