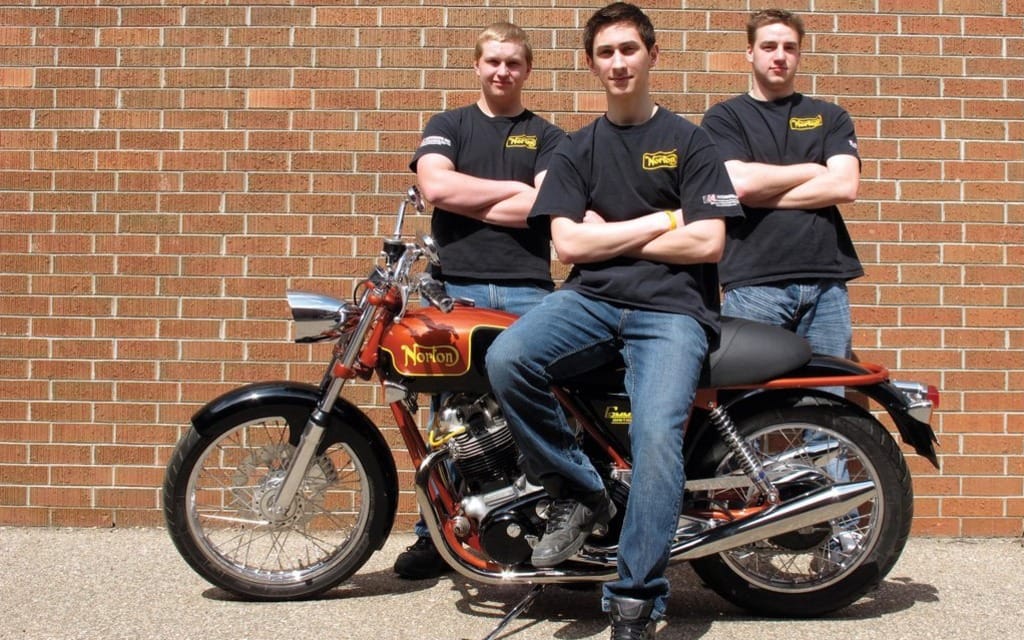 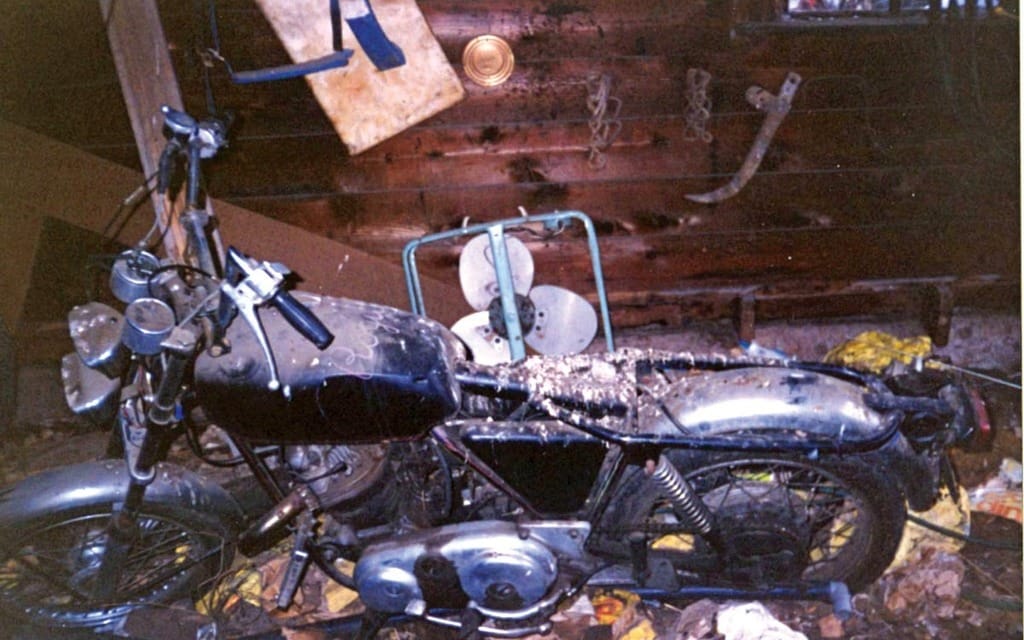 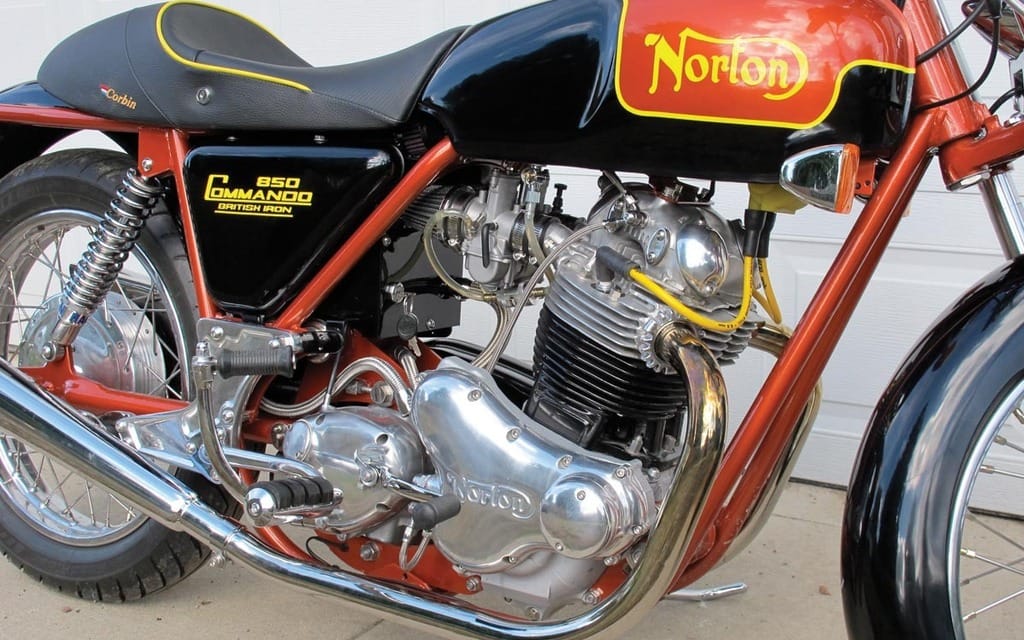 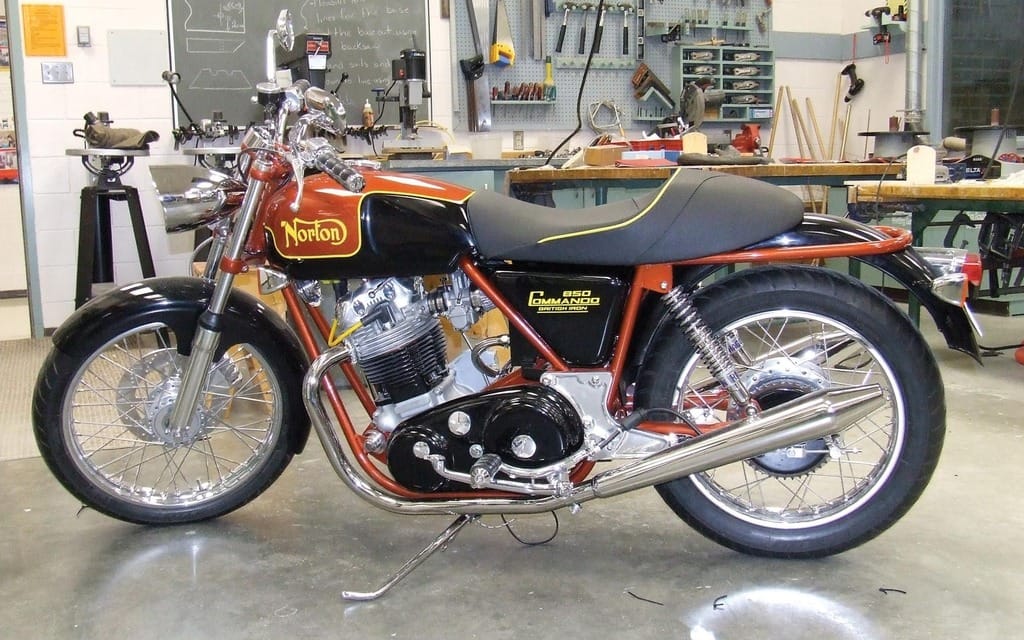 A broken down Norton makes a winning class project. And they say school is a waste of time.

Earlier this year, three students and a shop teacher rolled a Norton Commando out of the shop door at the Allan Composite School in central Saskatchewan and prepared to start it for the first time in about 30 years. It was a critical moment, and not just for the two years of work they had poured into the project. There was money resting on the number of kicks it would take to get the Commando running.

It was an unusual class project for Brian Clarke, an industrial arts teacher, and an even stranger challenge for his three students, Hayden Fusick, Casey Fitzsimmons, and Stephen Lubovicki, who had been given a box of Norton parts the year before and told to make them run. At the time, they didn’t know what a Norton was, or in which direction it would run.

The three students were enrolled in Clarke’s grade 10 class in 2010, taking welding and small engine repair.  As the school year ended, Clarke asked if, when they returned the following year, they might be interested in resurrecting a derelict Norton Commando.

“All I knew, it was a motorcycle,” Fusick said. “I had no in-depth knowledge, and the only motorcycles I knew about were Harley-Davidsons. I had no idea what a British bike was, but I was excited about the project.”

Clarke was 11 when his brother wheeled the Norton onto the family farm at Shell Lake, Saskatchewan. The 850 Commando was nothing more than a butchered chopper. With a raked frame,six-inch over forks, high-rise ape hanging Z-bar, twin rectangular headlights and crossover exhaust, the Norton was hardly fit for its Easy Rider close up. Worst of all, the motorcycle would not run properly, so in 1980 it rolled into a shed and was forgotten.

Except by Clarke. Fourteen years later, he badgered his brother into selling him the carcass, and he dragged the guano-encrusted bones back into daylight. But its reprieve was short lived; Clarke quickly disassembled the Norton and put it into storage.

In the fall of 2010, he showed up for work at the Allan Composite School shop class weighted down with Norton parts. The frame’s neck had been cut and rewelded poorly, so Clarke hoped to build a new custom frame and then turn the Commando into the chopper its previous builder might have wished for. However, concerned that the Saskatchewan government might refuse to register a homebuilt motorcycle, he changed direction.

“Being paranoid, I phoned Saskatchewan insurance and they told me they wouldn’t plate a homebuilt frame,” Clarke said. “That might not have been true, but I wasn’t willing to risk it.”
He approached John Oland of Motoparts in Edmonton, who sold him a straight 1970 Commando frame. Canadian Brit-bike suppliers Walridge Motors and British Cycle Supply also backed the school build.

With the replacement frame in the shop, Clarke and the students mocked up the Commando in the style of a Colorado Norton Works machine.

Both Fusick and Fitzsimmons live in the town of Allan, population approximately 630. Fitzsimmons said he’d ridden dirt bikes and knew about Kawasakis, Suzukis, and Hondas, but had never heard of a Norton. “I had no clue, but I was eager to get working on the bike. I’d always watched my dad fix things, and I took in as much as I could but I’d never had much opportunity to really get my hands dirty. I’d changed oil in a car, but not much more.”

Fitzsimmons cleaned and polished the front hub and installed bearings, and was then handed a new rim and spokes and told to learn the black art of wheel building.

“I put all of the spokes in the hub, and just figured out the pattern,” Fitzsimmons said. “I looked at the spoke heads, and how they fit in the hub, and the angles of the holes drilled in the rim. It was a big puzzle, but I like problem solving and figuring things out. I really enjoyed that — even if it did take me a couple of weeks to work through it with some trial and error.

“If I was struggling, Mr. Clarke would give me a bit of a boost.”

Clarke himself had never laced a wheel before. To be sure he understood the concept, he’d previously spoked the wheel and taken it apart. Lubovicki was offered the same challenge with the rear wheel, and the students built and trued both to within .02 inch. Clarke tweaked them to .005 inch.

Fusick took a lead role with the fork, sanding and polishing the lowers and rebuilding with 1.5-inch undersize stanchions to match the shorter Hagon rear shocks. Fusick and Fitzsimmons spent hours encouraging reproduction parts to fit, including a new front fender, a Triumph rear fender, and an aftermarket handlebar with concealed wires. By the end of the first year the gearbox, which came from a 1972 Commando, had been rebuilt and placed in the frame, and the front and rear wheels were hung. The Norton waited for their return in grade 12.

Lubovicki lives on a farm just outside of Allan, and had previously rebuilt a GM 350 with his Dad, so was aware of an engine’s internal intricacies. To gain a better understanding of the 1973 Norton 850 Commando engine he watched Mick Hemmings’s Norton rebuild videos. “The Norton motor was all in boxes, and there were some pieces missing,” he said. “But, I started with the crank, cleaning it up along with the cases.”

Clarke oversaw the process, and Lubovicki installed bearings, shimmed crank end play, fit the oil pump, and buttoned up the top end. Overall, he spent a month and a half on the engine. “It was a tremendous amount of responsibility,” he said. “I liked how simple yet well-made the engine was.”

Mock-up was finished early in 2012, and the Norton came apart for finishing. Clarke was learning just as much as his students. He’d never painted with a compressor and spray gun before, but taught himself when he primed and finished the frame so they could start hanging parts. Then, each student took ownership of individual components, stripping, filling, sanding, priming, painting and clear-coating the parts. Fusick took on the gas tank, Fitzsimmons, the front fender, and Lubovicki, the rear fender and side panels.

They claim the Norton went back together easily, with little fuss, thanks to the care and attention originally paid to ensure that everything fit. With a wiring harness installed and fuel and oil in the tanks, the Norton rolled onto a concrete pad outside the shop doors. Each member of the team had a buck riding on the number of kicks it would take to bring the 850 Commando to life. Clarke bet on two, but Fusick pocketed the whole $4 when the Norton started on the third kick.

None of the students, who are all 18 now, was a motorcycle enthusiast before working with Clarke and his Norton. They all said they wouldn’t immediately rush out to buy a bike, but their flint financial status might have influenced that decision. The project has, however, had an impact.

“The biggest lesson I learned is that I can do something like this,” Fusick said. “It could be a truck or a motorcycle, but I’d feel confident taking it apart and putting it back together.” Fusick plans to attend the University of Saskatchewan, and would like to eventually teach history and biology.

Lubovicki has a job lined up in an Allan tractor-wrecking yard and plans to further his horizons in a year, eventually enrolling in a heavy-duty mechanics course, but he was satisfied with the results of their unusual class project. “I did like the sound of the Norton when it started. It was different than anything else I’d ever heard.”

Fitzsimmons is thinking of entering the trades — sheet metal and steel fabrication, perhaps — and wants to attend the Saskatchewan Institute of Applied Science and Technology. It was Fitzsimmons who was most affected by the Norton project, which has now covered 100 break-in miles. “When the Norton started for the first time, that was one of the best feelings I’ve ever had in my life. All of those bits and pieces came together and became a running, functioning motorcycle. We did that.”