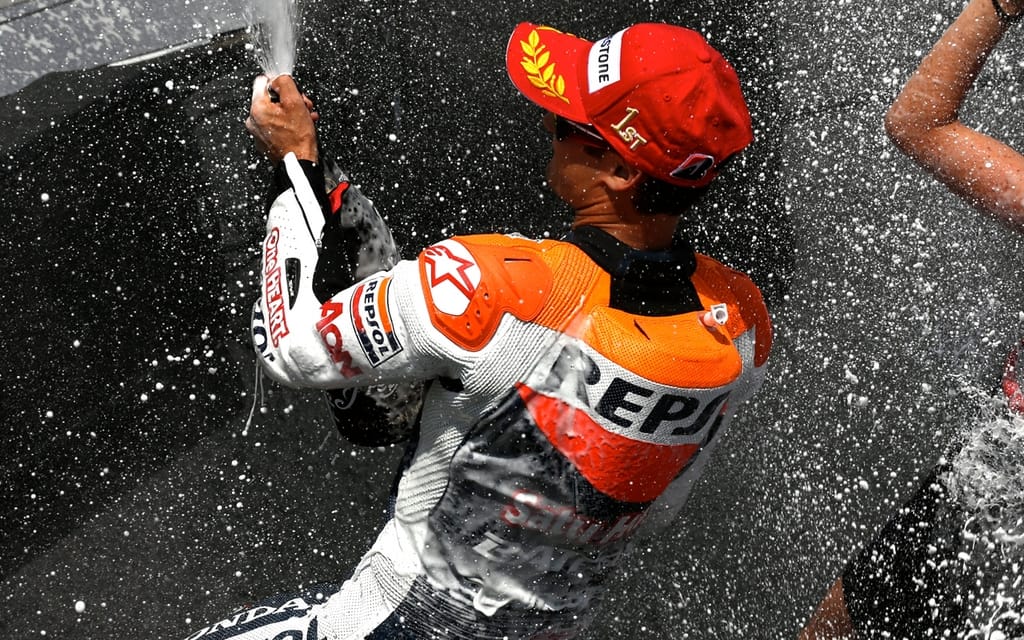 Dani Pedrosa won Sunday’s MotoGP at Indianapolis from the pole. His only challenge was an early charge form Ben Spies and Pedrosa is now the first racer to repeat as winner at the Indianapolis MotoGP event.

Jorge Lorenzo trailed Pedrosa by a large margin to capture second. Andrea Dovizioso followed Casey Stoner for most of the race before getting by in the late stages to come home third.

Stoner, who was injured in qualifying Saturday, mounted his machine before the race from a pair of crutches and could be seen collapsing forward on the bike after stopping on the pits at the end of the race. His fourth place finish counts as heroic, given the torn ligaments and fractured bones in his right ankle.

Valentino Rossi ran a lonely race and rarely had sight of another rider all afternoon.  Climbing from the eleventh place on the grid to his seventh place finish was due mostly to attrition of riders ahead of him.

The crowd cheered as Ben Spies got to the first corner off the start ahead of Dani Pedrosa and took the lead. Spies provided, arguably, the only excitement of the race as his engine failed spectacularly down the front straight, ending his day.

American Nicky Hayden sat out the race with a concussion and broken bones in his right hand suffered in a qualifying crash.

Forty year-old American, Steve Rapp rode a wild-card entry from the Attack team. His fourteenth place finish netted him two championship points, making him the oldest rider to do so in MotoGP.

Brno in the Czech Republic hosts the next MotoGP round next weekend.