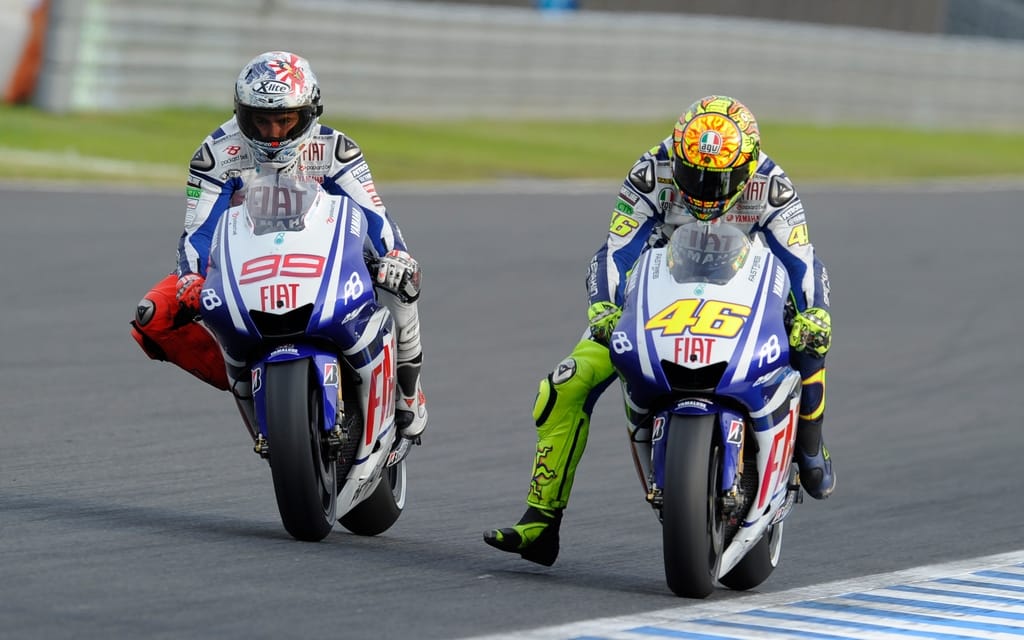 Rossi and the Silly Season

Valentino Rossi appears set to move to Yamaha from Ducati at the end of the 2012 season. Reports in the Italian press indicate an announcement will come on August 15th, ahead of the Indianapolis MotoGP round. The decision seems to have been cemented after a frustrating weekend at Laguna Seca that saw Rossi slow in practice, start from 10th place on the grid and end with a crash at the top of the Corkscrew.

The move to Yamaha would put him in a more competitive position, but is likely to see him take a pay cut. The Yamaha offer is rumoured to be in the €3 – 4 million range.  Moving to Yamaha would see Rossi race the MotoGP bike for 2013 and help develop the YZF-R1 for a return to World Superbike in 2014. It would also put him as the number two rider in the Yamaha garage to Jorge Lorenzo. What is not guaranteed is the ability for Rossi to bring his crew with him. Staying at Ducati would allow him to keep his team together.

Rossi has spoken to Ducati and there are reports that an offer of €12 million may be on the table for an undisclosed term. Ducati is now the property of Audi and could conceivably benefit from Audi’s engineering might. Rossi will be 34 years old at the beginning of the 2013 season and cannot wait for Ducati to develop a winning bike; the time has to be now.

Ben Spies announced at the end of July that he would leave Yamaha at the end of the 2012 season. His move would open up the spot as Lorenzo’s team-mate in the Yamaha garage. Reports are now circulating that Spies has inked a two-year deal to campaign a factory BMW in World Superbike, although there has been no official confirmation to this time.

Andrea Dovizioso has turned in a strong effort for Tech 3 Yamaha this season and sits fourth overall, the top satellite rider. Dovizioso clearly had his eye on the factory bike but he would obviously be displaced by Rossi. Nicky Hayden has already signed on with Ducati for 2013 and there are rumblings that if there is an empty seat next to Hayden, Cal Crutchlow is the odds-on favourite to fill it.

The silly season is in full swing and rumours and speculation will be plentiful until the Rossi announcement. Then the only entertainment in MotoGP will be the motorcycle racing.