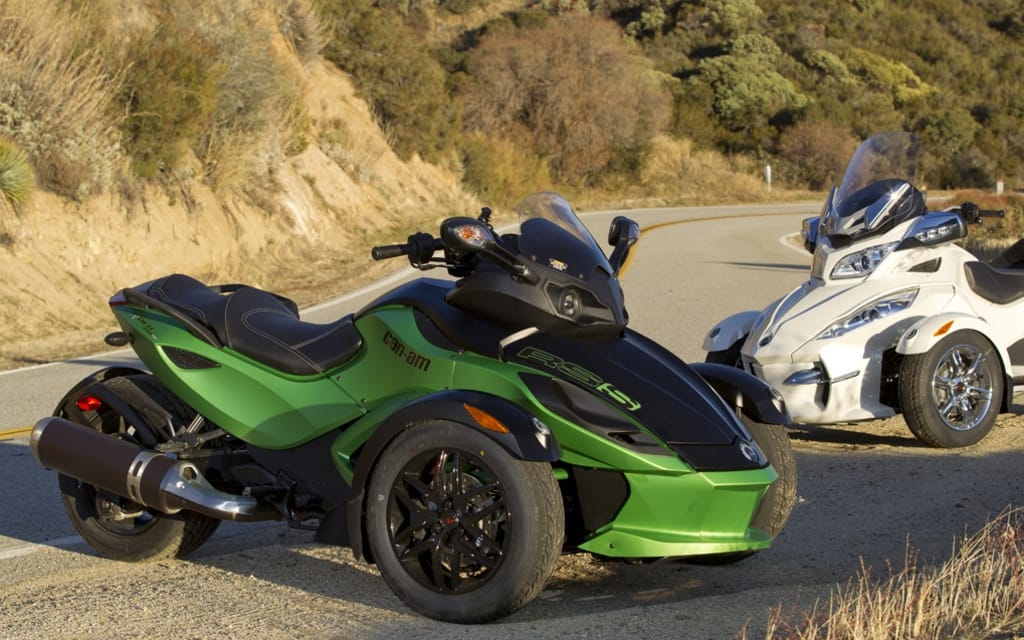 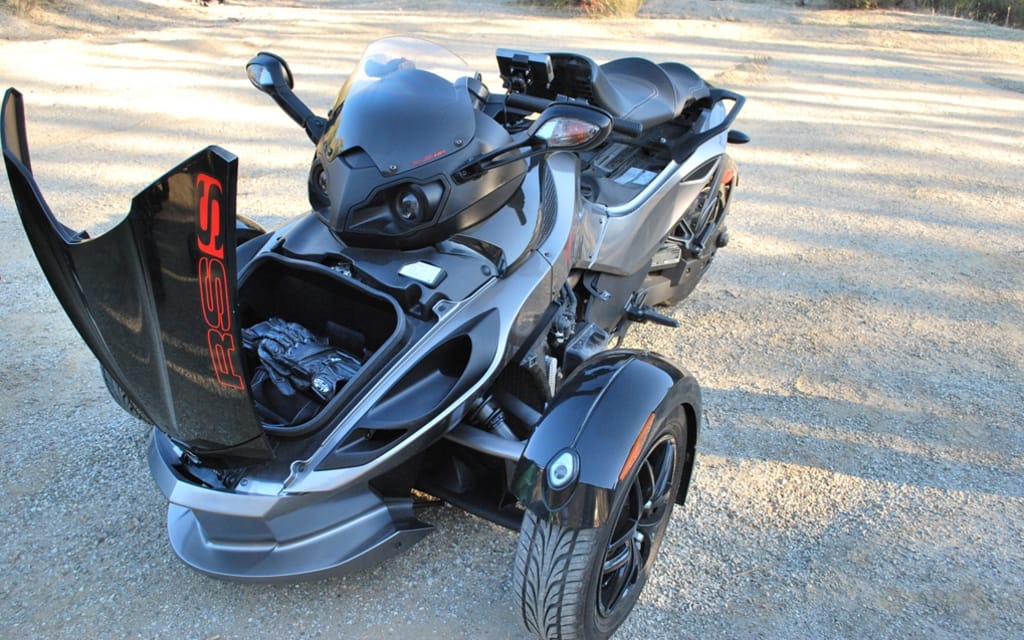 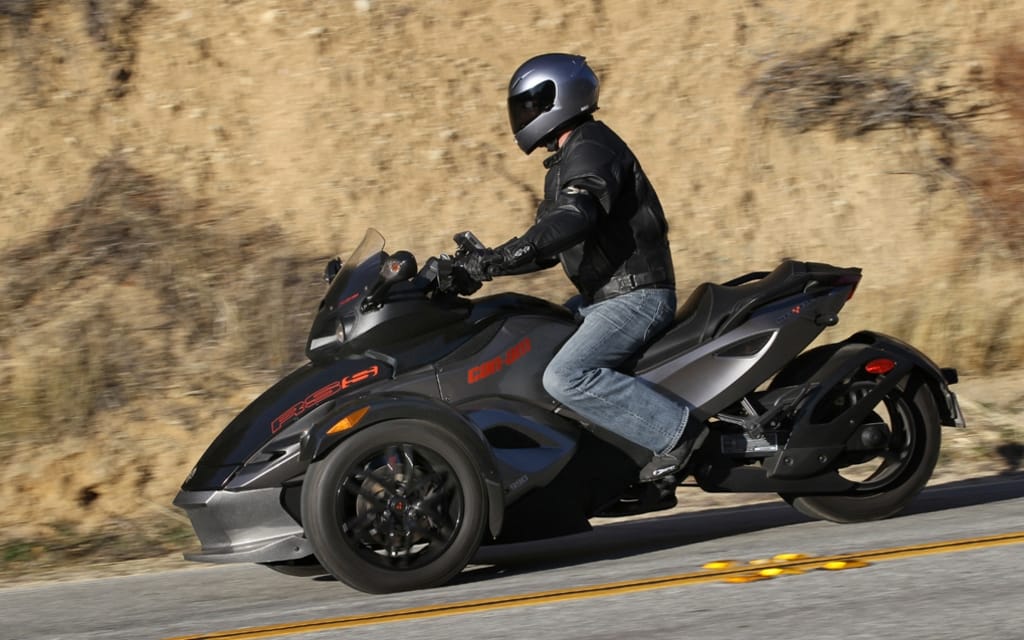 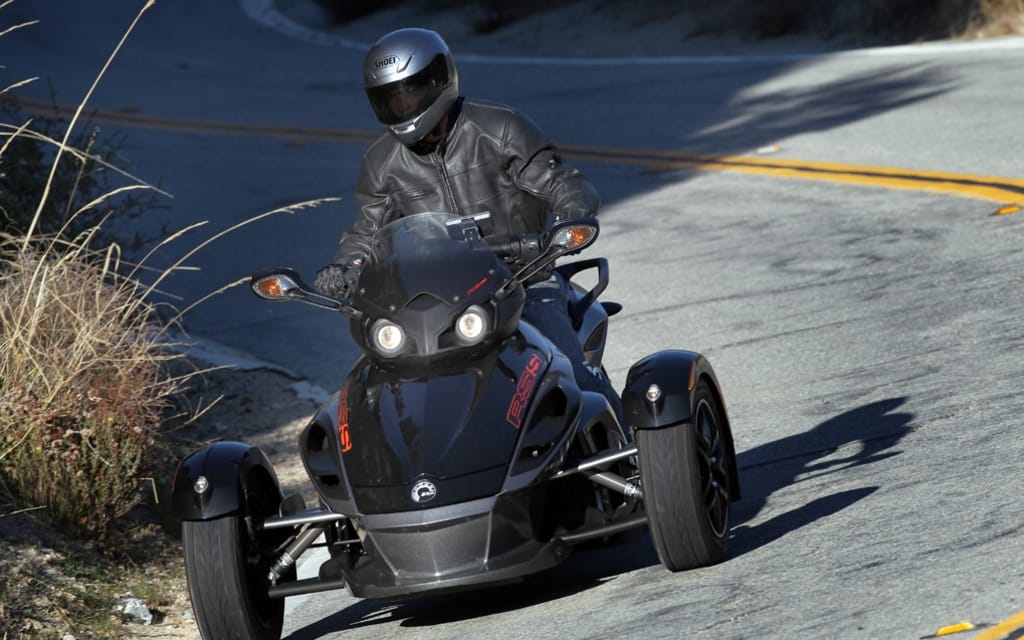 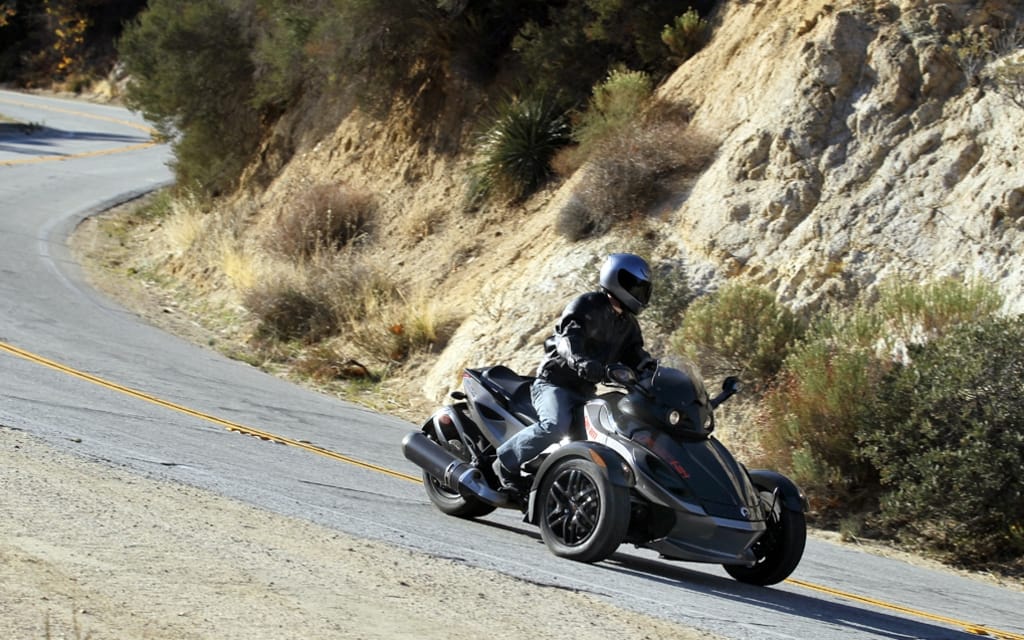 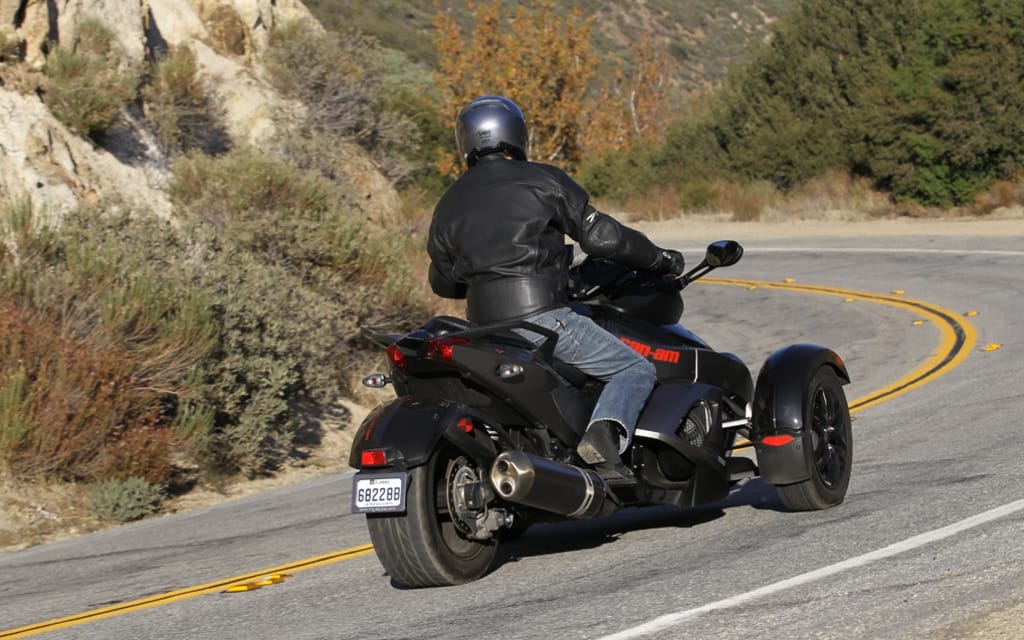 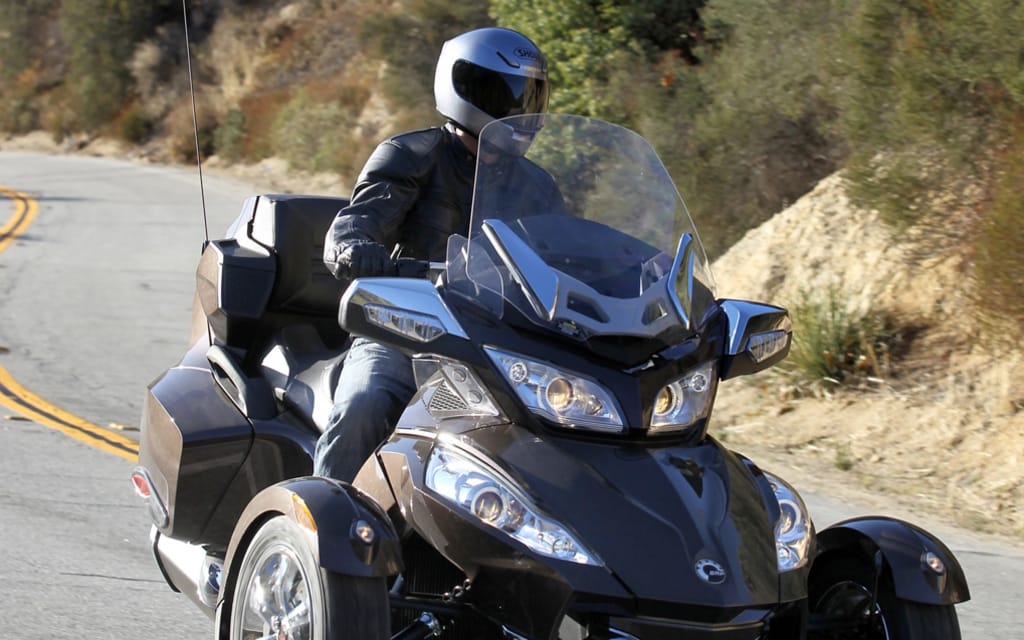 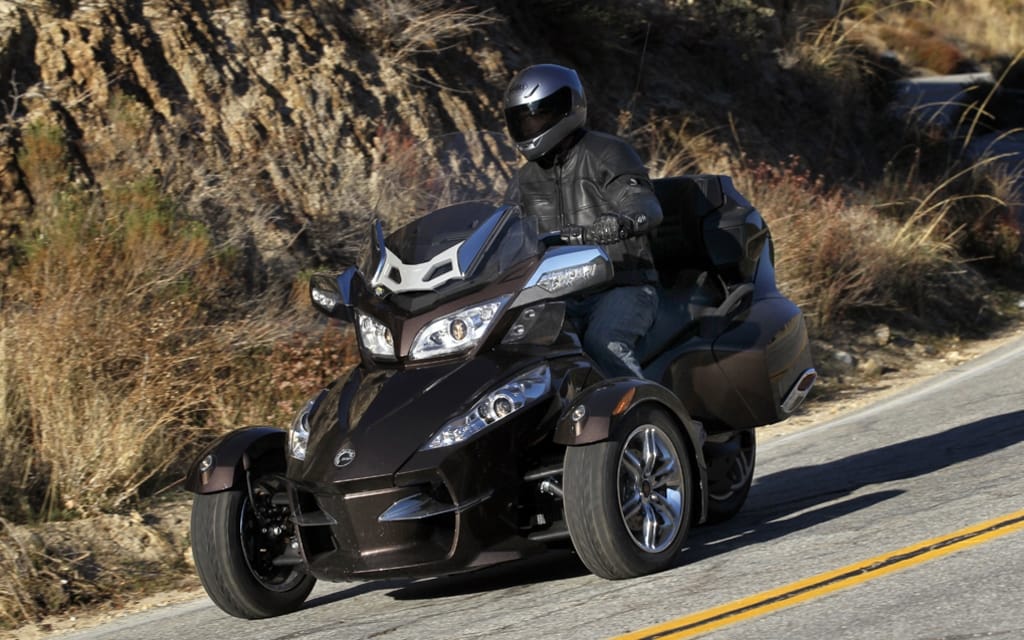 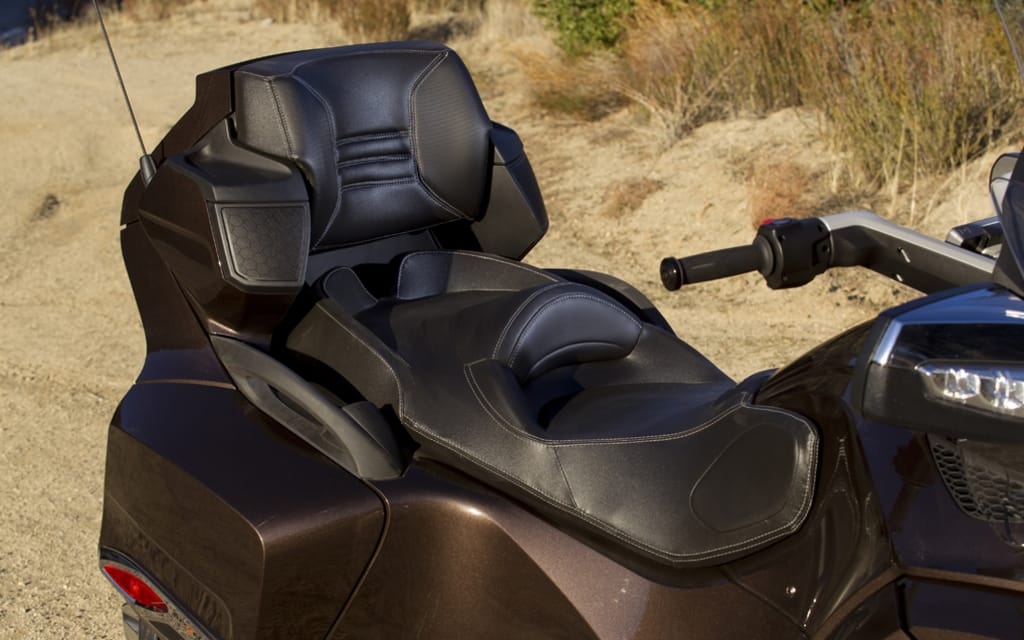 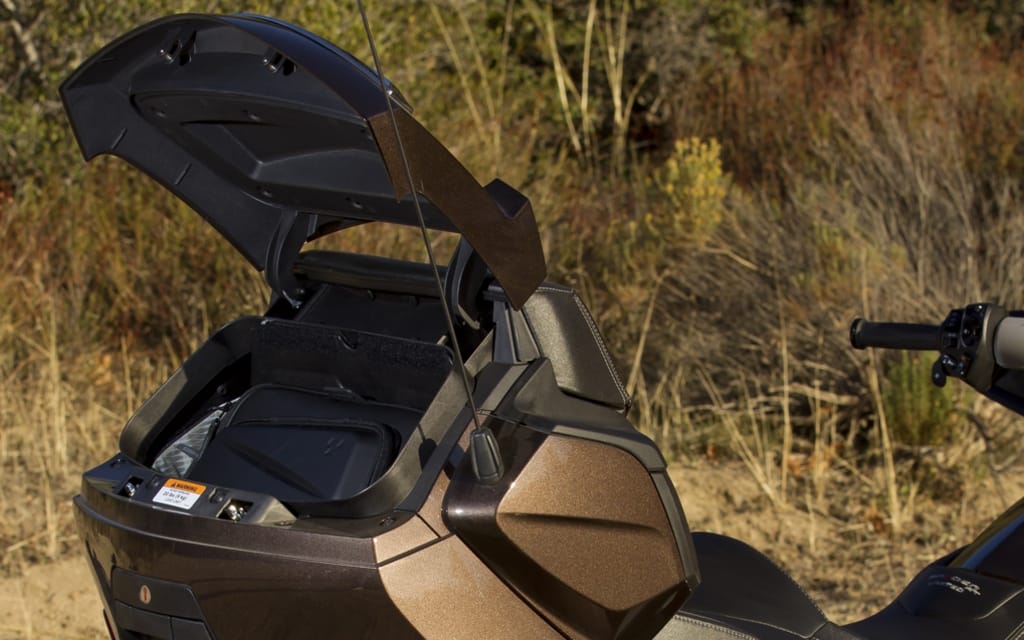 The Hollywood United Methodist Church, on Franklin Avenue in West Hollywood, is a beautiful gleaming white concrete structure in the English Gothic style. It has 50,000 pieces of stained glass. South of the church along Highland Avenue is Ripley’s Believe It or Not museum (easy to spot, as it has a dinosaur with a clock in its mouth on the roof). In the surrounding neighbourhood hacienda-style houses with deeply shaded porches, tile roofs, and stucco exteriors sit next to asymmetrical mock Tudor homes with timbered second stories and clapboard New England-style bungalows. Everything is at odds with everything else. It’s a fitting setting in which to ride BRP’s 2012 Can-Am Spyder lineup, as the two-front-wheels, one rear-wheel architecture of the RS and RT models is different from almost anything else on the road.

On a warm, clear California morning, we start with a briefing in an underground parking lot surrounded by both versions of the Spyder — the sporty RS and the touring RT. We’ve covered the ins and outs of the Spyder’s Vehicle Stability System in the past (comprising ABS, stability control, traction control and other electronic minders to keep you on the pavement and out of the sticks) so I’ll just give you the lowdown on the sleds and hit the road.

The RS model comes in two equipment levels: The base RS ($18,499) adds black to last year’s pearl white and the three-spoke wheels are shiny. The RS-S ($20,299) blacks out six-spoke wheels, adds a Fox shock, and comes in colours that marketing people would probably describe as “edgy”: green with satin black, red with satin black, or metallic grey with metallic black. If you’re more into luxury than sport, then you’re an RT ($24,399) rider. You shift the gears on the base model but as the specification rises so do the standard fitments and options. The audio and convenience package adds a stereo with iPod capability and the SE5 clutchless transmission is a $1,600 option. The RT-S adds  fog lights, chrome trim, and charcoal coloured wheels. The everything-butflush-toilets RT Limited ($31,999) has an embroidered tan seat and a travel cover in addition to the SE5 transmission. All models (RS and RT) receive the updated amber-coloured LCD dash display for better visibility at night.

Before leaving the garage I select in the preprogrammed Garmin Zumo 660 GPS ($1,149.99) a tinny synthesized voice that replicates an Australian woman’s accent. On the highway it strikes me that following a Spyder is like trailing a Gold Wing fitted with a snowplough.Turning off the freeway, we head toward the canyons. At a rest stop we are given the option of staying with the guide or following the GPS to the photographer. Not wanting to ride a wide machine on a narrow road in a large group, I head off by myself.

Alone on Little Tujunga Canyon Road, riding an RS-S, I drink in the cool mountain air. An hour later I merge onto the Golden State Freeway with a sinking feeling in my stomach. I have been following the GPS but I know I’m lost: the twisty roads I was promised are gone. I’m hemmed in by trucks and choked by a battered Volvo wagon without piston rings. My stomach has formed into a tight knot. A motorcycle magazine story can’t run without photographs: Cycle Canada  isn’t the New Yorker . Getting lost means missing the photo session. The story would be dead. As would I: Neil Graham knows where I live.

Choosing an Australian accent for the GPS voice seemed funny at the time, but now she’s mocking me in an artificial short-vowel twang. Back on the freeway in the opposite direction I miss another off ramp. Another U-turn and I recognize the name of a surface road — I had been on it before during a previous U-turn. Now I’m back where the group initially split. I feel nauseous. I’m no longer lost, just horribly late. I charge up the canyon road, again, determined to save this story and my ass.

Having ridden up Little Tujunga Canyon Road once before and wanting to make up lost time, I pick up the pace from my previous pass. Although theVehicle Stability System can’t be turned off, it’s easy to turn it on. Running the RS-S hard into a corner, the throttle can be held open and the software takes over. When I realize nothing terrible will happen, I wick it up. (None so free as he who has nothing to lose.) Aggressiveness  yields entertaining results. The engine takes on a low moan, like an intake howl, as the ignition is cut. The rear tire howls and slides and then chirps as the brakes are automatically applied. If corner entry speed is too fast, the inside tire lifts off the ground but the VSS applies brake force to the outside tire, making it shriek and plunking the lifted tire back down. With the machine’s limits established, I work on smooth entries that don’t (noticeably) trigger the VSS.

Common to both models is the Rotax 998 cc 60-degree V-twin. In the  RS-S it’s tuned for a claimed 106 horsepower at 8,500 rpm with 77 lb-ft of torque at 6,250 rpm. The RT claims 100 horsepower at 7,500 rpm and 80 lb-ft of torque at 5,000 rpm. Most test machines are the electronically shifted SE5 version. The left handlebar shifter paddle goes up through the gearbox with the thumb and down with the forefinger. Shifts are smooth and seamless and the SE5 downshifts automatically if the rider gets lazy. But why not a fully automatic gearbox?Automotive-style one-right-foot pedal braking is strong, as you would expect from a machine with three large rubber contact patches.

Spyder handling is difficult to describe in motorcycling terms. Steering requires upper body strength; the most effective cornering method is to lock the elbow of the outside arm and use it as a fulcrum to pull in on the inside handlebar end. The steering seems twitchy at first, but changing your brain setting from “counter-steer” to “steer” fixes the problem.

Back on track and warily following the instructions from the GPS, I find  myself heading up Soledad Canyon Road. Less twisty than Little Tujunga Canyon Road, it allows a better chance to enjoy the mountain scenery as the road curves past ranches with names like The Pitchfork, The Diamond and Paradise Acres. The scenery I most want to see — the photographer — never appears.

When we left the city, the air temperature reading on the dash was 20 degrees. Now it’s 13 degrees and my  hands are like wax and the Spyder is nearly out of gas. The support truck in the parking lot next to the lake is a welcome sight, and I learn that an error in the GPS programming has led many of us off course. The photography session is rescheduled, after lunch. My stomach relaxes: I have a story and I will live.

In contrast to my fast-paced, gutwrenching morning on the RS-S, the afternoon on an RT-Limited is positively relaxing. In place of the forward-leaning riding position of the RS, the RT has a tourer’s sit-up-and-beg stance. Although  they share a common frame, differences in the front suspension make the RT three inches wider than the RS and, at 421 kg, it’s 104 kg heavier. More sculpted (and with a small step at the rear for back support) the seat on the RT is all-day comfortable. Passenger accommodations are in keeping with the luxury-touring theme; height-adjustable floorboards, heated grab rails, and a wide, sculpted seat with padded backrest. This could mean peace  in the family. The typical Spyder owner, we learn, is a male in the middle part of his life and the fat part of his earning curve seeking the motorcycle experience but with the peace of mind that comes from three firmly grounded wheels.

The Spyder is well equipped and well sorted; fit and finish are excellent and gone are the software glitches that plagued my ride at an earlier launch. And once motorcycle habits and skills are shelved, the Spyder becomes fun to ride and enjoyable in its own right. It isn’t a motorcycle and to judge it as one misses the point. And what is the point? To get outside and away from cell phones and to get a bug or two in the face. Any motorcyclist can understand that much, even if they’re slightly baffled by the idea of three wheels.