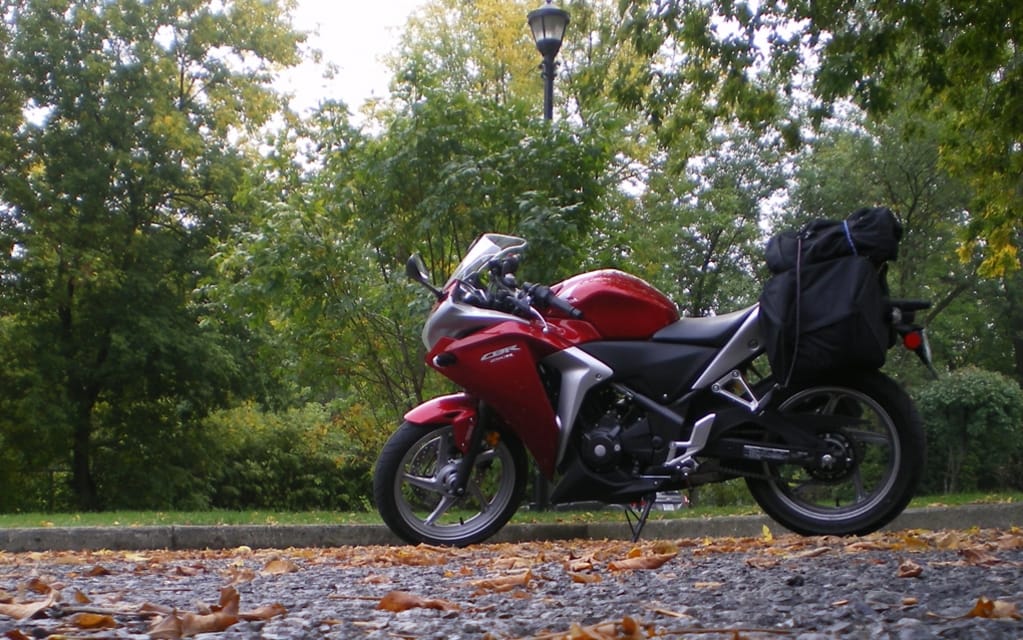 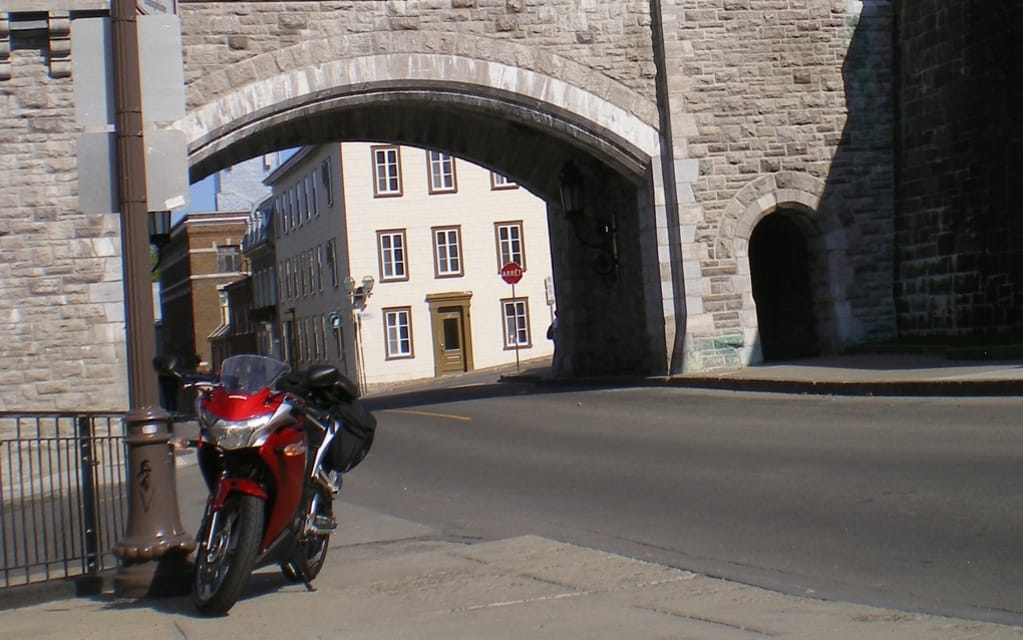 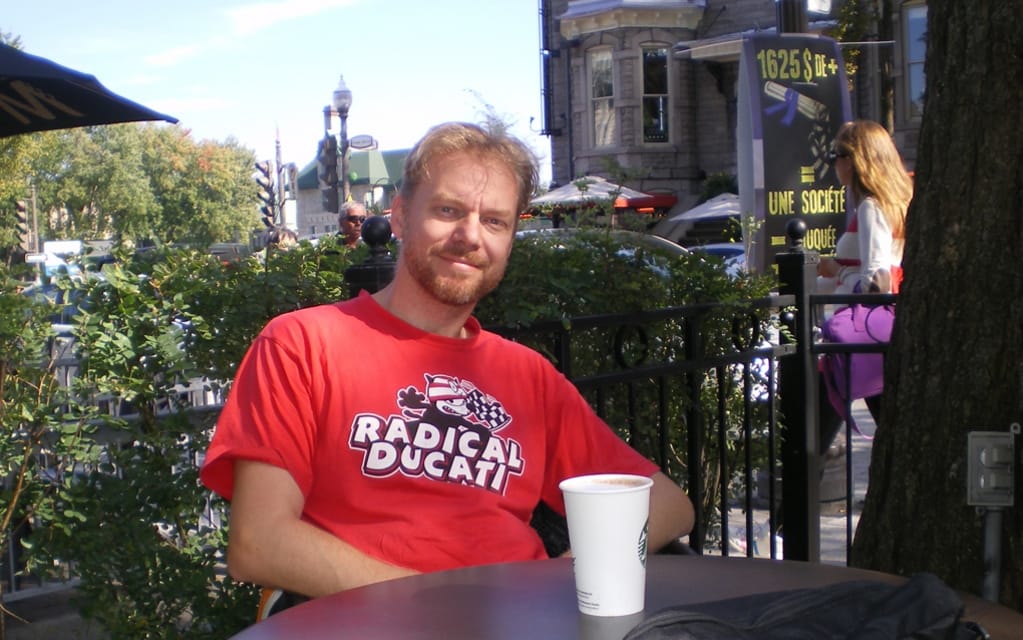 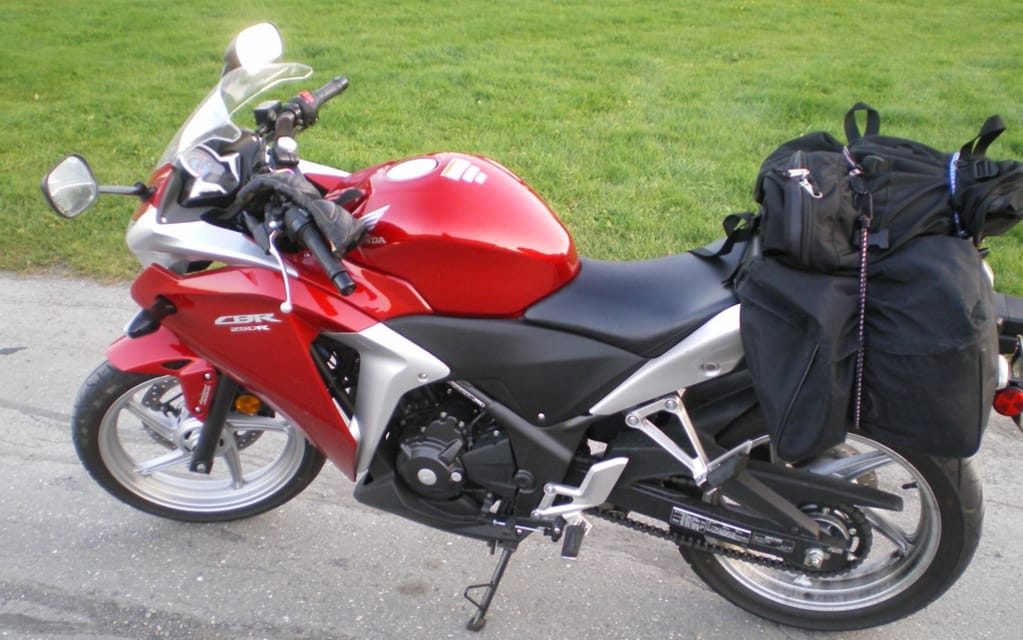 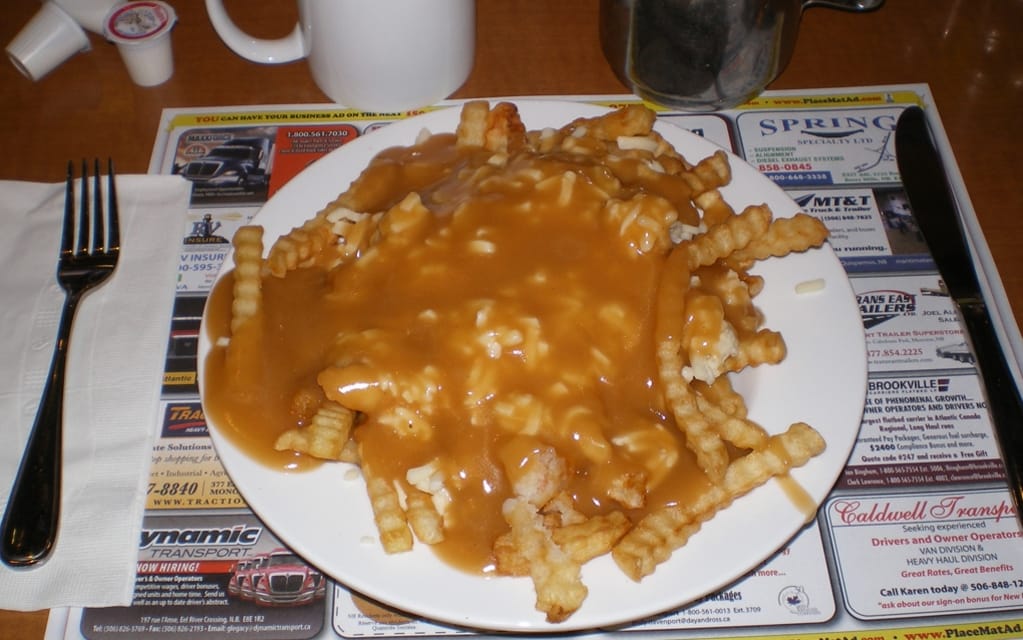 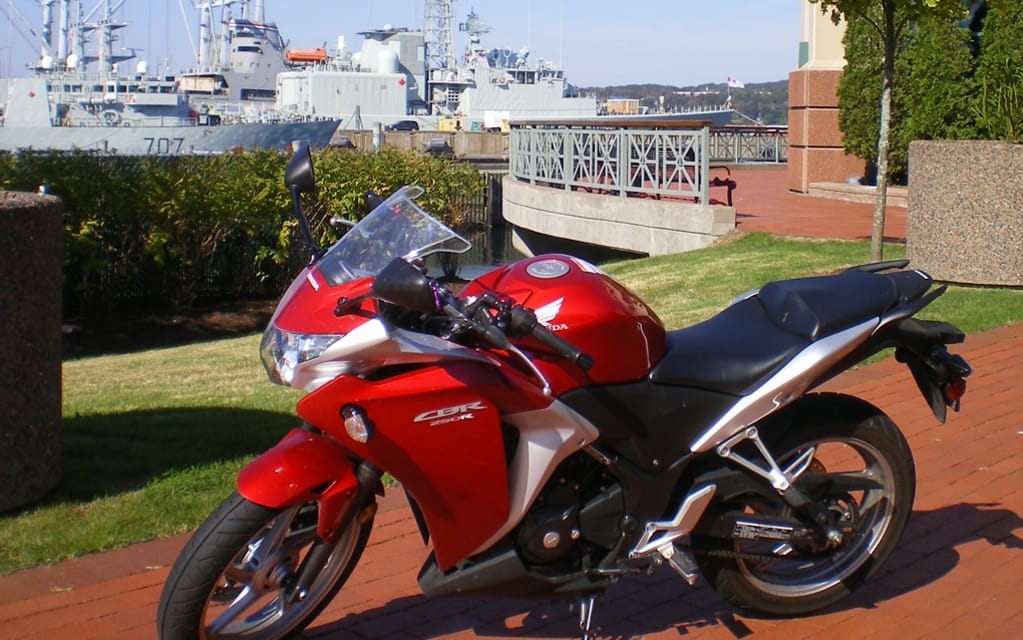 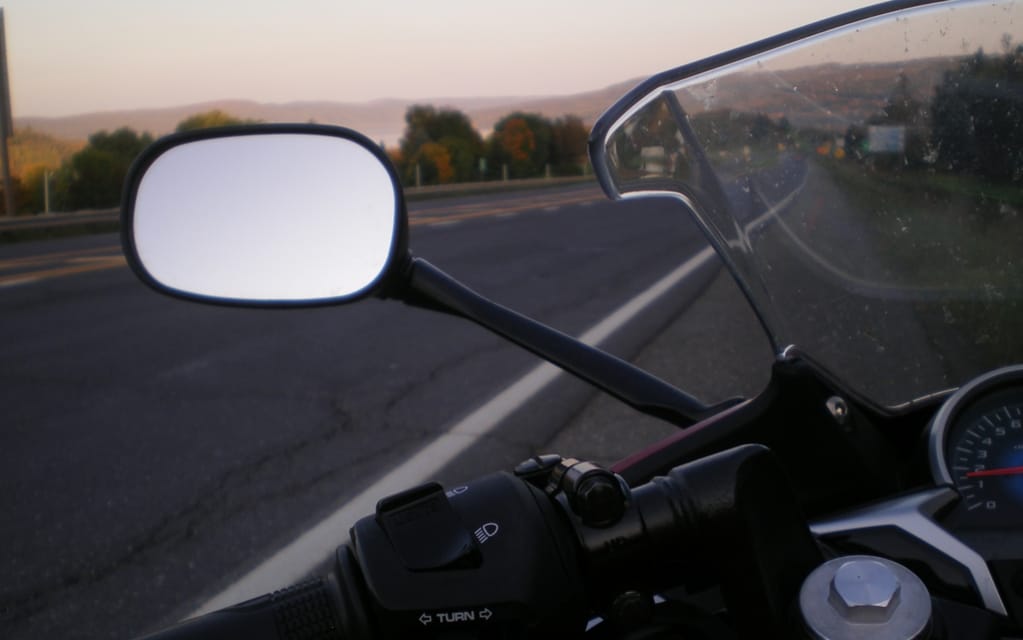 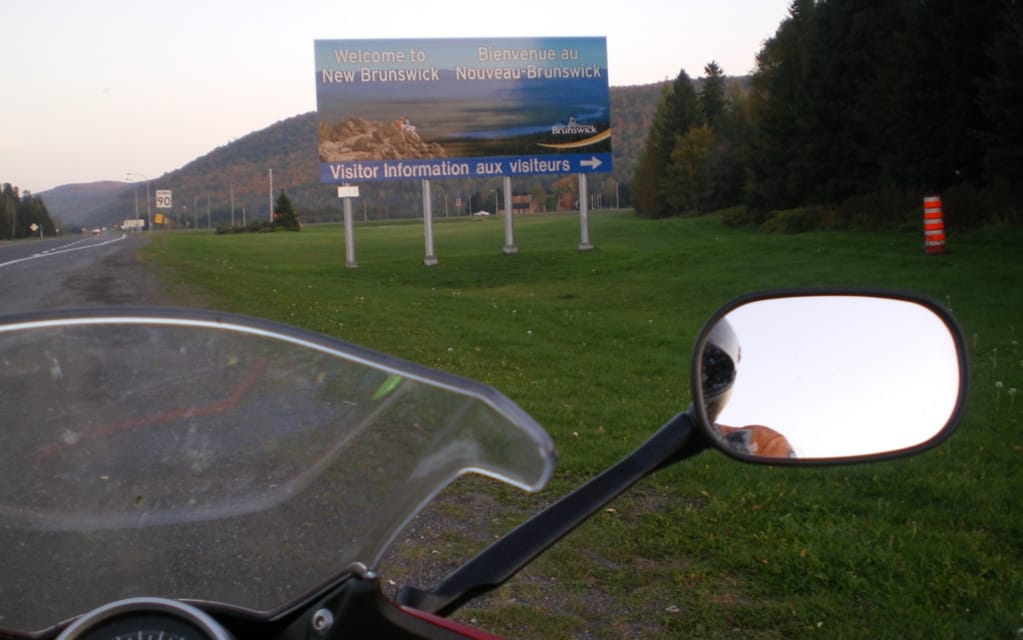 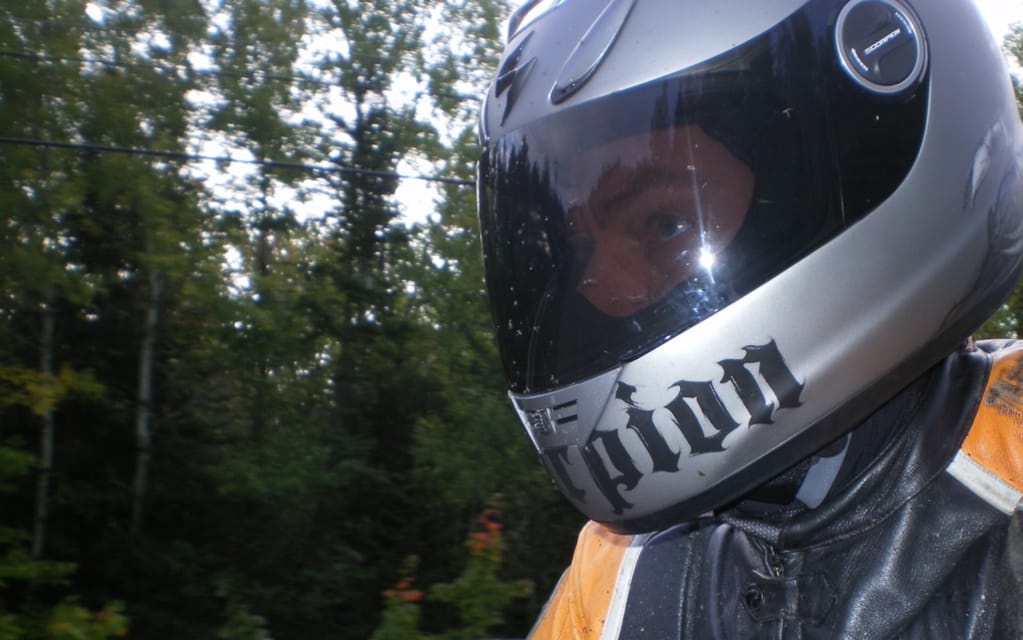 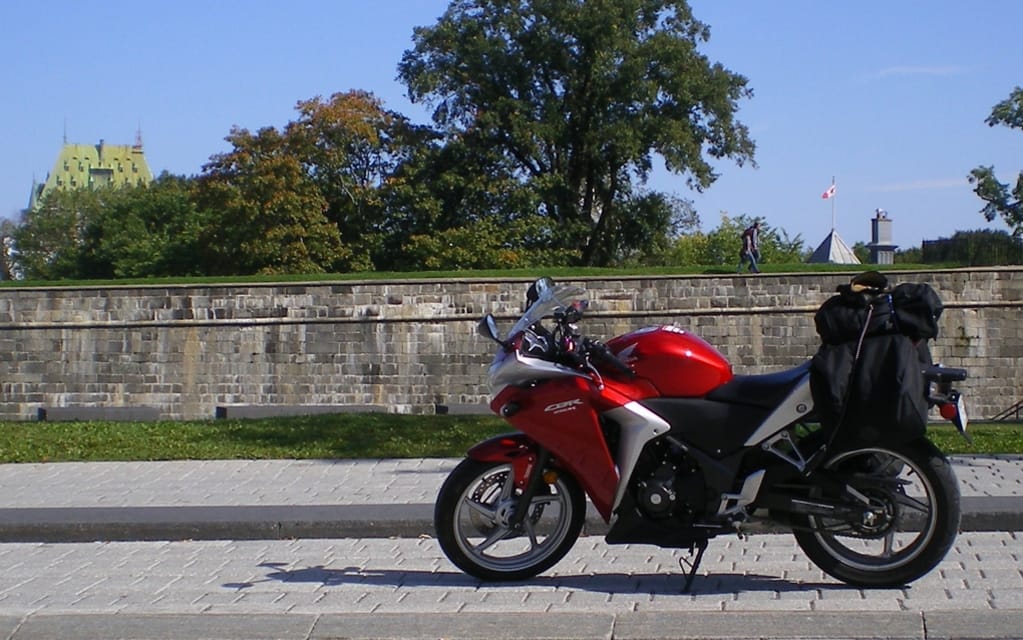 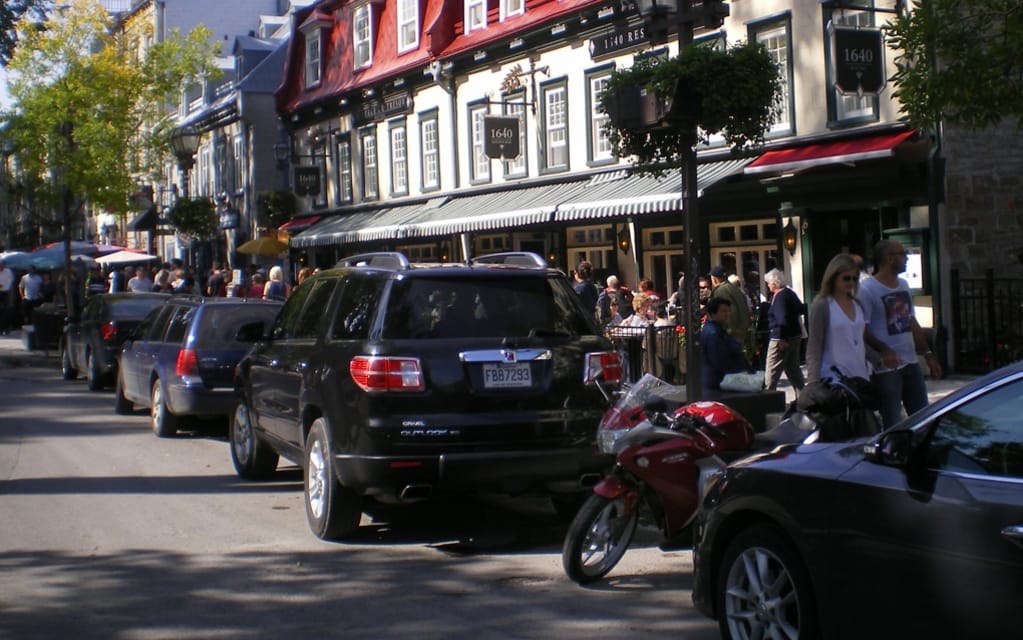 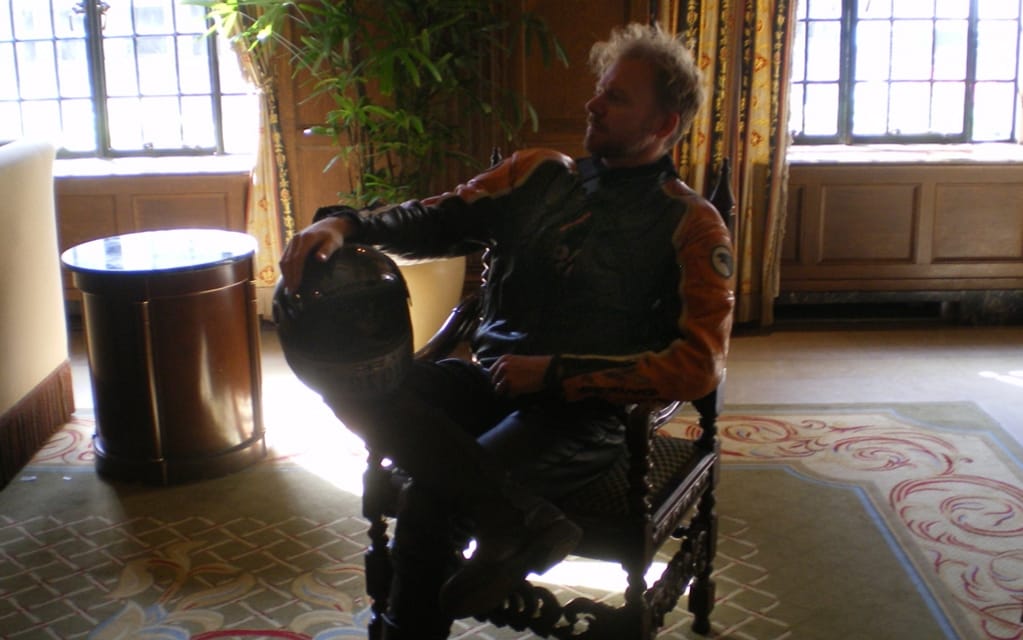 Eastbound and Down: Toronto to Halifax on a Honda CBR250R

When I was 23, I rode a two-stroke Gilera 125 from London, England, to Pisa, Italy. I consider that journey (1,200 kilometres across three countries and over one of the highest Alpine passes in Europe) to be among the most foolish things I have done, right up there with hiking across the land-mined demilitarized border of Czechoslovakia in 1990. The Gilera was 10 years old at the time, a cheap little rocket that I had bought that spring for tooting around London. It was a full-fairing grand prix replica that pushed about 27 horsepower out of its Coca-Cola can-sized single-cylinder engine. The seat was a mousepad-sized foam mat an inch thick.

When driven flat out the fuel tank had a range of 100 kilometres, which was a blessing since an hour at a time was all that my neck, knees, and bottom could handle. It also drank copious amounts of Castrol 747, three bottles of which I carried tied to my luggage. I loved that motorcycle to pieces. That journey was foolish because I was a foreigner in strange lands with little money and no map, and because that type of motorcycle was absolutely inappropriate for a long-distance tour across half a continent. I arrived in Pisa in the wee hours after two days of riding flat out. I was broke, wet, and reeking of two-stroke smoke, and my joints were so sore that I had difficulty stretching out to fall asleep. It is one of my happiest motorcycle memories.

In late 2010 I flew to Los Angeles to try out Honda’s CBR250R and came back impressed. After gushing about the capabilities of this new breed of small four-stroke, I watched the negative comments come flying in: small bikes are fine for beginners but not capable of “real world” riding because small engines can’t hold up to sustained highway use; they are unstable in high winds; they can’t carry an adult passenger for more than 20 minutes; they’re not as much fun as big bikes are.

It was true that my Gilera needed a rebuild after that summer’s 2,500-kilometre thrash (I made the return trip a few months later), but it was an old, finicky Italian two-stroke pushed at all times to the limit. The CBR, I argued, could do that trip without so much as a hiccup. You could dash from Toronto to Halifax on it, I suggested. Editor Neil Graham publicly dared me to do it, and so I found myself in a desolate parking lot in deepest Scarborough at seven in the morning, warming up the Honda and making last-minute checks to my luggage straps. It was a cold, wet, and dismal Friday and I was eastward bound for my home in Halifax on a 250 cc motorcycle. I love long-distance motorcycle trips and I love being right.  I knew the Honda was going to make a terrific companion.

Or at least that’s what I promised myself, and my worried wife back home. I hadn’t ridden the Honda since the test ride in California nearly a year ago (in fact I hadn’t ridden any motorcycle since) so it’s worth mentioning that the Honda Effect took place. To those unfamiliar, it goes like this: 10 minutes into operating a Honda product you feel that you have always owned that Honda and that you could ride it to the end of the earth — or the Maritimes, which for most Ontarians is just as far. Merging into eastbound traffic on Highway 401, I wiggled around behind the screen to find a comfortable spot and immediately felt good. The best view of Scarborough is in the rear-view mirror of a fast-moving vehicle, and the CBR250R was at ease at Toronto highway speeds. As the hours and kilometres passed, my mind drifted down all the wonderful avenues of thought that we normally don’t have time for. The motorcycle helmet is the world’s greatest thought incubator, trapping you on long journeys inside a bubble of your conscious mind. Part of your brain is scanning the road, watching traffic, and operating the motorcycle, but your active mind is thinking over the issues of the day, of your life. In my case, our move from Quebec and our attempt as a family to rebuild in the aftermath of a recession that has hurt us badly. I wondered if my daughter was going to think of Halifax as her home when she got older (and if I would). I wondered if my fledgling motorcycle business would ever amount to anything. All the while the towns along the Loyalist Highway drifted by and the Honda hummed contentedly. I occasionally sang along, out loud.

I reached Montreal by noon, in time for a conference I wanted to attend. By then the sun was shining, which made my arrival more festive. As usual in that city, there was a protest downtown, with a stylishly dressed young mob mixing with disgruntled picketers, all of which made traffic grind to a crawl.  The CBR needled its way through tiny openings in the crowd and between cars like no larger bike could.

Filtering to the front of a queue of stopped cars (I know this is illegal in Canada, but I lived too many years in Europe and really, what good is a motorcycle if you can’t take advantage of its diminutive size?) I pulled up next to a couple of bikes. A guy on a V-Strom looked me over, then turned to a woman on a CBR125R and shouted, “Hey! It’s the new 250 I was telling you about.” He asked how I liked it, and I told him. I’ve ridden exotic motorcycles and none of them, except for my Laverda and the Yamaha GTS 1000, have ever gotten this level of attention.

It is not a perfect motorcycle: “Made in Thailand” has a ways to go before it represents the same level of vault-like integrity that “Made in Japan” does. With scarcely 3,000 km on the clock, the fork squeaked, the shock bottomed constantly, the paint showed wear and the mirrors vibrated annoyingly.  But regardless of weather or road conditions the handling was faultless. Mid-corner changes in direction were easy while grip was reassuring (on budget tires, no less), and the brakes are amazing. For five grand it’s a towering achievement.

On my second day on the road I passed a pair of dirty pants strewn across the right hand lane of the highway. As a child I used to wonder about stuff like that, about how a single shoe or shirt could end up on the ground in the middle of nowhere. I used to imagine a scenario where a couple was fighting in a car and one of them would reach into a suitcase and begin tossing their partner’s clothing overboard. It wasn’t until touring on a motorcycle that I discovered the truth: motorcyclists lose luggage with painful regularity. Once, I arrived at work and discovered that both my saddlebags were missing. Retracing my route for 40 minutes, I found them in a ditch, mostly intact. I was using those same Belstaff bags on the Honda. They were tied down well with bungee cords, but as I worked my way east that morning, a melting rubber smell wafted into my helmet. Thinking nothing of it, I motored on, only to discover later that one of the bags had shifted and rubbed against the rear tire, which ground a hole in the bag and a flat onto the bottom of my sneaker. I taped up the hole, lined the bag with a garbage bag, mounted it carefully and continued on. The pants, it seemed, had been a warning. On the windswept Autoroute 20 east of Quebec City a small-bike myth was shattered.

Strong gusts coming off the St. Lawrence punched into my side for an hour but failed to upset me. I sailed past dozens of V-twin cruisers with engines six or seven times the size of the Honda.  Passing guys kitted in their finest bad-boy attire on the tiny Honda brought me perverse pleasure. Their bodies were exposed in the windstream and gusts of wind ballooned their chaps comically. I waved to everyone, including a couple on an ST1300 and a hero on a slammed Gixxer. They all waved back.

The CBR had a slightly squared rear tire when I received it, but as I meandered along the rivers of eastern Canada its correct profile returned. Crossing into New Brunswick, I paused to take on fuel and called my wife. She had booked me into a hostel in Fredericton, and asked if I knew that the office closed at 10 p.m. I hadn’t. It was 8:45, and I was 140 kilometres from Fredericton. I amended my plan after considering the speeds required to arrive on time and after factoring in New Brunswick’s abundant moose and deer population. I left the Irving station with the intent of spending the night in nearby Woodstock.  I spun the Honda up merging onto the highway and tucked in behind a Ford Focus wagon that was the only car in sight. His headlights spilled a wide arc of light across the road and into the adjacent forest.  I drifted a half dozen car lengths back. We settled into a 130-km/h rhythm up and down the hills of the St. John River valley. The long slopes taxed the engine, making it hard to maintain contact with the Ford on the uphill grades. Downhill I eased up to maintain the gap. We caught and passed a couple of trucks, and each time I slipped in behind him. My eyes were glued to the forest lit by my wingman and as the kilometres mounted I fell into a trance-like state. I was so focused on the forest and the road and that Ford in front of me that time and distance lost meaning.

We passed Woodstock and continued on to Fredericton. We were making fabulous time, but the real reason I carried on was that I was having fun. It reminded me of that night on the Gilera racing down the nighttime coast of Italy 12 years ago. Despite the danger, I felt almost obliged to continue. It wasn’t for the sake of saving a few dollars with a less expensive hotel room. That would have been stupid. It was for the sake of feeling alive, in the moment, and, for the first time in two years, completely in control of my life. The Ford pulled off just before the main Fredericton exit but I was safe now under the lights of the city. I rolled up to the hostel at five past 10, got my keys, and called my wife. Motorcycling along a deserted two-lane highway in the St. John River valley the next day at speeds that were legal but taxing to the Honda was pure joy. The motorcycle was working hard, but I wasn’t. I immersed myself in the scenery, the sound of the engine on full chat, and the feel of the sun warming my legs. Like my re-education in Europe on the Gilera all those years ago, the Honda CBR250R had reminded me again why I ride.