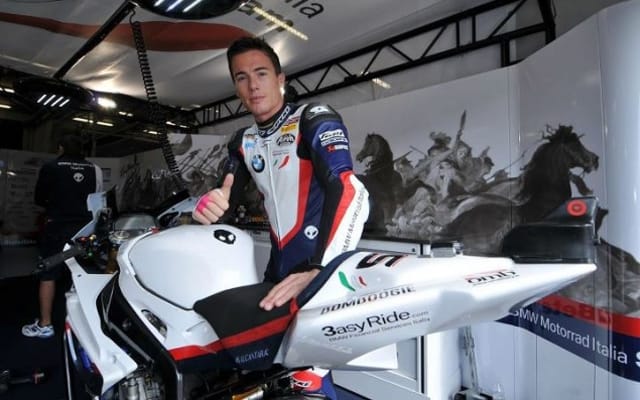 Two-time Worldsuperbike champion James Toseland announced his immediate retirement from racing on Friday, due to irreparable damage to his wrist from an injury suffered during private testing at Aragon in March.  The 31-year-old Briton, riding for the BMW Motorrad Italia SBK Team this season, underwent intricate orthopaedic surgery and  returned to competition in May at Miller Motorsports Park in Utah, after a three round absence, only to have to withdraw from the round’s second race due to continuing difficulties. He didn’t race again until reaching home turf at Silverstone in July. After another crash in the following round at Nurburgring last Sunday, and a consequent trip to his specialist, it was confirmed that Toseland was too permanently disabled to safely continue racing.

“The easiest way to explain it is that I don’t have enough range of movement in my wrist to race professionally and no amount of physiotherapy is going to improve that,” wrote Toseland on his website.

“This all led to the verdict was that it’s no longer safe for me to continue a career in motorcycle racing.”

“I have to put the safety of the other riders on track first, as well as thinking about my own safety. Knowing that I will never again be fully fit to race at the highest level, it’s also unfair for me to occupy a great seat in WSBK that a young, talented rider who is fully fit could take better advantage of.”

Toseland won the Worldsuperbike title in 2004 with Ducati and 2007 with Ten Kate Honda.  He moved MotoGP in 2008, but came back to Worldsuperbike in 2010, after a couple of difficult seasons with the Tech 3 Yamaha team.

“Obviously, the decision has been a difficult one and it’s been really hard to take the advice of my consultant and admit defeat on this occasion but I really have no other option left at this stage,” he added.

“I’ve tried everything possible for the last few months but the sad truth is that none of it has worked and my wrist will never fully heal enough for me to operate the throttle properly and navigate right hand turns.”

“You have been amazing in the best and worst times of my career and it’s been almost like having a second family to support me through my career. So, thank you for everything and I hope that I have done you proud.”