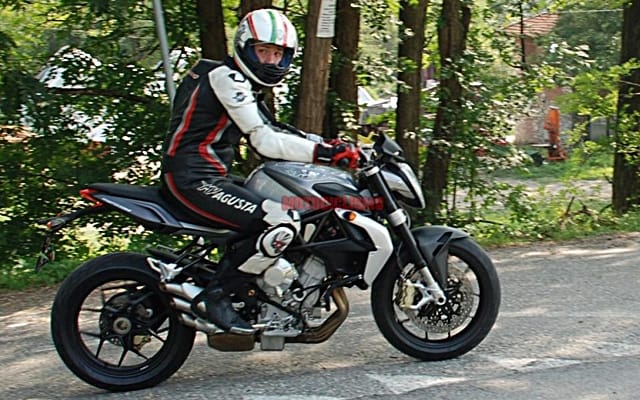 Set for its official public unveiling at EICMA in November, MV Agusta’s new Brutale 675 B3 was recently captured in a “spy photo” while testing near Varese. The photo, courtesy of Motociclismo, shows that, just as the original Brutale design borrowed heavily from MV’s flagship F4, the Brutale 675 is very much their three-cylinder F3 supersport in naked streetbike form.

The new Brutale is slated be MV Agusta’s most affordable motorcycle to date — expected to be priced somewhere around the €9,000 — and the Italian manufacturer hopes that the middleweight naked along with the F3 will successfully take their brand into new market segments. There are also plans to build a hypermotard model around the F3’s motor, and a dual-sport/adventure model has also been rumoured, but while MV Agusta’s plans for the future seem promising, its short-term survival has recently once again come into question. The eagerly anticipated F3 which debuted at EICMA in 2010 has yet to come to market. The delay, according to the rumour mill, is because MV is having cash flow problems and can’t get the credit it needs from parts suppliers to buy in bulk and build its new machines affordably. Despite these supply chain problems, MV maintains that the pricey Serie Oro F3 will be available this year, while the base model will hit showrooms in spring 2012. Whether the base F3’s final market price will still be as affordable as initially anticipated is another matter.