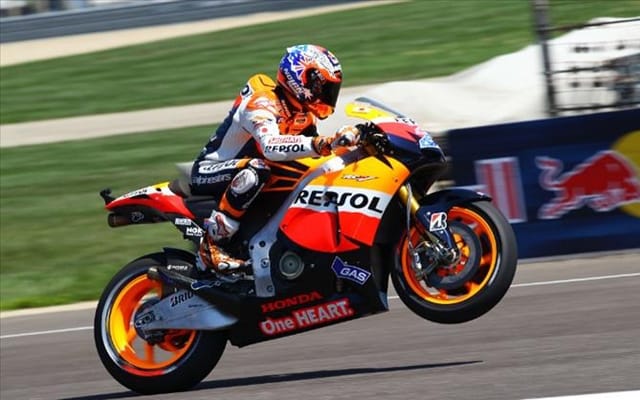 Casey Stoner continued his march towards the 2011 MotoGP championship as the Repsol Honda rider took his seventh victory of the season at Indianapolis today. The Australian, who battled a large rodent and a slippery new section of track earlier in the weekend, qualified on pole and then completed the 28 lap main event 4.828 seconds ahead of last year’s Indy winner Dani Pedrosa. American Ben Spies, was another 5.775 seconds back in third, while reigning champion Jorge Lorenzo placed a distant fourth.

Pedrosa led for the first few laps off the top of the race and then Stoner took over and walked away with the rest, posting a record Brickyard race lap in the process. This was Stoner’s third consecutive race win and he now sits 44 points ahead of Lorenzo in the overall standings.

“It couldn’t have gone much better,” said Stoner.

“I made a few mistakes in the first and second corner, Jorge came past and it was really difficult to find a place to overtake. Conditions were hard so it was about staying consistent and focused.”

The Brickyard’s sandpaper-like surface wreaked havoc with many rider’s front tires. Karel Abraham and Loris Capirossi retired their Ducatis early because of excessive wear and Lorenzo’s front tire problems forced him to relinquish his chase of the two Honda front men and even allow his team-mate Spies — who’d moved up from ninth after a terrible start from the front row — to pass him and take the final podium spot with 11 laps remaining. Nicky Hayden pitted with three laps to go to see whether there was still rubber on his front rim and then rejoined the race to finish last and salvage a couple of championship points.

The next race takes place September 4th at Misano in San Marino.