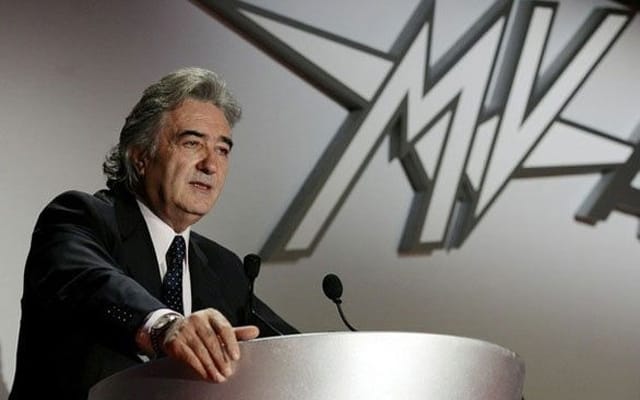 Claudio Castiglioni, president of MV Agusta Motor S.p.A., died earlier today at a clinic in Varese at the age of 63. The visionary motorcycling magnate, who with his brother Giancarlo headed Italian firm Cagiva, helped revive both Ducati and MV Agusta over the course of his career and was instrumental in the creation of such iconic models as Ducati’s 916, and Monster, and MV’s F4 and the about to be released F3.

F3 designer Adrian Morton spoke with UK publication MCN of Castiglioni’s contribution to motorcycling:  “There are so many bikes that wouldn’t exist if it weren’t for Claudio. His passion for making beautiful bikes is what shaped everything we did, and his presence is always felt here. It’s shocking to think we won’t see him any more. He was heavily involved in all future product development right to the end in his characteristic ‘insistent’ manner. His passion for the bikes kept him going. It was a nightmare trying to keep him happy with the F3, but that’s what made it the bike it is. In an era when most people who run businesses wouldn’t care if it was motorcycles or washing machines their factories turned out, Claudio was the last of a breed. Hopefully the bikes we do in future reflect his insistence on special machines.”

Prior to his death, Castiglioni handed control of MV Agusta to his son Giovanni.