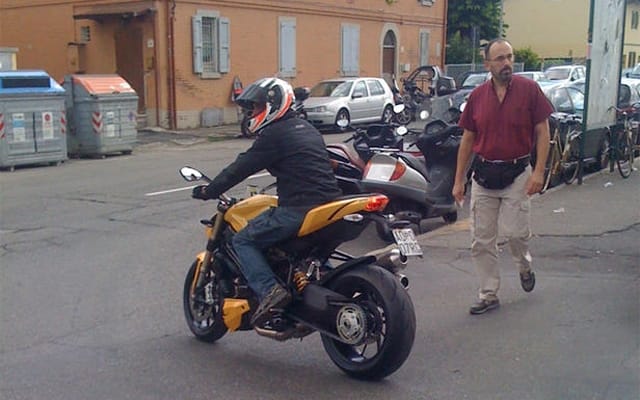 It’s been rumoured for a while now that Ducati will be expanding its Streetfighter range with the addition of an 848 cc powered version. Seems the rumours are true, as the new model, finished in Ducati yellow, was recently spotted outside the factory gates in Bologna.

Giving away that the pictured Streefighter is an 848 is the fact that it has the same five-bolt rear hub as the 848 EVO superbike, rather than the six bolt unit of its higher powered 1099 cc sibling.  Also noticeable are the radial caliper Brembos (instead of the original Streetfighter’s Monoblocs) and upside-down Marzocchi fork found on the Monster 1100 EVO.

Word is that Ducati also intends to upgrade the current 1099 cc Streetfighter with the same 1198 Testastretta 11° mill currently powering the Multistrada 1200 and Diavel.  Otherwise the larger Streetfighter is expected to stay the same, but the motor change means the Streetfighter’s valve service interval will now be twice as long, increasing from 12000 km to 24000 km and decreasing expensive trips to a Ducati mechanic.

The Streetfighter 848 is expected be officially unveiled in September; our information indicates late September. We’ll be sure to bring you full details on the new model then.