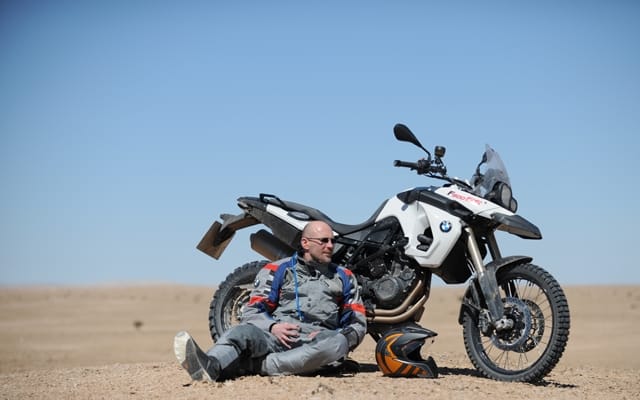 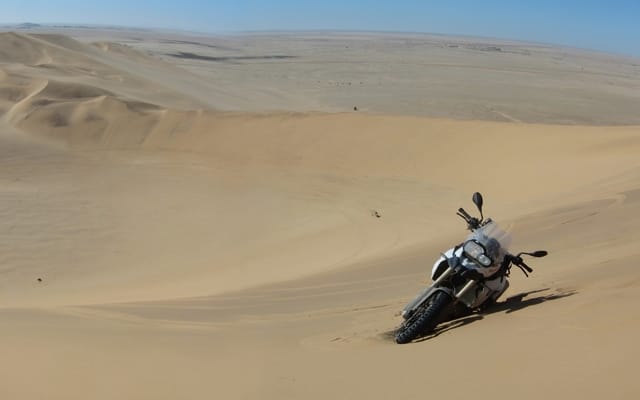 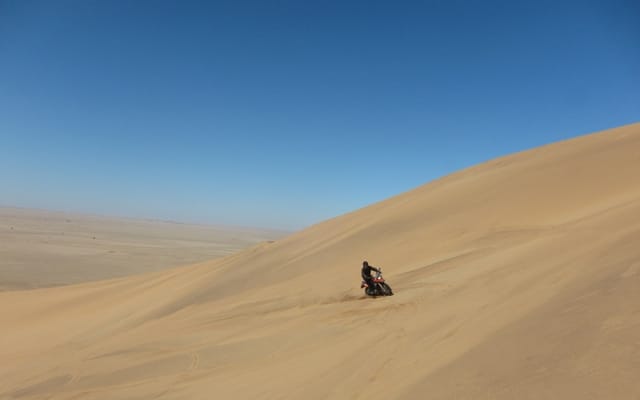 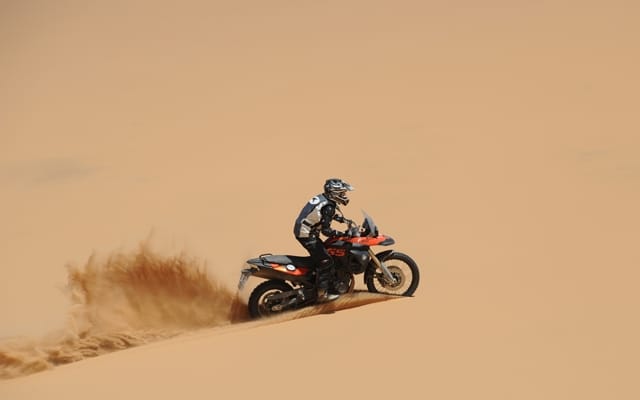 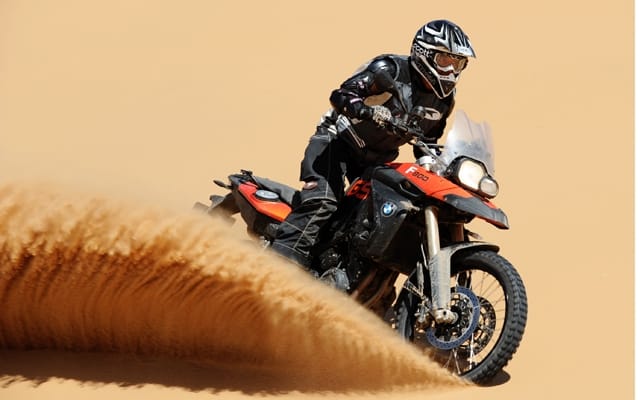 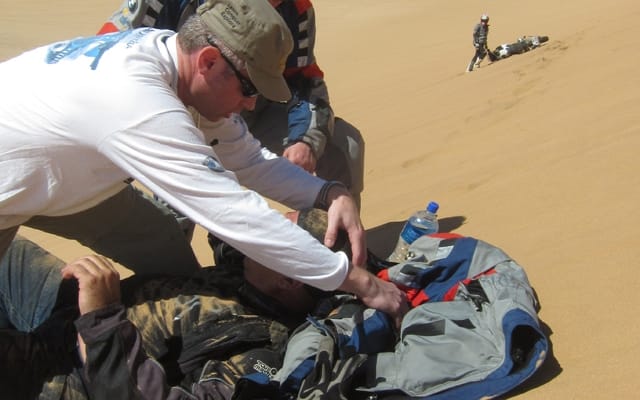 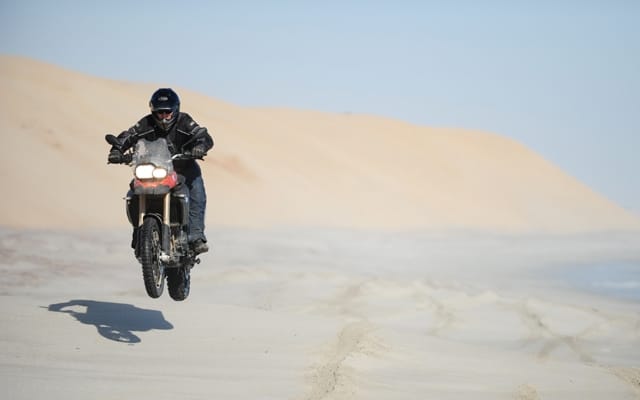 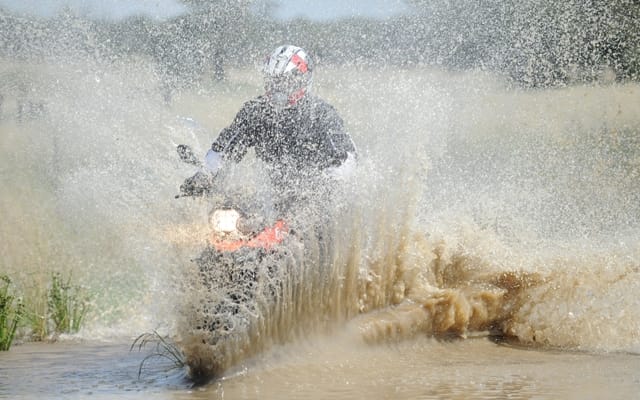 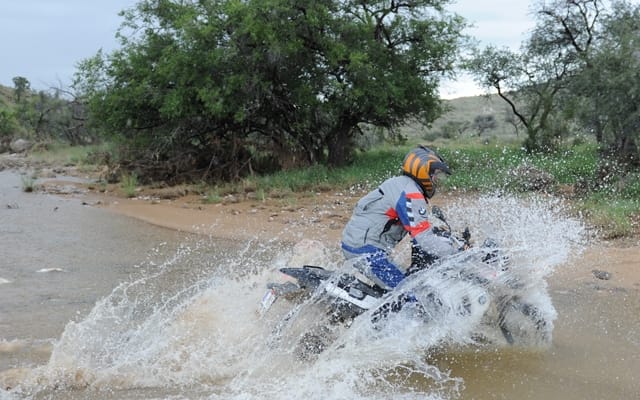 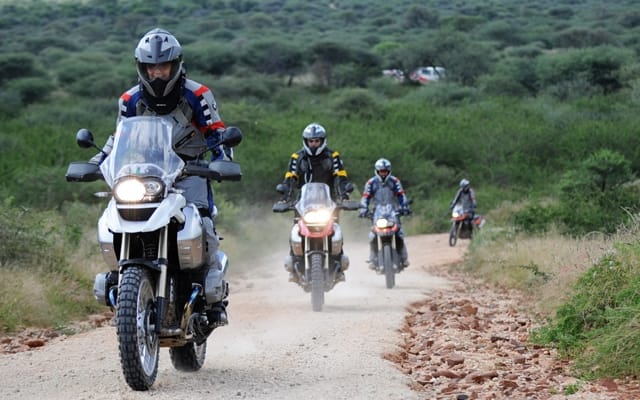 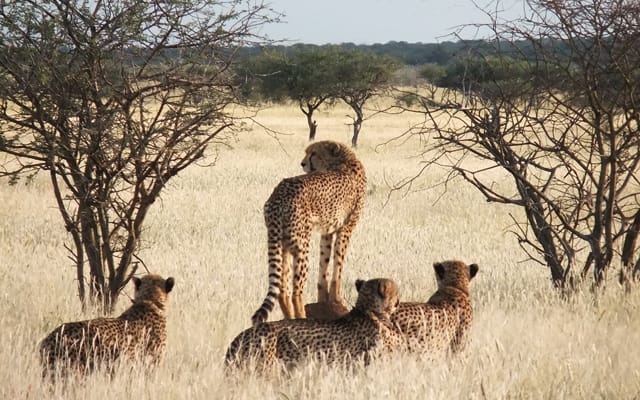 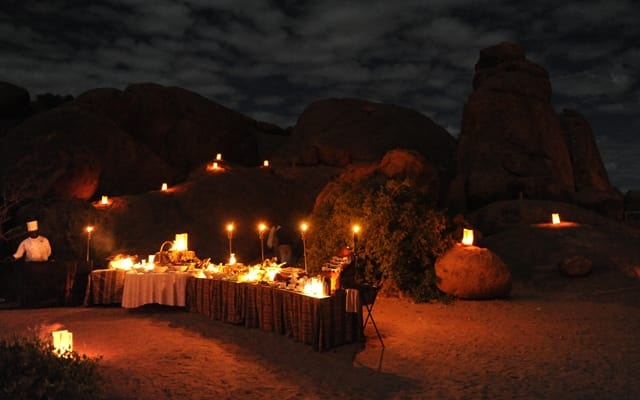 David Booth is the kind of disgraced ex-columnist that it’s wise to keep an eye on, so instead of letting him twist in the wind, we invite him to submit stories like this one, a trip through Namibia with a dozen of his friends. (Like he has a dozen friends.)

Here’s how you tackle a Namibian sand dune on a motorcycle: you point the bike at the hill, open the throttle as far as it will go, and then change nothing, no matter what. When the bike hits that slope of loose sand with the engine screaming it’ll begin fishtailing like a stripper on ice skates. That’s okay, that’s what you came for. Just don’t relax that throttle, because if the bike slows down the front wheel will twitch even more violently, and then it will dig in and stop moving. Then your face will be carried by momentum over the handlebar and into the sand, and if you’re lucky, the rest of you will follow pretty quickly.

I didn’t have any trouble with this “speed over common sense” thesis of dune riding. I was too slow-witted to slow down, and so I made it to the top with relative ease. Gavin Morton, however, managed to prove that even when you do it right, things can go wrong. The German stunt rider performed a high-speed face-plant so brutal that an impression of his helmet’s inner liner was left on his forehead. No worries; they sent a surgeon along with the team. A trauma surgeon. A German trauma surgeon. You can’t get any safer than that.

I did not know that they’d recruited a German trauma surgeon to attend our little tour group when I agreed to go to Namibia. I didn’t even exactly know where Namibia was. I did know that the invitation to ride a dirt bike somewhere in southern Africa frightened me. So of course I said yes.

I grew up in Northern Quebec. Not some quaint suburb of Montreal or boutique bedroom community outside Quebec City, but in the rough-and-tumble frontier town of Sept-Iles. Paved roads were rare, police even more so and Saturday night was made for street racing. Mining money made young men rich and youthful testosterone quickly turned that money into motorized mayhem. I grew up playing hockey because that was what one did in northern Quebec’s interminable winters. I also rode dirt bikes, because that’s what one did during northern Quebec’s impossibly short summers.

I loved my first dirt bike, a Honda CT70. I rode all day, every day. I rode until I ran out of gas or until the sun went down. If there wasn’t any snow on the ground (and often when there was), I was exploring the Quebec wilderness on that stone-reliable little Honda.

Larger dirt bikes followed. The jumps got higher, the whoops got deeper and I eventually got my first job testing motorcycles at this very magazine, where, as the low man on the totem pole, I was put “in charge” of off-road testing. I could jump and whoop to my heart’s content and get paid for it. Here the story turns dark. There was a marriage, a job testing cars, because I was married. Other than a two-day trek through Morocco last year, off-road riding was something I read about, rather than did.

Thus, when I received an invitation from BMW Motorrad CEO Hendrik von Kuenheim to spend a week traipsing through Namibia, my first thought was “where the hell is Namibia?” (find South Africa and look up). My second thought, of course, was that I’d like to survive whatever it was we’d be doing. What dirt-biking talents I might have had were by now decidedly rusty, and nothing about riding in northern Canada would have prepared me for southern Africa. Riding sand dunes, for instance, is something I’d only seen in Paris-to-Dakar TV coverage. Riding on sandy beaches? Even in northern Quebec, such shenanigans are verboten.

But it turns out that riding sand dunes is perfectly suited to someone of meagre talent and great enthusiasm. Going as fast as you can at an obstacle and forcing yourself to keep the throttle pinned wide open while the bike tries like a bucking bronco to spit you off is something that a dirt-rider of my talents can manage.

Our tour group was 10 motorcycle journalists from around the globe, with some BMW executive types and that single ominous German trauma surgeon. We were surprised by how competent BMW’s F800GS (the “lite” version of the R1200GS) was in that treacherous terrain. And while I can’t tell you that the BMW was the equal of the rapier-like Husqvarna TEs we also used to attack the dunes, every single journalist came away amazed at what silliness we could get away with riding the F800 over terrain its designers could only have had nightmares about. If you had the cajones to keep the throttle pinned in third gear, you could actually circumnavigate the big dunes’ sand bowls right to the topmost ridge, the bars waggling and rear-end fishtailing, but the F800 feeling remarkably composed. We had a Husky TE310 enduro along and though it was far more capable in the sand, it didn’t have the moxie to reach the crest of the dune. (A newer Husqvarna 449, however, had power to spare and felt like it could leap right over the famed Dune 7; in fact, it did, with one poor sod cresting the mountain with such velocity that he jumped over the peak only to find that the other side’s downhill portion was steeper; you could hear him swearing over the roar of the lightly-muffled big single.)

BMW’s long-standing passion for adventure is why the F800GS makes such a remarkably competent off-road weapon, at least when equipped with Metzeler Karoo knobbies. Its biggest fault in Namibia was not suspension or weight, but a lack of adjustment to the rear brake pedal, which meant that the lever was too low to be delicately modulated while a rider stood on the pegs. It caused a few stalled motors when we were attempting slow-speed trials-like manoeuvres. BMW sells an accessory pedal extender to alleviate the issue, but it would have been better for us if the entire mechanism was adjustable from the factory. As well, it would have been expedient if we could have removed the passenger footpegs and their attendant bracketry; dabbing a foot down under a momentary loss of traction sometimes resulted in banging a calf against the pegs, which was not exactly comfortable when traveling 40 km/h and struggling to maintain balance.

Nonetheless, the BMWs were sufficiently capable off-road that they did not limit where we went or how fast we got there. Indeed, having ridden the 800, I now prefer it over its more renowned and more powerful R1200GS sibling, simply because less weight taxes my riding ability less. When you’re riding upwards of 400 kilometres a day (an easy day touring four-lane highways but a painful shag through a sandy desert), ease of riding becomes a priority.

Besides, a large part of off-road adventuring is slowing down to take in the sights, and there is plenty to see in Namibia. Like Anzo, the lion, at the Erindi Game Reserve; his territorial growl was nothing like the “roar!” portrayed in old Tarzan movies. Instead, it started like the beast had the mother of all furballs stuck in his throat, then morphed into a truly ferocious rasping cough, and finally settled into something that I swear sounds like the low-rpm bark of an open-piped NASCAR V8. From 20 feet away in an open-doored Land Rover jeep, it sounded positively guttural and truly frightening. Thankfully, Anzo was still revelling in post-coital bliss after an evening with a couple of female companions.

We got even closer to four hunting cheetahs — named Toblerone, Coco-Chanel, Nestle, and Hershey by Erindi’s guide, Henco. All were females born in captivity and all were still (unusually) hanging out together three months after their re-introduction into the wild, one presumes because of their shared history. We also got stared down on a trail by a bull giraffe so tall that, if we would have just scrunched down over the F800’s handlebars, I swear we could have ridden under his belly. Giraffes may seem like the tamest of African wildlife but a female tourist was recently killed by a kick from one, so we trod with care.

Indeed, Africa is full of surprises. The most dangerous animal in the African wild, said Henco, is not the rhinoceros, the elephant, or even the lion, but the hippopotamus. As placid as it looks nearly submerged in water under the noonday sun, the hippo seems to display quite a temper when it’s feeding at night. More humans are killed by the giant “river horse” than by any other animal in Africa.

The other surprise is Namibia itself. A large country — about 320,000 square miles in all, about the size of France — it claims only two million inhabitants, making it one of the most sparsely populated countries in Africa. One of the reasons it remains relatively poorly known in the West, I suspect, is because the political strife so common to the continent seems to have passed it by. Everyone seems to speak English, though it is the first language to only about seven percent of the population (Afrikaans is spoken by more than half the population and German by almost a third). The capital city, Windhoek, is home to about 300,000 and is comparatively modern (I found a well-stocked gym while the rest of my group prowled a nightclub as trendy and pretentious as anything in Toronto).

It’s also really hard to imagine a friendlier place. Perhaps it is the delusion of the tourist. Or maybe we just happened to visit the more upscale parts of this oh-so-barren land. But there was virtually none of the strife that commonly fills our newspaper headlines over reports on Africa, and the countryside was not plagued by the racial tension so apparent in other parts of the continent.

The final surprise came on our last day of riding. April is Namibia’s winter season — the equivalent, it must be said, to a glorious spring in Canada — and is the only time when the country gets rain. Although the rainfall had achieved records for the year, we had seen none of it. Until the last day. Then the heavens opened up and for 12 solid hours poured water onto Namibia. Long-dry rivers overflowed, roadways were overwhelmed, and what was once dusty grit became mud. Our hosts were appalled. Most of the other riders were chagrined. Everyone was cold, wet and tired. Except me. Suddenly, this very alien desert was home. It was wet. It was cold. It was muddy. It was, for one rare day, at least, like northern Quebec where I was born and raised.

I absolutely loved it. Where my compatriots tip-toed through mud, I blasted through full-throttle, slithering and sliding just for the thrill of being out of control. Where less experienced aquanauts dribbled through streams, I splashed through completely oblivious to the fact that I was absolutely soaked to the skin. No longer was I a decrepit 53-year-old with tired lower lumbars. For two hundred kilometres of pure sodden glory, I was once again a testosterone-filled teen terrorizing his hometown’s cottagers on his first proper motocrosser, a Suzuki RM250. So, as it turns out, if you’re from Sept-Iles, Quebec, you can go home again.You just have to go to Namibia to get there.