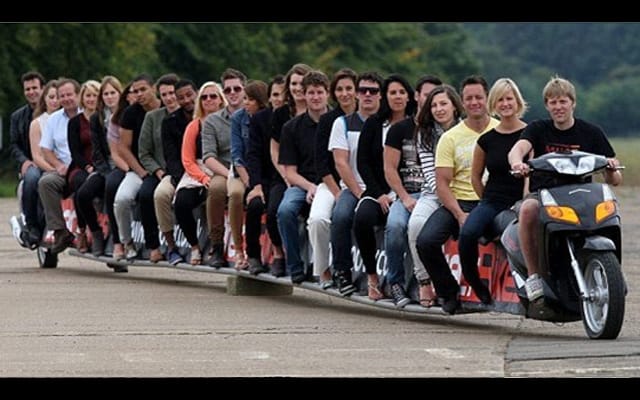 British plumber Colin Furze has been at it again. Holder of the current record for world’s longest motorcycle at 14 metres, Furze now has gone even longer, stretching a 125 cc scooter to 22 metres in length with the help of a home-made aluminum frame. To make the record stick Furze was required to ride his contraption for at least 100 metres, but was in fact able to ride the virtually uncontrollable contraption for over a mile along the Saltby Airfield in Grantham, UK, hitting a top speed of 35 mph.

“When I first got on it I thought it would never work and at a slow speed it’s almost impossible to keep upright,” said Furze about the 25-seater. “But once you get going it becomes a bit easier, although it is a real strain on your arms as it has such heavy steering. It wobbled a huge amount as I drove along and apparently the back of the bike was weaving around all over the place.”

“This motorbike was so heavy and difficult to drive I think it would be impossible to make a longer bike. I think this record will stand for a very long time.”

Furze’s latest record is still waiting for verification from the Guinness Book of World Records. The 31-year-old plumber also holds the distinction for buidling the world’s fastest mobility scooter, with a turbo-charged 115.21 km/h top speed, and for being arrested for riding his flame-throwing scooter on a public roadway.