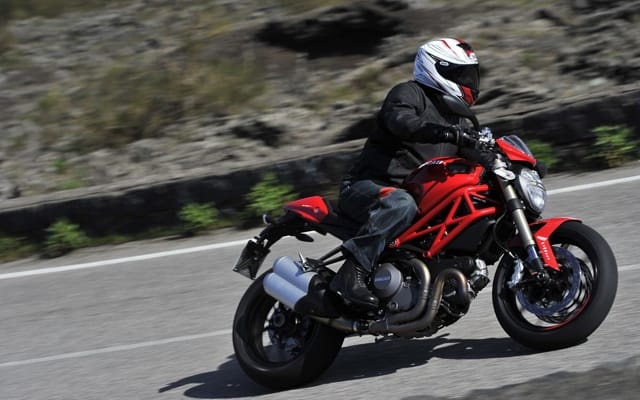 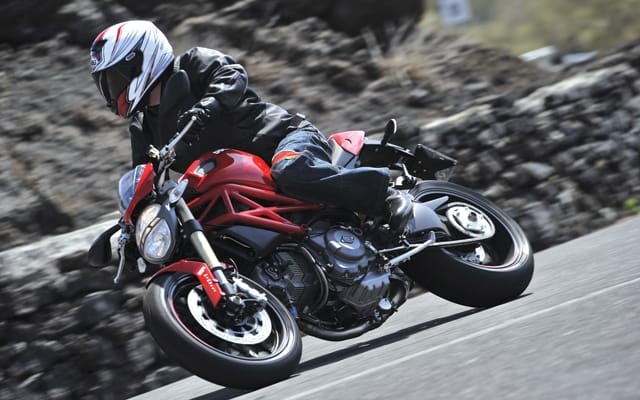 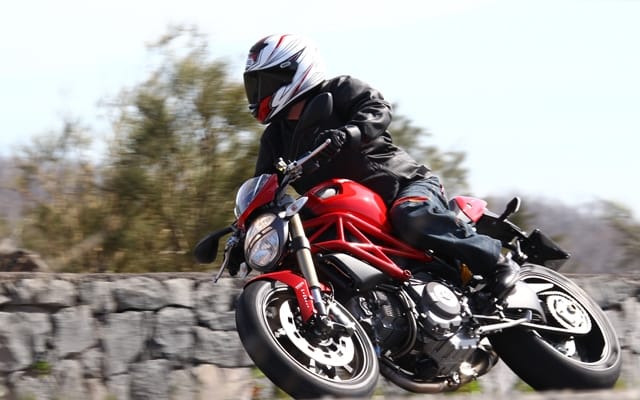 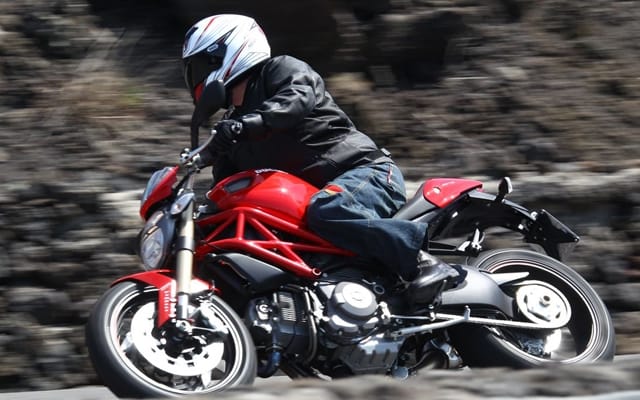 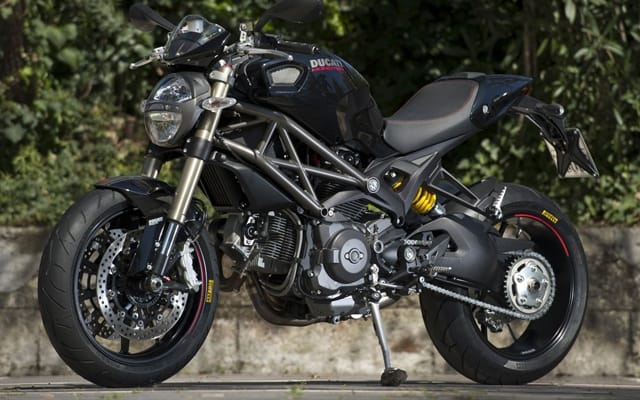 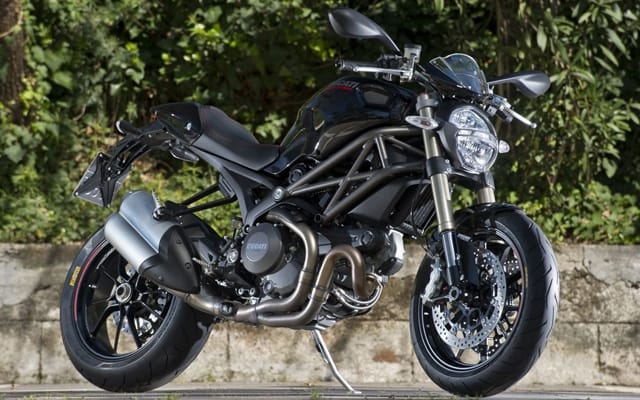 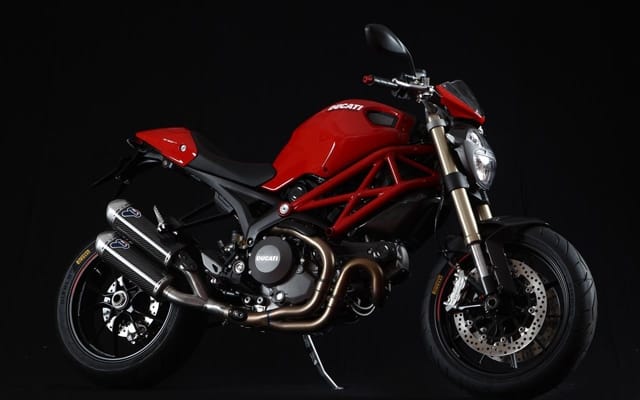 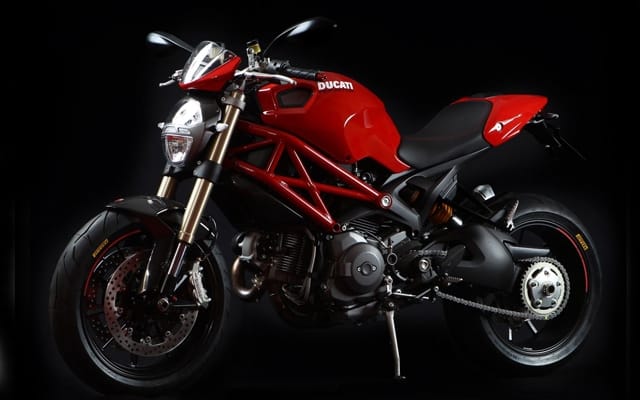 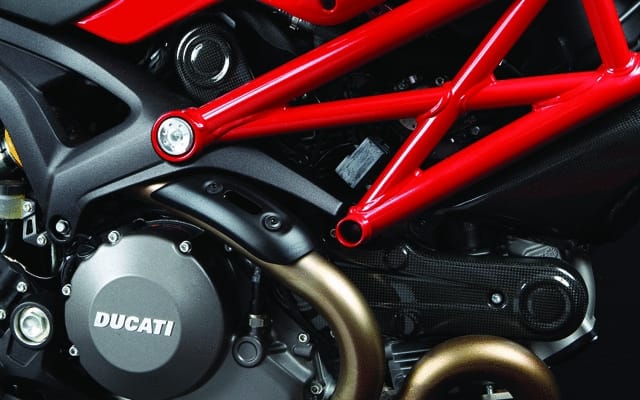 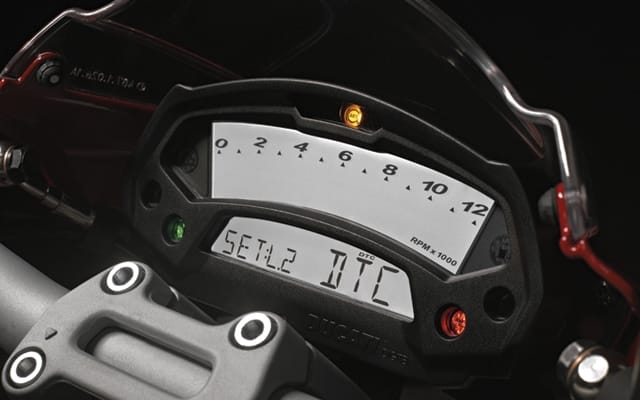 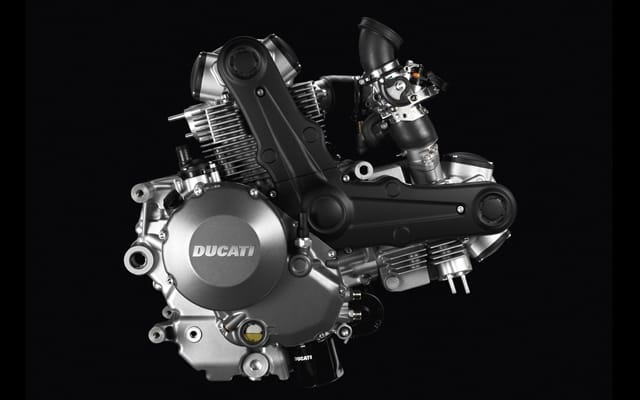 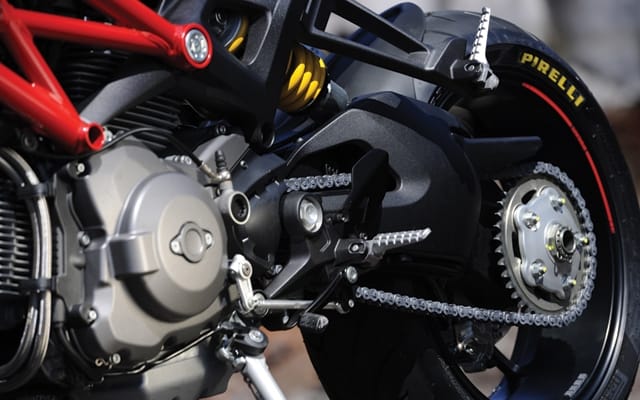 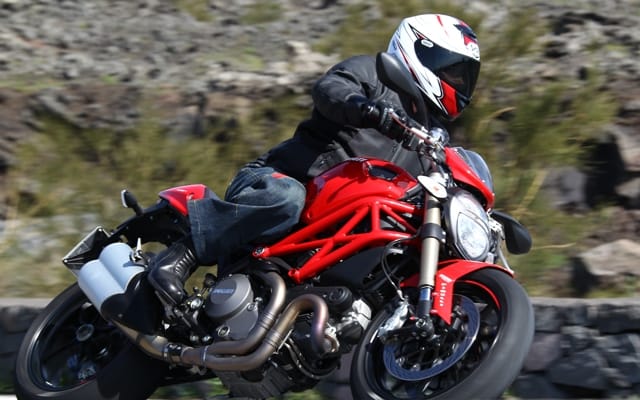 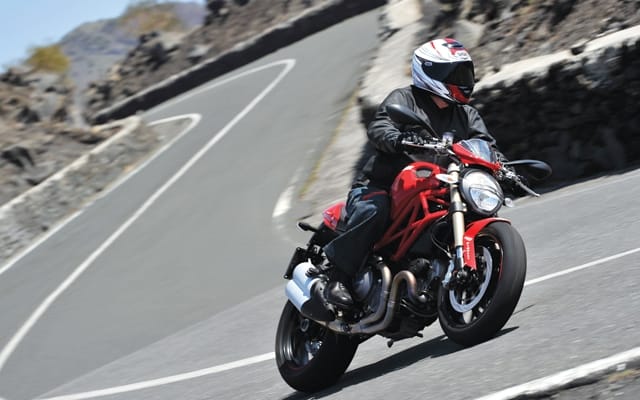 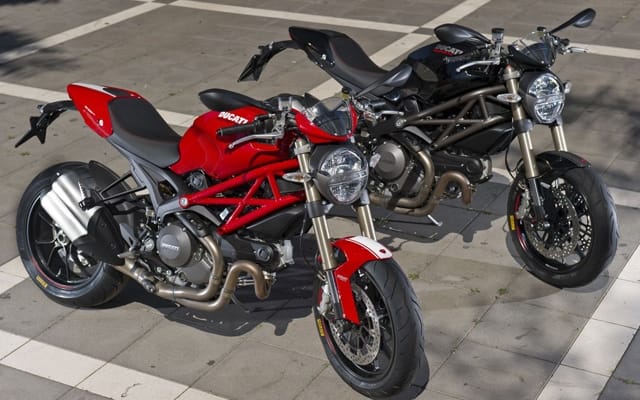 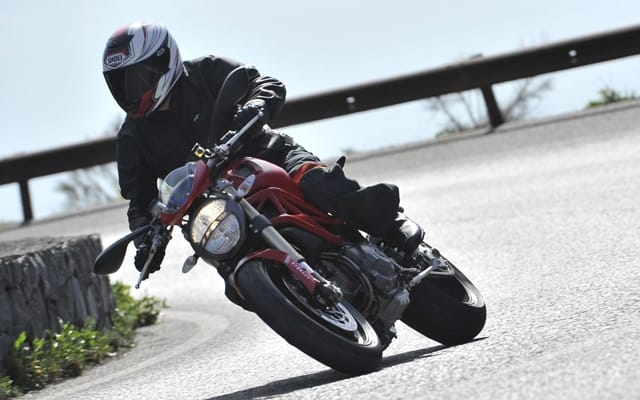 Too long a life can often mean a sad ending, but Ducati’s Monster gets better with age.

Near the shore of Lake Ontario about 75 km east of Toronto there is a narrow and twisting road that runs into pretty little Port Hope. Before that, there’s nothing but the streaming 401 and a painfully boring motorcycle ride. But here, on this little winding thing, Ducati’s black Monster 1100 EVO is in its own place, bending into corners with a freedom of expression that comes only when other traffic is somewhere else, not here.

One long, fast left hander is signed for too little speed even in a bus. The sign is ignored, the Monster rails through, and a road taking off to the right has shot past before its own sign can be noticed. It’s the road to Port Hope. The rider is too engaged in this fundamental joy to notice, and so he’s just gotten lost. Next comes a wooden bridge that you’d walk a bicycle over, and then a series of long, sandy straights that just seem wrong. A few minutes later, the Monster is back on course, its rider having regained his senses. Never mind: even there on a tractor’s road this newest Ducati is companionable entertainment.

At a glance, there are more similarities than changes between the 2011 Monster 1100 EVO and its two-years older predecessor. Among those not-so-numerous changes, however, are a couple that involve power output and safety technology and that distinguish this model in important ways.

The Monster 1100 is given an “EVO” designation (from “Evoluzione,” which is the engine’s label) to suggest an evolutionary upgrade, and that’s exactly what this is. And as generally happens when evolution plays a role, the newer model is an improvement. Small changes have been made to what was a very good motorcycle in order to improve comfort and looks, though we’d suggest that some of those changes are only marginally effective. The new Monster has a wet clutch that, according to a Ducati rep, gives “a super light feel at the lever.” We went looking for a super light feel and couldn’t find it. Although two fingers can get the clutch disengaged, it’s a tough pull, and when traffic slows for a collision on the 401, the clutch lever begins to annoy.

Other changes include a handlebar that is 20 mm higher than the last model’s, but the rider’s weight is still placed on the wrists. This is of benefit at 130 km/h, where the engine is spinning at about 4,200 rpm in sixth gear and the wind blast on the rider’s chest is supportive. At lower speeds, the position can become uncomfortable. Although the Monster is light and can be flicked from side to side relatively easily, we felt a mild reluctance to change direction — it was very slight, but a wider handlebar with a bit more leverage might still make a useful improvement.

The seat on this model has been re-shaped, and its narrow front portion allows our five-nine tester to reach the ground with both feet, simultaneously if not flat-footed. After an hour on the highway, however, the seat pad felt a little too firm.

According to Ducati, this is the first two-valve Monster to make 100 hp, which is five more than the previous 1,100 cc Monster’s claimed output. A bump in compression from 10.7 to 11.3:1 and other changes to the head’s flow characteristics are said to account for the power increase. Other improvements include the use of a lighter, 848-style flywheel, and lightened crankcases. The torque figure remains unchanged at 76 lb-ft, but this motor has some pop to it. While cruising one of those straight-line farm roads, we apply some throttle at 3,000 rpm in first gear and the front wheel is lofted into the air. Even with the Ducati’s notoriously tall gearing, first and second gear lunges are potent when the throttle is stroked.

The engine craps out at about 8,000 rpm, but there’s no need to go that high; short-shifting at 6,000 rpm keeps the engine in the thick of the power band and results in crisp acceleration. The tall gearing allows an engine speed of about 4,000 rpm at 110 km/h, which on the 401 resulted in a pronounced and uncomfortable engine vibration that reached the rider through bars, seat, and pegs, but shifting down a notch from sixth resulted in a smoother ride.

At low speeds — running at minimum throttle in first gear, that is — the Monster jerks and snatches a bit, but that’s a result of the tall gearing, not any problem with the fuelling, which is by Siemens electronic fuel injection with a 45 mm throttle body and is faultless. Take it off idle and the Monster reacts instantly and accurately to throttle inputs.

Along the winding road into Port Hope the Monster’s new two-into-one-into-two exhaust header and double aluminum silencer produce a stirring melody that urges the rider to press on, but while stalled in traffic on an underpass in Toronto, there’s an irresistible temptation to blip the throttle just to hear that throaty exhaust note echoing off the surrounding concrete. It’s masculine, rich in timbre, and loud enough to be noticed, but not so heavy as to irritate the neighbours — one hopes. The exhaust system’s one fault is that it allows some prodigious heat to rise onto the thighs of a rider when the bike is not moving.

The Monster 1100 EVO is fitted with a “Ducati Safety Pack” that includes ABS and four-level traction control. The ABS system is a Bosch-Brembo package and works very well. Near Port Hope, when a road sign catches a rider’s attention, a quick grab of the adjustable front brake lever activates the antiskid system, even at sedate speeds on dry pavement. The ABS produces a soft beeping sound when working, possibly a result of brake pad vibration. The feel of the ABS at work is subtle. The front brake is a set of 320 mm rotors acted on by four-piston calipers, which are activated by radial pumps and are very strong, though feel initially soft.

The traction control system can be set at four levels: level four (the number is displayed on the instrument panel) activates traction control when any wheel spin is sensed, and level one allows more slip. The traction control system employs two stages of software control, with a soft stage that retards the ignition timing and, if that doesn’t cut it, a hard stage that cuts fuelling right up to the point where no gas gets delivered, if necessary. The wet clutch features a mock “slipper” system that allows its oil bath to cause the plates to slip under severe down-shifting loads. Clutch actuation was progressive and smooth.

The Monster is held together by a Trellis frame mated to an aluminum rear sub frame, and it complements the rest of the motorcycle’s appearance while providing the rigidity necessary for accurate handling characteristics. A left-side swingarm, made in “chill-cast aluminum,” is claimed to reduce weight while maintaining stiffness, and new, aluminum alloy wheels with 10 spokes are also claimed to keep weight down. A 43 mm fully adjustable Marzocchi fork and a Sachs rear shock with preload and rebound adjustability provide compliance that is supple and firm, comfortably handling road irregularities that on some other motorcycles would be jarring. The shock is mounted on the left, away from the exhaust system, where there’s good access for making adjustments.

There is much to like about this latest Monster. It’s a good-looking motorcycle whose components naturally complement one another: the mufflers rise at an angle that parallels the seat and aluminum tail section, the Trellis frame tubes, sloping back at very nearly a square angle with the fork tubes, suggest strength, integrity, and cut-to-the-bone lightness. The paint, in Ducati Red or Diamond Black, is lustrous and rich. And there’s an airiness about the body and engine, a lot of visual space, under the tail section, around the exhaust headers, between front wheel and engine, so that elements stand out on their own cleanly: it’s as if you can see the muscles, and that is visually pleasing.

What you cannot see, however, is the effect of that power: your speed rating. The speedometer is a digital readout below a bar graph tachometer, and in daylight, particularly when the rider is wearing a dark visor, the readout is virtually indecipherable. The tachometer’s graph is easy enough to see, though not brilliantly clear, but the speedometer is nearly impossible to read at times.

But that’s only one concern, and there aren’t many more. The heat at a stoplight might be bothersome and the clutch lever pull might be harder than Ducati says, but in so many other ways they got it right: the torque-rich power characteristics of the engine, the crackling exhaust sound from that double-silencer, the accurate fuel delivery and those highly effective Brembo brakes, plus the “Ducati Safety Package” and a reasonably comfortable seating posture that does not cramp the rider — all of that works to make riding Ducati’s evolved Monster 1100 a treat.

We think this Monster is a case of evoluzione applied to intelligent design, and even a rider who gets lost on the way to Port Hope can find reasons to worship at that altar.