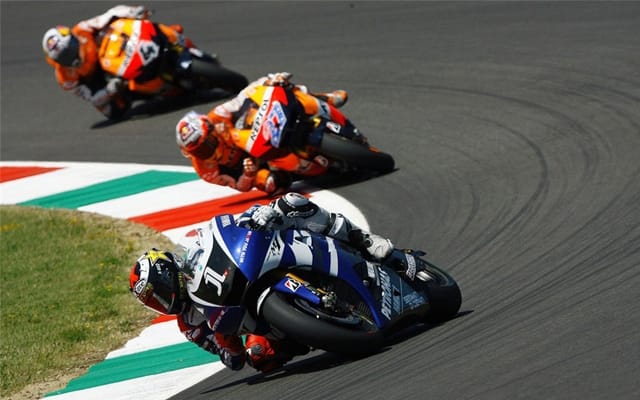 MotoGP: Lorenzo Claws Back at Mugello

Jorge Lorenzo put in a stellar performance to claim a come-from-behind victory at Mugello in Italy on Sunday. The defending champion started the race fifth on the grid, but worked his factory Yamaha ride up to second place and then caught and passed points leader Casey Stoner with six laps remaining to move within 19 points of the Repsol Honda rider in the standings.

It seemed that Stoner, who had racked up three wins and a second in his previous four races, was once again on his way to victory, having led the race from pole position for 17 of 23 laps. But the summer heat wreaked havoc with his tires, allowing not just the hard charging Lorenzo to get by but also Andrea Dovizioso, who snatched the runner-up position from his team-mate on the final lap. Lorenzo’s Yamaha team-mate Ben Spies followed up his previous race win at Assen with a solid fourth place outing, while the fourth factory Honda rider Marco Simoncelli managed to stay out of trouble and round out the top five. Dani Pedrosa, back in action after missing three races due to injury, placed eighth.

Lorenzo was clearly very happy with his performance, saying after the race, “I pushed and tried to be there with all of my heart. I tried to overtake Andrea in the downhill at the chicane and then I did the same with Casey because I thought it was the perfect corner for it. Now we have a competitive bike and I hope to keep this pace. Now I am more motivated and confident for the future after this great result.”

The next round takes place July 17 at Sachsenring in Germany.