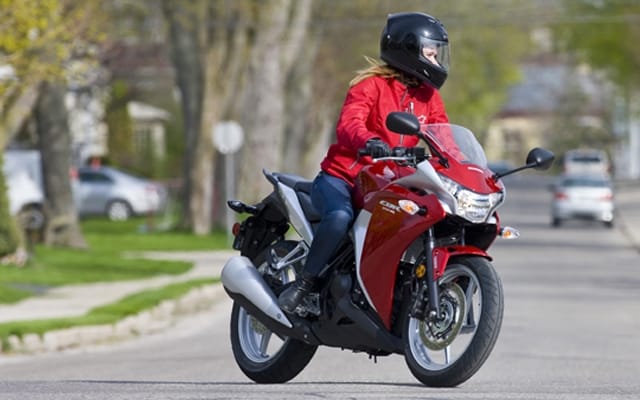 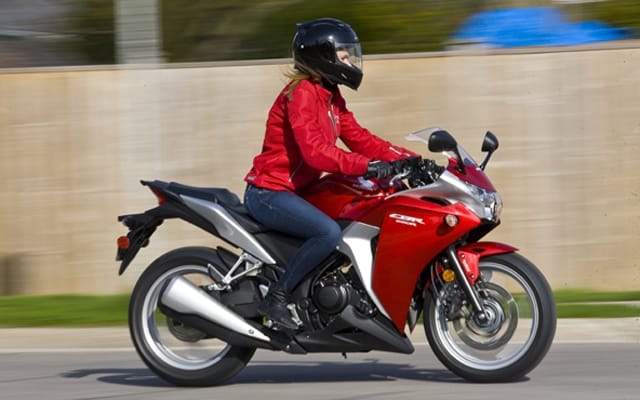 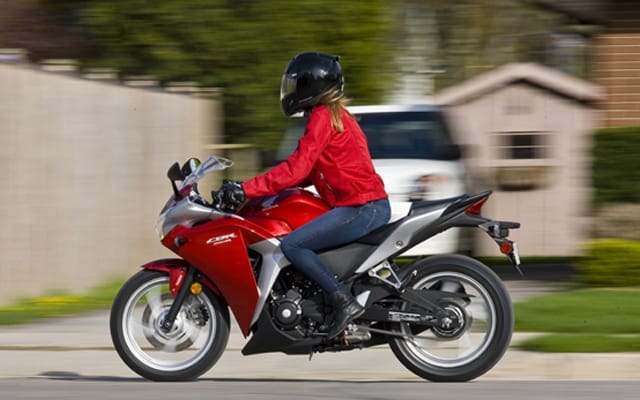 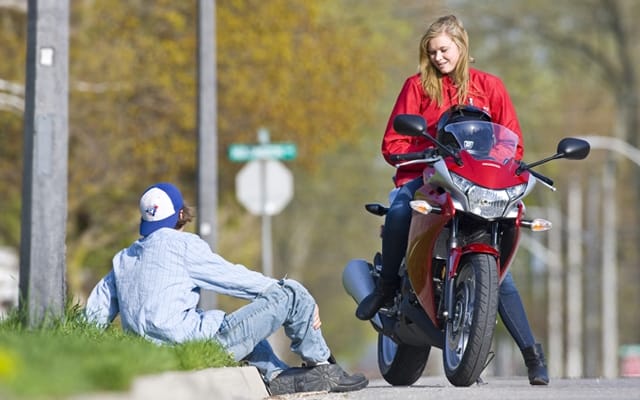 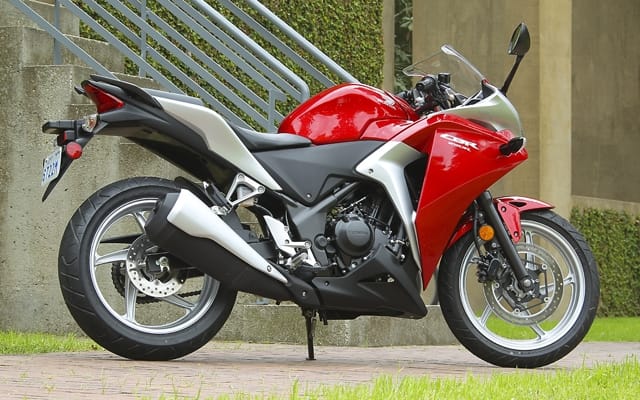 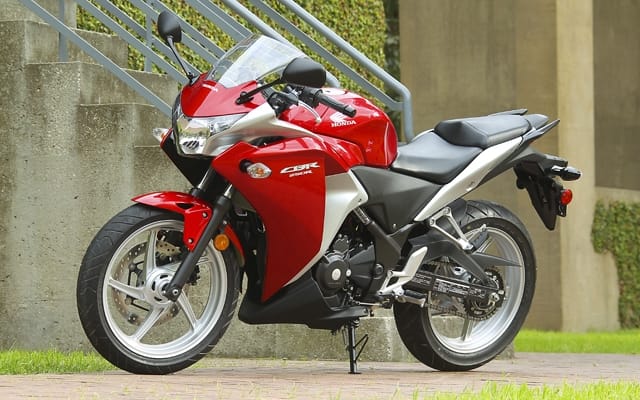 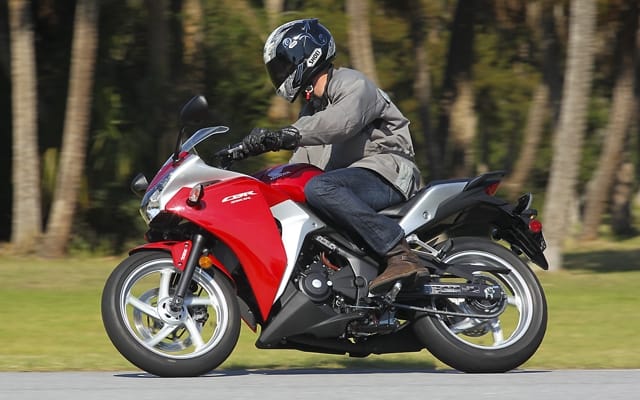 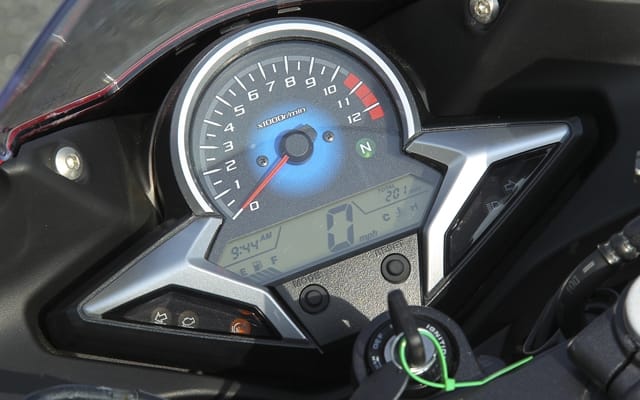 Small motorcycles are making a comeback. New and old bikes are running wild in the cities and smallest towns. This summer we hop off the fence and join in.

We (when I say we I mean magazine staffers and our merry band of contributors) don’t often unanimously agree. And that’s good. Tension — at a low level, before knives are withdrawn from drawers — is a healthy catalyst for creativity. But when we discussed potential motorcycles for our long-term tester for the summer of 2011, only one motorcycle was seriously considered. In harmonious agreement we selected the Honda CBR250R.

We’re guilty of climbing onto the “small motorcycles are the future of humanity” bandwagon just like the other bike rags have done. But some of us have privately held doubts about the viability of little bikes over the long term. They’re cute, easy to handle, reasonably priced, and here, in traffic-choked Toronto, can be parked for free. But are they practical over the long haul of distance and the long hand of time? We’ll let you know at the end of summer.

Michael Uhlarik is enthused. Michael, who probably doesn’t get out of the house as often as he should, rode the 250 at its southern California launch in heavy rain while wearing inappropriate clothing and had a wonderful time. He also believes that little bikes can do much of what big bikes can do. I don’t know if he was serious, but he claimed he was willing to ride the 250 from Toronto to Halifax. Now that it’s in print he’ll have no choice but to follow through on his boast. Neil Graham, after flogging the bike on a racetrack during a Honda press day is going to take it to a track day on his own to see if he can’t hang with the lads in the slow class.

But it only seems fitting that we should begin our summer with the 250 by going for a ride with Molly Lang, who graced our March cover. With Molly on her 250 Ninja and Neil Graham on the Honda, they set out in flat-as-Texas southwestern Ontario and frequently exchange machines. Teenagers are frank with language, and Molly, after eyeing the Honda, says that it looks “toy like.” She also doesn’t like the look of the Honda’s triangulated muffler and heat shield. “I like bright, shiny things,” she says, only half jokingly, gesturing toward her Ninja’s chromed muffler. Too often magazine hacks immediately pin themselves to the fuel tanks of small motorcycles to discover top speed. But Neil and Molly’s ride is at speeds that these bikes will normally see — on 80 km/h secondary roads they don’t exceed 110 km/h. Molly prefers the Honda’s easy clutch but finds that her small hand has trouble reaching the Honda’s non-adjustable brake lever.(Her feet are just as small — with footpegs resting just in front of the heels on her boots, her toes can’t reach the shifter or the rear brake lever. She has to remove her feet from the pegs to shift and brake.)

At a steady 100 km/h, the Ninja is revving at a vigorous 8,000 rpm, 2,000 rpm more than the Honda. Molly acknowledges that the Ninja is a “screamer” but says you get used to it. It would make sense that the Honda, as a single, would be more accommodating to newer riders like Molly at lower engine speeds. It certainly has more torque down low than the Kawasaki, but Molly finds the Honda’s throttle “twitchy” and not nearly as smooth in application as her Kawasaki’s. It’s a good point. The Kawasaki’s old-school carburetors and soft initial power delivery make it easier to launch than the Honda with its fuel-injected mill, though on the steep hills in the town of St. Mary’s the Honda climbs with an ease that the Kawasaki can’t match — it requires that more attention be paid to engine speed and gear selection. Michael Uhlarik spoke glowingly of the Honda’s build quality and attention to detail in his report from the launch, but Molly has concerns about the Honda. “It looks too small,” she says. “The Ninja looks like a full-sized motorcycle, and it doesn’t have any logos to give away the size of the engine.” We agree that the Ninja looks like a bigger motorcycle, but from the saddle it appears no larger than the Honda. Molly also prefers the traditional analogue gauges of the Ninja rather than the Honda’s analogue tachometer and digital speedometer combination. “I don’t like the digital stuff,” she says, which seems ironic since she dispatches text messages at least as often as she takes a breath.

When she rides the Ninja to high school, guys “always ask if I’ll take them for a ride.” She doesn’t, of course, for reasons of licence legality and because she can see through male grovelling. Other bikes in the parking lot at the school are mostly “farm boys on dirt bikes and a few small cruisers.” Molly curls her upper lip as she says the word cruiser. Neil asks if she thinks cruisers are cool. She gives him the look teenagers give to clueless adults. “Old guys with grey hair and pot bellies on cruisers are not appealing,” she says flatly. Neil is thankful he isn’t overweight. “The bike I’d really like,” says Molly, “is a KTM RC8. I like its sharp edges.”We think to caution, in the practical way that adults council the young, that it is an impractical machine unsuitable for two-up riding. But we catch ourselves before the words come out. Molly, of course, is already keenly aware of its limitations.