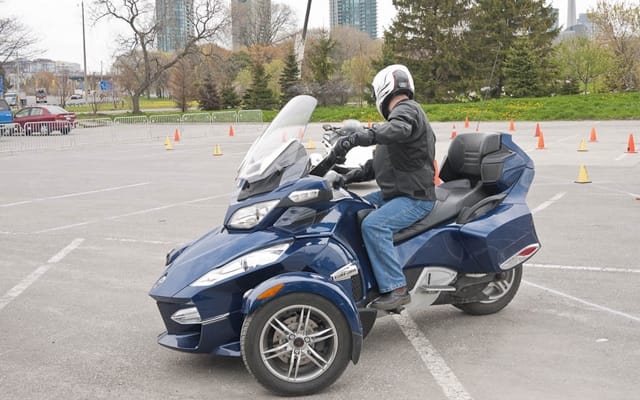 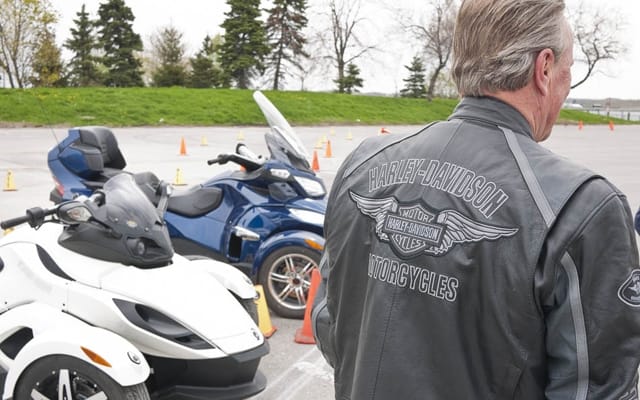 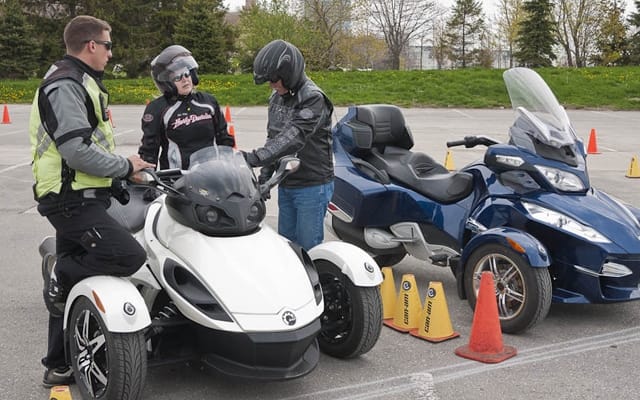 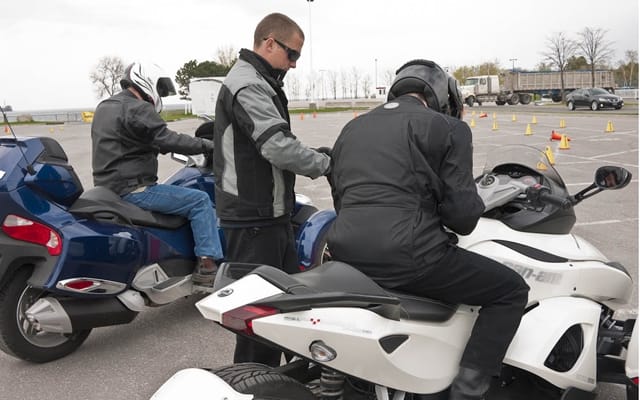 Spying on the Spyder

Steve Thornton disguises himself as everyman, drags his girlfriend along for cover, and stands in line to ride a Spyder.

Devorah thinks I’m a pussy. I could tell this by the way she talked to me. “You’re a pussy,” she said. “Why else would you ride a three-wheeler?”

But as she squirmed on the seat behind me, I could tell that the Spyder was giving her the creeps, at least in the curves, and I felt better. Later, she put it into blunt language. “It’s a candy-ass machine for people who have lost their nerve. But it can still alarm you.”

Not quite the impression the guys in the BRP trailer at the Ontario Place parking lot were hoping to convey, I imagine.

The deal was, you show up and watch a short video, sign some papers, then take the Spyder around a coned course in the parking lot to prove that you can move the handlebar when it’s time to turn and step on the brake pedal when it’s time to stop. Then you can follow the leader down the road for a while and actually feel what the Spyder does. I had never ridden one before, but was curious. BRP was putting on this demo-ride event in Toronto, so why not? I signed up on the Web, said nothing about working for a magazine, and brought Devorah along as part of my disguise.

There were a handful of the three-wheeled vehicles in the parking lot when we arrived, and two people in Harley-Davidson attire who had come to Toronto from up north and just completed a demo ride. The wife was thinking about buying a Spyder; she wanted a bike and wasn’t sure she could hold up a Harley. “Or pick up one,” I added — to which she smiled agreement. Her husband has a Harley but has little experience on it, and in later conversation, Devorah learned that he had crashed on it and earned himself a row of stitches all the way up his leg. Now his wife wants to ride behind him on a three-wheeler when they go travelling. You had to admire his persistence. And her good sense.

A BRP rep described the functions of a Spyder RT, the touring model, which is Gold Wing-like and at least $5,000 more expensive than the sportier RS model. It had an electronic shifter, no clutch lever, and just one brake lever, by the right foot. We had watched a video that described linked ABS brakes and traction and stabil- ity control systems. The video was convincing, but later, while rounding a corner on Lakeshore Drive at speed in third gear, I was not so convinced; the system applies an outside-wheel brake to prevent the Spyder from lifting its inside wheel in a turn, but it felt to me as if it was about to roll, and I let one wheel cross a painted line because I lacked the confidence to turn hard enough; despite the electronics, it just felt a little too frisky at that moment.

And yet, that was a large part of the fun of it. The video had convinced me that the Spyder would stop, would turn, and would accelerate without putting me in trouble. I could drive it into a lamppost, but the Spyder would not be to blame for it. Turning at a rate that feels as if it will upset the vehicle, braking hard enough to cause a skid in a machine not equipped with antilock brakes, and accelerating on surfaces that would let an ordinary rear wheel slip become fun, with the Spyder’s electronic assists. That is, once you learn to trust it. The vehicle turns like a car, a fact that was emphasized on a piece of paper we were required to initial. Don’t try to counter-steer this thing, it warned.

Not everyone listens to these bits of wisdom. The ride leader, who has been doing nothing but taking people for rides on Spyders for far too long, said no one had crashed yet in Toronto, but in other places, demo riders had found all kinds of ways to crunch the machines. One got off a large motorcycle and onto a Spyder and rode straight into a wall, not 10 seconds on the machine. Others counter-steered off the road or forgot that five feet wide means five feet wide.

I had no such trouble as I wound through the curving parking lot course outlined by cones, and in fact enjoyed the way the Spyder turned and stopped. I can’t say how it handles at 100 km/h, but at low speeds, it reacts to rider inputs right now. Earlier, Neil had told me to keep my eyes open for a story. “Something funny is bound to happen,” he suggested. “I just hope it doesn’t happen to me,” I countered. But nothing funny happened. The BRP guys were professional and careful, if perhaps a little tired of it all, and riding a Spyder was more fun than I expected, even though with a 100 horsepower V-twin pushing more than 300 kg of dry vehicle weight, it felt a little underpowered.

Devorah, who sat on the back and has little experience on motorcycles or three-wheeled things with engines, enjoyed the ride, though she did become a bit nervous when she felt the Spyder RT becoming light on the inside. Then again, so did I.

At lunch after the demo ride, she tried to explain her feelings about the apparent instability of the Spyder when it’s turning at speed, but I couldn’t figure out what she was saying. I let her finish, then changed the subject to something important. “So,” I said, “now that you’ve ridden with me, you know I’m not really a pussy, right?”

She looked at me for about three seconds, then smiled and took a bite of her sandwich.