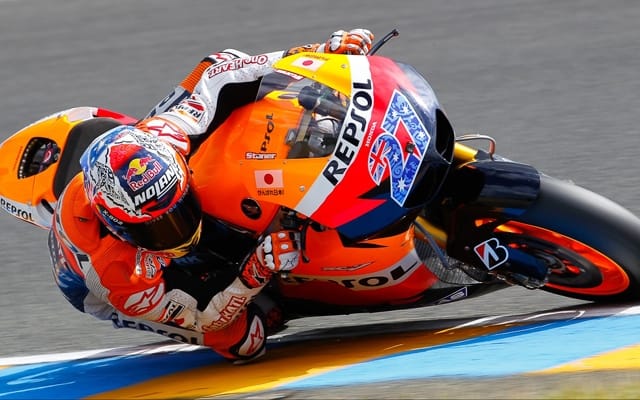 Casey Stoner earned his second victory of the season Sunday at Le Mans, his first ever French Grand Prix win. The 25-year-old Australian overtook his Repsol Honda team-mate Dani Pedrosa on the second lap and led the rest of the way, meeting the checkered flag with an impressive 14.214 second advantage over his other team-mate Andrea Dovizioso, who claimed his first podium of the season. Third place went to Valentino Rossi, earning him his first ever trip to the rostrum with Ducati.

Pedrosa had been running second behind Stoner, but crashed out on lap 18 of 28, when Marco Simoncelli made a daring pass attempt in which he collided with the Spaniard. Simoncelli was given a ride through penalty for the incident but went on to finish fifth while Pedrosa left the race with a broken right collar bone — incredibly hard luck for Dani, who after winning the last round at Estoril, was sitting second overall and  seemed to have regained his form, finally recovering from a left collar bone fracture from last season.

With his win today Casey Stoner has now climbed into second place in the overall standings, 12 points behind defending world champion Jorge Lorenzo (Lorenzo finished fourth today). But it wasn’t all good news for Stoner. The 2007 world champion was fined 5,000 for punching Randy De Puniet in the shoulder. Apparently the Frenchman got in Stoner’s way during the morning warm-up.