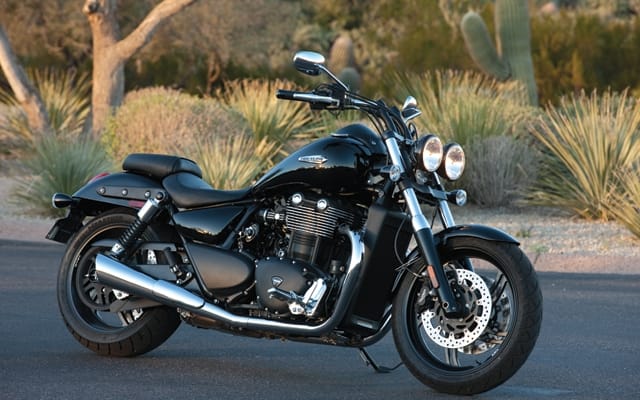 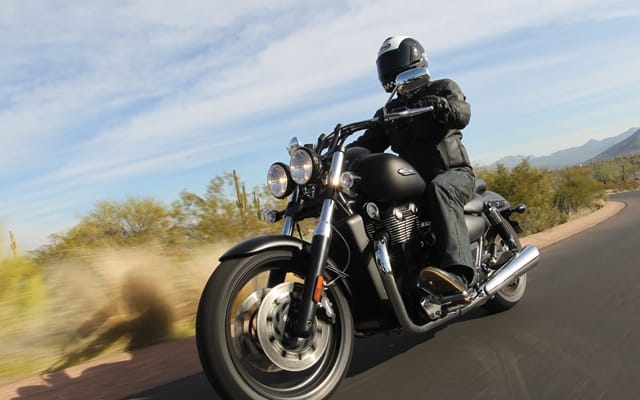 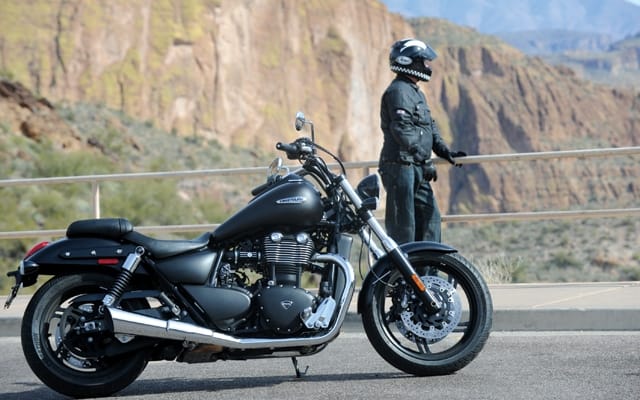 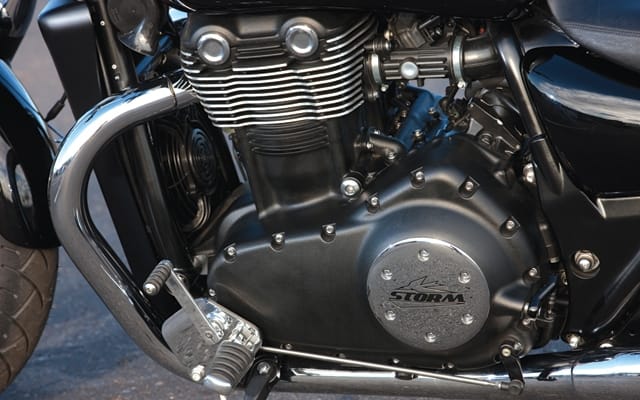 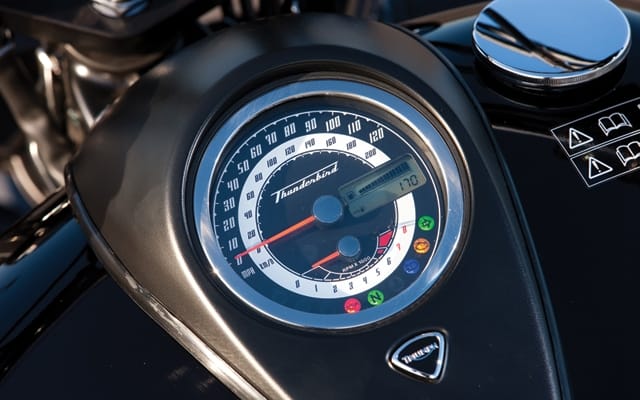 Cliches abound at the launch of triumph’s thunderbird storm. Leave it to Steve Thornton to confuse the lads with a reference from the French Revolution, which surely had nothing to do with the naming of triumph’s new(ish) heavyweight cruiser.

As journalists crowded around Triumph’s new blacked-out Thunderbird cruiser at the Radisson Fort McDowell Resort in Arizona, you could hear them jostling for headline scoops. One called dibs on “Storm Troopers,” and then another suggested “Storm Warning.” Someone who might have been feeling the blues offered “Stormy Monday,” which produced a complaint that it was only Saturday. I yelled out “Storm the Bastille!” which got me nowhere with that crowd. When Triumph execs picked a name for the dark, brooding Thunderbird they must have giggled at the prospect of motorcycle magazines slapping large-type, two-word headlines over pictures of their new heavy- weight cruiser, which they had appointed to look like a bug-eyed thunderstorm.

A name is one thing, a bit of chrome and black paint is another, and riding the motorcycle is something else. I had spent time a few months earlier with its kin, a 1,600 cc Thunderbird into which a factory 1,700 cc kit was installed, and I had been impressed by its power, handling, and comfort. Would the $16,299 2011 Thunderbird Storm have anything new to offer beyond some black paint and the headlight rack off a Speed Triple?

In a word, no. The Storm is the same motorcycle under a different hat. However, that’s not a bad thing. Sometimes in trying to improve a model from one year to the next, the manufacturer will weaken it. It’s easy to add features, add convenience, add weight, and in doing so, flatten a motorcycle’s dynamic effect. This particular Triumph has not been flattened, and in fact has been given a jolt of energy with the factory-installed 1,700 cc kit, which pumped about 14 hp and 7 lb-ft of torque into the engine of the 2010 Thunderbird that we subjected to before-and-after dyno runs (CC January). The wet weight of this Storm and the 2010 and 2011 standard Thunderbirds is 339 kg, and gearing has not been altered, so acceleration should be similar to the 1,700 cc T-bird’s.

The Storm’s engine, a liquid-cooled, DOHC parallel twin, has been changed from the 1,700 cc Thunderbird’s in appearance only: a clutch cover with the “Storm” legend is fitted, along with a few other small covers, and there is some black paint — that’s it for the engine. Other changes include taller handlebar risers that move the handgrip positions very slightly, a lot of black paint, new tank badges — and those goggle-face headlights, which are primarily what the rider notices when looking out from the seat.

The headlights, looking somewhat like eyeballs on short stalks, lend a thinning aspect to the Storm. Perhaps it’s a suggestion of skeletal form, or maybe they just draw your own eyes away from that large (22 litre) fuel tank and solid black lump of an engine, but the effect is real: those beady little things make the whole motorcycle look thinner. Perhaps there’s a suggestion in that for the designers of bluejeans. In any case, within the aesthetic confines of the long-wheelbase, low-seat cruiser form, the Storm is a handsome motorcycle.

On the road, the bike backs up the visual statement of strength with solid performance: it accelerates vigorously in lower gears; I found myself gripping the handlebar more tightly as I held open the throttle. Torque, which Triumph rates at 115 lb-ft at 2,950 rpm, is very strong through the midrange (we measured 102 lb-ft at 3,000 rpm with the 1,700 cc T-bird on the dyno).

For the first hour of our ride into the rural landscape near Scottsdale, Arizona, the air was very cool, and I experienced trouble shifting up from second through fourth gears; the way the lever felt on my foot, I might have been trying to shift into seventh (it’s a six-speed transmission). At a photo stop, I turned the bike over to a Triumph technical rep, who rode it and found no shifting problems. I was later told that the lever was poorly adjusted, which might have prevented it from fully returning to a neutral position after a shift. In any case, both the motorcycle and the ambient air had warmed up by then (whether those are factors or not, I can’t say), and I did not experience the problem again.

With the air temperature high enough that the mind could understand normal sensations, it became apparent to me that this is a comfortable motorcycle. I won’t qualify that by saying “for a cruiser,” and in fact the Storm and its Thunderbird progenitor both adhere to a modern trend of blurring the lines between cruiser and something else — naked bike, touring bike, maybe even sport-touring bike; it’s all in there, for that matter, in bits and pieces. None of those pieces comes wholly true for any of those roles, but the entirety of the motorcycle — with sporting brakes (310 mm front rotors and four-piston calipers), a sit- up-and-eat-your-pie rider posture, comfort and carrying capacity with the addition of a windscreen and saddlebags — cuts closer to each of those modalities than you might expect from a Triumph cruiser. To be completely fair, it’s an ambulance ride away from the lean angle limits of a Street Triple, so it’s not a motorcycle for all riders, but the Storm has capacities that are not apparent until you ride it.

On the road, the Storm exudes a snoring, densely muscled vibration that in normal engine ranges and especially under changing throttle feels good. Vibration reaches the rider through the handlebar, pegs, and seat, but was never harsh and only became mildly unpleasant at higher frequencies; somewhere above 3,000 rpm, I began to feel a nervous buzz in the fuel tank, which was transmitted through my knees. Complementing the vibration is a smooth bass roar, not loud enough to attract police attention, but solid and masculine.

The Storm’s seat is the standard Thunderbird seat, and it’s flat-bottomed and long enough to allow the rider to move back and forth a few centimetres. After three or four hours in the saddle, my butt and upper thighs felt a modicum of pain, but not enough to make me want to stop riding. You might appreciate the gas stop after a couple of hours of highway travel, though. The footpeg placement, in front of the rider’s knees but not far enough to stretch the legs, helps to maintain a measure of comfort while seated, and the hand grip positions are just about right, with the upper arms angled down and the lower arms angled parallel to the ground and outward a bit. It feels natural. A high speed run does result in wind on the rider’s chest, requiring a tight grip on the handlebar, but Triumph has accessory windscreens available for the Thunderbird, and hence the Storm, too. Having the dealership fit a windscreen would improve the pleasure of any highway ride, but also would add the bike’s two-year warranty to the accessory, which would otherwise get a one-year warranty.

Suspension consists of a 47 mm Showa fork with 120 mm of travel and a pair of Showa rear shocks with preload adjustability and 95 mm of travel. It’s the same as found on the standard T-bird, and it works well enough for this kind of motorcycle, controlling the bike’s movement over road bumps and soaking up the harshest of the disturbances. For one photo session, I invited a female journalist to share the bike with me, and about 10 minutes later she told me the passenger seat was comfortable, if a bit narrow.

Our riding that day was spent on a number of motorcycles, two of which were 865 cc models aimed at novices, shorter riders, and women; these bikes felt more limber and flexible (in terms of usage, not frame material) than the Storm. They also influenced the way I reacted to the 1,700 cc heavyweight: the Storm felt comparatively solid

and heavy, though not dull in response. It’s a big bike, and a heavy one, but it’s well-sorted and powerful. After pausing at a red light late in the day, I accelerated away on an 865, and a second or two later another rider shot past me on a Storm, accelerating with a quantity of force that I could only envy; it’s quick off the line. I also found the Storm to be an easy-handling motorcycle at parking lot speeds, and when turning tight circles quickly, it managed to develop a decent lean-angle before scraping pegs.

But it’s also a very heavy motorcycle — 746 lb with gas and oil — and while the suspension and brakes are up to the task of controlling it, a motorcycle with these proportions can get out of shape quickly if asked to go beyond its limits. Those limits are reasonable, especially for a cruiser, but this is one motorcycle that should always be considered with respect, just as a wise sailor would treat its namesake when signs of approaching trouble crimson the distant morning air.